Earlier this year we joined Anonimo on one of their sailing experiences where we also had the change to try the Anonimo Nautilo Nato collection. Last week they presented a limited edition of the Anonimo for the G32 Racing Tour. This watch is based on the Nautilo Nato but comes in a special package with an additional rubber strap and engraving in the caseback. Have a look at the Anonimo NAUTILO GC32 Racing Tour Limited Edition. 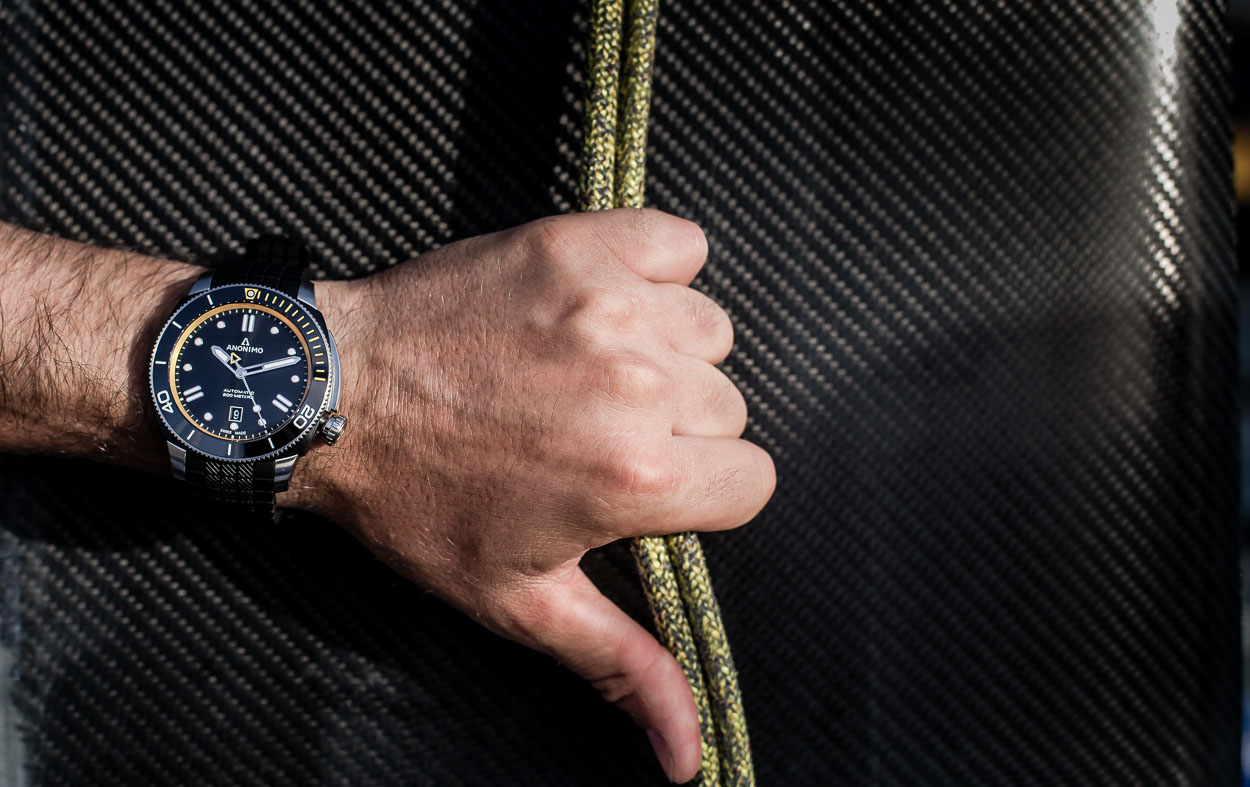 Earlier this year, during the summer there was the “Anonimo Speed Challenge” where King Felipe VI of Spain presented the price ceremon in person. During this event Anonimo announced the special edition for the GC32 Racing Tour. Who is the organizer of these speed races. And now it’s done and last week the new NAUTILO GC32 Racing Tour Limited Edition is unveiled at the Corsican stage of the GC32 Racing tour in Calvi.

The crews arrived this week ahead of the penultimate stage of the GC32 Racing Tour 2017 for the GC32 Orezza Corsica Cup which takes place from the 13th to the 16th September. This is the first time in 10 years that Calvi has welcomed a major sailing event. Given the weather forecast and the flat water of the Bay of Calvi, a new record could be established for the “ANONIMO Speed Challenge”, the flying speed runs of monotype catamarans. 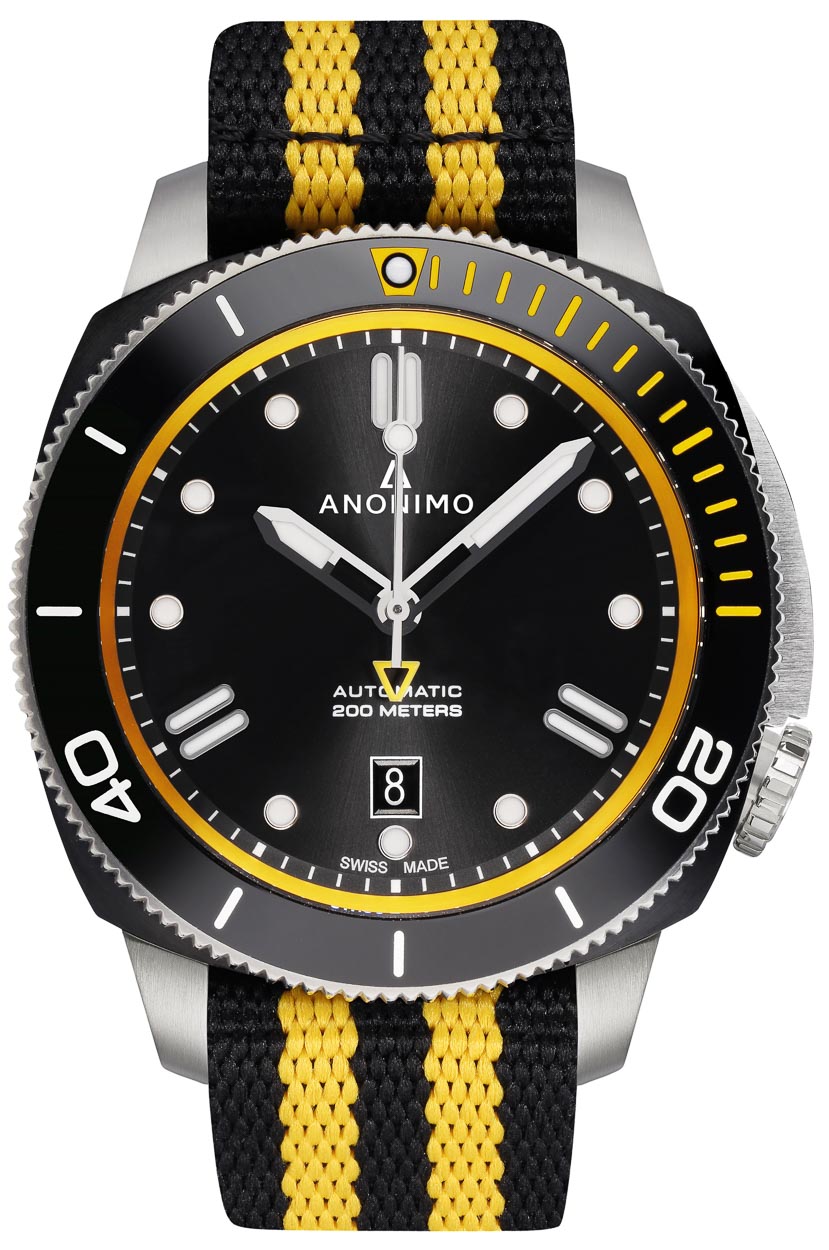 The new edition of the NAUTILO GC32RT is ready, too! A dominant yellow and black, the dive watch sports the colours of the GC32 Racing Tour and is water resistant to 200m. Limited to just 17 pieces, signifying the year that the “Anonimo Speed Challenge” was launched, the yellow is found on the NATO strap, the counterweight of the seconds hand and the marking of the ceramic bezel. A special engraving on the back has been carried out and each piece is numbered.
As with the entire NAUTILO collection, this “Diver” is equipped with the robust automatic movement Sellita SW200-1, kept perfectly dry thanks to the watch being water resistant to 200m. With its 44.4 mm case of brushed steel and DLC, it is impressive with its go anywhere look. The NATO strap in black and yellow or a more sober second strap in black rubber, this NAUTILO transforms itself to suit your wishes. 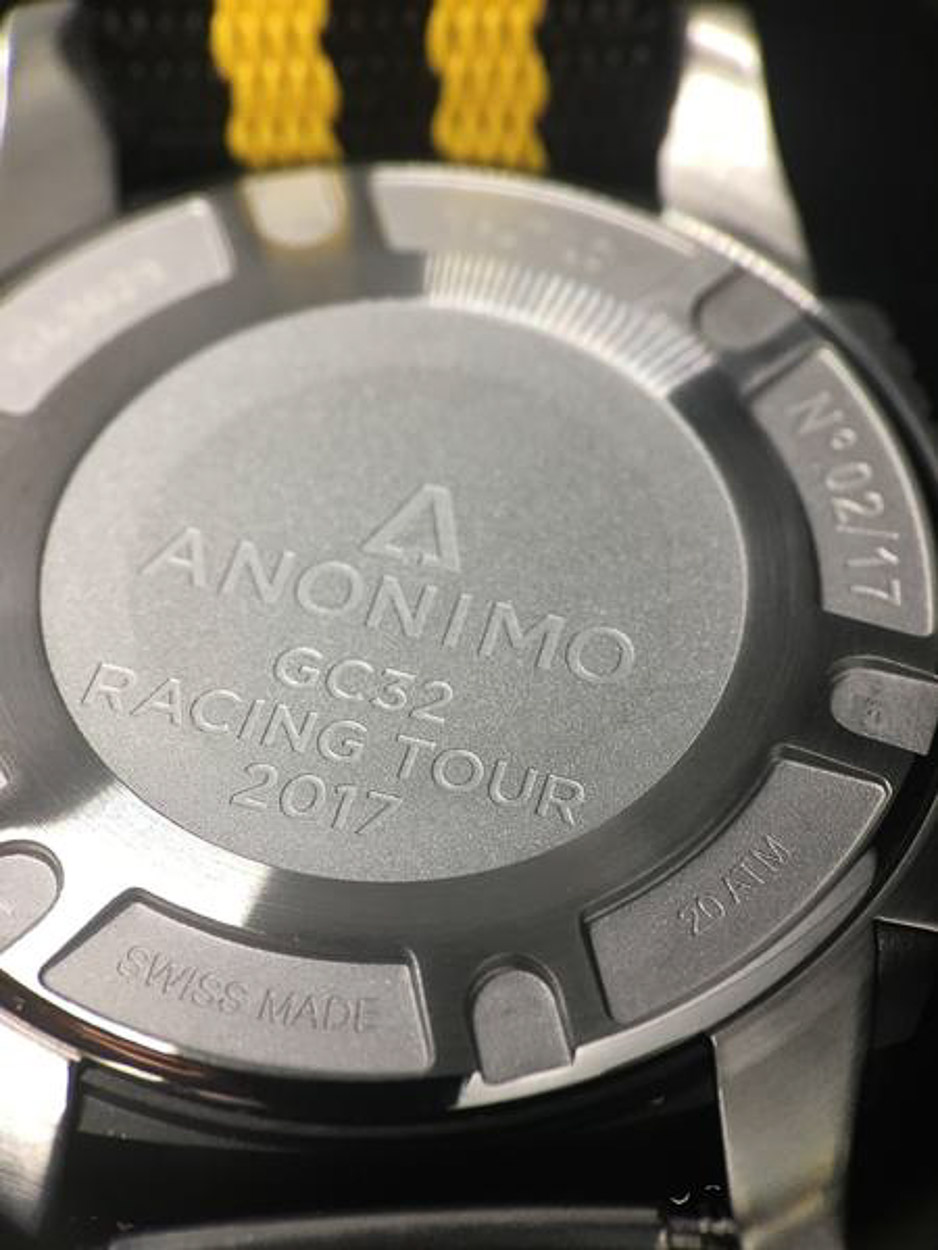 Suitable for either a sporty and attractive look, or rather more discreet and elegant outfit according to the occasion, this NAUTILO translates the ANONIMO chic sport character zord perfectly. At the end of the season, a NAUTILO GC32RT watch will be presented to the winner of the overall Anonimo Speed Challenge at the end of the season.