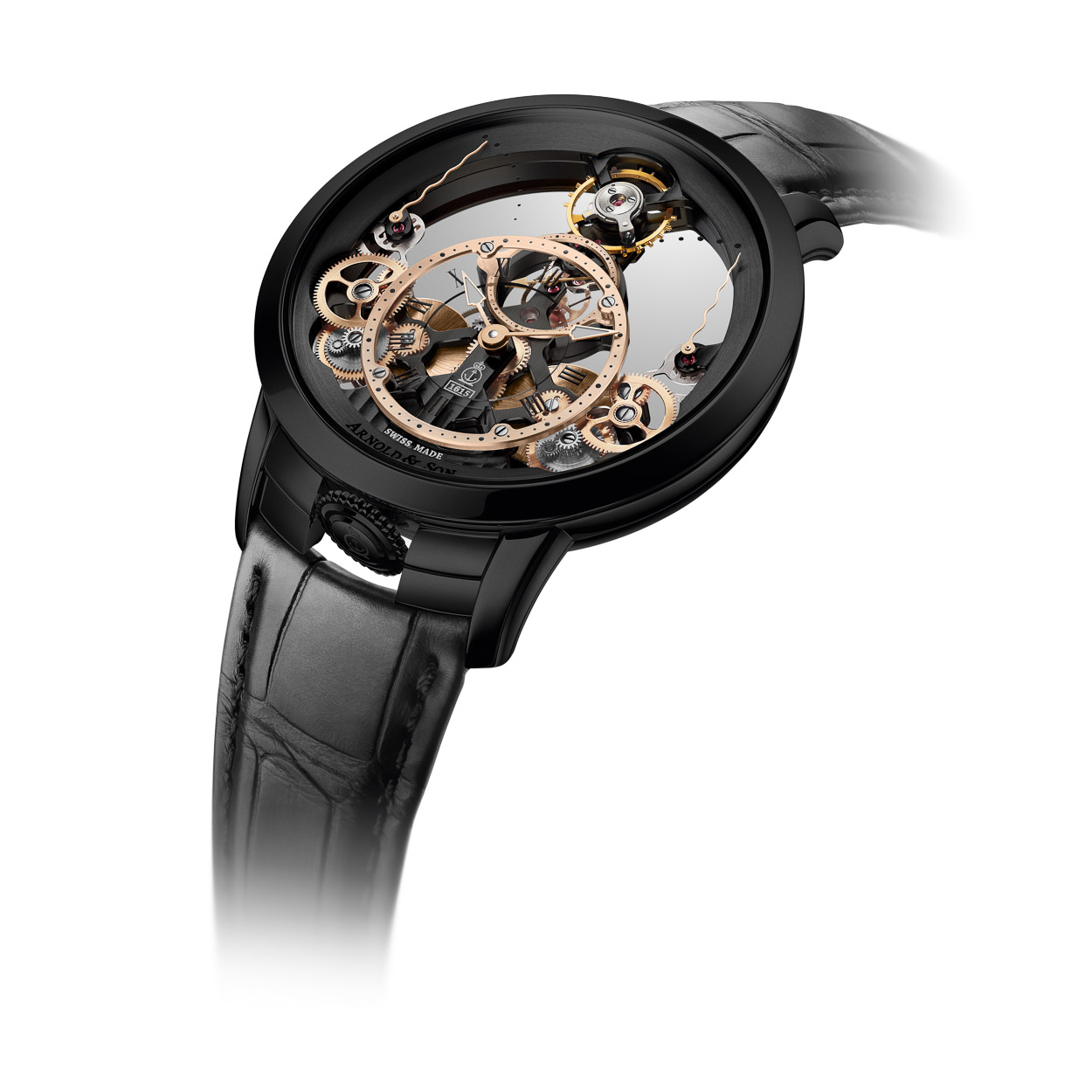 The Time Pyramid draws inspiration from the regulators built by John Arnold over two centuries ago, as well as English skeleton clocks. Originally conceived in the middle of the 19th century, such clocks showcased the mastery and aesthetical sense of English watchmakers. Besides ornamental they were functional, English skeletonized clocks were prized for their sculptural and symmetrical construction, allowing for an unobstructed view of the mechanisms.

Reinterpreting the three-dimensional beauty of these skeleton watches in a format adapted for wristwatches resulted in the Arnold & Son skeletonized caliber A&S1615. Built in a unique format, the balance wheel is positioned at twelve o’clock, and at the opposite end of the movement at six o’clock, two mainspring barrels that supply the hand-wound caliber with a whopping 90 hours of power reserve, and provide a more constant force to the wheel train.

The gear train runs vertically in a linear format connecting the two barrels at six o’clock to the balance wheel at twelve o’clock, and endowing the movement with its pyramid structure. The bridges are designed so that all of the wheels, the two mainspring barrels, the escapement and balance wheel are all magnificently visible from the dial side. 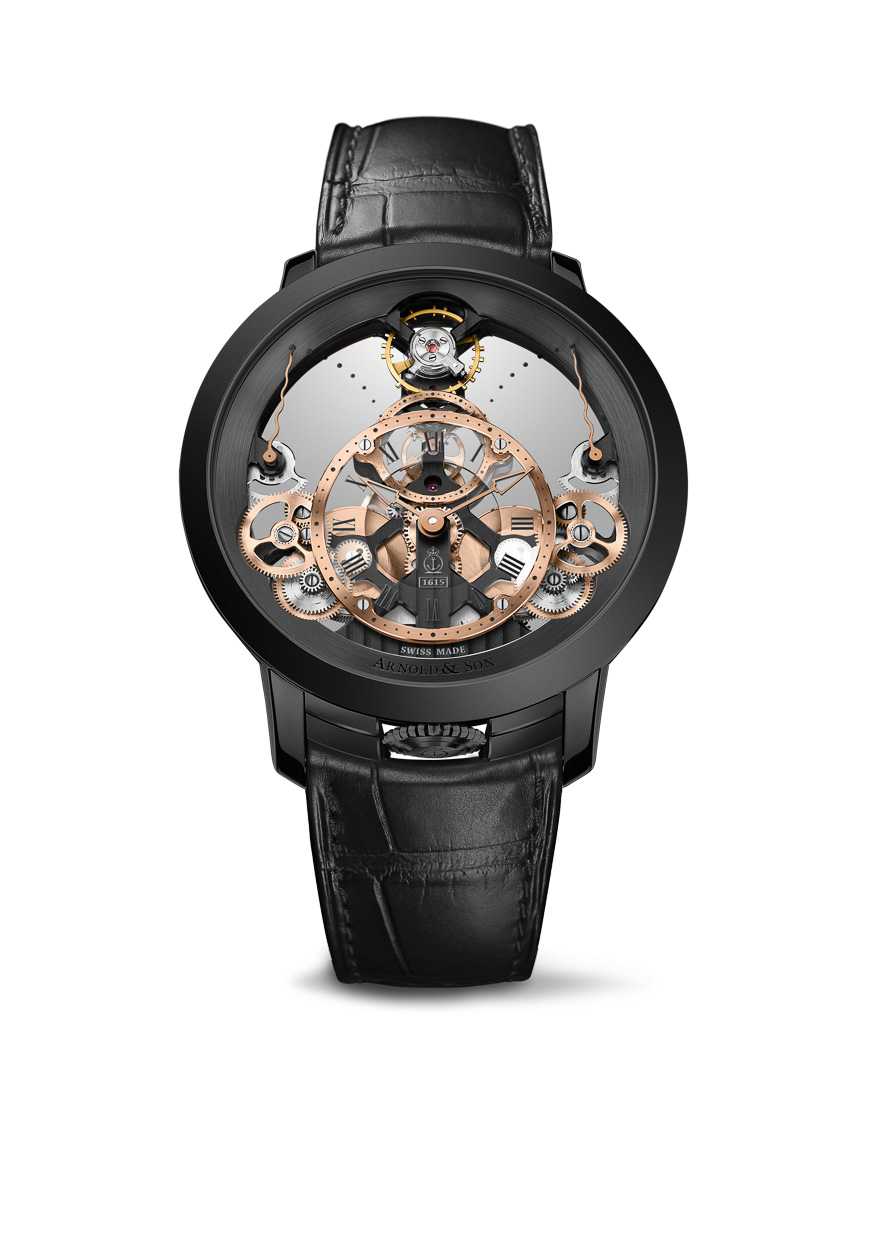 Additionally, the movement is fitted with two power reserve indicators – one each on either side of the linear gear train – to display the energy level for each barrel separately. The power reserve hands indicate the reserve level via graduated dots (that are printed under the top sapphire crystal) in an arc format, and demonstrate how one barrel transfers energy to the second one when needed.

In the Time Pyramid Black Edition, the emphasis has been placed on the moving parts of the movement. Housed in a 44.6mm Stainless Steel case with a black DLC coating, the movement has been reimagined with a blend of muted black and warm rose gold tones, highlighting the movement’s unique architecture while playing with light in a most fascinating manner. 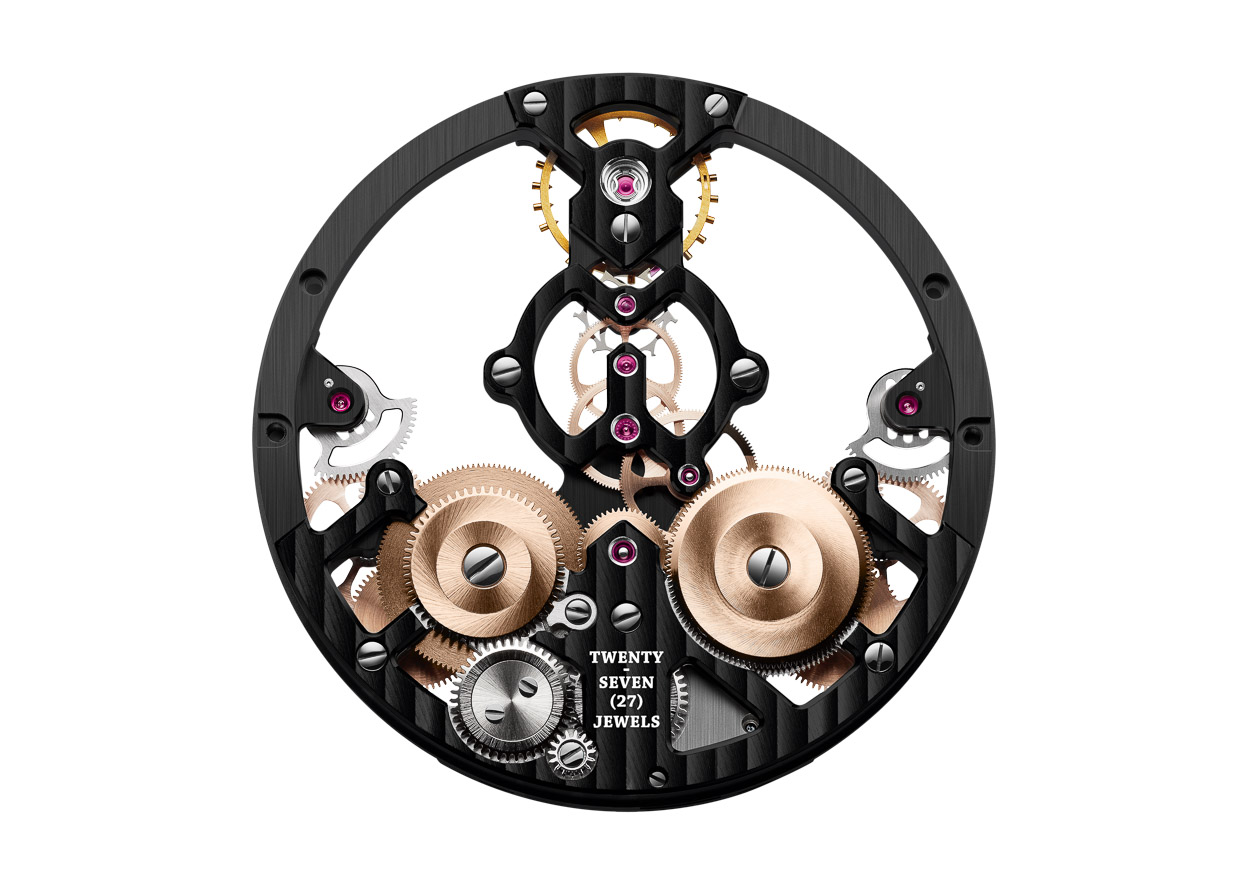 The movement’s main plate and bridges are treated in black ADLC, while still retaining classical haute horlogerie decoration such as Côtes de Genève strips and chamfered, polished edges. The various wheels of the symmetrical gear train as well as the barrels are given a rose gold treatment, as are all the hands and the frame holding the sapphire hours and minutes dial.

Completing the look of the Time Pyramid Black Edition’s dark allure, the watch is set on a hand-stitched black alligator leather strap, with a black DLC treated steel tang buckle matching the case.