After recovering from all the news that was thrown at us during the SIHH it’s time to digest what has been presented to us. As there is no right order for it we will start with the new Baume et Mercier Clifton Baumatic Collection. Being a fan of the case design of the Clifton myself it was a pleasure to see the Baumatic line presented.

In the past years price levels have shot through the roof for many watches leaving a gap for more affordable pieces. It was actually great to see more accessible prices on some of the novelties The Baume and Mercier is no acceptation to this and comes at an interesting price point. In return you get a great looking watch with a newly developed in-house movement which is a first for Baume & Mercier. Something that is likely to show up in more models in the near future.

Measuring 40mm the Baume et Mercier Clifton Baumatic is available in four standard versions and as a special COSC-certified edition. Starting at 2.300 CHF for the steel version on a leather strap or on a steel bracelet for an additional 150CHF. The most expensive version is a duo-tone which retails for 2.900 CHF. Where the magic words on the SIHH were ‘interchangeable straps’ the  Baumatic is no exception to this however it’s not done by a special construcion. On the back side of the strap you will find a small pin which controls the pushpin. Simply an effective way to change the straps which you will find on several aftermarket straps nowadays. So no need for special tools which might damage the case.

Baume & Mercier developed their first in-house movement in collaboration with the ValFleurier Manufacture and the R&D team at the Richemont Group. This new-generation movement has been named the Baumatic and goes by the reference BM12-1975A. As you can see in the image below the movement shows through the clear case-back both the movement itself as the rotor are nicely finished. The perlage and Geneva stripes are clearly visible on the movement and rotor. 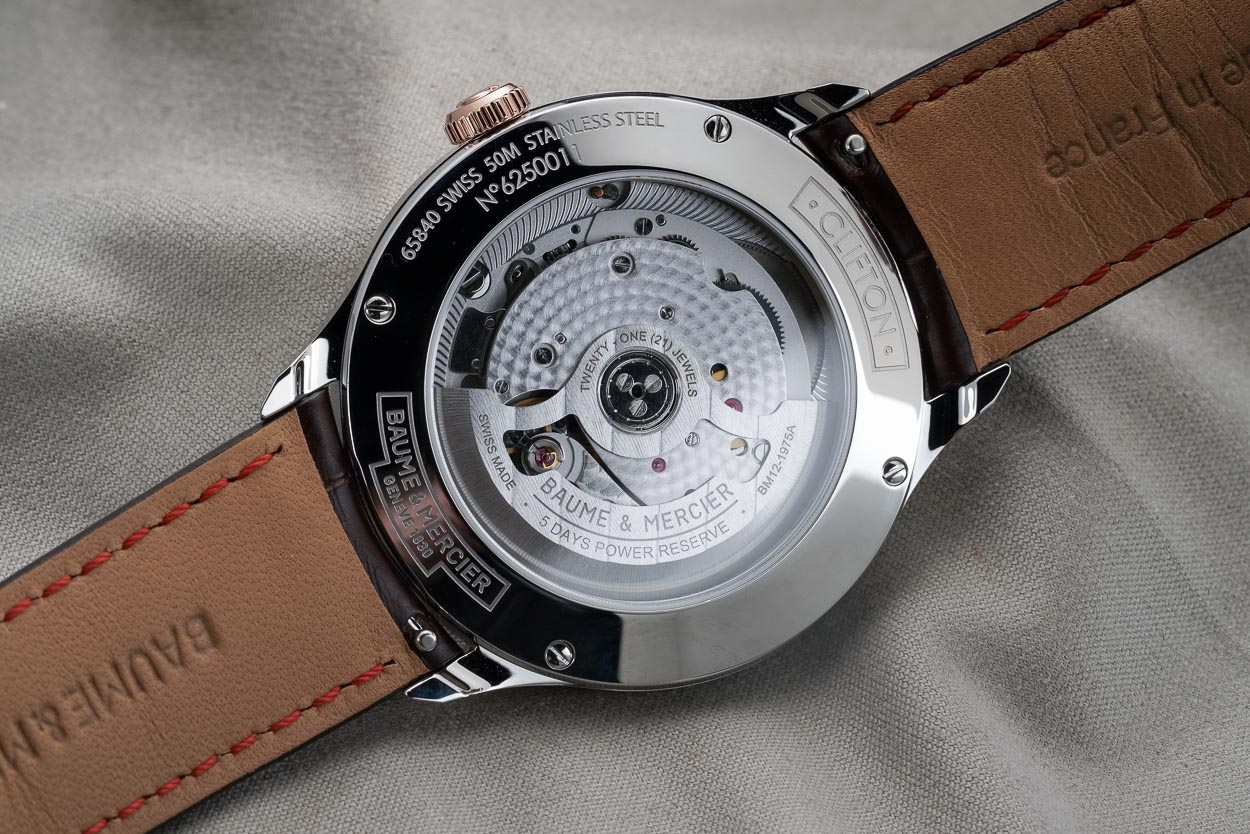 Specific features for this movement are made possible by several innovative components. These result in an increased power reserve, accuracy and reliability.  Featuring a whopping 120-hour (five-day) power reserve thanks to an optimized alloy used for the barrel, escapement and silicon hairspring. These also increase the accuracy which goes between four seconds slow and six seconds fast per day. And although all watches function within the same deviations, only the COSC version comes with a certificate.

Another important feature is the extended maintenance interval. Where the average watch should go in for service every couple of years. The Baume et Mercier Clifton Baumatic would only need a service after at least 5 years. Improved oils are the main reason for the extended maintenance. Another reason is the use of parts that are not affected by magnetic fields. Not being influenced up to 1,500 Gauss the average influences found in daily live won’t affect the functioning of the watch.

In the end the Baume et Mercier Clifton Baumatic makes a great watch at an interesting price point. It’s features show that the bar is being raised by the brand and offering you more quality at an affordable price. We like that the date window is matching to the dial colour which makes it less in your face. Our favourite is the COSC edition although in our first thoughts the JLC Geophysic popped up due to the cross on the dial. If it’s worth the extra 150 CHF is a personal thing but it would definitely be our choice.