Watchmaker Bell & Ross has, over time, become a reference in the instrument watch field. Since its inception, the brand has produced exceptional models in its dedicated pursuit of superior perfor- mance. As part of this quest, it has forged links with the world of the military –one of its key domains. Bell & Ross works regularly with professional elite units such as GIGN (Special Operations Unit of the French National Gendarmerie) and RAID (Search, Assistance, Intervention, Deterrence Unit of the French National Police Force), whose missions often depend on the strictest timing. Now they present the Bell & Ross Black Camo BR03-92. 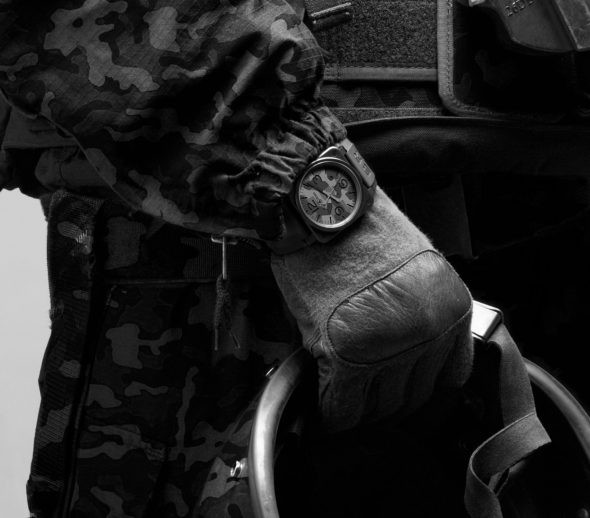 The Phantom concept, launched in 2007, and the Commando collection of 2009, fit perfectly into the professional military milieu. The launch of these watches, which are inspired by aeronautical instrumentation, heralded a foray into new territory. These avant-garde timepieces were among the first to use a camouflage coating in a horological setting.

Camouflage was first used by the army during First World War. Its purpose was to hide or disguise men or objects. Green, khaki, brown, black and grey are the most commonly used colors. The matte treatment of these colors is a mandatory condition imposed by the military.

The Phantom concept, one of Bell & Ross’ iconic collections, is now celebrating its tenth anniversary. It made a huge impact when launched in 2007, and it was one of the rst to use the full black military coating. It features an antireflective matte black coating reminiscent of the surface of a stealth plane. Its numerals, indices and hands are covered with a photo luminescent coating to guarantee legibility even at nighttime.

The Commando collection appeared in 2009, two years after the Phantom. It is part of the same lineage of avant-garde camouflage instrument watches and features a military-inspired bicolor coating. Its cases, numerals and indices are covered in deep matte black, and its dial in matte grey. This collection is aimed at the elite units, the famous military commandos, and the response teams who operate covertly.Their equipment must be as efficient as undetectable.

The new Bell & Ross Black Camo BR03-92 is the latest addition to the successful series of Bell & Ross camouflage watches. For this model, the brand has developed an original military-type tricolor coating. Its dial is covered with a patchwork of matte greys, its case and strap in matte black. This high-tech timepiece is practically undetectable, especially at night. Its matte-treated colors also avoid the risk of undesirable reflections. This means it can be worn during tailing missions or operations in hostile territory with no risk of detection. 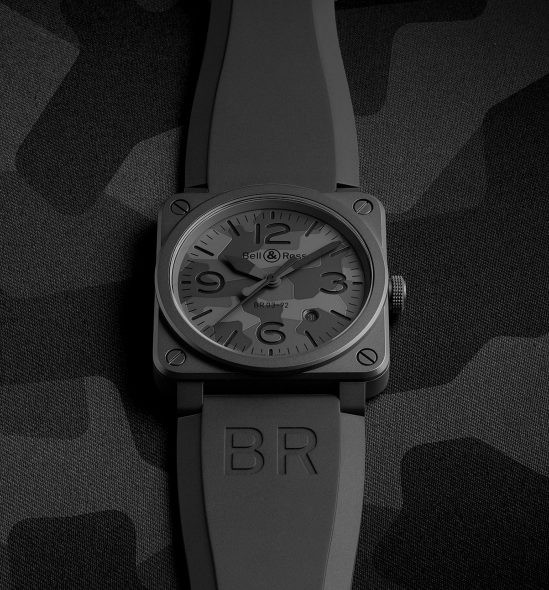 The Bell & Ross Black Camo BR03-92 retains all the amazing technical features: its display is perfectly legible both day and night thanks to the photo luminescent coating on its hands, indices and numerals. Elite units must be able to read the time easily and accurately during missions.

Driven by a highly accurate Swiss self-winding mechanical movement. It features a date function in a window between 4 and 5 o’clock. The beautiful and simple time display is based on the brand’s visual signature: large numerals accompanied by baton indices for perfect legibility. The design of the hands is also very distinctive: slender for the minutes and broader for the hours, to avoid any risk of confusion. The four large numerals (3, 6, 9, 12), impressive in both design and size, are also a Bell & Ross classic.

Featuring a case of mass-colored ceramic. Wear-resistant and unalterable, this material is second to diamond in terms of hardness. Almost scratch-resistant, ceramic is tougher and lighter than steel. It guarantees remarkable durability, which is indispensable in an instrument used in dangerous military operations. And finally, it is hypoallergenic and heats only slightly, making it very comfortable to wear even in hot weather.