A true technological and aesthetic revolution. The Girard Perregaux Bridges Minute Repeater Tri-Axial Tourbillon shows the contemporary approach to horological complications adopted by the Manufacture Girard-Perregaux. Crafted in titanium to chime with greater intensity. Housing two of the most challenging horological complications: the minute repeater and the tourbillon which simultaneously rotates around three axes. Showcasing the modern interpretation of the artisans talents which are found within the Maison. Keeping up with tradition each piece is assembled by a single master-watchmaker. Have a look at the Girard Perregaux Bridges Minute Repeater Tri-Axial Tourbillon. 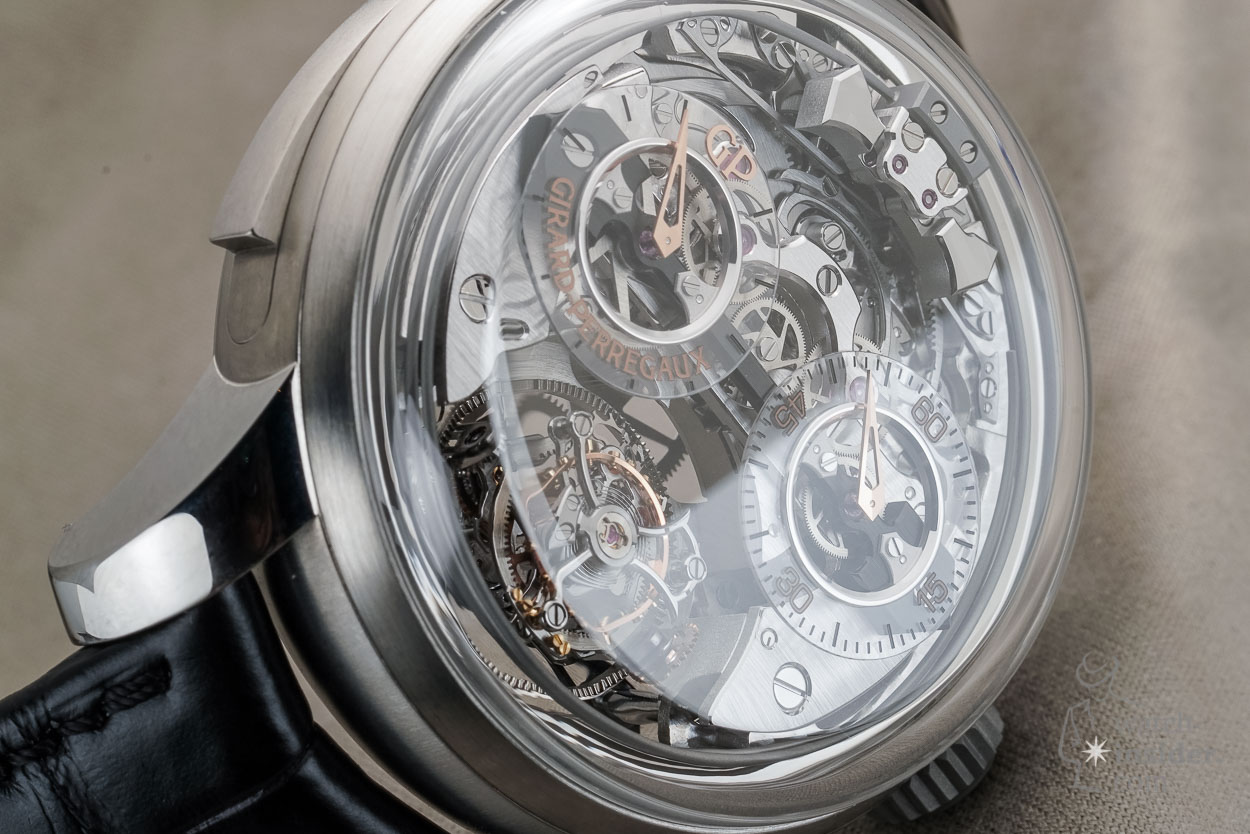 This 48 mm-diameter titanium watch, which is guaranteed water-resistant to 30 metres, unites two major complications. Right from it’s founding in 1791, the Maison displayed a penchant for watch products whose often spectacular mechanisms did far more than simply telling the time. Over half a century later, Constant Girard, decided to focus the company’s attention firmly on technical precision. He developed highly accurate tourbillon regulators for his watch models. More recently, the Manufacture provided a memorable demonstration of its mastery in the field of musical complications with a series of Grande Complication models named “Opera”.  Yet the pace is set by the Tri-Axial Tourbillon, the most sophisticated regulating organ on the market today. 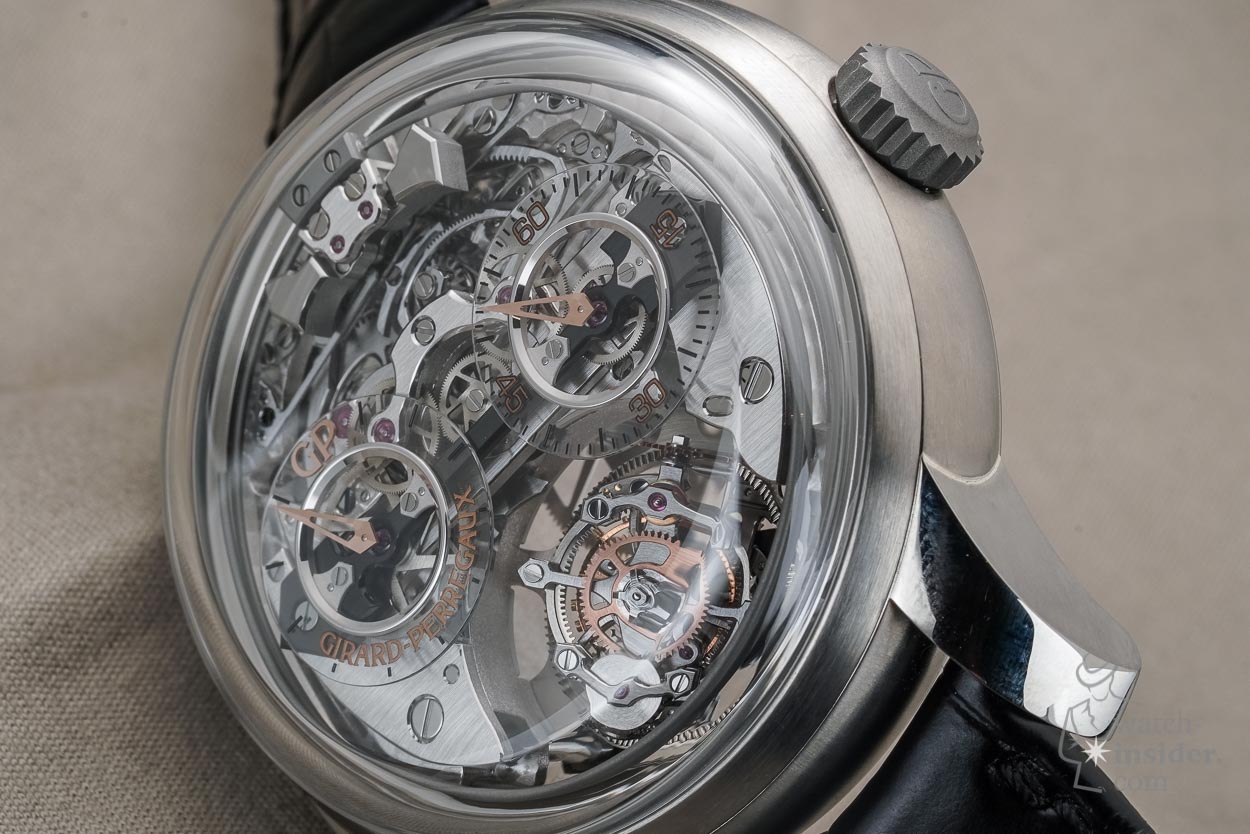 The Minute Repeater Tri-Axial Tourbillon was developed by the engineers and watchmakers of the Manufacture Girard-Perregaux. Sounding the time with impeccable precision, this fine watchmaking model was designed with an exterior to allow with maximum volume. In order to give the sound its full amplitude, the 48 mm-diameter case is machined from grade 5 titanium. This metal was chosen because the algebraic ratio between the size of the (preferably large) case middle and the density (ideally as low as possible)works best for acoustic expansion. 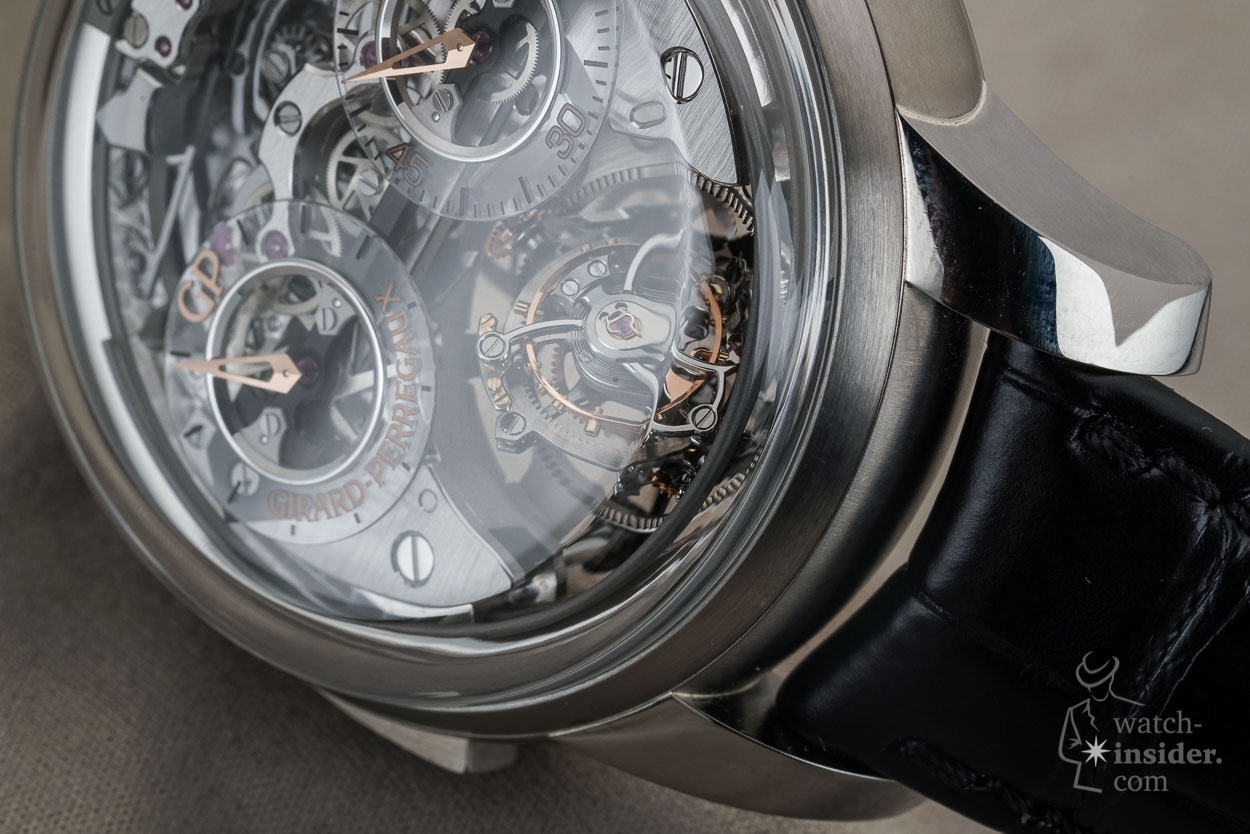 To maximise the auditory efficiency of the minute repeater, the watch’s inner diameter has been designed in such a way that the calibre makes a perfect fit without the slightest play. Thanks to this the acoustic wave can be sent out as effectively as possible. This optimised construction eliminates the need for a solid connection between the striking gong and the exterior of the timepiece. It’s also simplified for for maintenance purposes of the mechanical hand-wound movement which measures 37,5 mm in diameter. To enable connoisseurs to admire each component of this ultra-sophisticated movement, the designers have chosen to use two box-type sapphire crystals. These concave crystals which are machined with a bevel and glareproofed to improve the depth of field. Observing the mechanism from all angles, combined with the stepped calibre construction, affords a three-dimensionalview of the horological complications in operation. 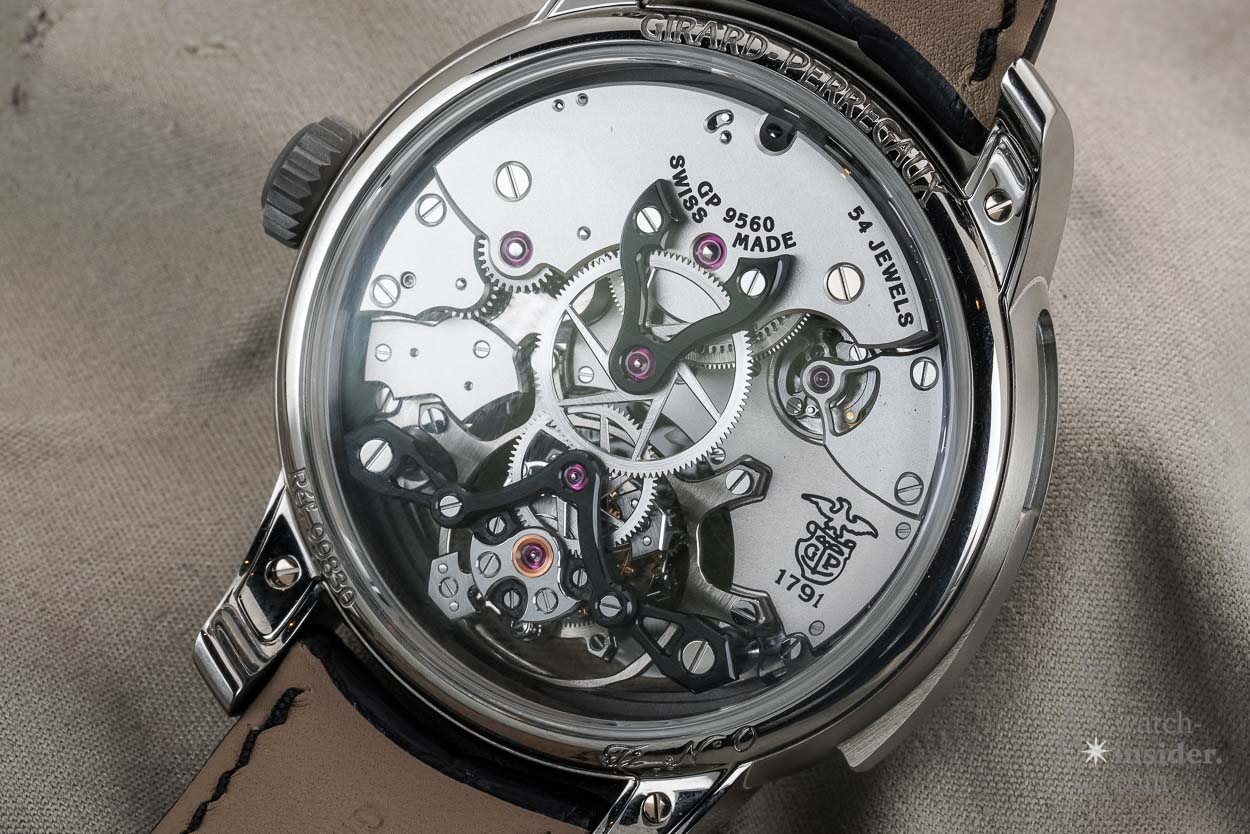 To visually highlight the operation of the hammers the designers asked the watchmakers to create an original hours display which allowed for a new approach for the dial. To free up as much space as possible they divided the space into two parts by means of a long bridge positioned in line with the winding crown. This movement part with its “long-drawn” surface and hand-chamfered ridges echoes the shape of the arrow-type bridges which are a signature of the Manufacture since 1860. The hours are shown in a sapphire dial at 9 o’clock and the minutes just opposite at 3 o’clock just like a regulator watch. It is fitted with a black alligator strap secured by a titanium folding clasp. 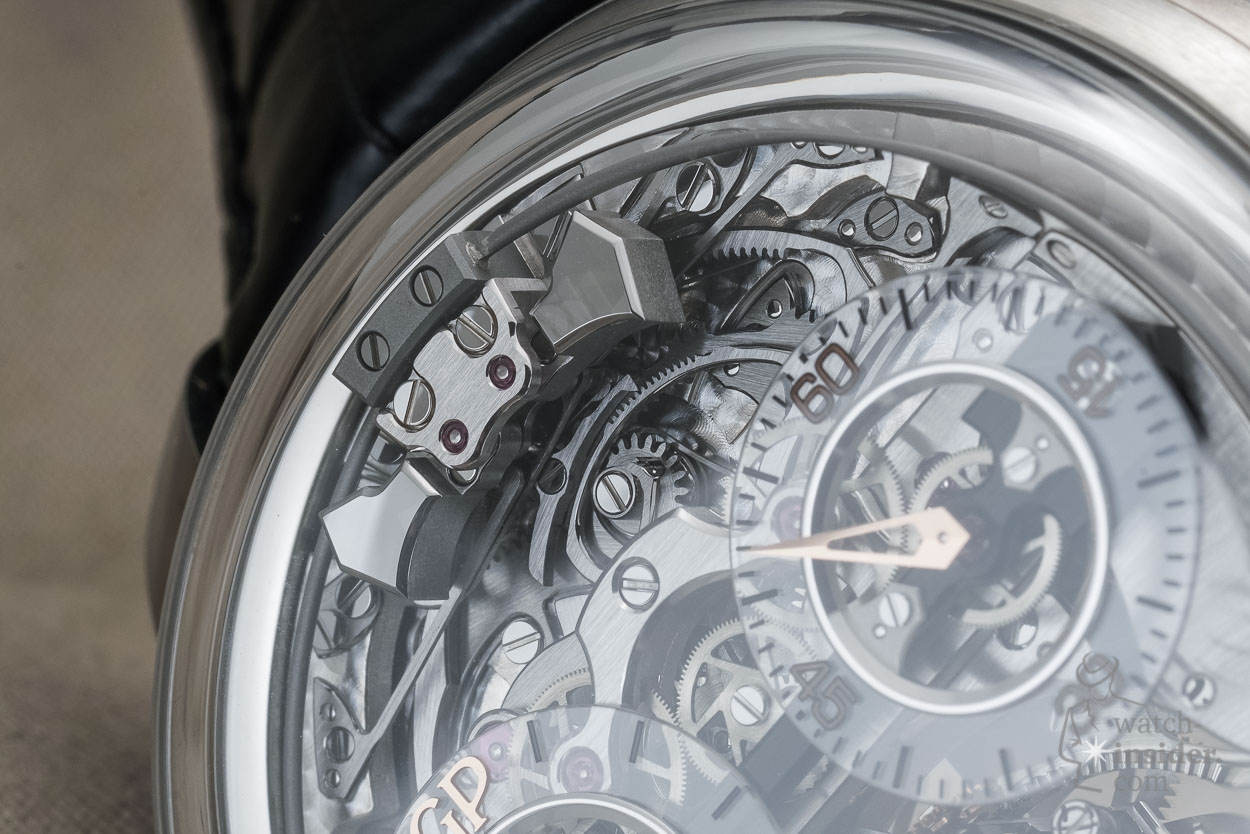 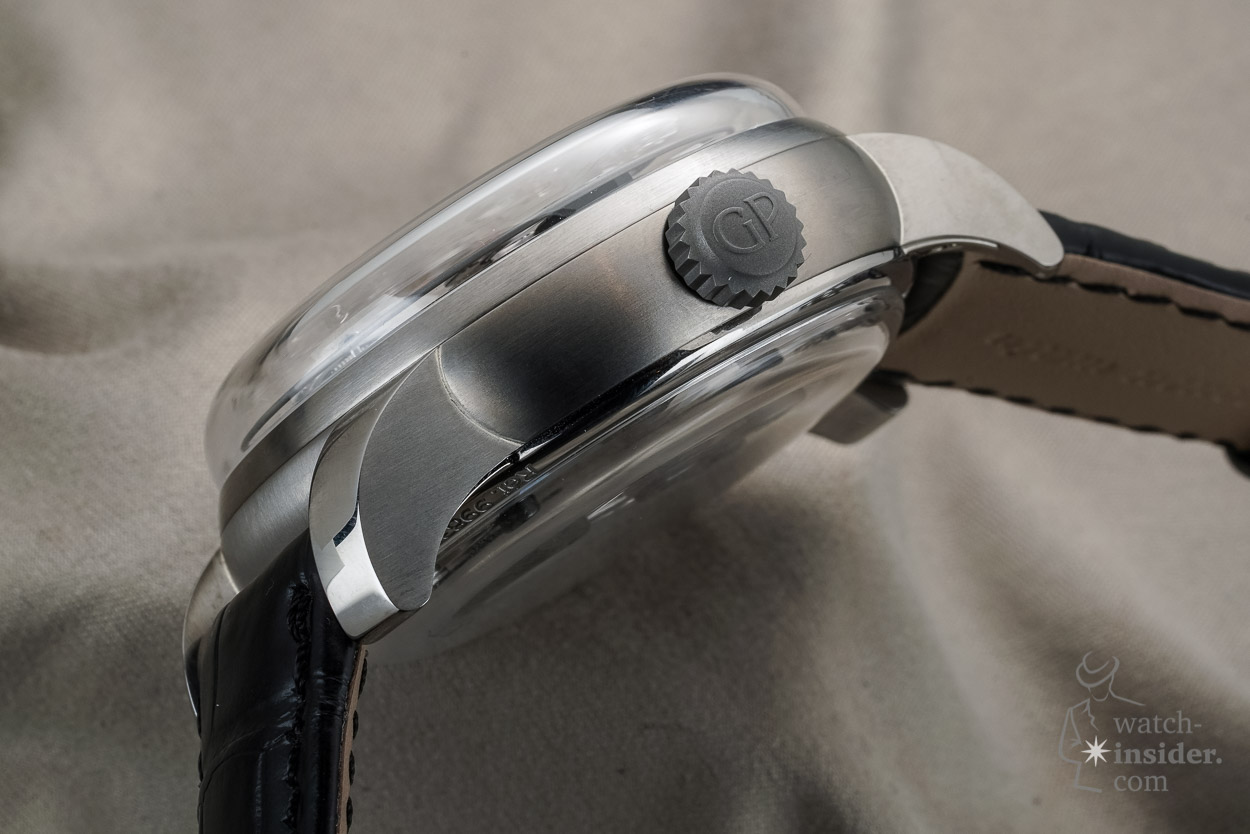 A dance swaying to the beat of a high-precision movement

To guarantee superior timekeeping precision the tourbillon has been designed to spin on three different axes at varying speeds. The purpose of this 1.24-gram carriage comprising 140 parts and performing a first rotation in two minutes. The second one in minute (the same as a traditional tourbillon carriage) and a third rotates in 30 seconds which is to enable the balance-wheel’s unbalance, an inherent factor in all mechanical watches. This enables to display the time with chronometer-worthy precision. 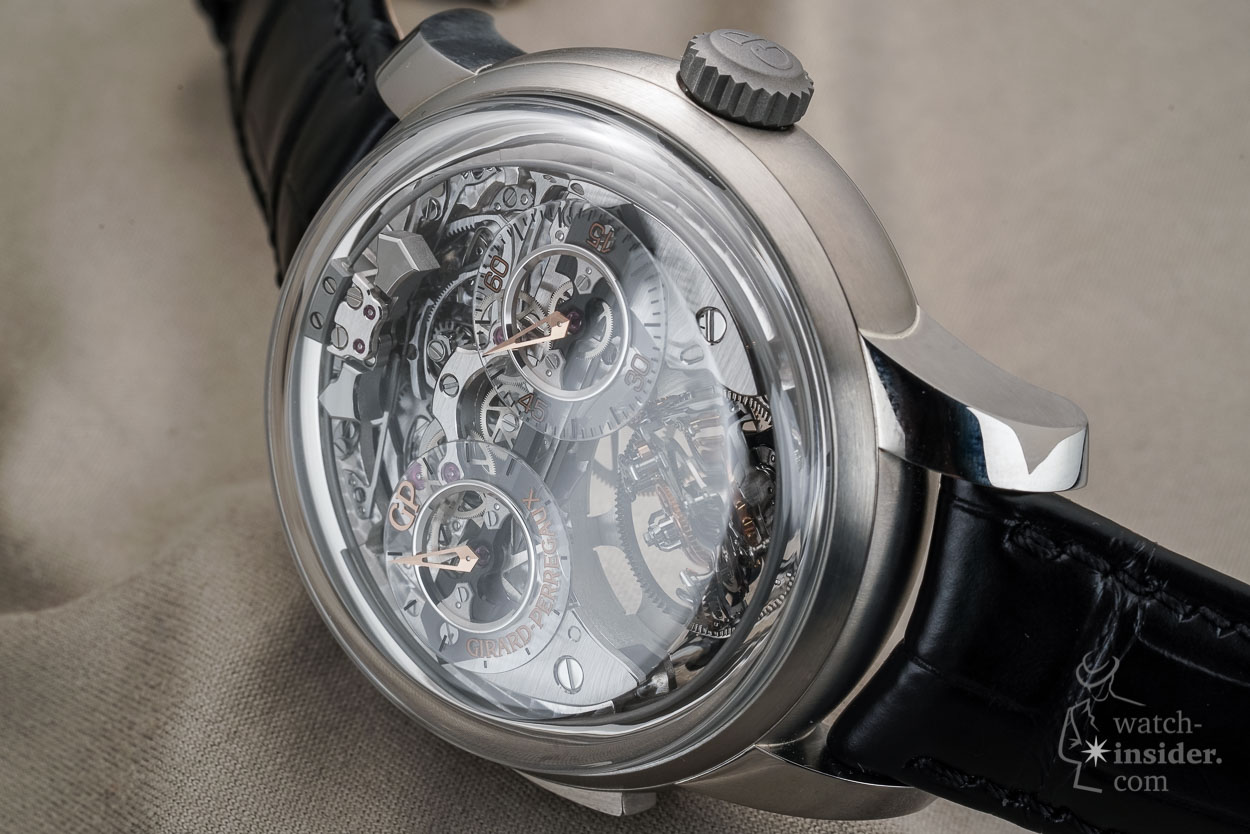