After Richard Mille presenting their watch with a sports inspired watch, Hublot brings you the golf watch which helps you to keep track of your performance on the green. The best thing is that they are able to do this at a more affordable price also. For those into golf this could make an interesting watch. With two separate pushers you can adjust the amount of strokes and the current hole you are playing. At 6 o’clock there is a display for the total amount of strokes played throughout the game. All counters can be easily reset by the tee shaped pusher at 8 0’clock. 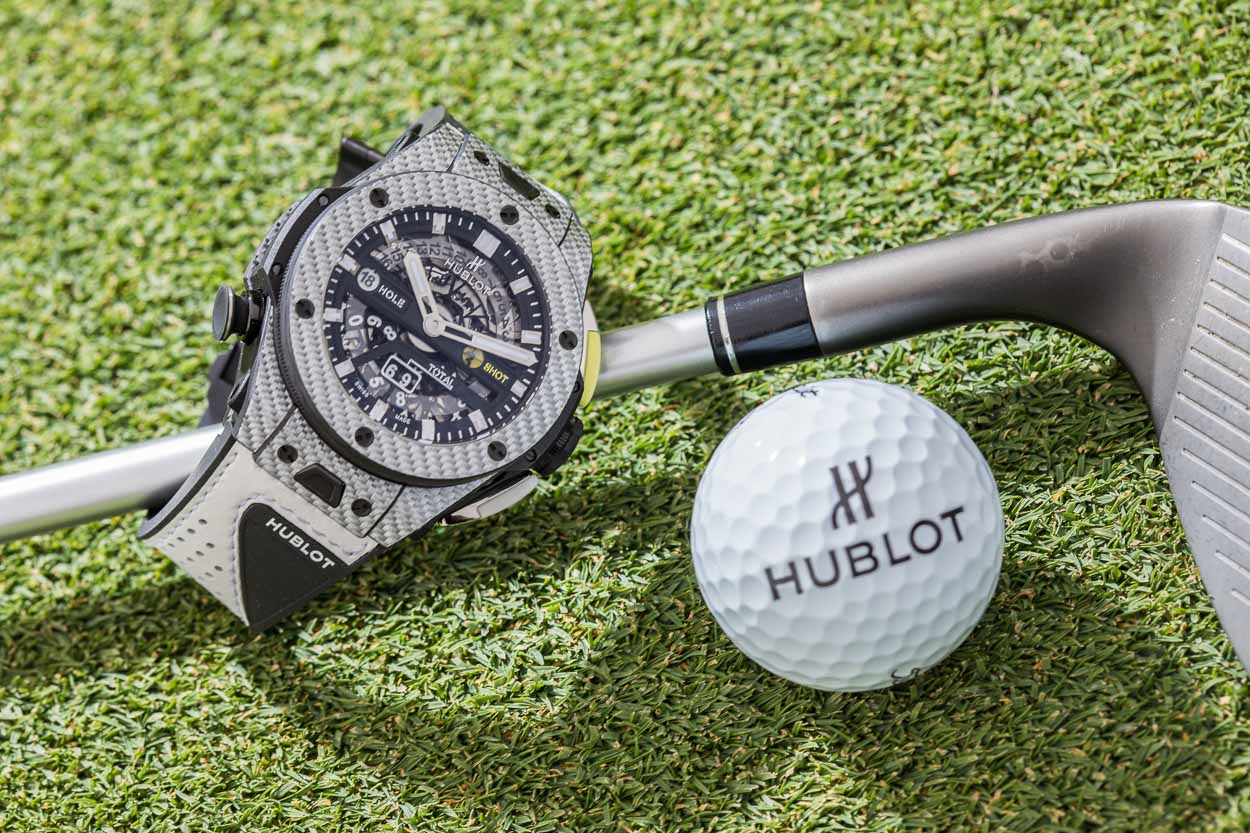 A hole-in-one for the Hublot Big Bang Unico Golf! 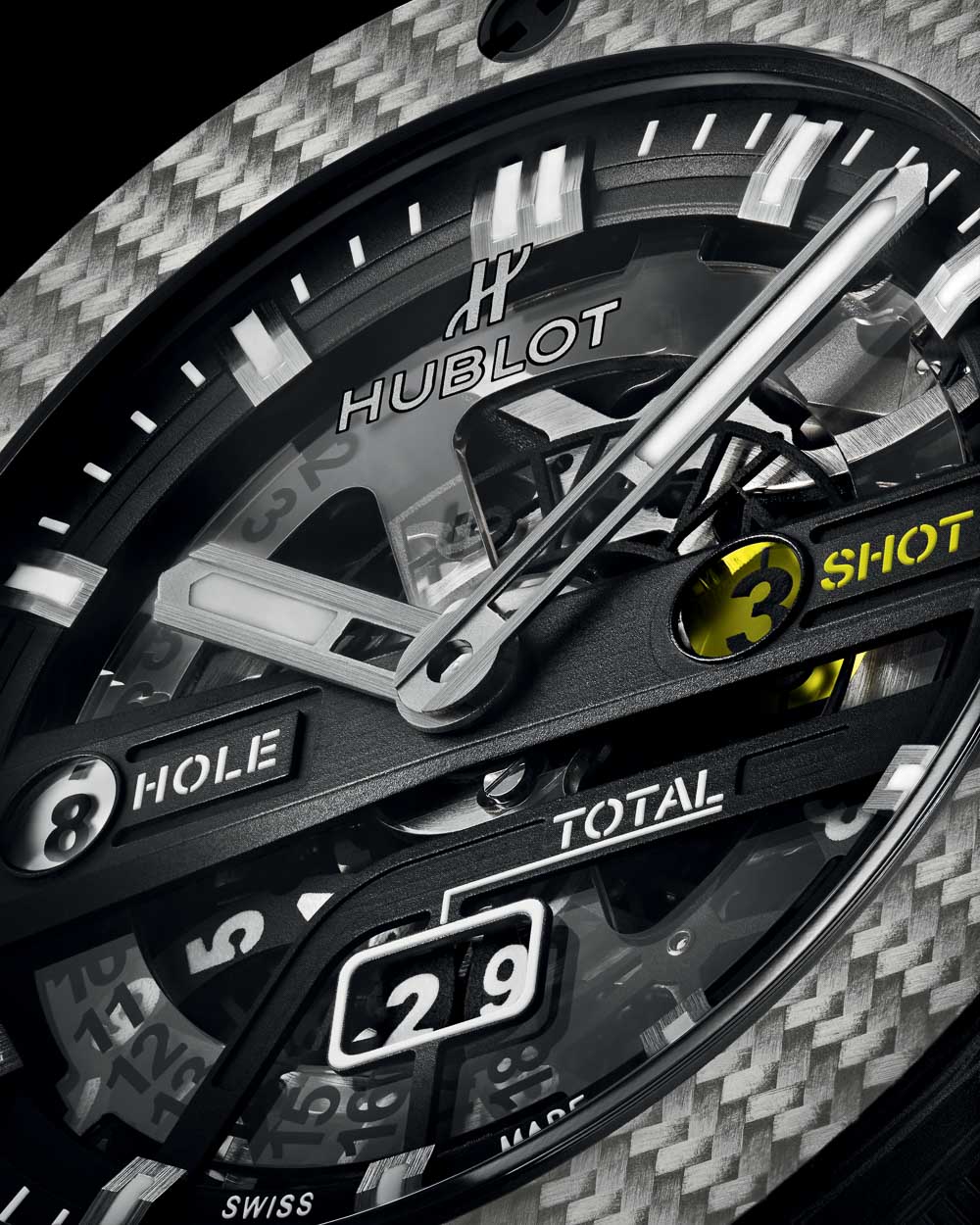 Although it measures 45mm you will hardly notice it on the wrist as the case is made from carbon fiber. In total the watch weighs just under 100 grams.

A STROKE OF GENIUS

Hublot joined forces with world #1 Golfer Dustin Johnson to unveil a watch that is dedicated to the ultimate precision sport – golf. Hublot has designed, developed, manufactured and assembled a module to equip its new UNICO movement, which has been specifically created for golf. The MHUB1580 movement allows golfers to seamlessly calculate their score whilst on course. Hublot’s mechanical golf watch features aperture displays and is ultra-lightweight, providing true sports performance. 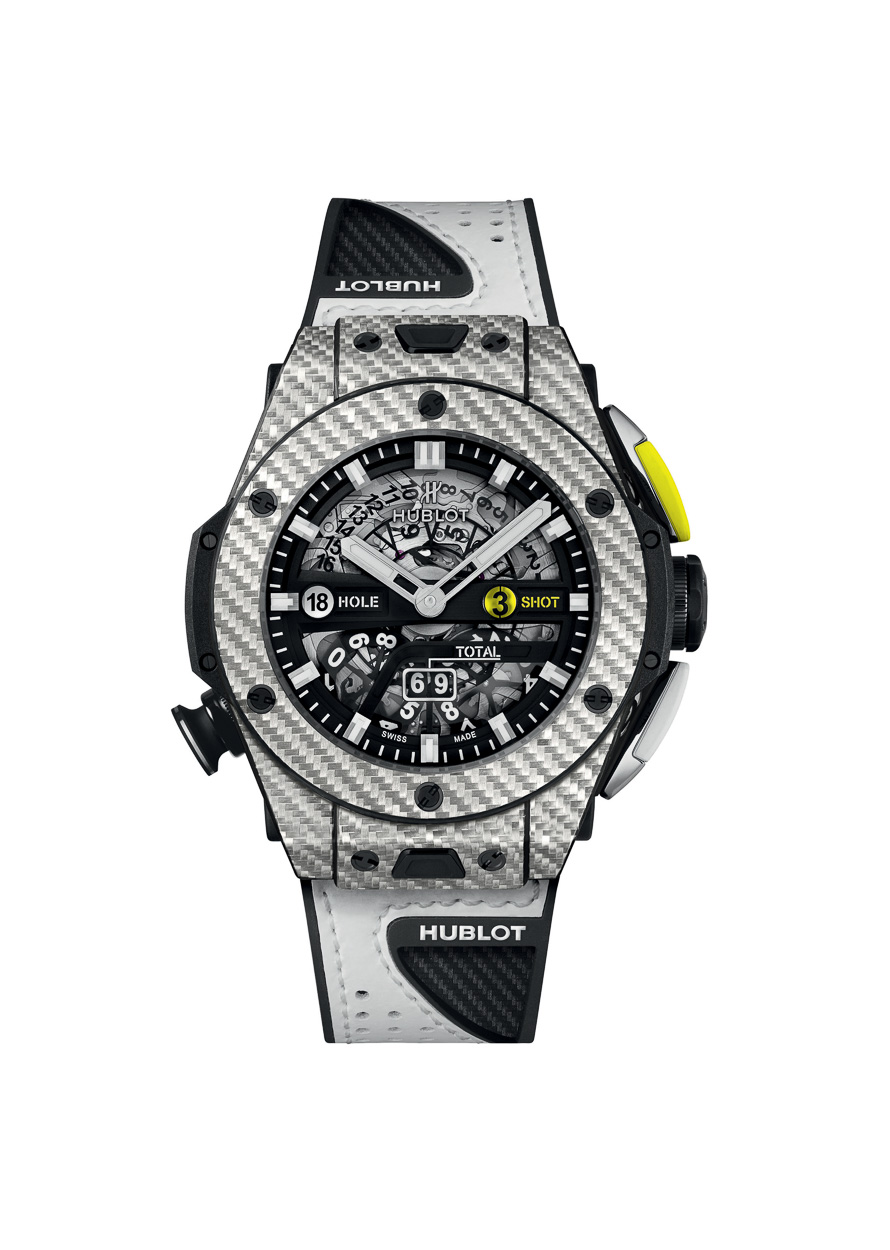 “Dustin Johnson is recognized for his perfect timing – along with power, control and precision. Golf watches exist, but they tend to be digital. His influence and impact on the game inspired Hublot’s new golf watch. Mechanically advanced, brilliantly functional, contemporary look and easy to use, it is a fusion of Hublot’s philiosophy and DJ’s signature; simple, intuitive and extremely effective. Ricardo Guadalupe, CEO Hublot

Dustin is regarded by many as a phenom in the world of golf. His style and ability have revolutionized how the game is perceived and he has been at the forefront of a new era for the sport. Hublot has done the same for watchmaking and prides itself on its pioneering approach to creating standout timing masterpieces. Together, the Partnership look set to shake up the world! They share a vision and style that are undoubtedly effective, if not exactly orthodox. Dustin and Hublot, golf and watchmaking both about precision, timing and perfection. They are the result of hard work and perseverance, pushing the boundaries and a tireless quest for excellence. Together, they are proud to unveil the Big Bang Unico Golf. A true all-in-one golf watch.

“The Big Bang Unico Golf has a contemporary design and is easy to use. It has digital displays and is very light – less than 100 grams on the wrist. It has everything that I want from a golf watch and is the perfect fit.” Dustin Johnson, Hublot Ambassador, Major Champion and World #1

Hublot carried out a real-life test by inviting its friends to measure the length of their drives against those of Dustin Johnson on a simulator. Quite a challenge, as the world’s number 1 golfer pushes the Trackman technology to the limit with his extraordinary strokes! The case of the Big Bang Unico Golf is carved from Texalium®, an innovative material, exclusive to Hublot, that is an amalgamation of carbon fiber and aluminum. This unique composite gives the watch its lightness The watch weighs precisely 97.93 grams! 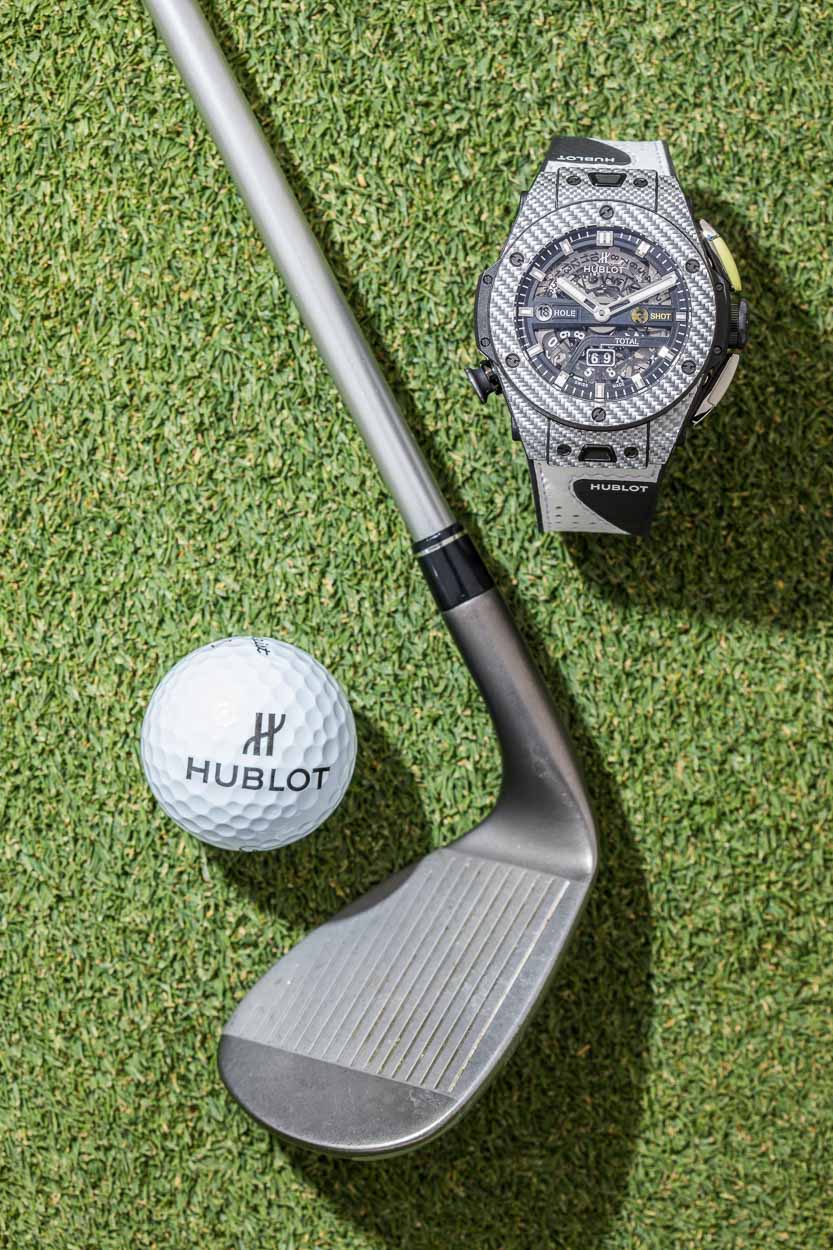 The Big Bang Unico Golf has the look of a chronograph and has been conceived as a chronograph. Its movement features return-to-zero heart piece cams that ensure the counting mechanism is robust and reliable. The putter-shaped pusher at 2 o-clock activates the mechanism for displaying the number of strokes taken and counts the strokes per hole. The pusher at 4 o’clock allows the wearer to move on to the next hole by resetting the stroke counter to zero. The counter at 6 o’clock displays the total number of strokes played and is simultaneously updated. The pusher at 8 o’clock is shaped like a tee. This resets the mechanism and sets the counters to zero at the end of the round. During the round, this button can be locked by rotating it by 45°, thus ensuring that it is not inadvertently activated. The MHUB1580 full-skeleton movement allows the wearer to admire and understand how the timepiece works. The watch comes with two interchangeable wristbands fitted with the One Click system. One is made of white leather sewn on rubber and designed like a golf glove, while the other is made of technical fabric with a Velcro fastener to ensure the watch sits perfectly on the wrist.

Last year, Dustin Johnson, more commonly known as “DJ”, entered the annals of golf by becoming a Major champion with his win at the 2016 US Open. After a series of close calls, his talent was finally rewarded with a victory at one of the game’s most prestigious events. Beyond capturing his maiden Major win at the US Open, DJ enjoyed an exceptional season, also winning the World Golf Championships-Bridgestone Invitational and the BMW Championship. As part of the American team, he secured the Ryder Cup eight years after their last triumph, in a dominating display over the Europeans. 2016 saw Johnson confirm his status as part of the game’s elite, rising to the top of the world rankings, winning the PGA Tour Money List and winning the Jack Nicklaus Trophy for the PGA Tour Player of the Year. The 33 year old has shown no signs of slowing down in 2017- confirming his position as the world’s best by winning four times to bring his career wins on the PGA Tour to 16, and adding another President’s Cup win to his resume- winning 4.5 points out of a possible 5 in the process.