Last week we joined HYT watches and Panis Barthez Competition for a day behind the scenes during the European Le Mans Series. So we travelled to the Red Bull Ring in Austria for this 4 hour race with 3 racing classes. To make it the ultimate experience we had the HYT H0 on the wrist. Located in the Styrian Alps this circuit was originally known as the Österreichring or the Zeltweg which was opened in 1969. For several years this circuit was the home of the Austrian F1 Grand Prix. At some point it was redeveloped and renamed the A1-Ring. Back in 2005 it was acquired by Red Bull’s Dietrich Mateschitz and totally rebuilt and renamed the Red Bull Ring since it’s re-opening in 2011. The European Le Mans Series founds it’s way to this superb circuit. 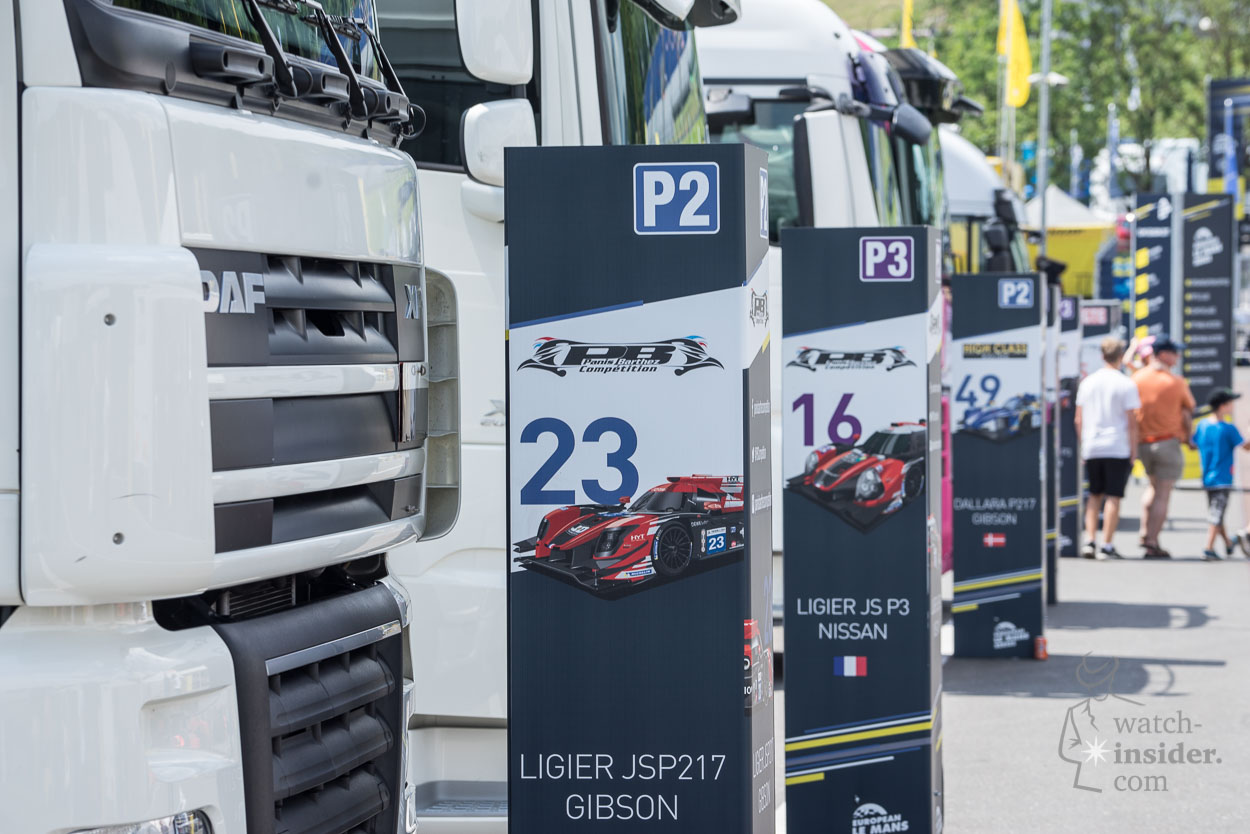 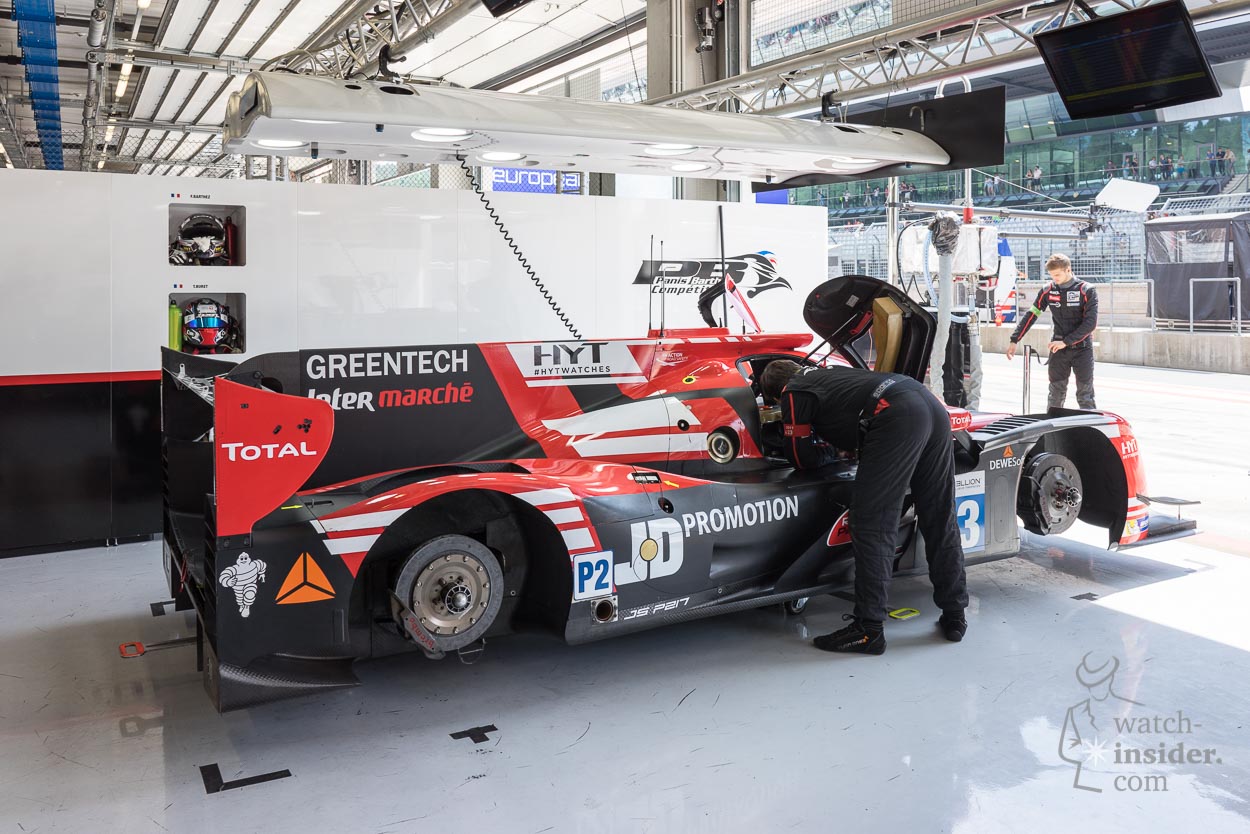 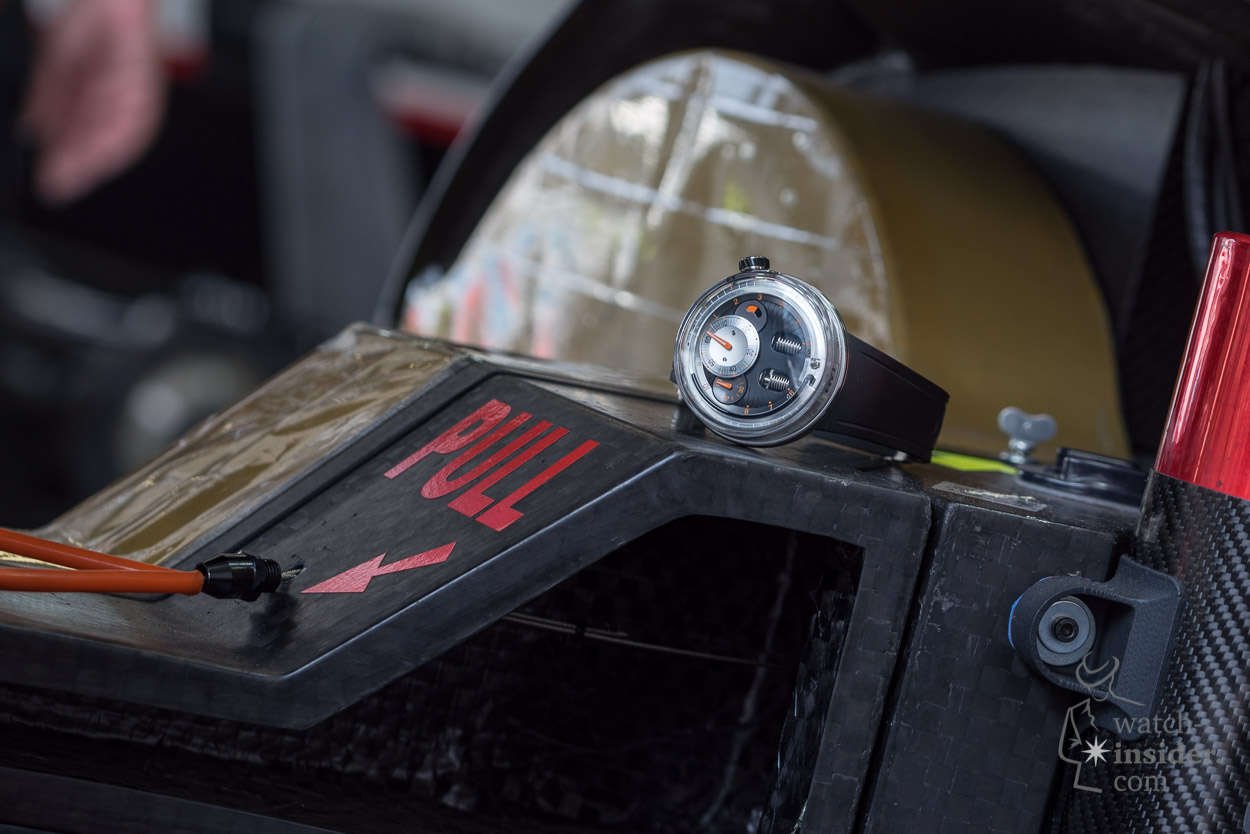 So last weekend the 4 Hours of the Red Bull Ring took place with no less than 36 cars to start on the grid. In total they covered 4764 laps of the 4.3km Austrian track which equals over 20.000 kilometres. We joined Panis-Barthez Compétition who together have achieved many milestones in French sports history. First name comes from Oliver Panis, who is known for it’s racing career in Formula 1 where he participated in 158 grand prix races. The second being Fabien Barthez, being successful in football for many years he started his career in motorsports in 2008. Together they focus on sharing their experience with their team while competing in the best way possible. 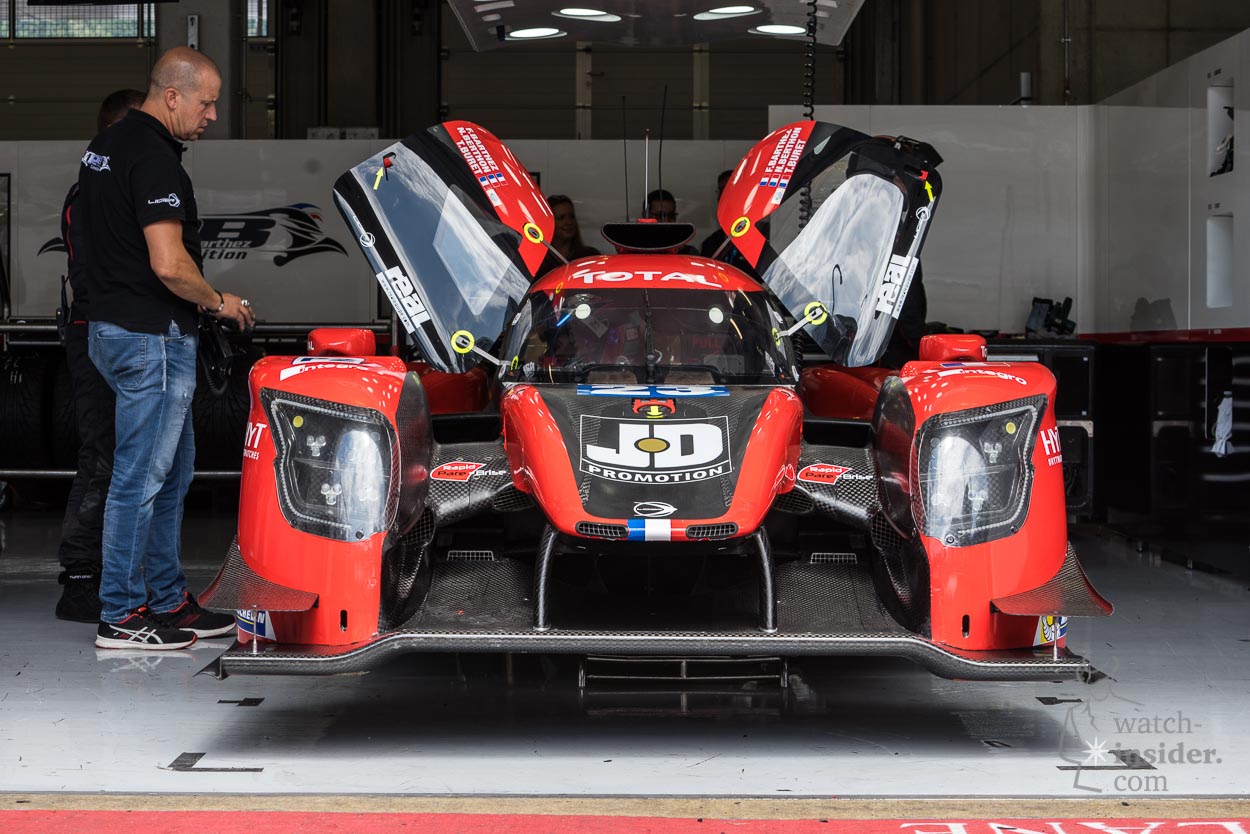 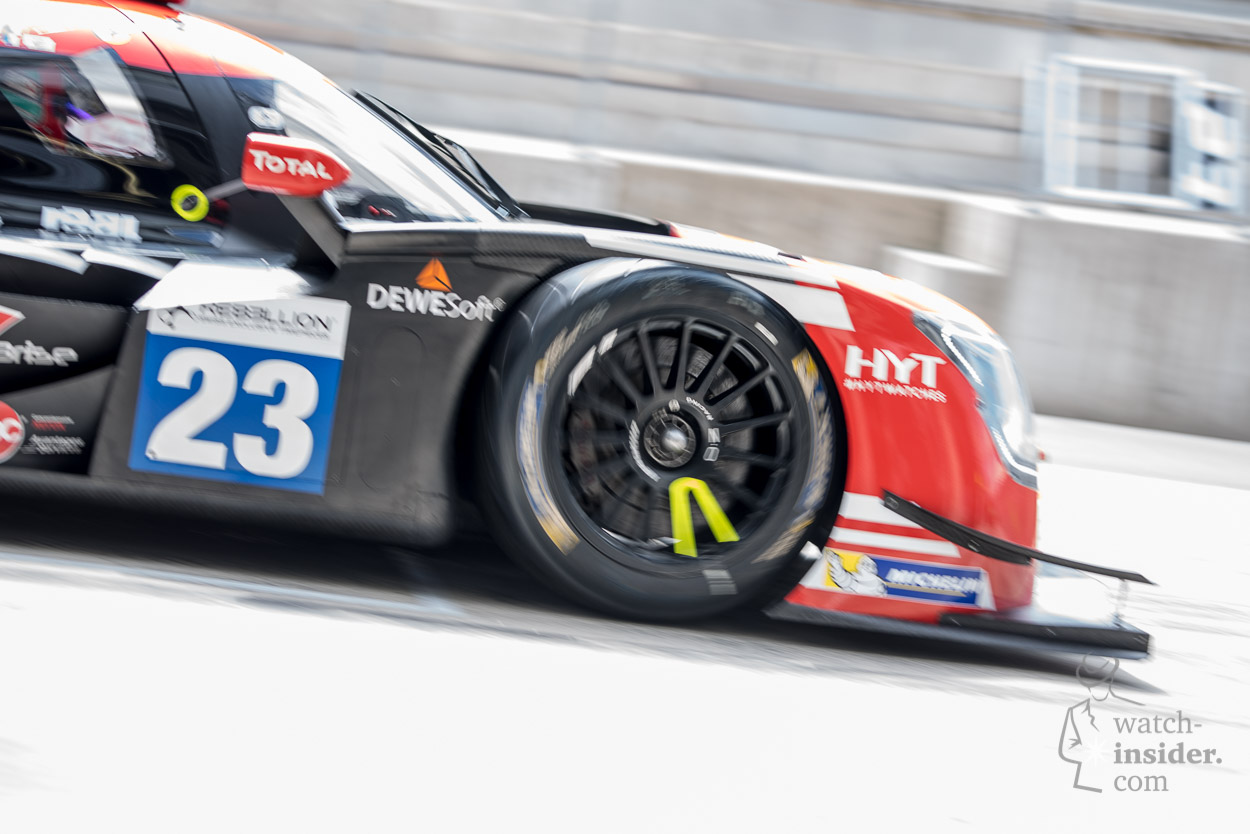 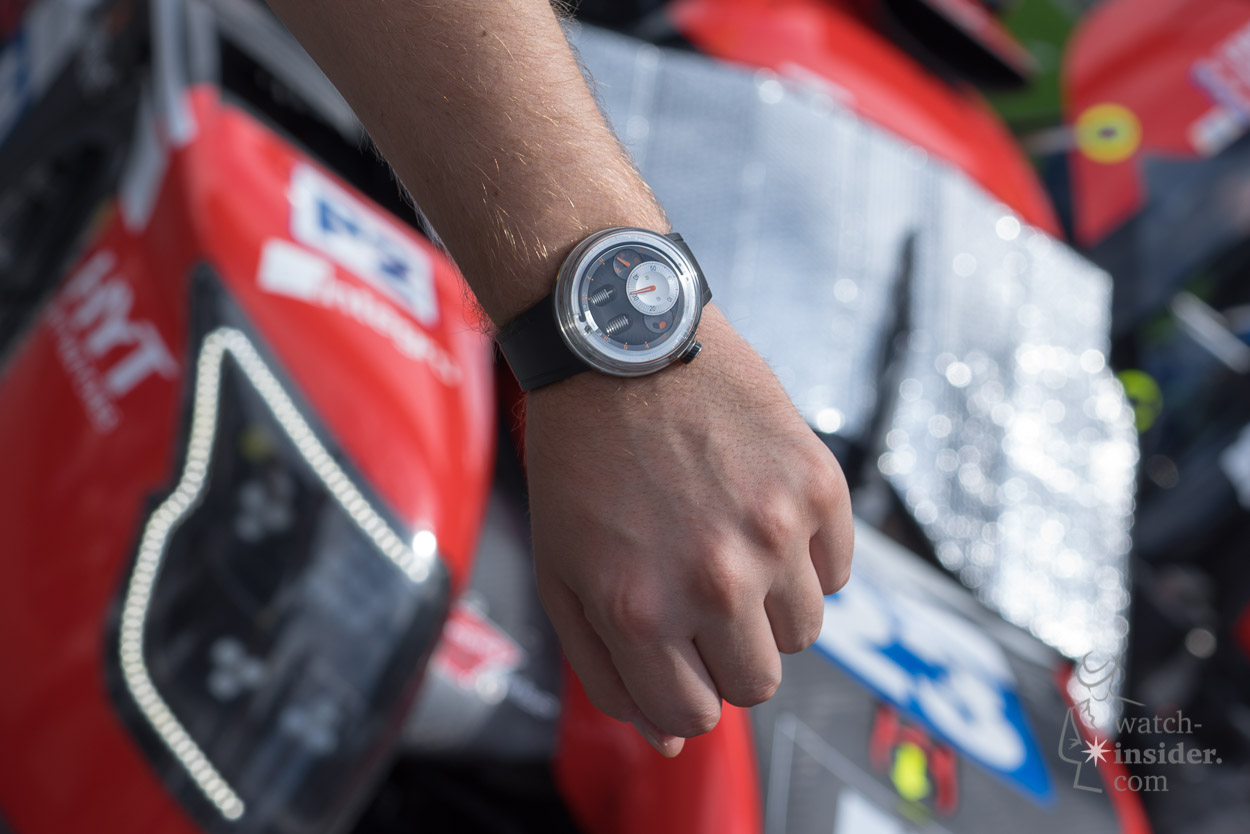 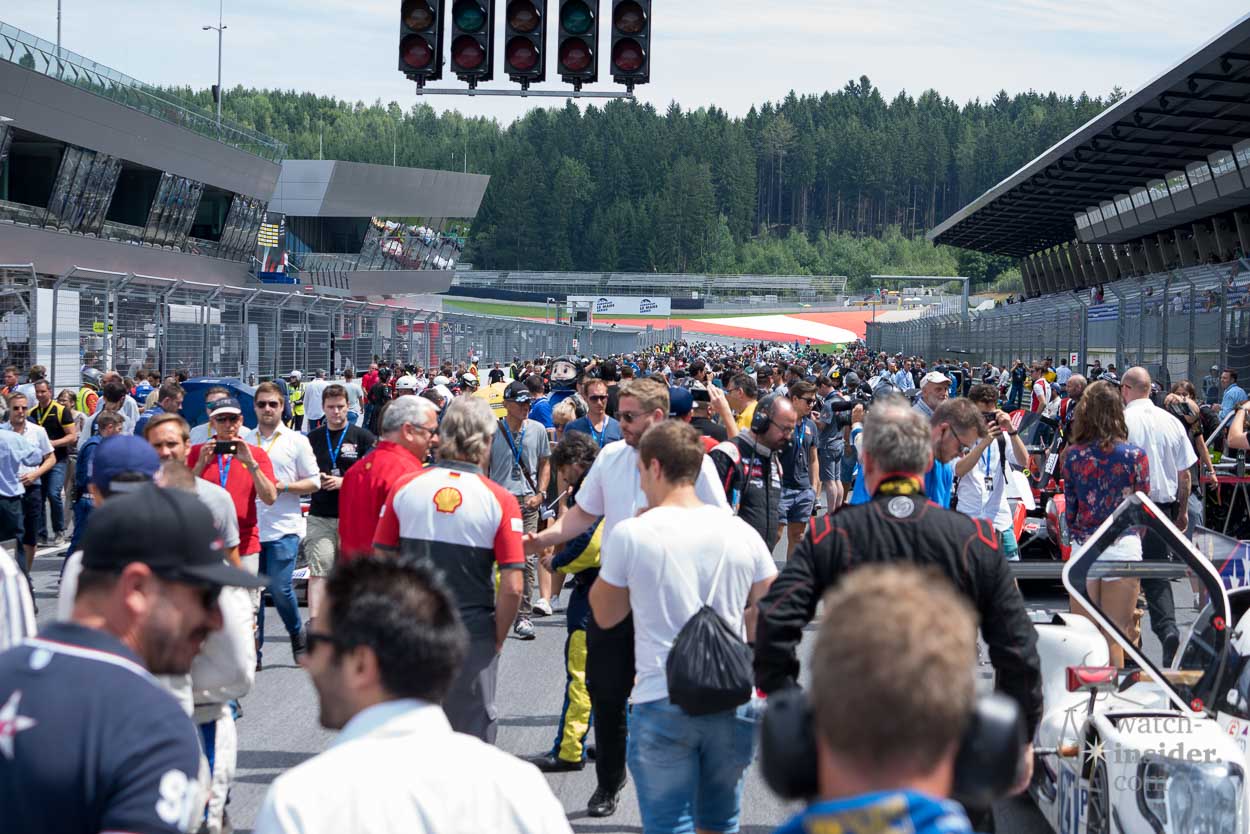 “ This team was created to share a human adventure with a leitmotiv : to transmit our experience of top level athletes to the youngest and the linked values without forgetting the notion of pleasure. It is the DNA of Panis-Barthez Compétition.” 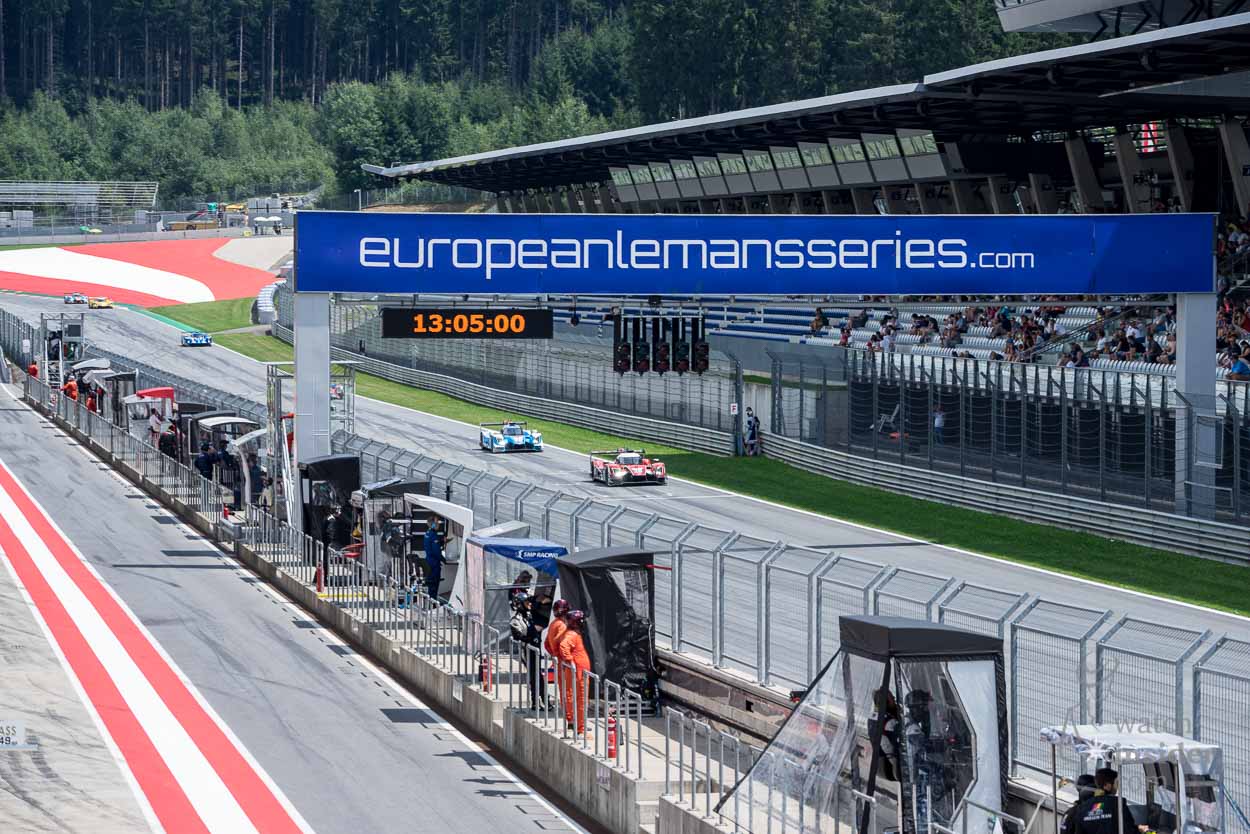 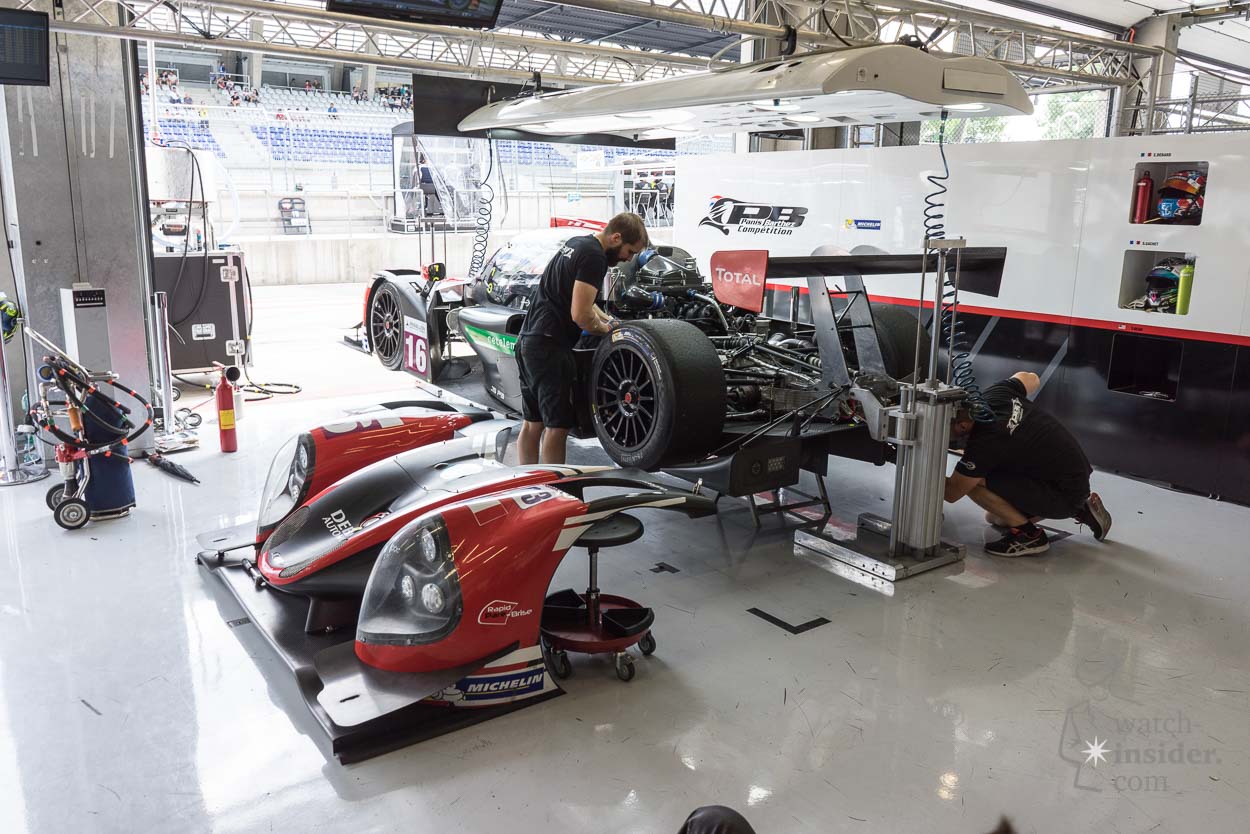 During the day we got to talk to several members of the team and all were really enthusiastic to share their knowledge and explain about the team and the cars. Their top class model being the Ligier JS 217 is a monocoque carbon built racing beast weighing only 930 kilo. This high tech racing car is powered by a 4 liter V8 engine that boosts an impressive 600 horse power. Plenty to guarantee some high paced action on the track. The Panis-Barthez Compétition team qualified in 4th place for the LMP2 class with an average speed of 195.6 km/h. For the LMP3 they took 5th.

When asking what the link is between racing and watchmaking the answer was quite clear. Both are high tech and consist of precise engineering and many technical terms are mentioned. Fluid dynamic is the first to be mentioned. Where the liquids in the bellows are transferred to the tube the shape and size changes creating a different movement of the liquid. For the team the bodywork design of the car has a similar effect yet it involves air streams instead of liquids.

When it comes to hydraulic pressure the comparison is obvious. Having liquids transferring between bellows is a technique that is used for braking and power steering also. Both have closed hydraulic circuits and both use various fluids to operate which are affected by thermal influences. And both feature displays to show important actual information either in the shape of time or race data. Also coatings are used to prevent liquids to stick to surfaces. In the HYT this helps the liquids to freely move inside the tube, on the race car is it used for clear vision during rain. 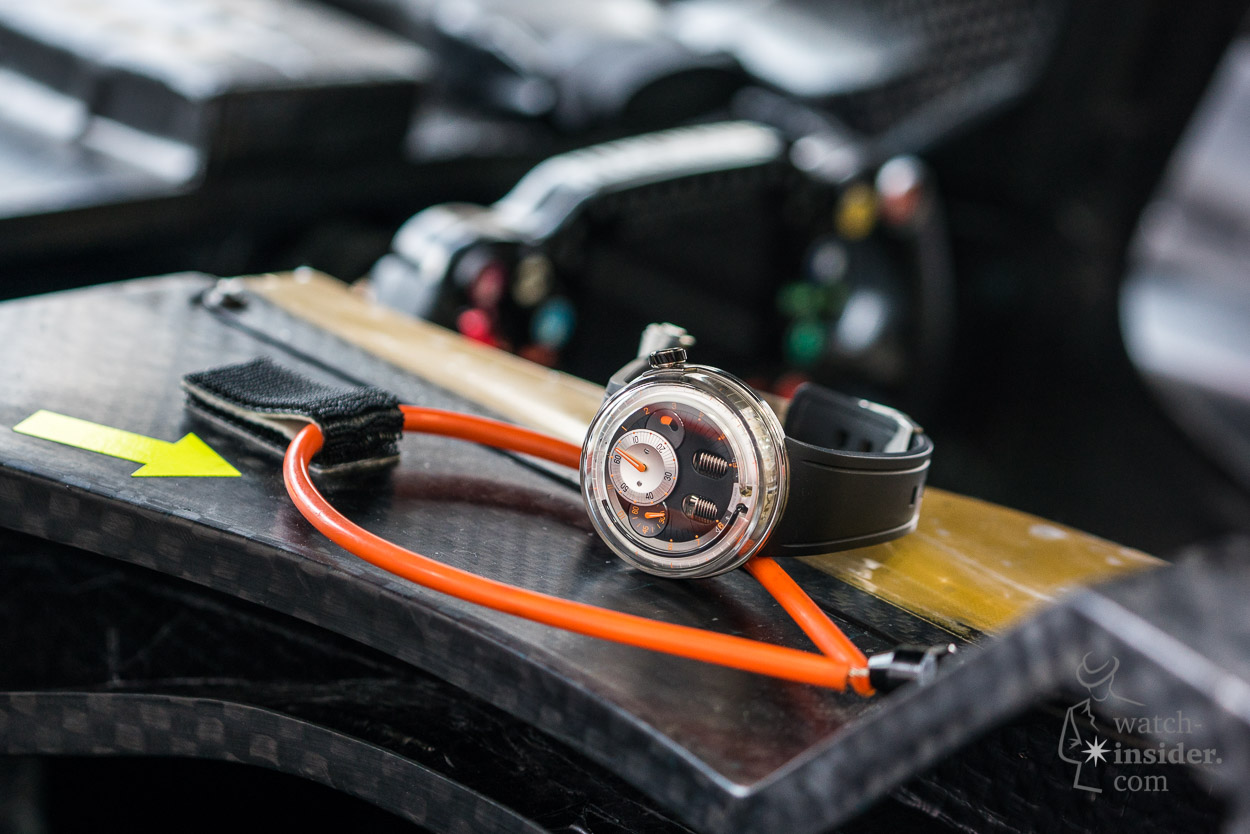 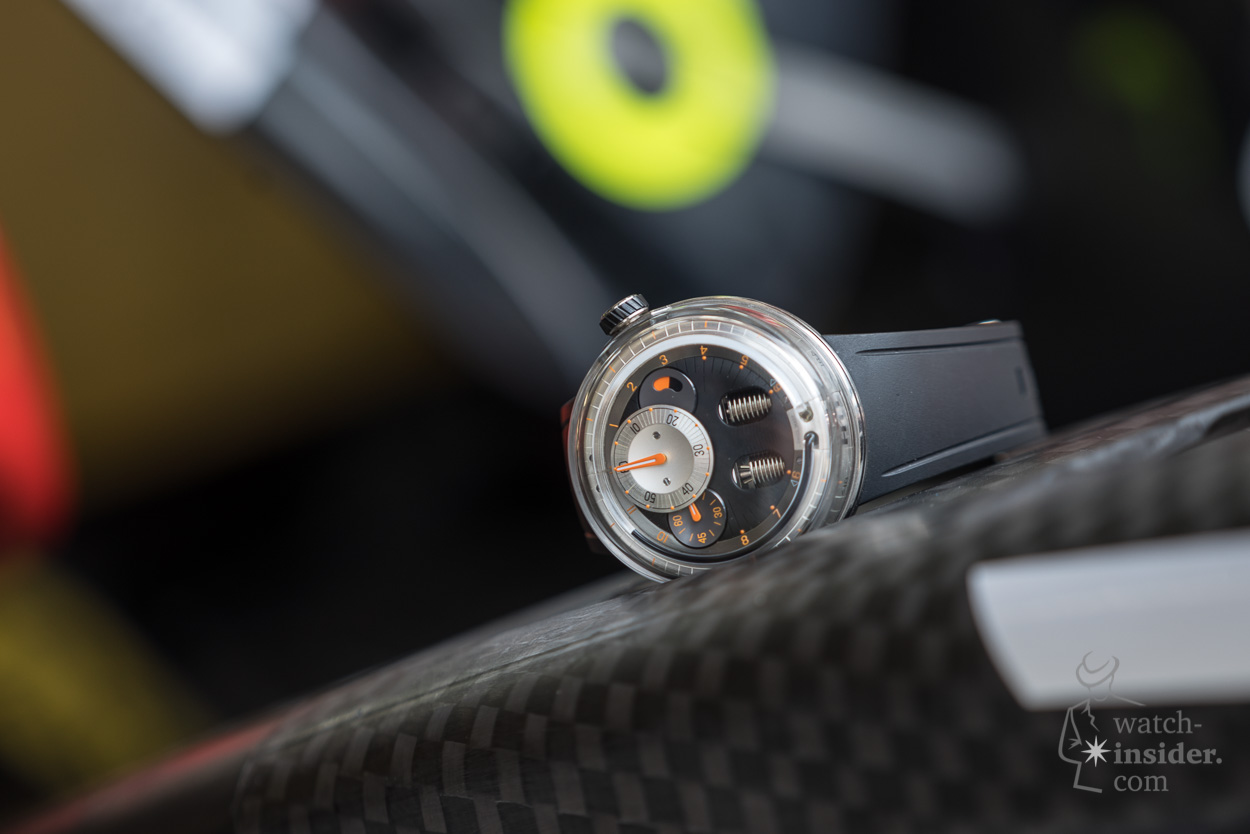 From the pit box

After watching the start of the race as a spectator we joined the team to experience the race from the pit box. Sadly the LMP3 didn’t make it to the end and had to give up after 14 laps. So the car returned to the pit where we saw the engineers working on it. Although at some times during the race it looked a bit chaotic in the pit you could clearly notice each of the team members has a certain job to do. Everything was timed and done with the utmost precision. Something that connects well with the watches. It’s all about mechanics and precision for the best achievement. 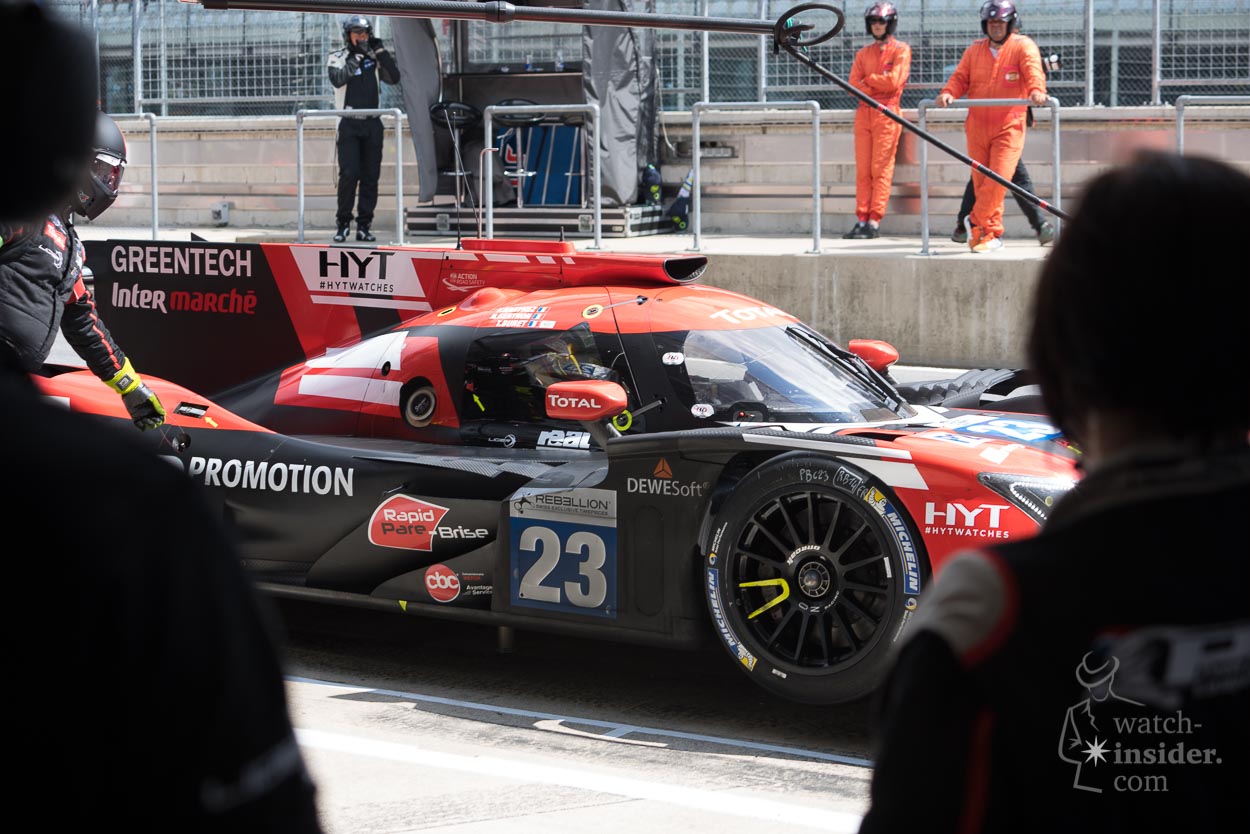 Big thanks to HYT for making this trip possible and Panis-Barthez Compétition for their hospitality! Enjoy the photo report for now, we will publish a hands-on review with the HYT H0 soon. Full photo gallery after the break.