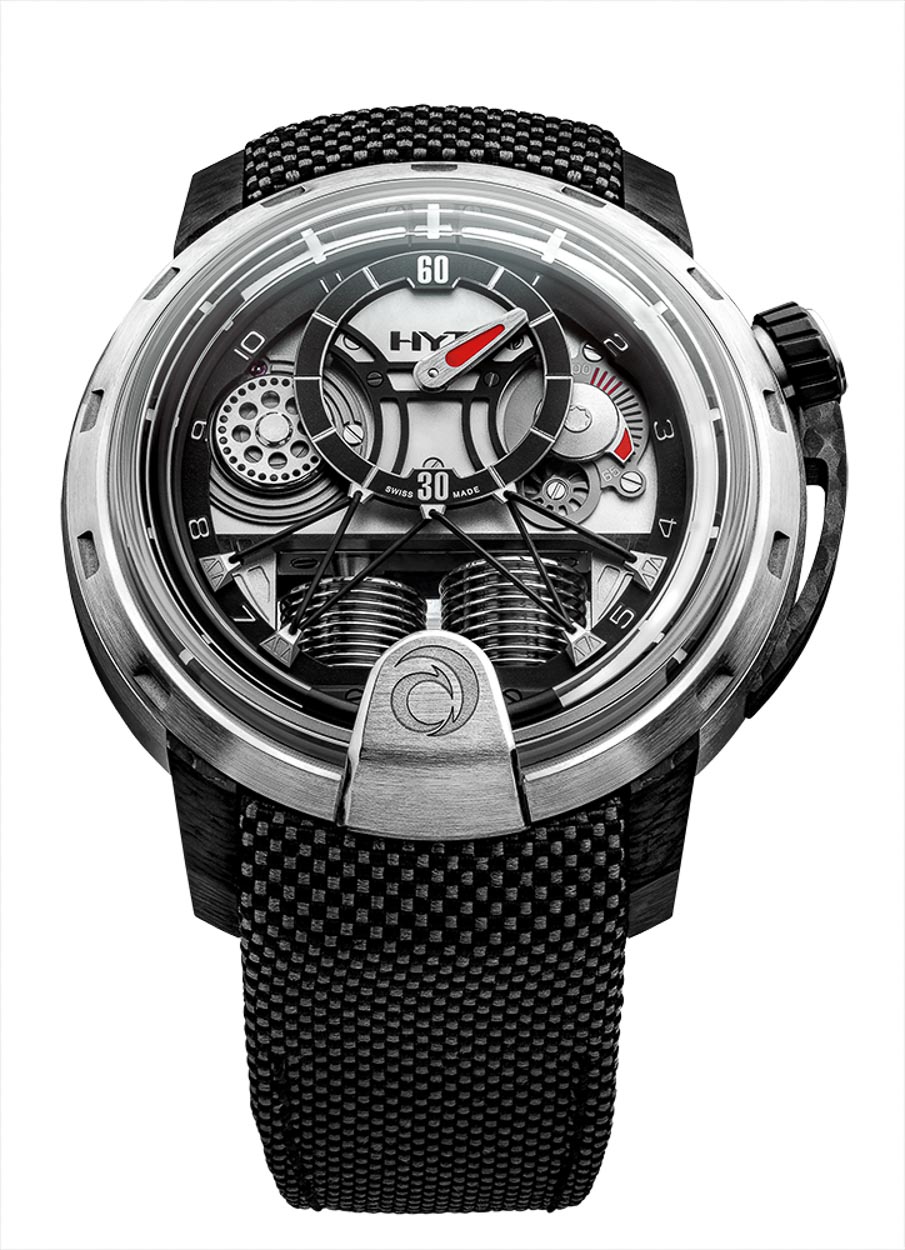 What’s cool about this limited edition of 20 pieces only, are the well though of sailing details which you will find throughout the watch. Probably the first thing you will notice is the rigging that holds the small minutes in place. Something that can be found throughout the custom built Alinghi catamaran. When taking a closer look you’ll see the small seconds at 9 o’clock which resembles a roller furling. This is a piece of equipment that is mostly found at frontsails and makes them manageable from the deck. The power reserve indicator is a winch where the rope guard is the indicator. 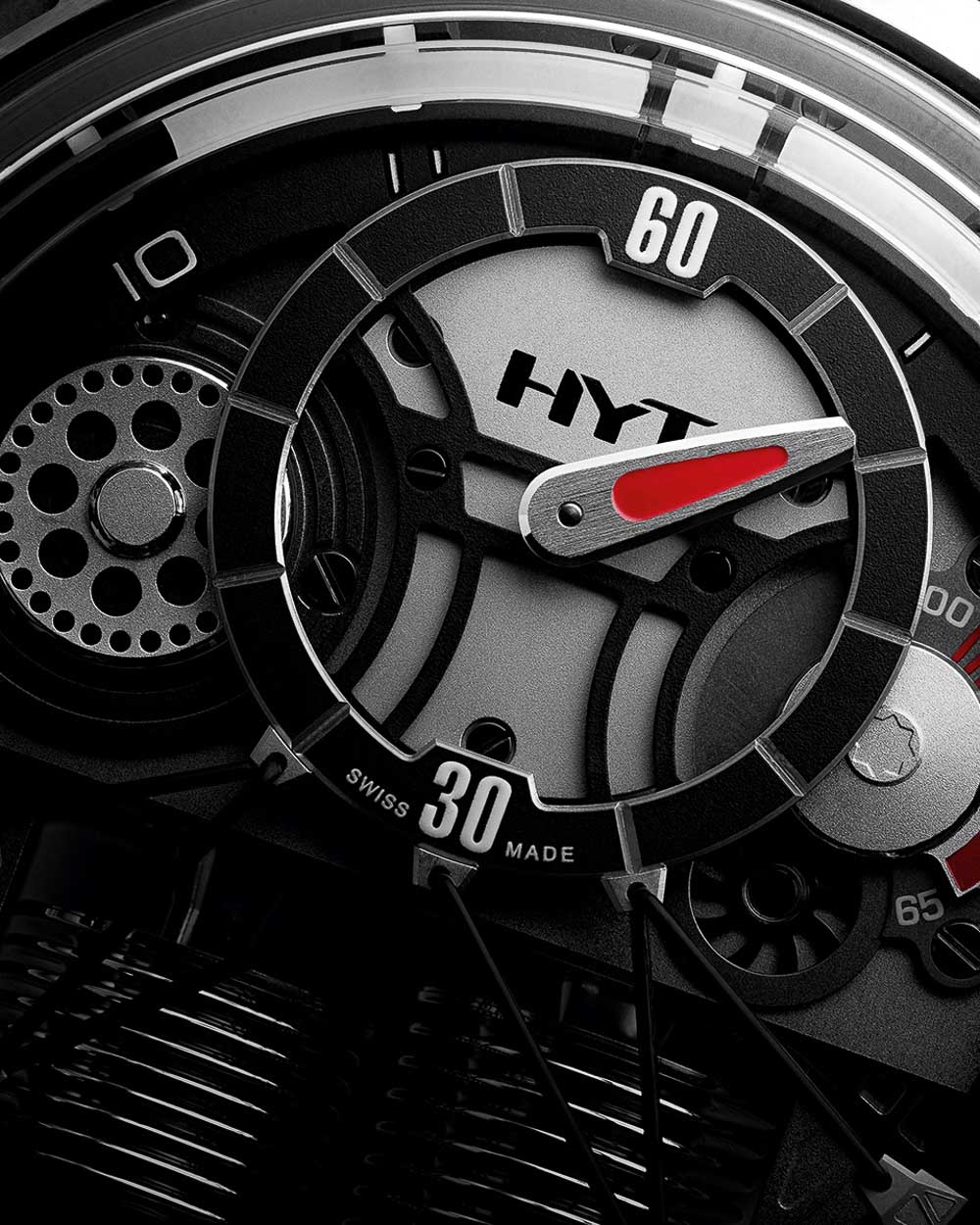 Furthermore the HYT H1 Alinghi Limited Edition is moslty made from hi-tech materials that are used in the construction of racing boats like the Alinghi catamaran such as titanium and carbon. Because of this the weight of the watch will still be comfortable for it’s rather large size. Choosing a matching colour scheme to the materials used with just a few red details the overall look is a rather pleasant one and not too much in your face. 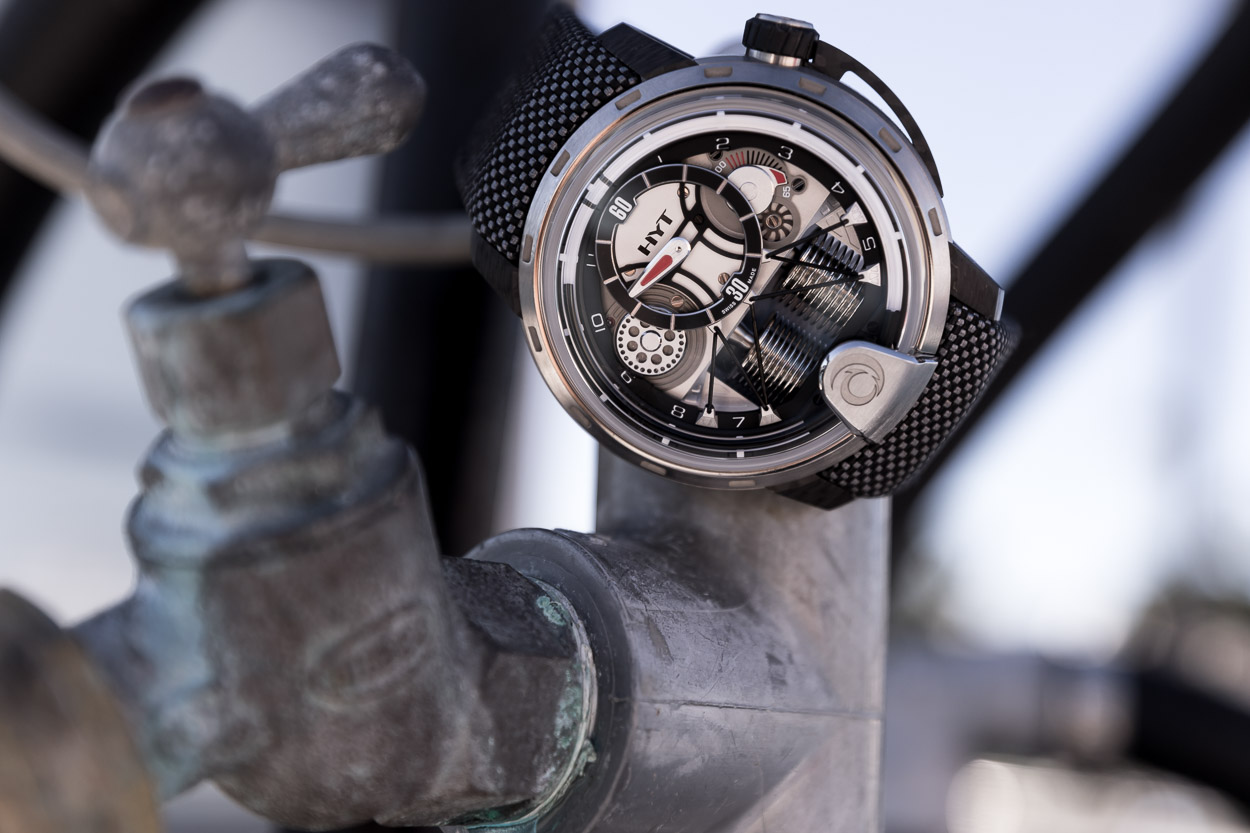 As you can expect from a HYT watch the price-tag is there but you get some nifty watch technology on the wrist that no other brand can offer you. For 65K one of the 20 HYT H1 Alinghi Limited Editions can be part of your watch collection.

For more info please visit HYT.com or continue reading the press release below. 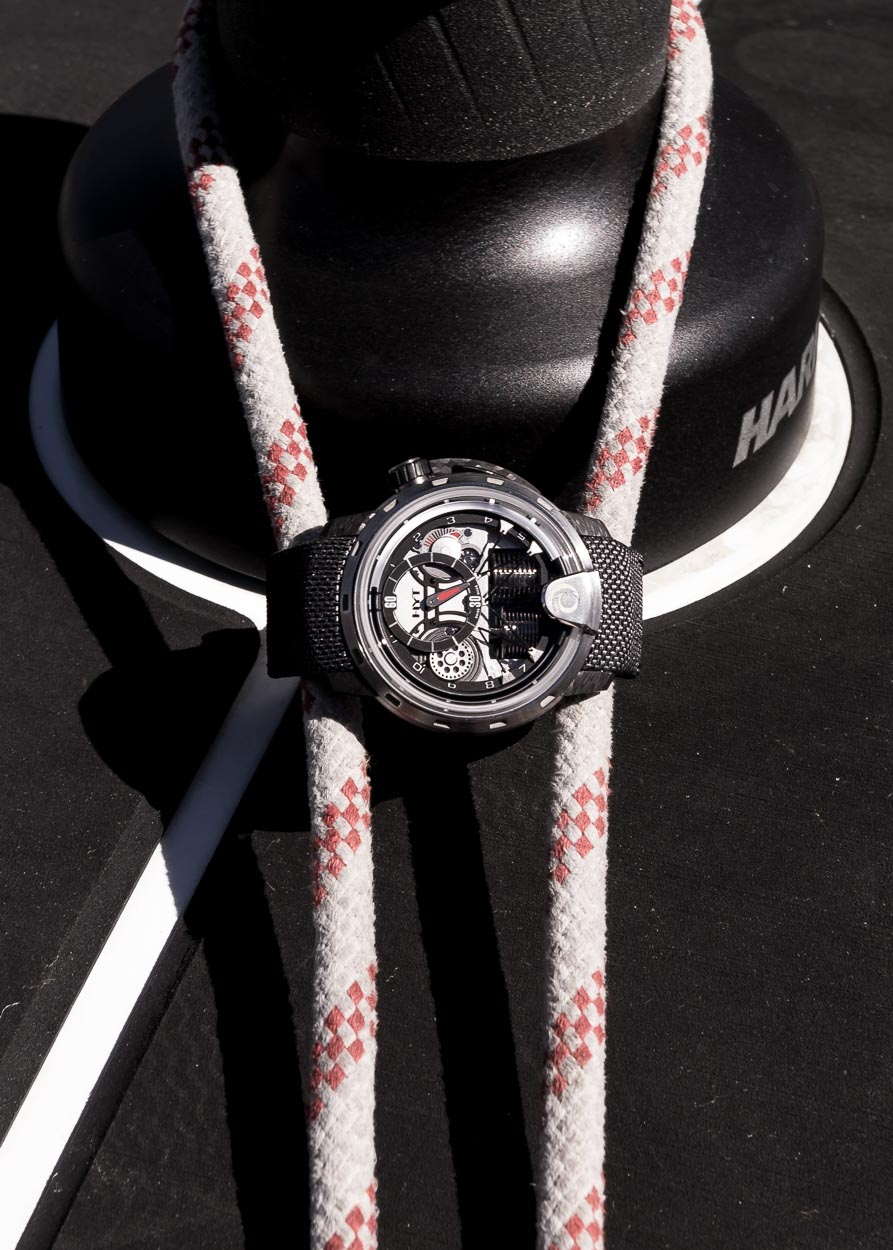 Another special feature of this model is that it results from a long process to assimilate Alinghi’s signature design. Without a doubt, the most striking of these is the rigging which criss-crosses the lower half of its dial. Custom-designed, it passes through four eyelets on the flange, before being secured to three central eyelets; with precision, nothing left to chance, a preoccupation shared by yacht and watchmaking.

“For the last three years, we have been lucky enough to have a bold, avant-garde watch partner, one able to integrate fluids into the time display. In terms of shared values, we could not be any closer! With this H1 Alinghi, HYT goes even further by integrating essential deck gear into the dial, such as the winch and furler, but also the rigging. It is an unmistakable nod to the yachting world. I love the concept and it is completely unique!” enthused Nils Frei, Alinghi’s mainsail trimmer. 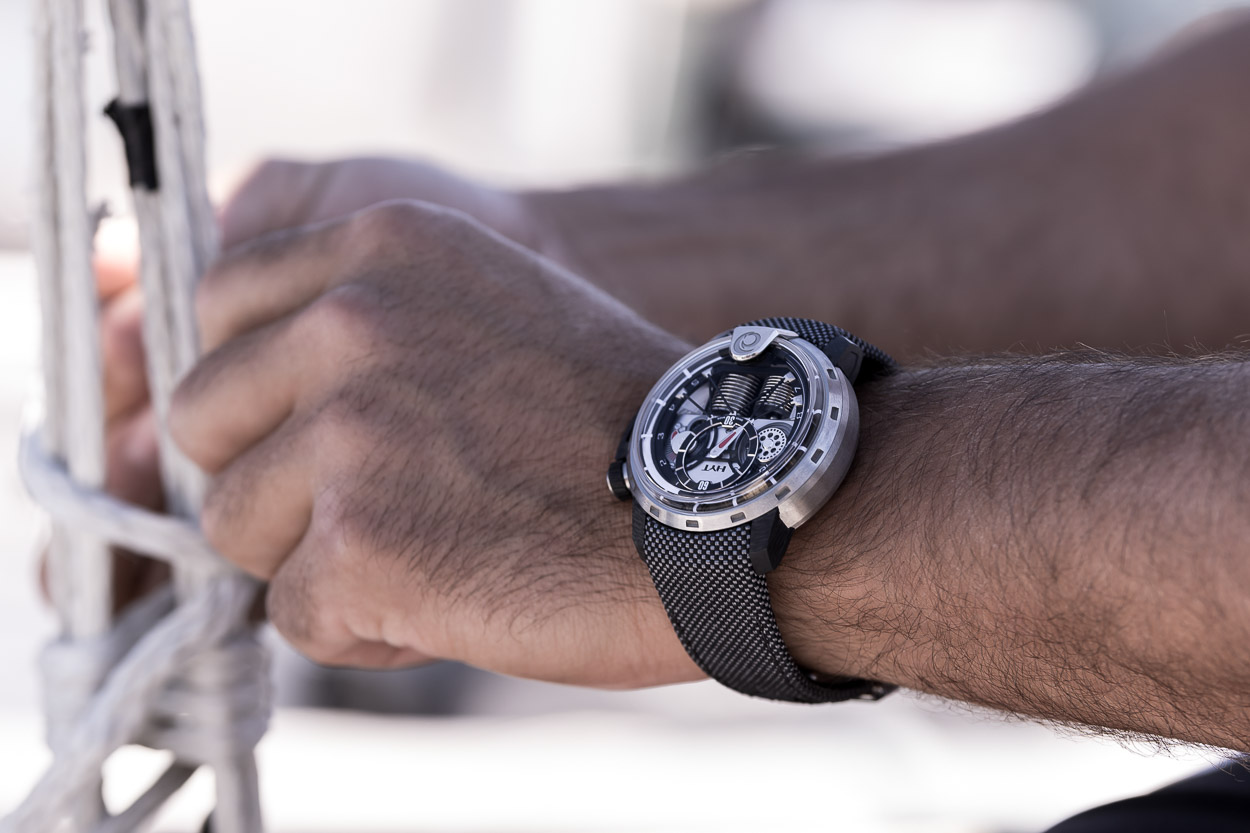 The H1 Alinghi is the epitome of understatement. The aim is to focus as much attention on the technology as on the aesthetics. On the back, the structure of the H1 Alinghi echoes the deck of a yacht. The grey sandblasted finish is the perfect backdrop to showcase the piece in all its high-tech glory.

“It is the most technically advanced of the models resulting from our partnership with Alinghi“. For Grégory Dourde, CEO of HYT

The dial, just like an Alinghi catamaran in full flight, uses an array of technology to enable the time to be read via the liquid in the capillary, to create its signature fluid time. An understated and pure deep black colour was chosen. To make it easier to read in the dark, HYT has set it on a channel filled with Super-LumiNova. At night, the translucent part of the capillary reflects the light, enabling the time display, which remains opaque, to be read.

With the benefits of carbon

In terms of materials, both HYT and Alinghi favour lightness and rigidity. The piece has offset lugs and a crown guard made from folded and forged carbon. These elements are designed and manufactured outside of the watch, then assembled onto its titanium middle. 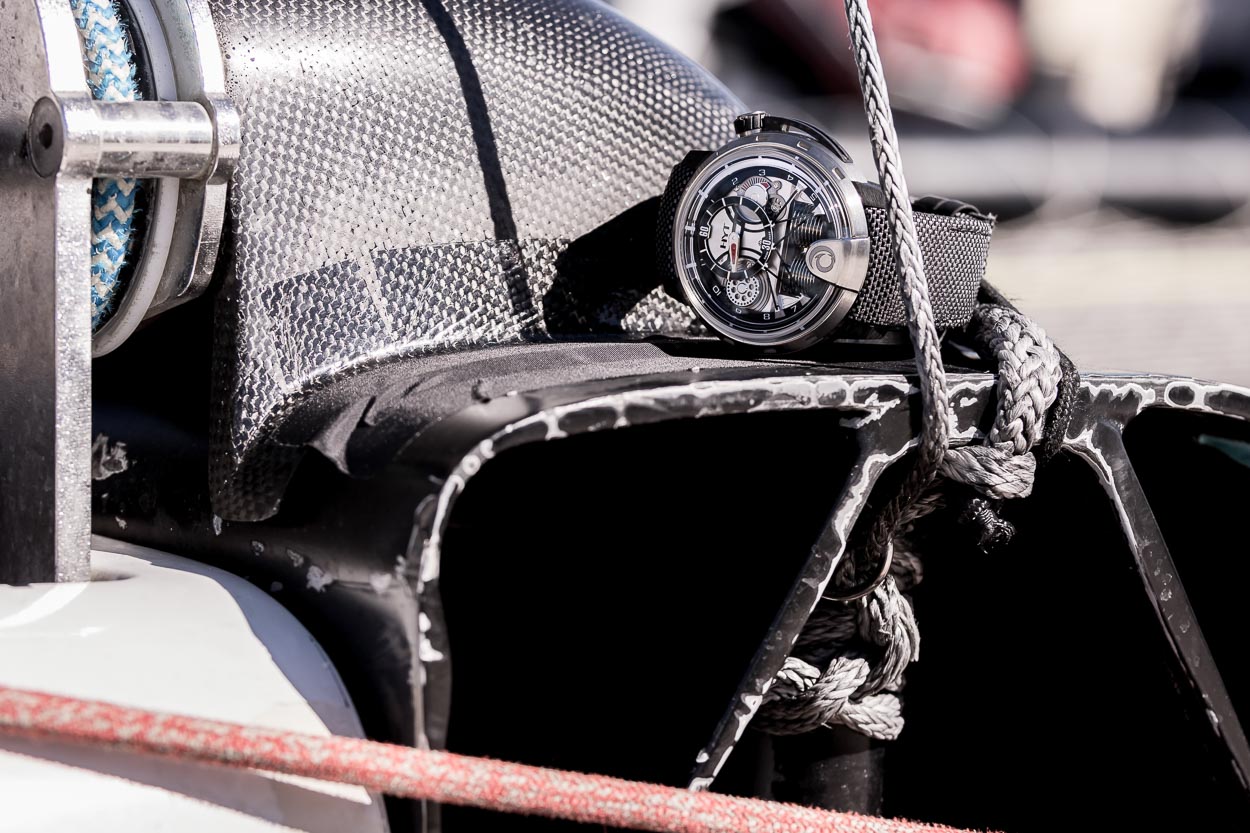 “We visited the shipyards where the team prepares its multihull craft“, explained Grégory Dourde. “We observed how the yachts were built, their unfinished and assembled components, their functions, their positioning…. Many of these elements found their way into the piece“.

Lastly, the dial features a host of elements which have been designed specifically for the H1 Alinghi and its yachting world: the small second at 9 o’clock in the shape of a mainsail furler, the power reserve at 3 o’clock shaped like a winch, the jumper at 6 o’clock which bears the Alinghi logo, and the team’s signature red, which is found on the power reserve and the minute hand.

Alinghi is a sailing team created in 1994 by Ernesto Bertarelli. In 2000, the team set itself the goal of winning the America’s Cup, which it did twice, in 2003 and 2007, meaning it was the first European team to win the historic prize. The team has many other successes to its name, both from before and after it’s America’s Cup campaigns, including seven Bol d’Or victories, six D35 trophies and three Extreme Sailing Series championships.