First launched in 201, the Horological Machine No. 7 is back in a titanium case with a green sapphire crystal bezel which is limited to 50 pieces. The HM7 Aquapod began its gestation as a horological jellyfish which is radially symmetric and so is the Aquapod. Where a jellyfish generates power from food caught in its tentacles, the HM7 Aquapod generates power from its tentacle-like automatic winding rotor. 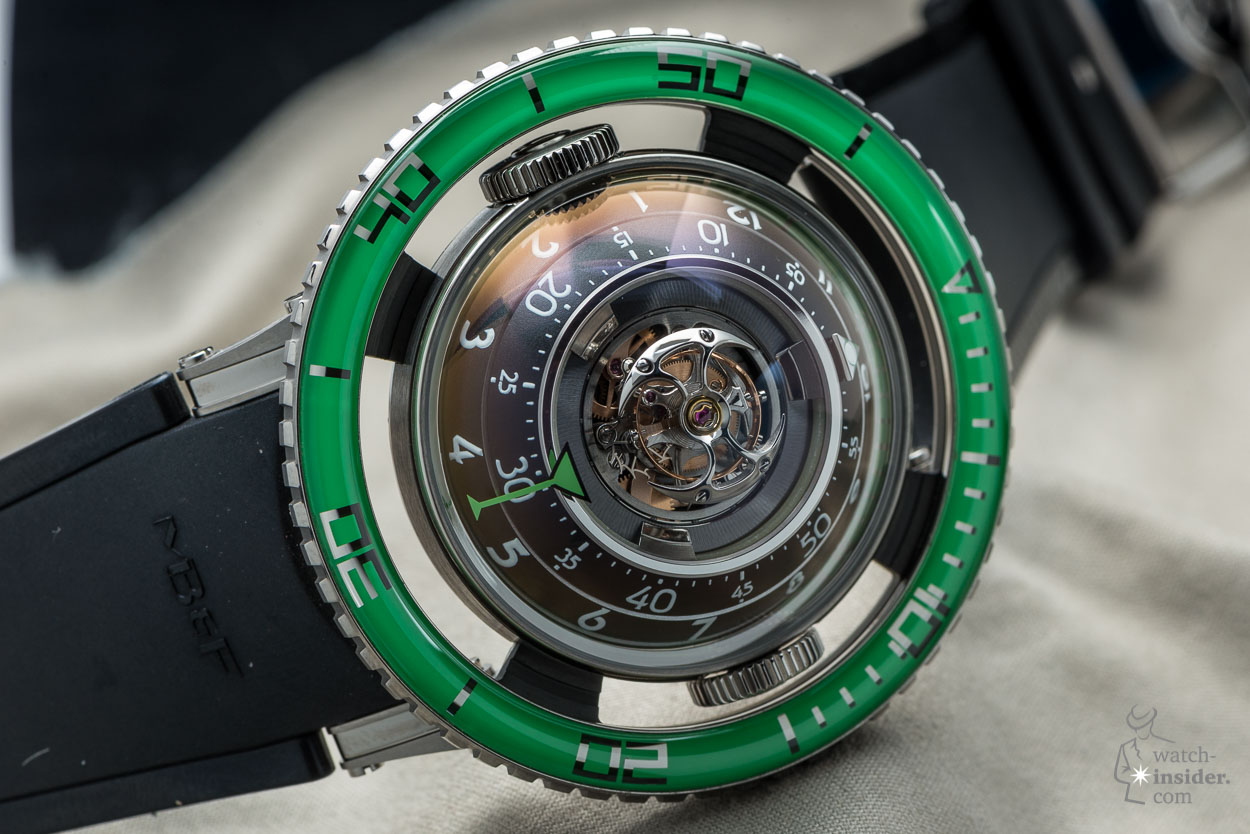 The winding rotor’s tentacles are crafted from a solid block of titanium; their very three-dimensional nature makes machining and finishing extremely challenging. Underneath the tentacles, a platinum mass ensures powerful and efficient winding. And then there’s that bezel. While Horological Machine No.7 is not a dive watch, it is a timepiece comfortably at home in the water. However, unlike every other dive watch on the planet, Aquapod’s bezel isn’t attached to the case, but floats apart like a life buoy. And, like many jellyfish, HM7 glows in the dark. 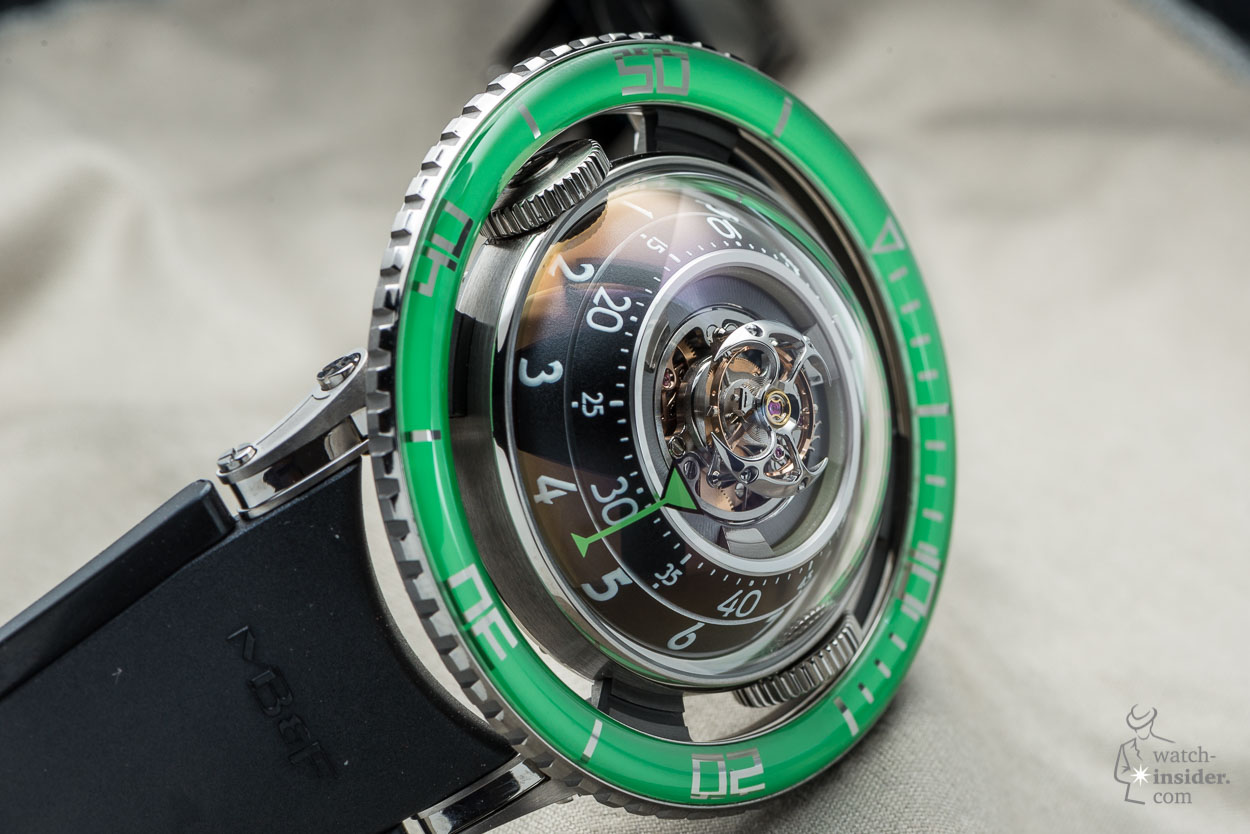 The 303-component, 72-hour power reserve HM7 Engine was developed in-house by MB&F. Spherically three-dimensional, all its mechanisms – from the winding rotor at the bottom, past the mainspring barrel and hour and minute displays, to the flying tourbillon on top – rotate concentrically around the centre. The curves of the high-domed sapphire crystal are mirrored in the shape of the time display rings, which are not simply flat and angled, but are mathematically precise, curved spherical segments.

From bottom to top, the winding rotor, mainspring barrel, hour and minute indications, and flying tourbillon are all concentrically mounted around the central axis. Energy travels from the rotor at the very bottom of the movement to the flying tourbillon regulator at the very top via gearing acting like a series of stairs, allowing power to transition from one level to the next. 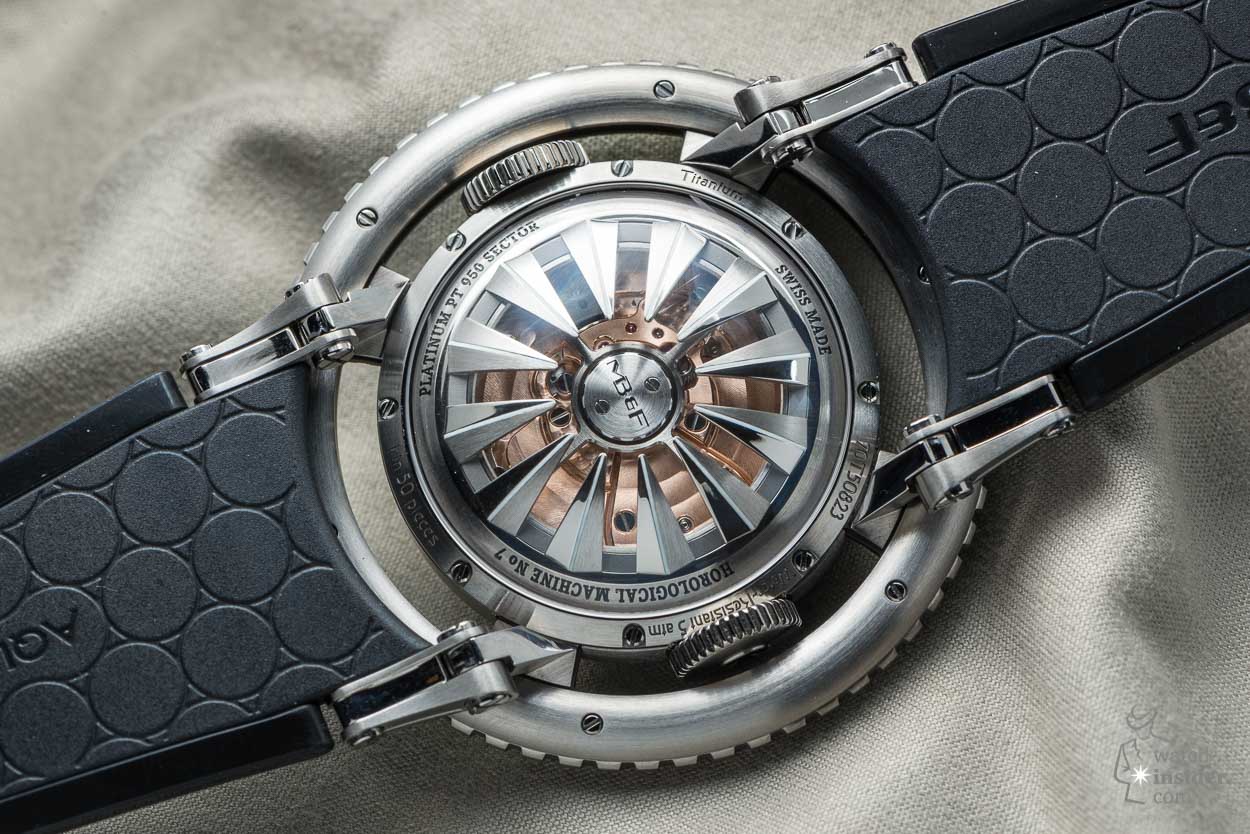 This concentric architecture allows for the hours and minutes to be displayed around the periphery of the movement; however, this presented a serious challenge in itself: how to support such large-diameter time display rings? The answer was to develop extra-large diameter ceramic ball bearings, to support the spherical segment hour and minute displays and rotate with a very low coefficient of friction. The spherical segment discs are in aluminium and titanium for both minimum mass and maximum rigidity. 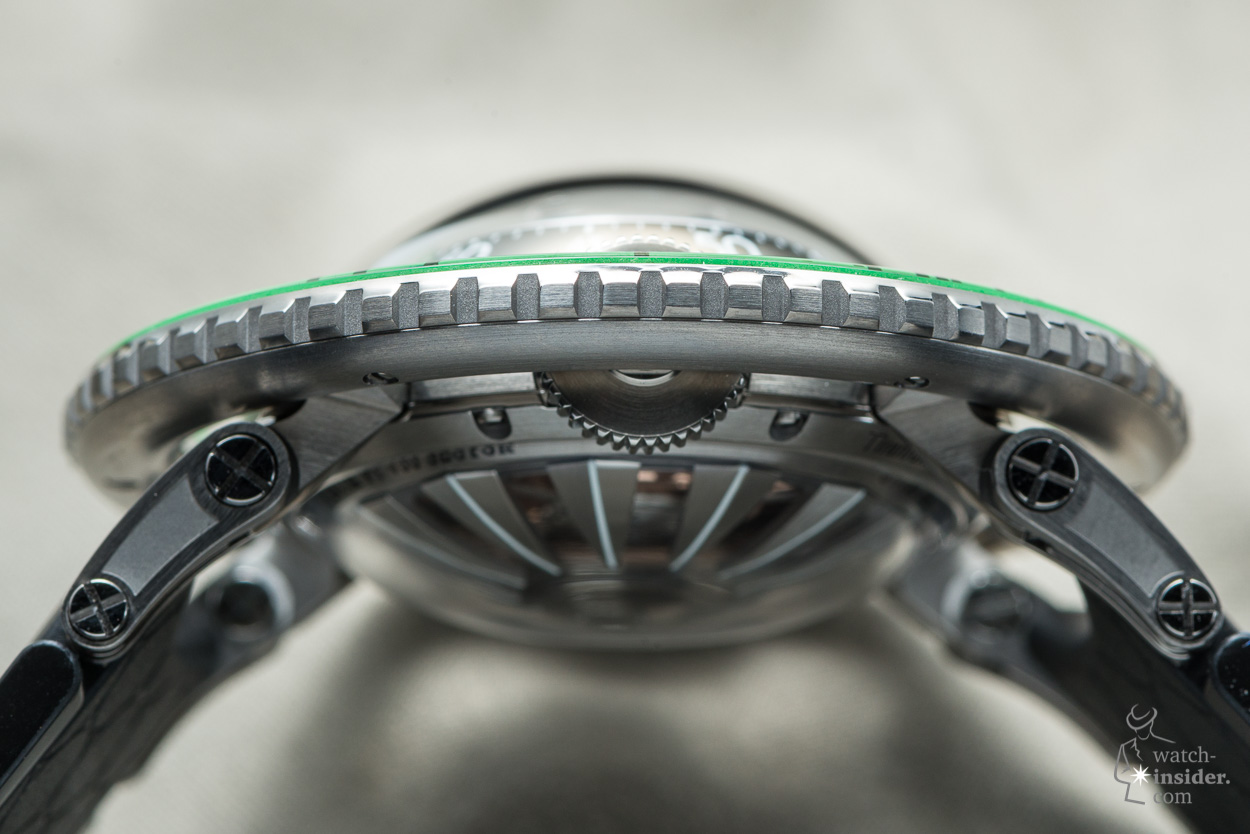 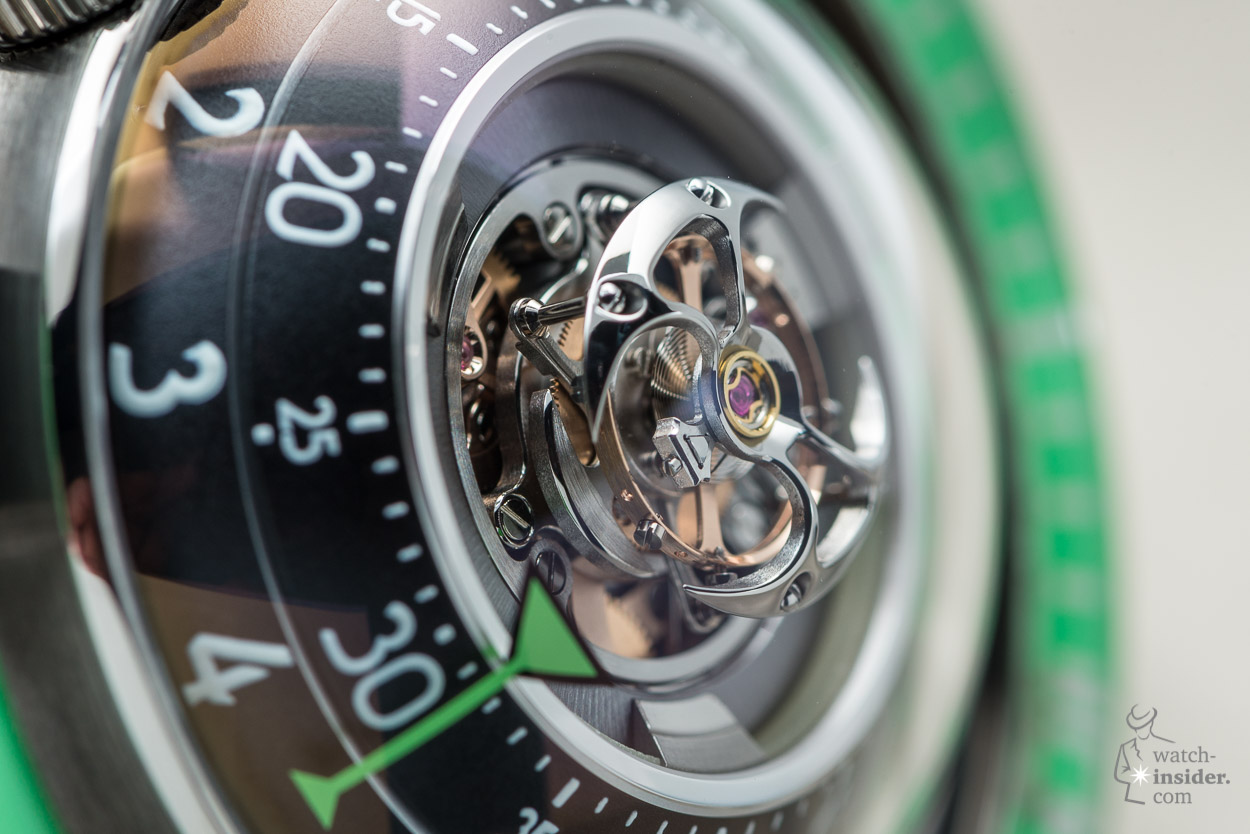 The winding rotor’s tentacles are machined from a solid block of titanium. Their curved, very three-dimensional nature is a manufacturing challenge, both for machining and for finishing, which alternates between polished and satin-finished sections. Hidden underneath the lightweight titanium tentacles, a sector in much heavier platinum ensures that the HM7 Engine is wound efficiently.

Hours and minutes are displayed by two spherical segment discs in aluminium and titanium, which are supported by specially developed oversized ceramic ball bearings. The hour and minute numerals and markers have been hand-painted in Super-LumiNova, making them legible by night. They are hand-painted, because it is impossible to print neatly on such complexly-curved components. 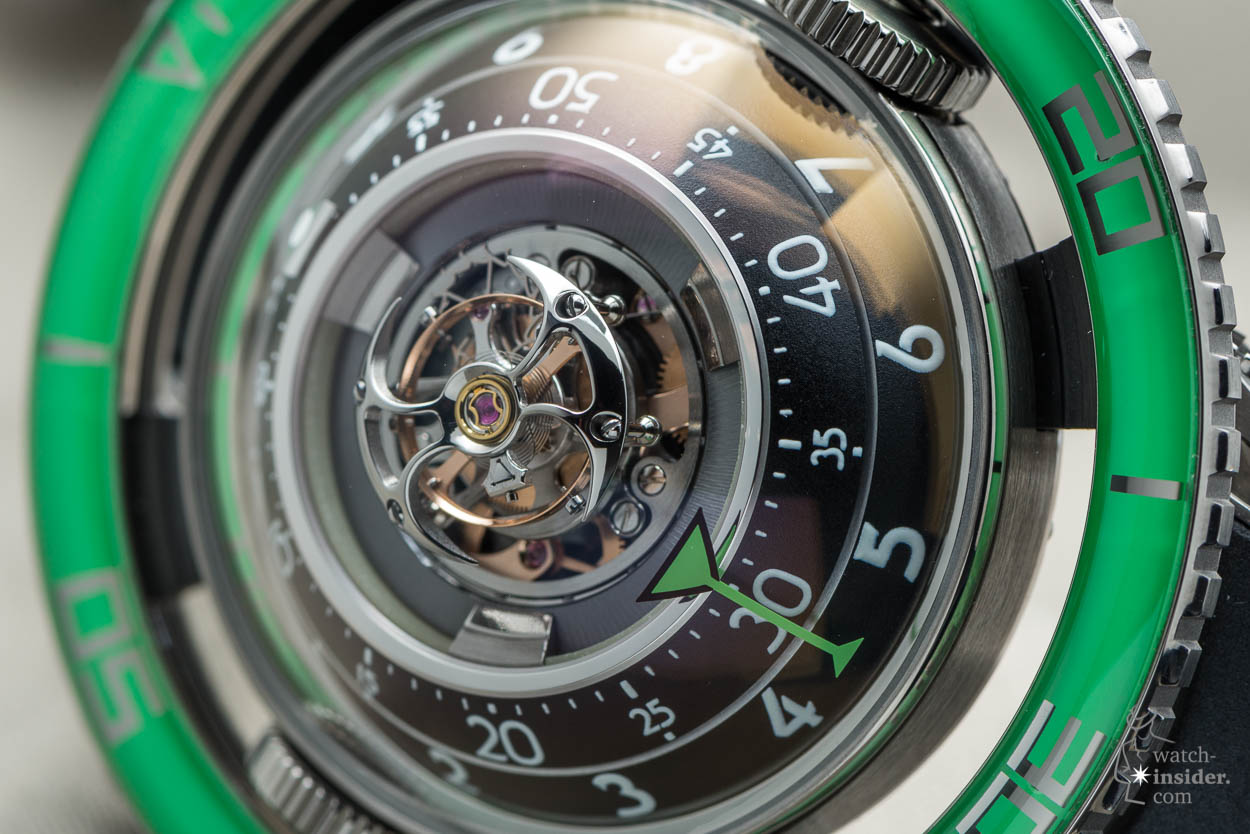 The case of HM7 Aquapod is basically a three-dimensional sandwich comprising two hemispheres of high-domed sapphire crystal on either side of a metal case band. The unidirectional bezel floats outside the case proper, while dual crowns are located between the two structures: the one on the left is for winding the movement (if necessary) and the crown on the right is for setting the time. The large crowns are ergonomically designed for ease of use, even when manipulated with wet fingers.

* MSRP at time of publication. Price(s) excl. VAT and may vary depending on location.MB