Magnetism per se is an enemy of mechanical watches. But times are changing. And the first manufacturers are already putting magnets to good use. I invite you to have a look into the future of watchmaking with me …

Breguet has definitely taken the leading role. Researchers are pursuing two directions at the headquarters of the venerable manufacture in Vallée de Joux. On the one hand, they’ve used magnets to replace classical centrifugal-force regulation in the Classique La Musicale (Ref. 7800BR/AA/9YV 02) watch.

This masterpiece, which combines a music box and a wristwatch, can play melodies throughout an eighty-second interval. A uniform rotational speed is essential for the turning disc on which pins of various lengths, each corresponding to a note of the musical scale, are sequentially scanned by a rack that generates the sounds.

The slightest deviation from uniform rotational speed would detract from the listening pleasure. Traditional centrifugal-force regulation assured this uniformity until recently, but now a modern magnetic regulator controls the running speed.

Measurements at Breguet confirm that the Classique La Musicale can compete with a live orchestra. 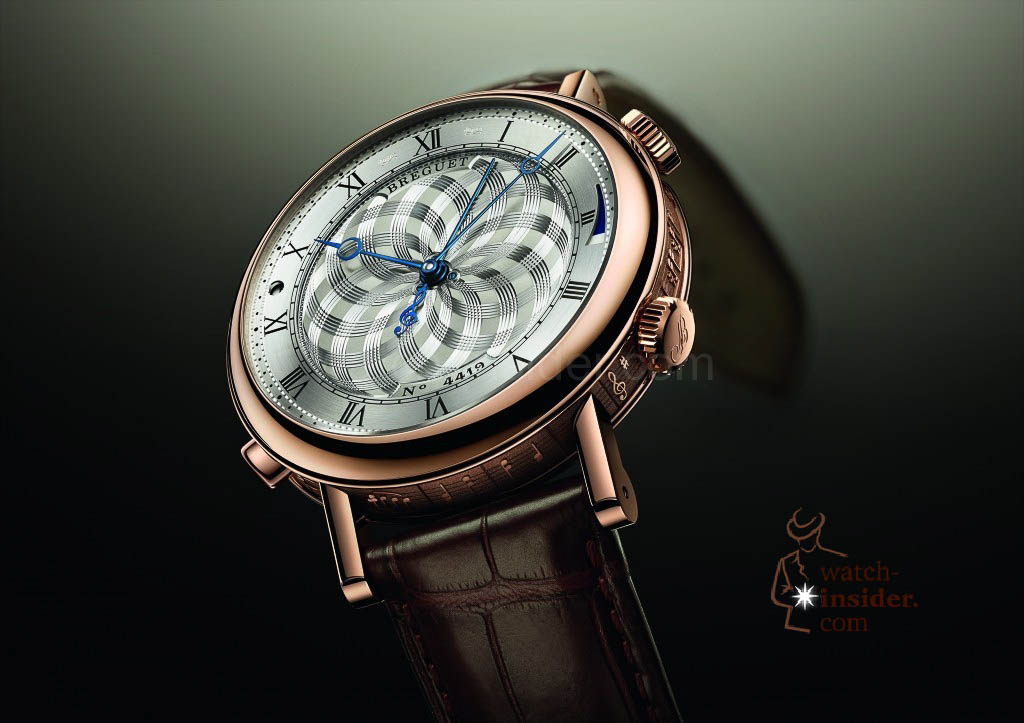 Yet when the button at 10 o’clock is pressed or when a set time has come, this Classique model plays Badinerie, composed by Johann Sebastian Bach as the final movement of his orchestral suite N°2 in B minor.

But that’s only one application for magnetism …

Breguet was also investigating ways to use magnetism in a watch’s escapement. The goal was to minimize friction in the bearings of the balance’s staff. In a conventional movement, each end of this staff pivots inside in a jewel bearing. Friction in the bearings remains tolerably low when the balance is horizontal; but motions in vertical positions, as well as the change from a horizontal to a vertical orientation, can cause significant frictional losses, which ultimately lead to inaccuracies in the watch’s rate. If the balance’s staff is borne between two precisely programmed magnets, it always turns with the same amount of resistance regardless of its momentary orientation.

The so-called “quality factor” (or “Q factor”) of the regulating organ provides valuable information and says much about the characteristics of an escapement.

The Q factor of the regulating organ is exactly defined: it quantifies the amount of energy needed to keep the balance’s amplitude steady between two successive oscillations.

The factor is tested without a pallet-lever; the balance is manually rotated through circa 330 degrees of arc and released; a laser then visually measures the number of degrees lost from one oscillation to the next until the balance’s amplitude has declined to 180 degrees. The poorer the balance-spring, or the poorer the ratio between mass and moment of inertia or air resistance, the poorer the Q factor is.

The following values can serve as points of reference.

Two years ago Breguet debuted its ten-hertz caliber 589F in the Type XXII, where the caliber’s Q factor could be increased to 550 in flat positions and 450 in hanging positions.

Breguet afterwards catapulted the Q factor in the two above mentioned test positions to an astronomically high value of 650 with the new ten-hertz caliber 574DR in the Reference 7727 Classique Chronométrie, which was now shown in detail to me at Baselworld in 2013.

To fully appreciate this performance, we need to consider another variable, which is measured in microwatts: the so-called “regulability” of the balance.

Breguet’s ten-hertz caliber 574DR, which ticks inside the Reference 7727 Classique Chronométrie.  increases these values to 830 and 677 microwatts.

Improvements in the bearing, the rotation and the stability of the balance’s staff have been achieved thanks to Breguet’s comprehensive research into practical uses for magnetism in a watch’s movement. The innovation relies on two uncommonly powerful micro-magnets with a magnetic flux density of 1.3 Tesla at 20° Celsius, a magnetic energy of 302 kJ/m3 and coercive field strength of 106 kA/m. One magnet is stronger than its counterpart, so each end of the staff is continually kept in contact with one of the two ruby bearings, each of which is affixed as a cap on its corresponding magnet. The resulting magnetic induction currents in and along the balance’s staff generate a force which exerts a self-stabilizing effect on the entire staff. This results in a dynamically stabile system that automatically centers and corrects itself. The attractive force between the staff and the counter-pivot that holds it is stronger than the force of gravity, so the staff “hangs” on this counter-pivot or ruby bearing regardless of the balance’s orientation.

There is no error due to gravity!

Furthermore, the system acts like a shock absorber inside the watch: if impact or sudden acceleration causes the rotating staff to temporarily depart from its balanced and poised position, the corrective effect of the magnetic attraction increases proportionately to the size of the shift out of center, thus enabling the staff to automatically re-center itself and restore the magnetic flux to its maximum. 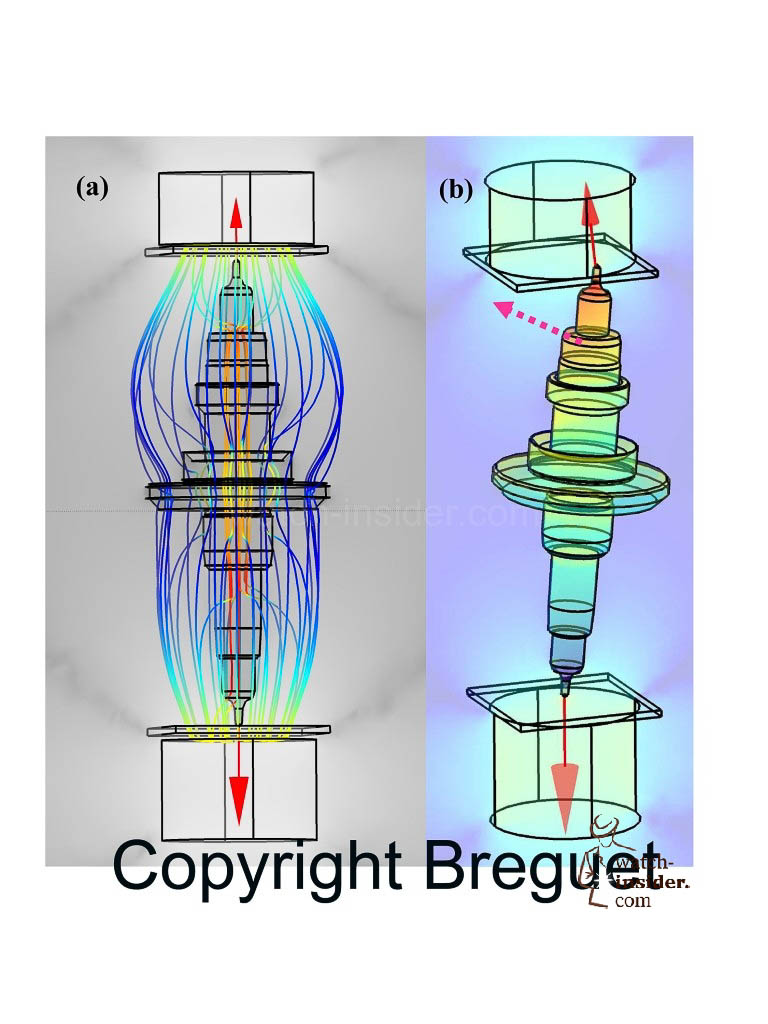 The two magnets don’t interfere with the regularity of the watch’s rate because ten-hertz caliber 574DR relies on nonferrous silicon for the balance-spring, the pallet-lever and the escape-wheel.

Not only can silicon components be manufactured with great precision, they’re also light in weight and unaffected by magnetism.

The doubled balance-spring that’s used here further improves the accuracy of the rate and formatively contributes toward reducing the isochronism error.

The doubled silicon balance-spring and the silicon balance; the two magnets (grey), one at each end of the balance’s staff; and the two red-colored ruby bearings 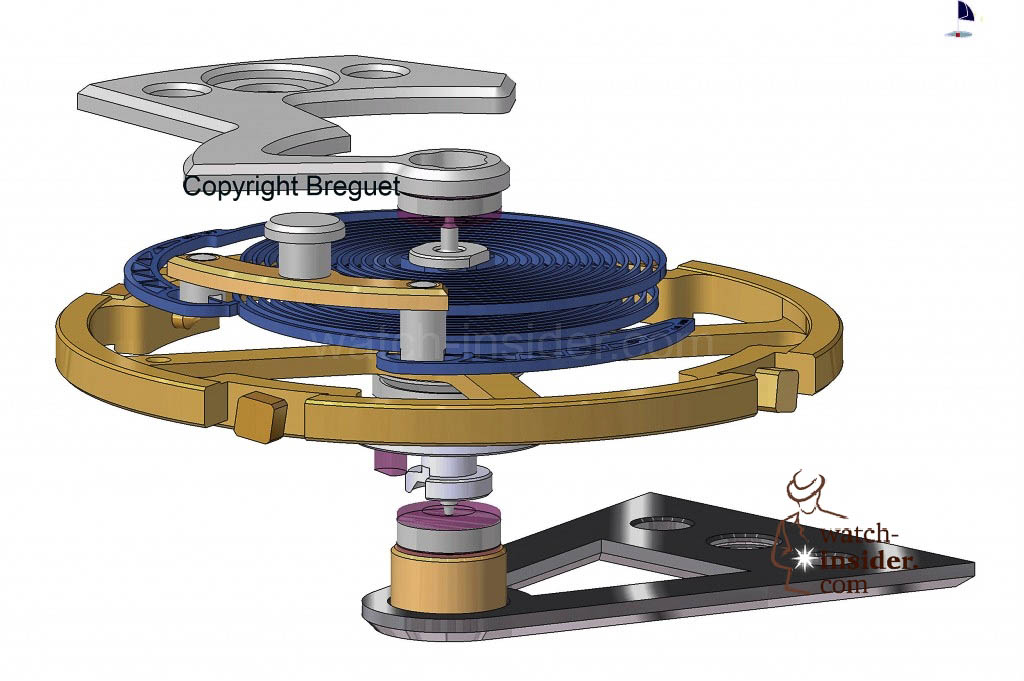 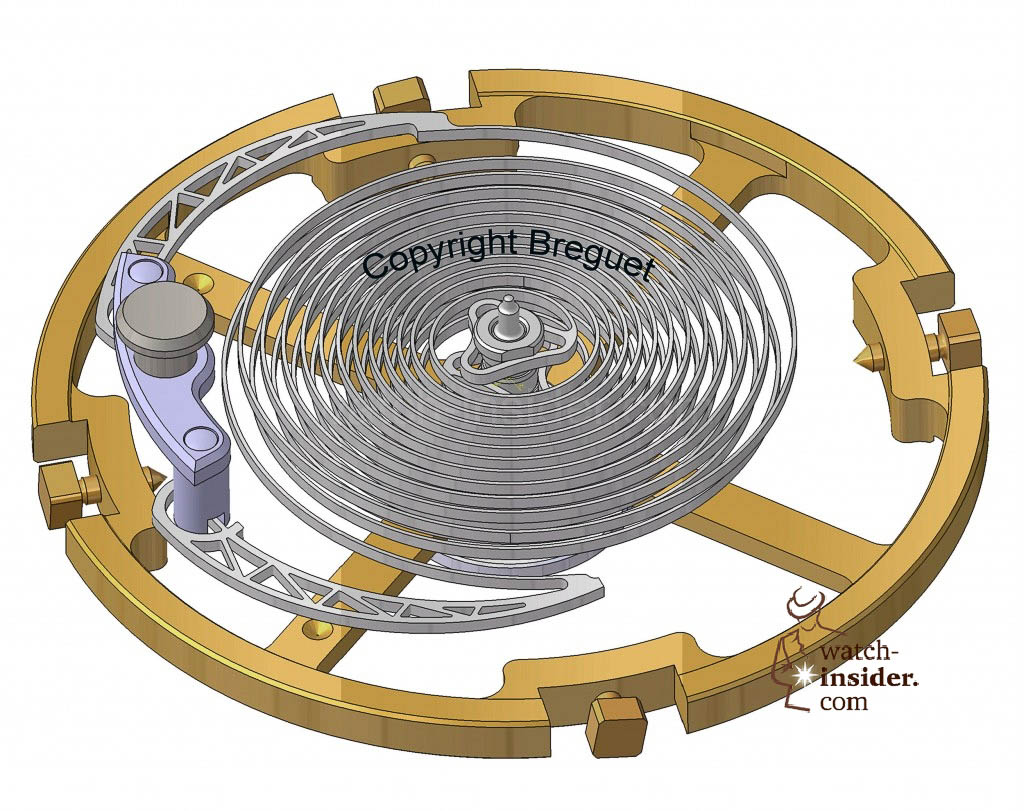 Dial … made of 18 karat rose gold, plated with silver and manually embellished with six different guilloche motifs; individually numbered and signed “Breguet”; off-center hour-circle with Roman numerals; power-reserve display at “5 o’clock,” small seconds at “12 o’clock” and tenths of a second indicated by a small silicon hand at “1 o’clock”. 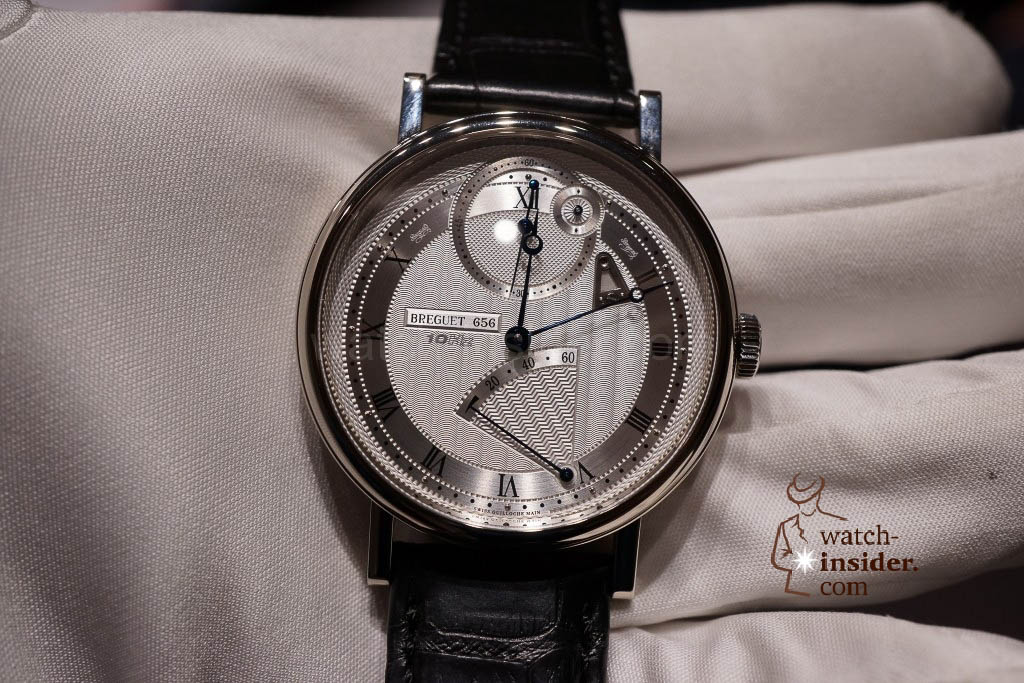 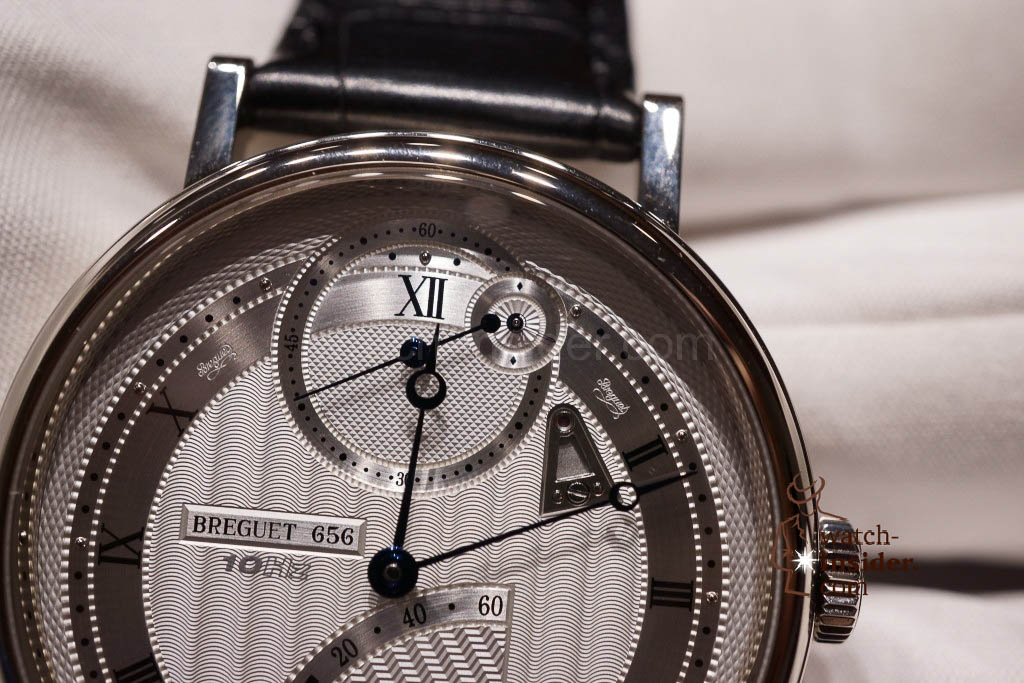 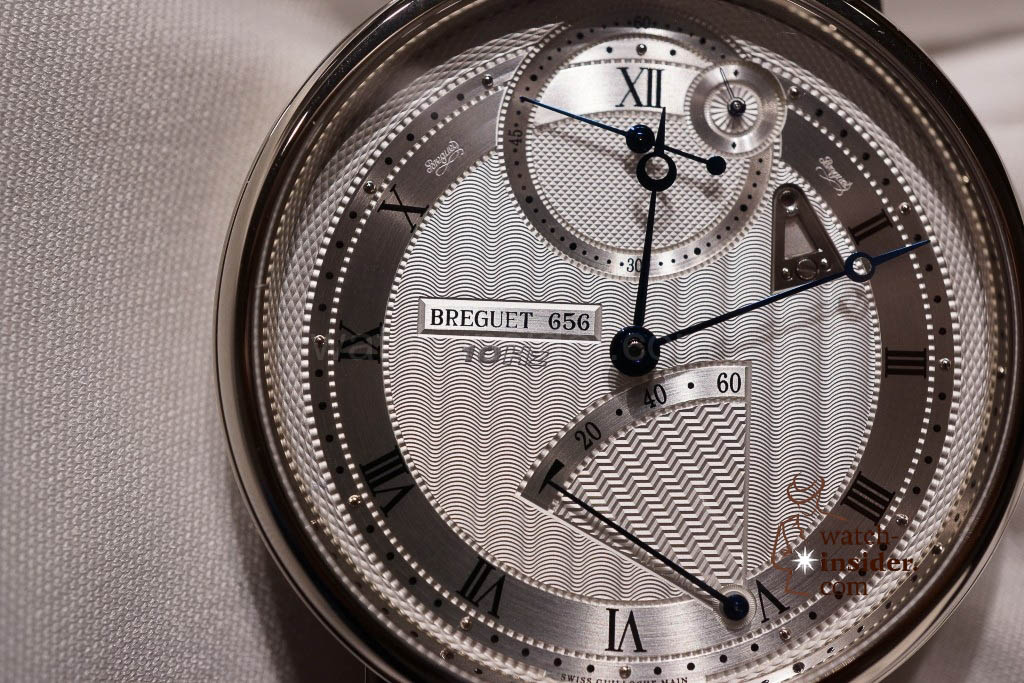 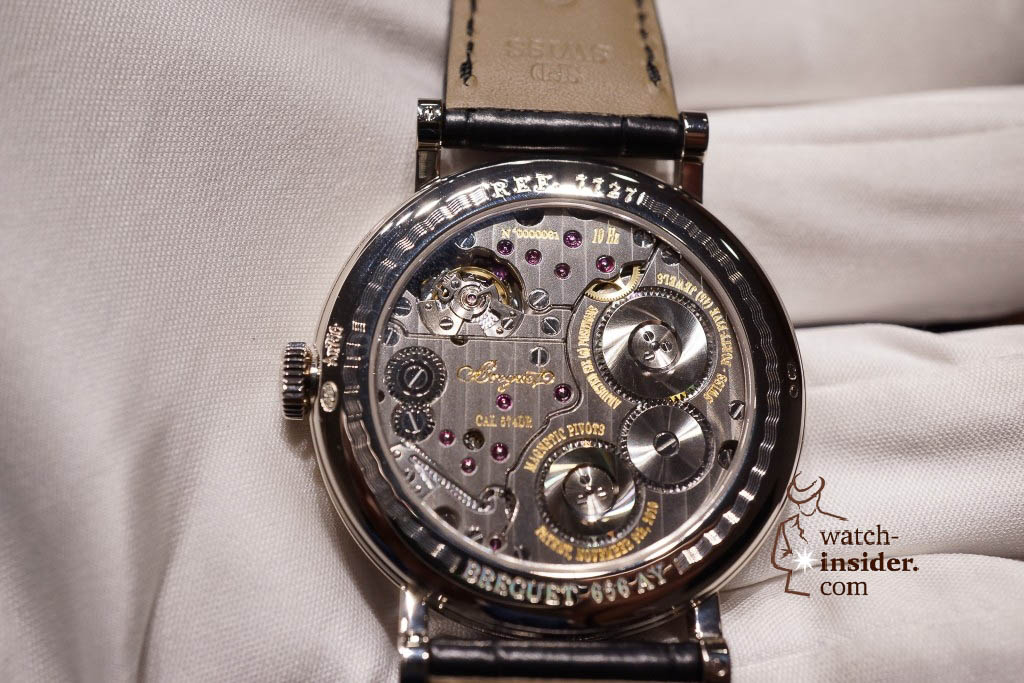 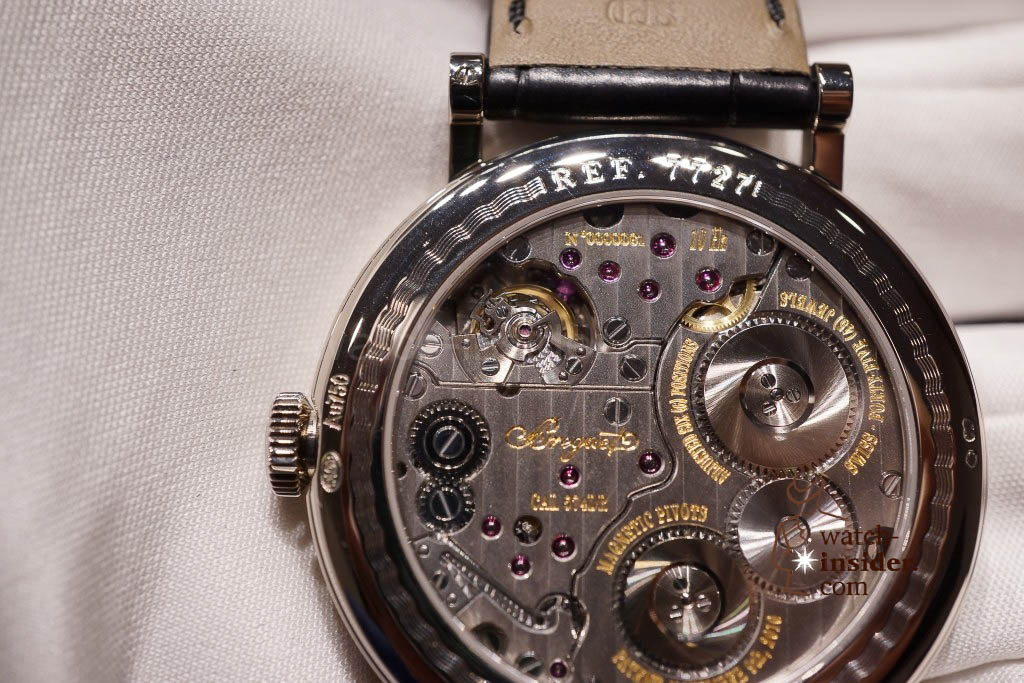 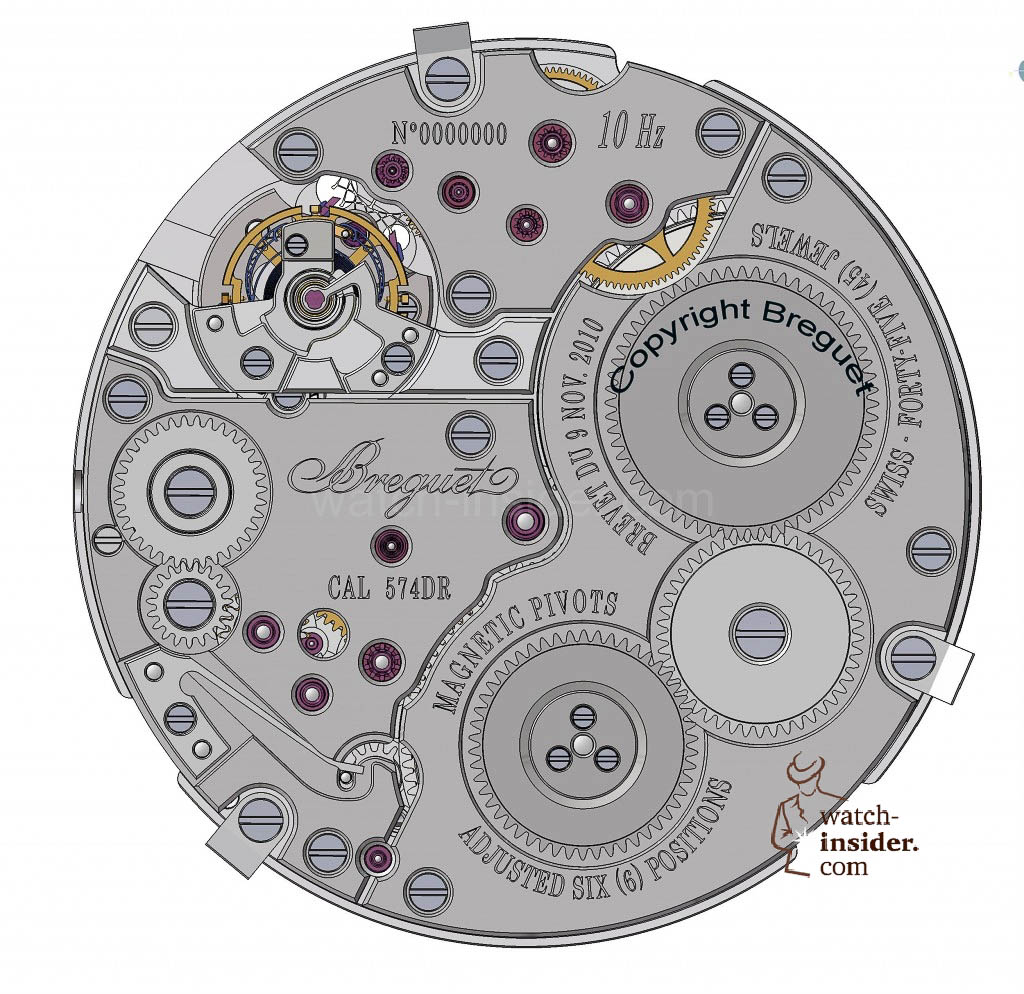 The dial is engine-turned in six patterns: “Geneva waves” in the centre, a hobnail pattern for the small seconds, sunrays on the tenth-of-a-second dial and chevrons for the power-reserve indicator. The hours chapter is cross-hatched while a barleycorn pattern decorates the outer edge. 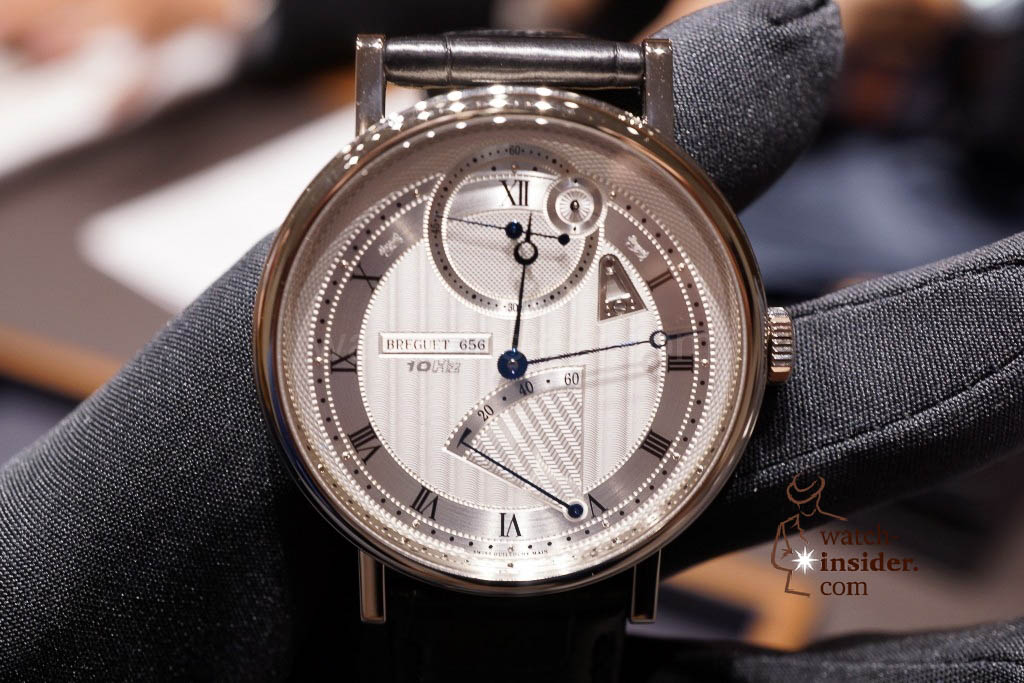 Written By
Alexander Linz
More from Alexander Linz
Only last weekend in Valencia/Spain Tissot unveiled its new MotoGP™-Collection 2015. Among those...
Read More