I was surprised to discover such mature and refined products at Hamilton. Honestly I did not expect that. Let me first show you the new Hamilton watches and then I am very curious to get your feedback.

Before we start allow me a little lesson in history:

Hamilton was founded in 1892 in Lancaster, Pennsylvania, USA. Hamilton watches today combine the American spirit with the unrivalled precision of the latest Swiss movements and technologies. Known for its innovative design, Hamilton has a strong foothold in Hollywood, with products appearing in 400 films. The brand also boasts a strong aviation heritage. Hamilton today is a member of the Swatch Group.

The first surprise was the Hamilton Jazzmaster Face 2 Face. A unique rotating case houses two dials, one presenting a sophisticated “boy racer” chronograph, the other a calm, elegant three-hand timekeeper. Dual existence is the ultimate magical ingredient of fairytales and fantasy movies. Hamilton watches have appeared in a wide selection of movies on this theme, ranging from The Talented Mr Ripley to Spider-Man. The Swiss made American brand treads new watchmaking ground in 2013 by applying the concept of dual identity to its latest innovation. Each individual watch incorporates two wearing options, both making diverse style statements. The two sides can accommodate different time zones, different frames of mind or different outfits. Driving the chronograph is an ETA 2094 automatic movement, while the classical dial derives its energy from the ETA 2671. This watch dares to be different in grand style, with its slightly elongated, rotating oval case measuring 53 mm by 44 mm. The price for the limited edition of 888 pieces: 6195 USD 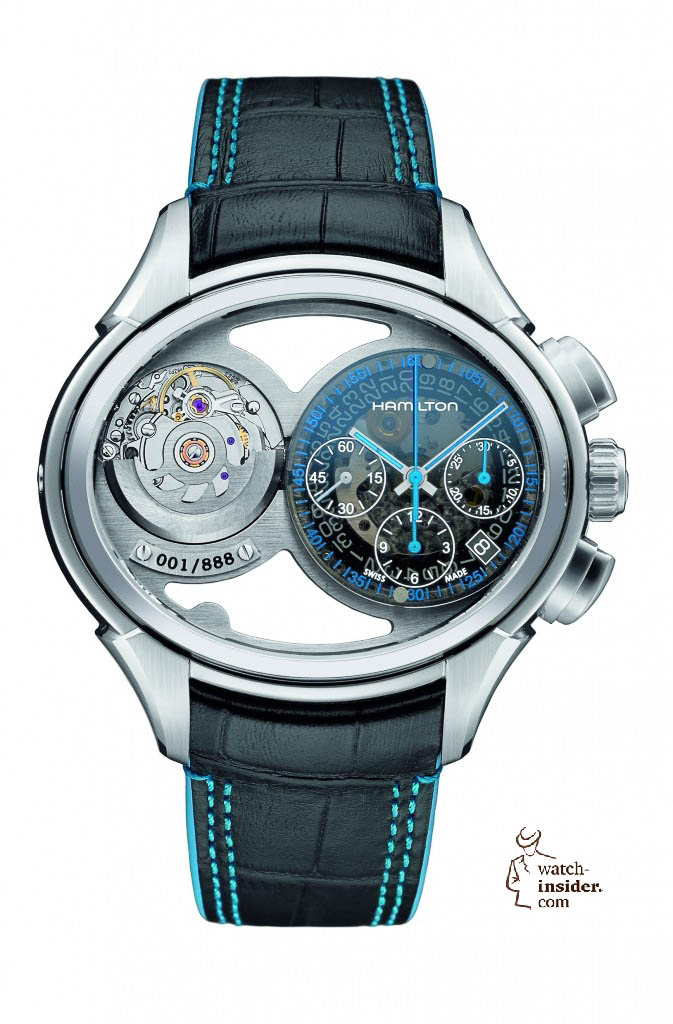 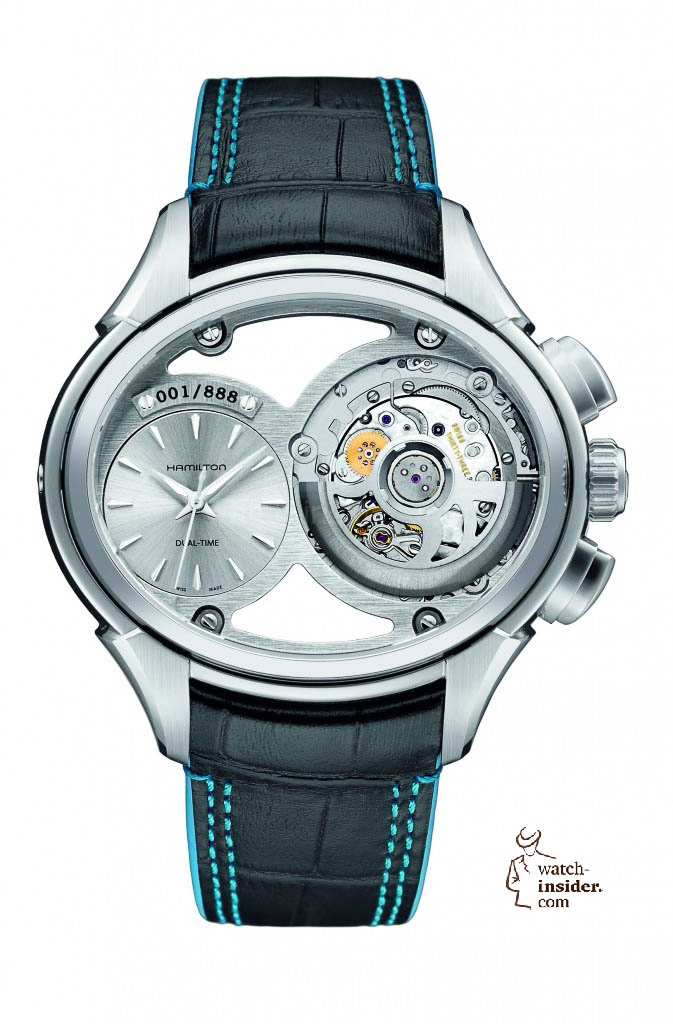 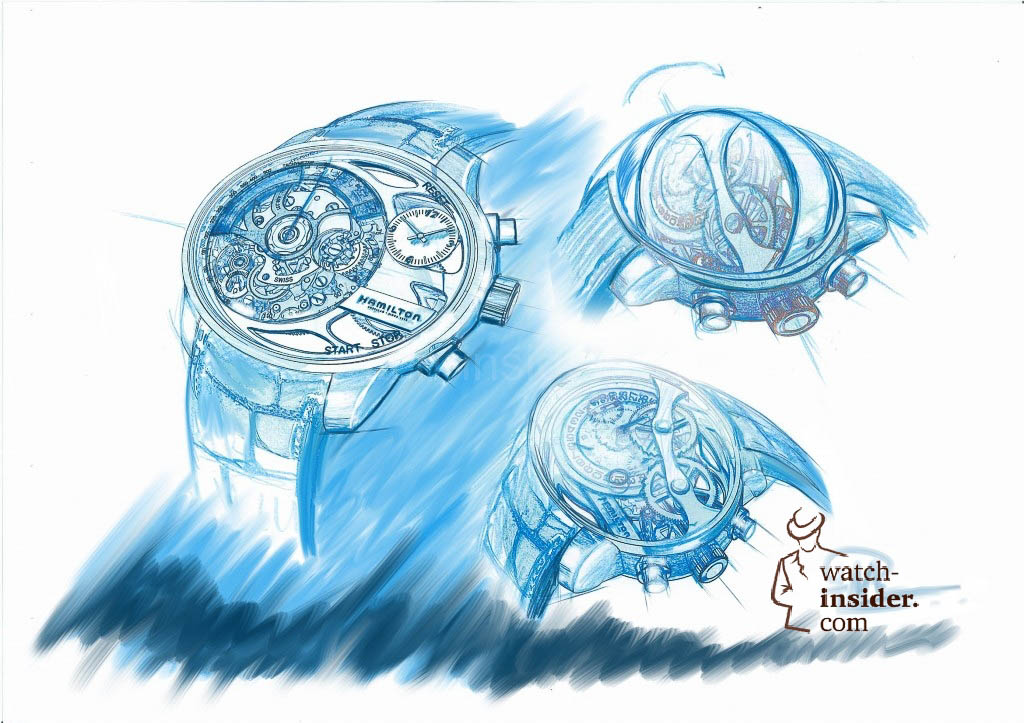 The Hamilton Khaki Sub Auto Chrono is a true celebration of this proven capacity for products that make waves, which has ranged from acting as vital equipment for heroic military divers in The Frogmen (1951), to a lesson in shark-avoidance in the underwater action film, Into the Blue (2005). The spirit of the sea penetrates all aspects of the Hamilton Khaki Sub Auto Chrono’s design. Complementing water resistance to 30 bar (300m) are features ranging from the embossed illustration of a manta ray on the case back, to a super-sporty bezel. The latter offers excellent grip and presents rubber emerging from the stainless steel to create an intriguing 3D effect. The chronograph’s easy-to-grip, screw-down crown and pushers are reminiscent of diving bottle valves, reinforcing the statement of reliability and robustness. Its automatic movement is the Hamilton H-31 caliber (Valjoux 7753), offering excellent accuracy and stability, as well as a 60-hour power reserve. The price: 1995 USD 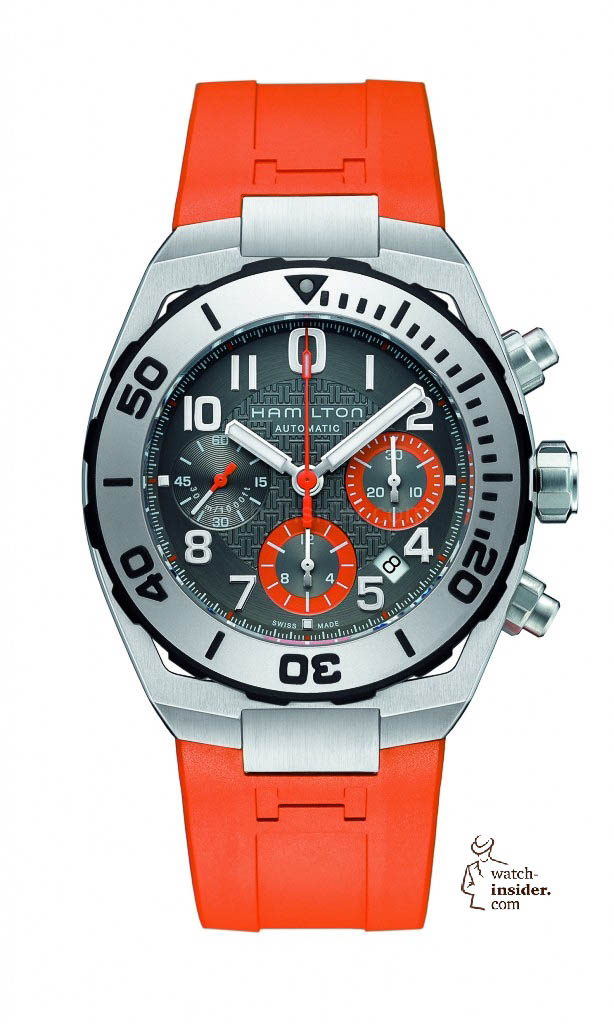 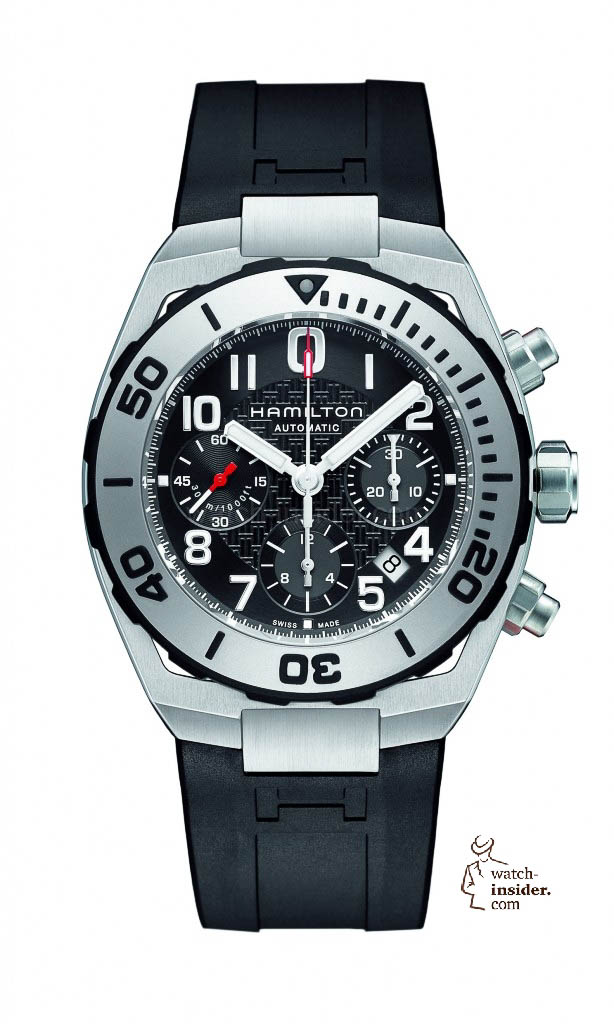 The Hamilton Khaki Pilot Auto Chrono dedicates all of its power to uniting the aspirational quality associated with flight. Inspired by Hamilton timepieces created in the 1970s for the British Royal Air Force, the design team chose clean styling to showcase the new watch’s appealing materials and easy-to-use timekeeping competence. The numbers on the dial are bold to facilitate fast easy reading, and Super-LumiNova® hour indices help in the dark. They are white on the rugged black dial and black against the alternative ivory-colored background. Sandblasted elements on the case remain true to the pioneering aviation roots of the design, protecting the wearer against distracting reflected sunlight. The watch is sold with a variety of bracelets: embracing stainless steel, black leather and a selection of textile straps, including a very appropriate military kaki option. The Hamilton Khaki Pilot Pioneer Auto Chrono is powered by the H-31 movement. A Valjoux 7753 that offers optimal accuracy, stability and power reserve, it can be seen through the open case-back. The price: 1845 USD 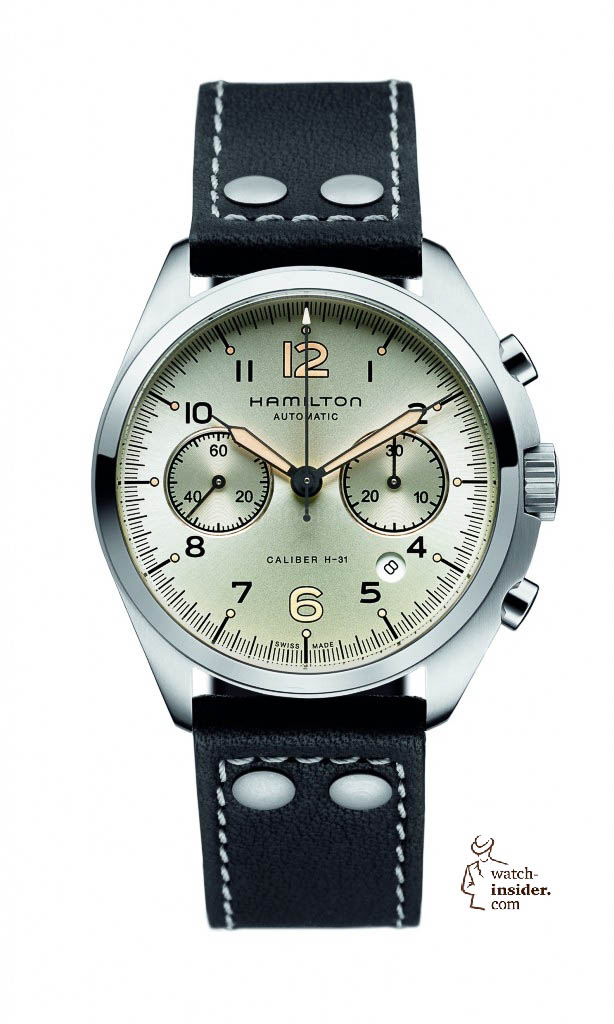 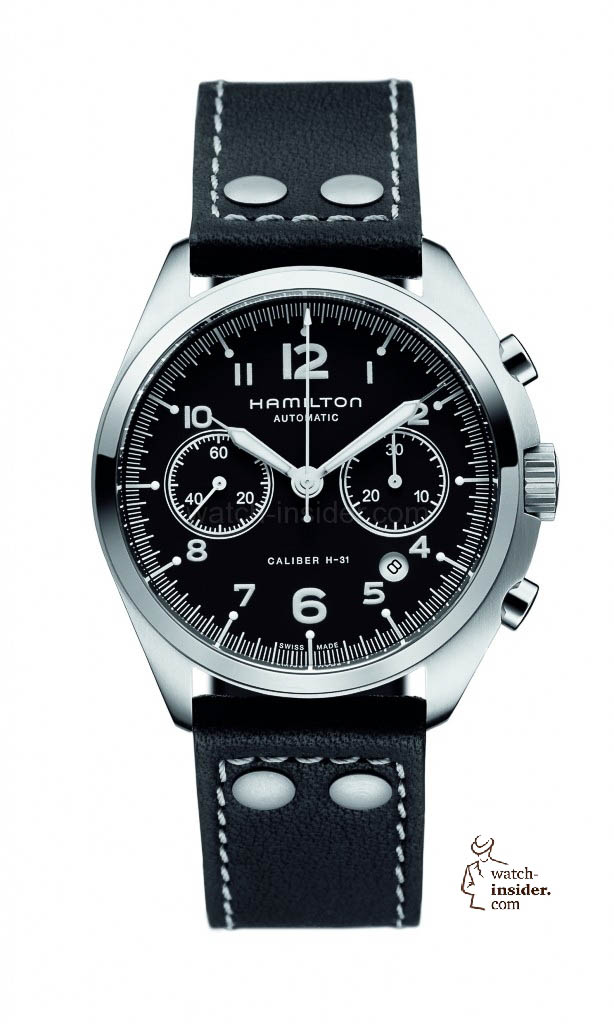 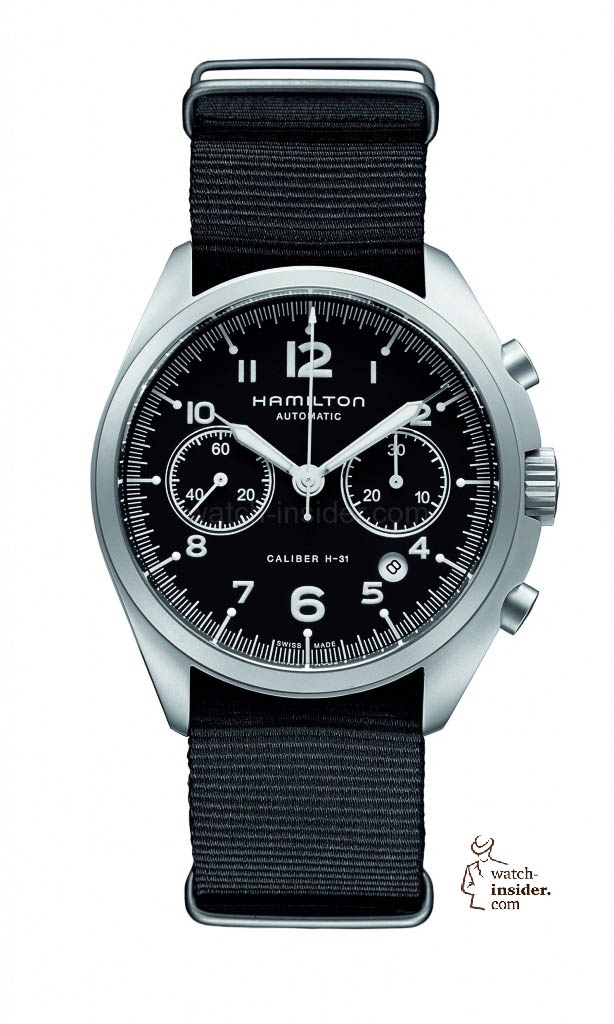 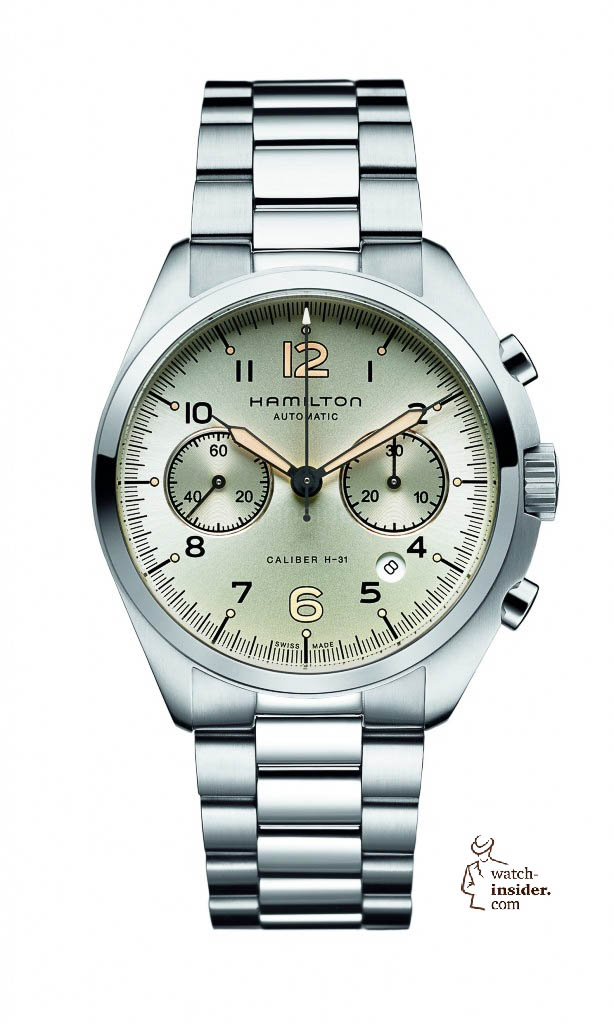 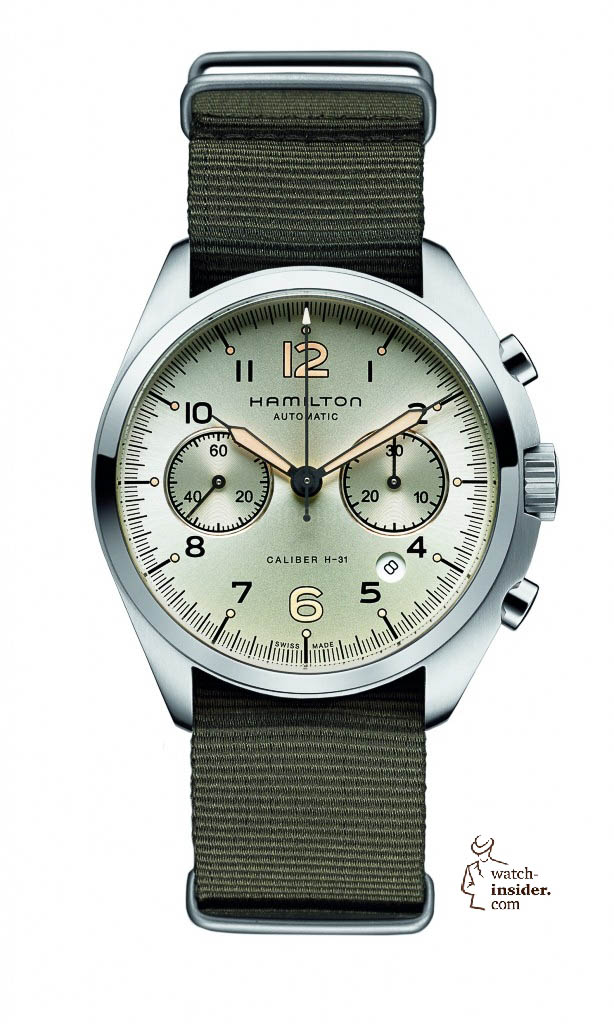 The new H-12 movement in the Hamilton Jazzmaster Regulator gives the face of the watch a unique appearance, presenting an original means of displaying the passage of minutes with a refreshing air of independence. The separation of the minute and hour hands on to different axials and sub-dials has the added advantage of facilitating minute reading at a glance. Inside this contemporary design object, accuracy lives on, perfectly equipped to keep track of wearer lifestyles where every second counts. The regulator complication first appeared in the late seventeenth century and was used by watchmakers for verifying the rates of their creations. Close to the heart of the brand celebrated as the “Watch of Railroad Accuracy” in the 1890s, the regulator was also relied on by railroad staff and made a huge contribution to safety. The price: 1275 USD 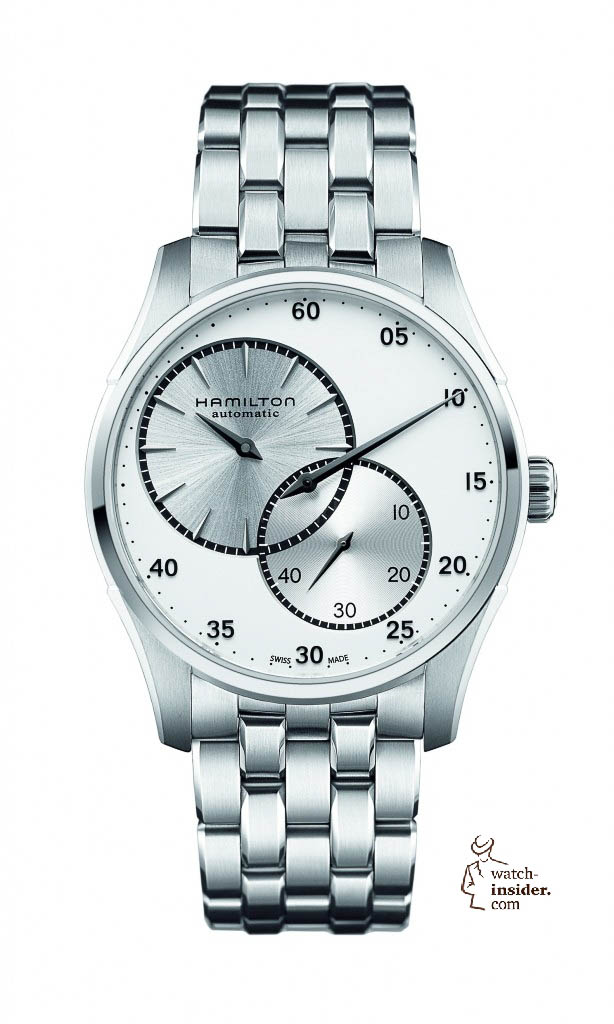 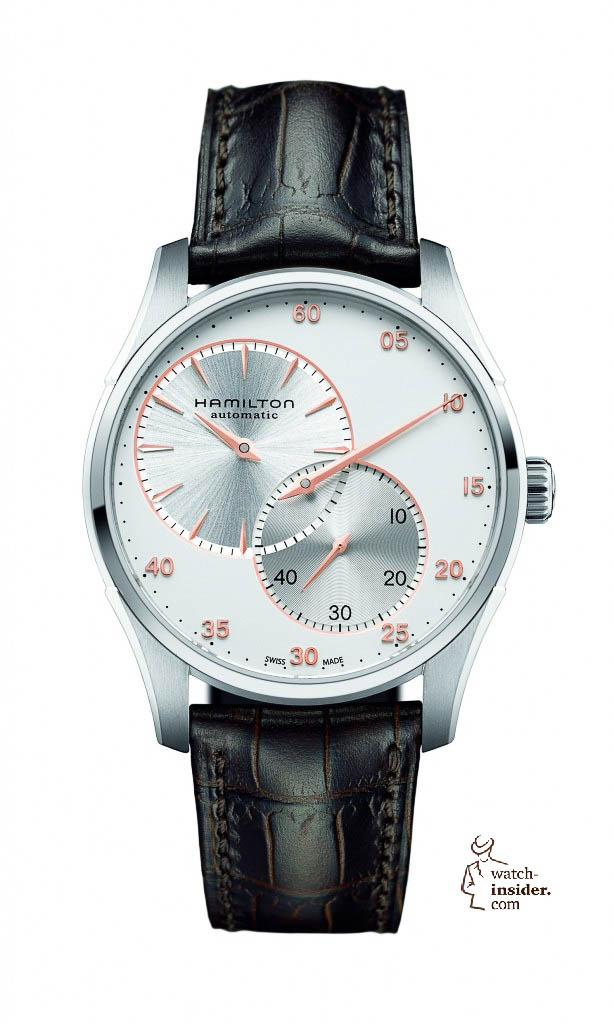 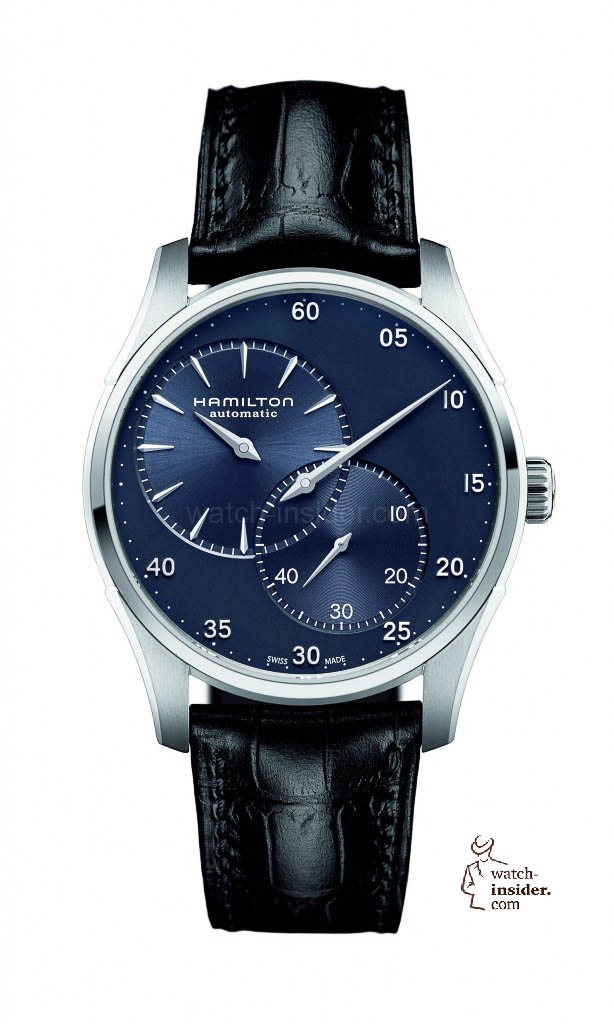 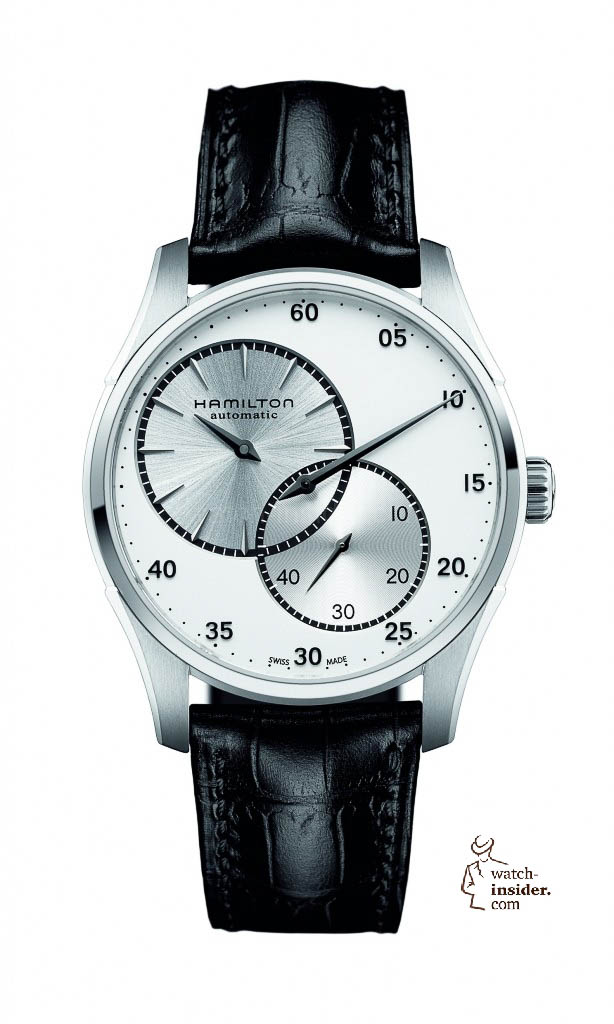 The Hamilton Jazzmaster Viewmatic Skeleton Gents incorporates a fascinating session of “show and tell”.  On show on both sides of the timepiece are the ultra-modern watchmaking techniques employed to create the H-20-S “engine” of the watch, telling the story of aesthetic mechanics meeting bold masculinity. Angles and curves join forces to make the dramatic, anthracite-colored cut-outs occupying the majority of the dial and even offering stolen glimpses of the wrist below. Framing this are cleverly constructed, multi-level rings displaying detailed markings from 0 to 60 and the branding. The price: 1195 USD 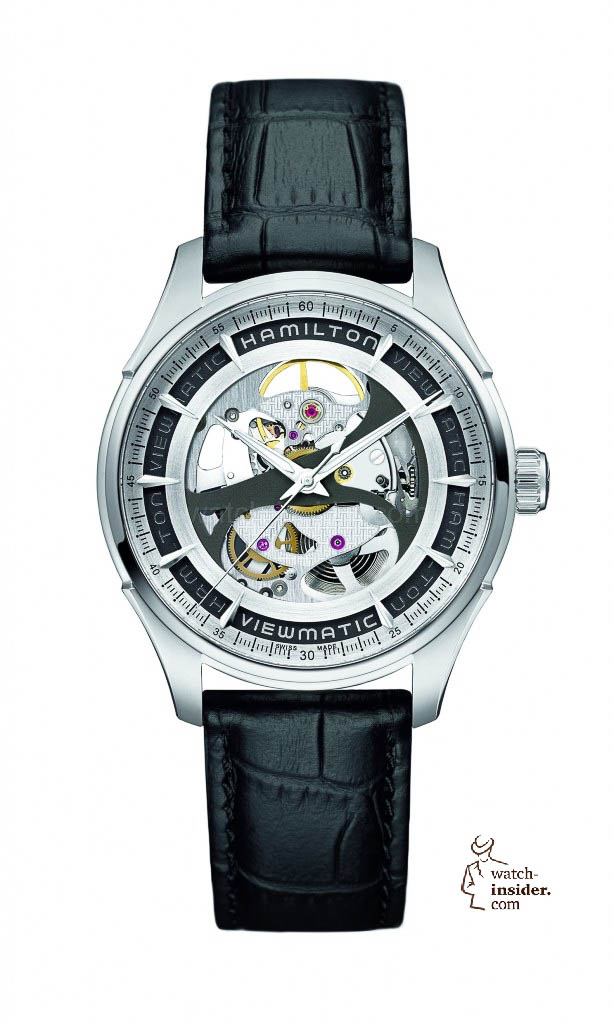 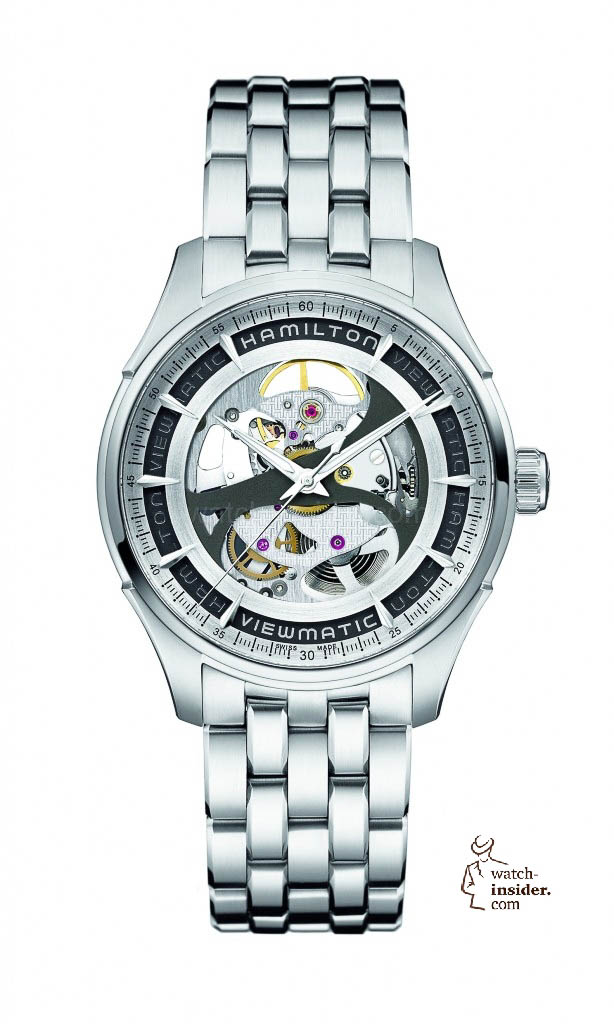 The Hamilton H-31 and H-21 have their watchmaking roots in the ETA 7753 and 7750 chronograph Valjoux movements. From the barrel to the mainspring, the entire kinematic chain of the two new movements has been refined to increase the power reserve from 42 to 60 hours and assure optimal reliability and accuracy. Excellent stability and precision come from the glittering of the spiral. At the same time, the newly designed automatic device bridge affords possibilities for special decoration, personalizing the movement to the brand.