Here’s a classic diver to take into consideration, the Blancpain Fifty Fathoms. First launched in the early 50’s just like the Rolex Submariner and still available in a design that remained close to that original. However they made the Fifty Fathoms models available in more configurations through the years. For me personally I prefer a diver to be as basic as they come which is just a time display, date window and diving bezel. The Fifty Fathoms is a good example of this and also comes with a rich history.

Blancpain introduced the Tribute to Fifty Fathoms MIL-SPEC during Baselworld earlier this year. Mil-spec is short for ‘military specification’ which means it meets up with specific requirements for the military. Back in the late 50’s Blancpain made a mil-spec version of their Fifty Fathoms with a moisture indicator on the dial, the Mil-Spec 1. Now there is a modern version of that watch. 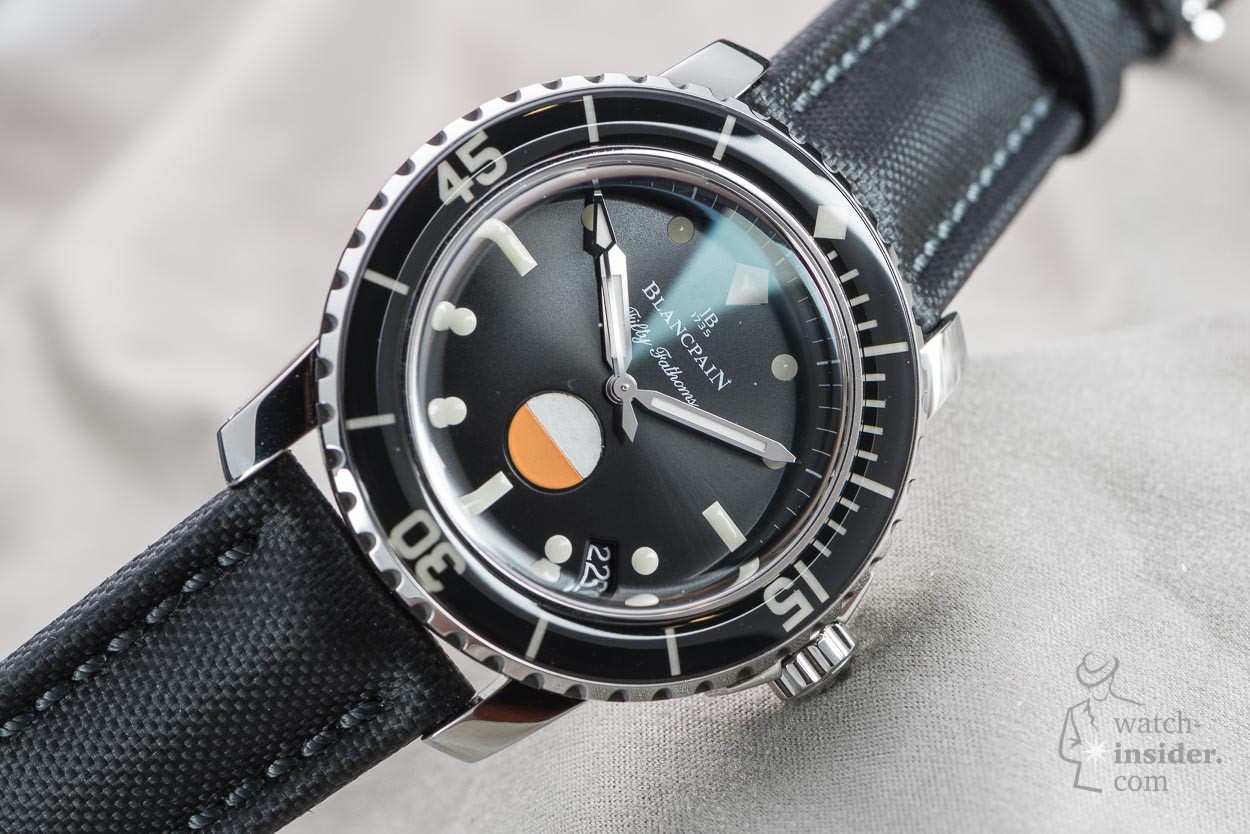 The Blancpain Tribute to Fifty Fathoms MIL-SPEC comes in the perfect 40mm sized case in stainless steel. On top of that it has an automatic in-house movement which comes with an impressive 4 day power reserve. Actually a little more as it is 1oo hours. This diver is waterproof up to 300 meters and on top of that there is the moisture indicator on the dial. Should there be any  kind of leaking going on, the indicator on the dial will change colour so you will notice straight away. All together it’s an impressive diver which retails for just over 13.ooo euro. 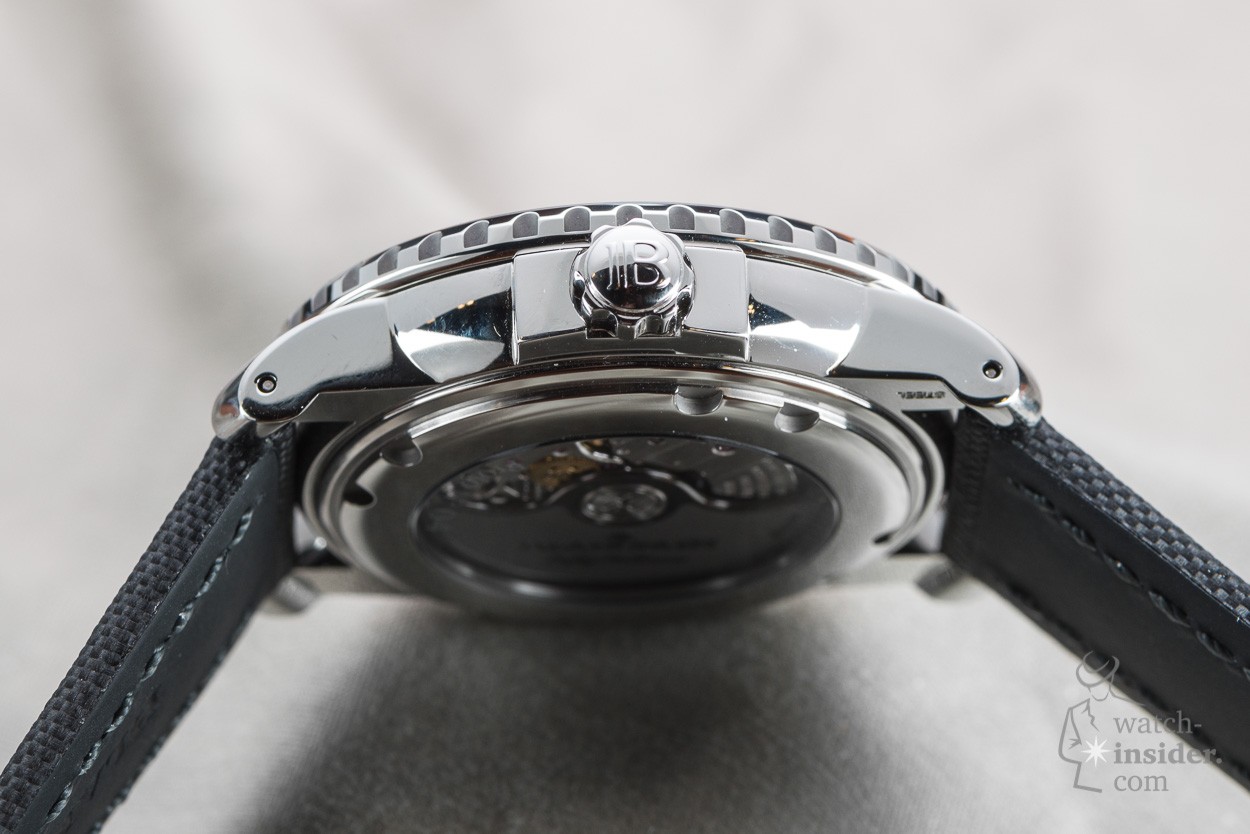 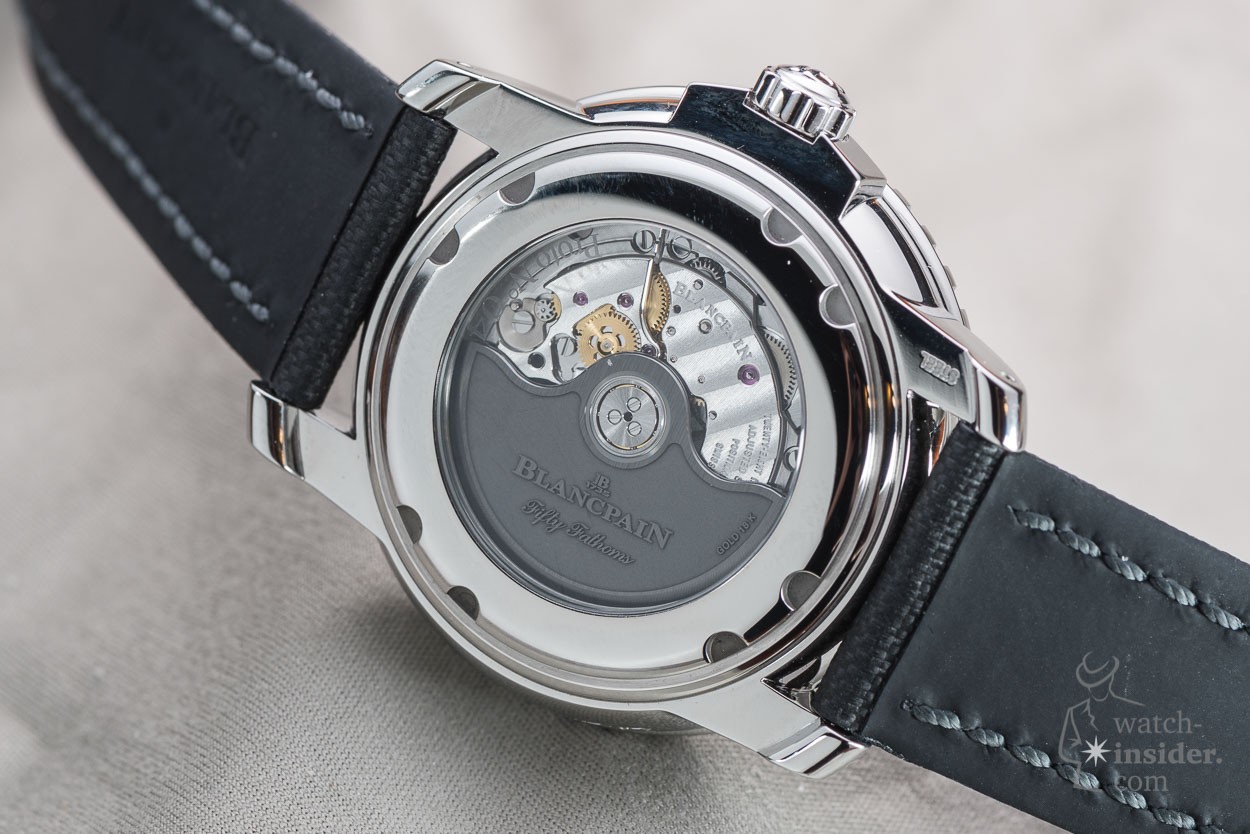 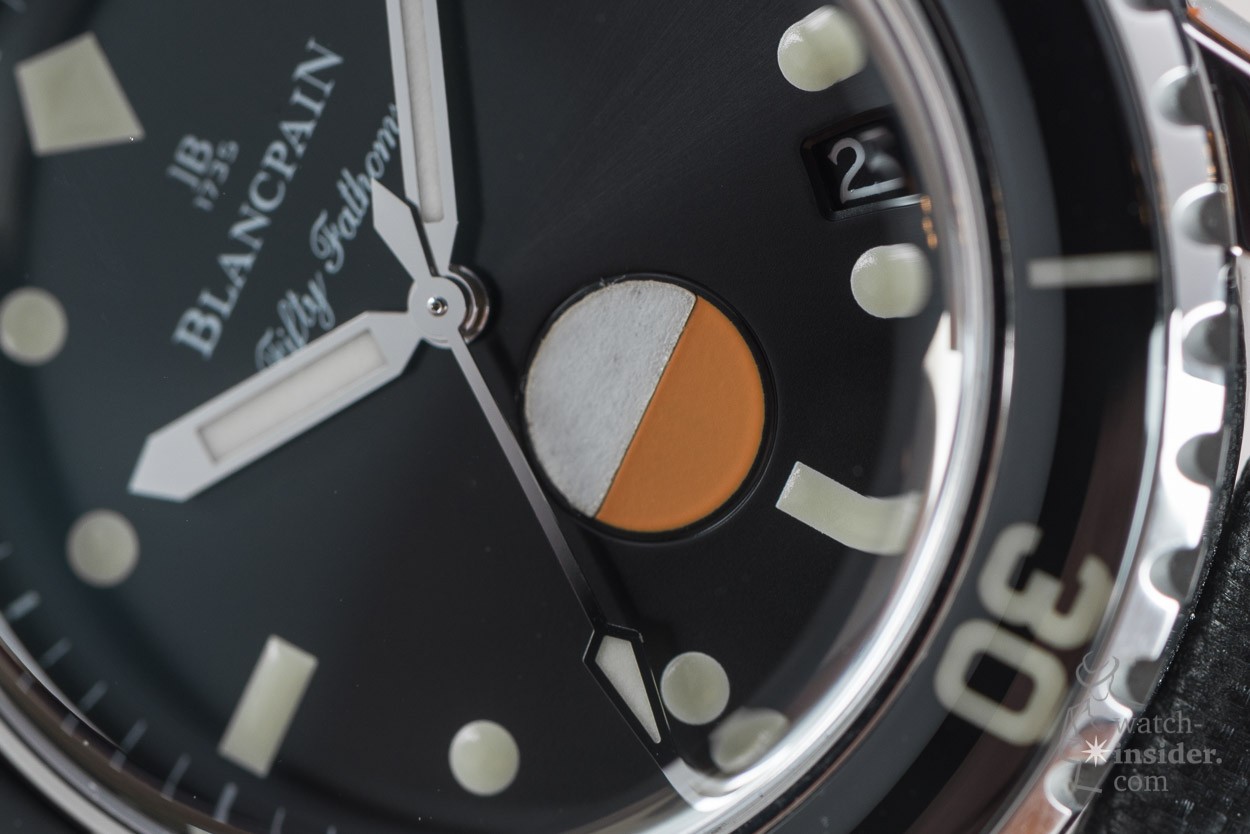 Hope you like the live photos we took of the Tribute to Fifty Fathoms MIL-SPEC and below you will find the press info from Blancpain.

The history of the Fifty Fathoms brings together two lineages. First is that of Jean-Jacques Fiechter a passionate diver who was Blancpain’s CEO for three decades, 1950-1980. The second is that of Captain Robert “Bob” Maloubier and Lieutenant Claude Riffaud. Founders of the French Navy’s combat swimmers corps and who were searching for a reliable watch for their underwater missions. 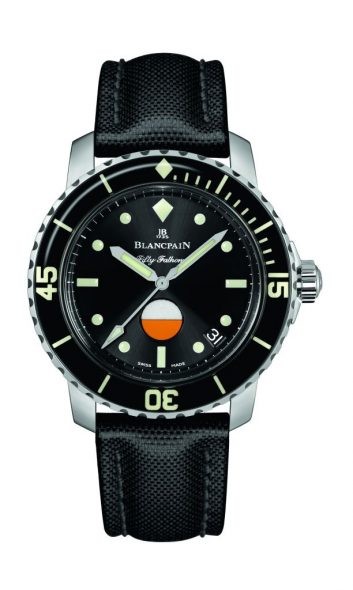 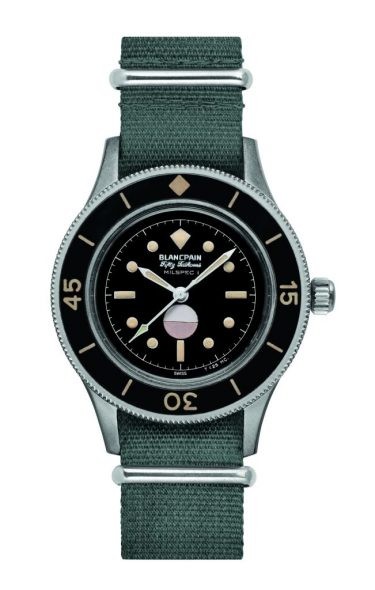 In the early 1950s, Jean-Jacques Fiechter was a sport diving pioneer. Based on his personal underwater experiences, he came to understand that a diver’s life depended upon a reliable timekeeping instrument. He saw that none existed in the marketplace thus being head of Blancpain, he tasked his watchmaking team with addressing the challenges of measuring time in the underwater environment.

The first criteria was obvious: water resistance. To solve this problem he set about conceiving a double sealed crown system. This protects the watch from water penetration should the crown accidentally pulled out during a dive. The presence of the second interior seal worked to guarantee the timepiece’s water tightness. Jean-Jacques Fiechter registered a patent for this invention. A second patent was awarded for the sealing system for the caseback. This had indeed been a recurring problem with other pre-existing systems because of the way in which the “O” ring, used to seal the caseback, might become twisted when the back was screwed into the case. In order to eliminate this risk, Fiechter invented a channel into which the “O” ring would be inserted and held in position by an additional metallic disk.

He then addressed another problem: a secured rotating bezel that could be used to measure the time of a dive. His idea was to rotate the bezel so as to place its zero index opposite the minutes hand. In this way, the diver could read the passage of time while underwater using the minutes hand to read markings on the bezel. Here too, security was front and center in Fiechter’s thinking. Any accidental movement of the bezel could induce a timing error with dramatic consequences. Fiechter therefore perfected a blocking mechanism which would prevent accidental rotation of the bezel. For this he received another patent. Later, Blancpain introduced a uni-directional rotating bezel, a world-first feature which also ensured safety during a dive.

Readability was also recognized a vital factor, in particular during dives in cloudy water. So Jean-Jacques Fiechter came up with the idea of endowing the Fifty Fathoms with large diameter. Also giving it the bold contrast of white luminescent indexes and hands set against a black background. Automatic winding of the movement was also seen as essential in this construction, as it would reduce the wear of the crown against its seals in comparison to manual winding.

In parallel, beginning in 1952, Bob Maloubier and Claude Riffaud began their quest to find a watch suited for their aquatic missions. The two officers envisaged finding a watch that would become an indispensable piece of equipment for their divers. Working together, they assembled a list of specific criteria for an instrument that would meet their requirements. The first tests which they conducted with water-resistant French watches were disastrous. These watches were far too small, the dials were hard to read, and the cases were far from water proof.

The paths of these two sets of visionaries finally crossed. In 1953, Blancpain was able to deliver to the French team a watch for testing that fully met their criteria. The watch performed brilliantly in all of the tests and it became one of the essential pieces of equipment for the French combat swimmers corps. Later, the same occurred for naval forces around the world. It was a unique timepiece: the Fifty Fathoms.

Jean-Jacques Fiechter continued with his pre-occupation for diver safety and soon incorporated an additional feature for his watches: a circular water-tightness indicator. If, by chance, liquid were to leak into the watch case, a disk at 6 o’clock would signal the problem by changing its color from white to red. This water-tightness indicator was present on the dial of the Fifty Fathoms model called the MIL-SPEC 1, which was introduced in 1957-58 to meet the strict requirements of the military. Beginning in 1958, the American Navy tested a variety of different watches with the goal of drawing up speci cations for a timepiece to be used in their underwater missions. 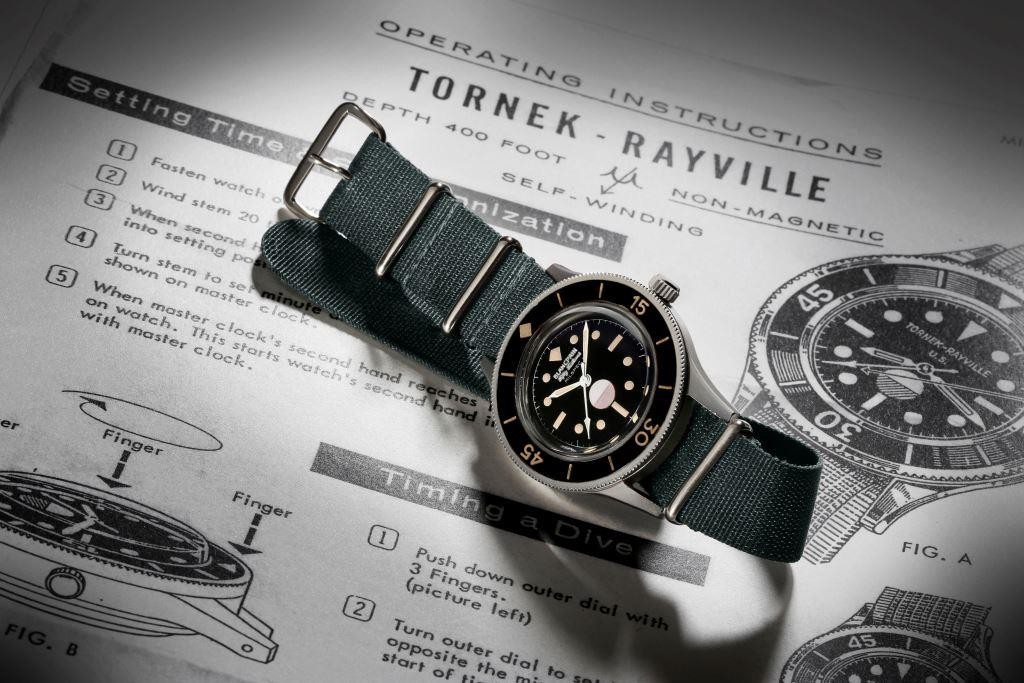 Following those tests, the Fifty Fathoms became the standard-issue watch on the wrists of American combat swimmers, as well as the reference point for future production to take place in the US. Meanwhile, Blancpain obtained contracts to equip members of the elite UDT and the Navy Seals with MIL-SPEC 1 watches. Later on, in the early 1960s, those evolved into the MIL-SPEC 2 and, using the name “Tornek-Rayville”, the TR-900. The water-tightness indicator was a requirement of the American Navy, and was incorporated in all these models.

The “Tribute to Fifty Fathoms MIL-SPEC” is comes with Blancpain’s in-house automatic winding caliber 1151. Comprising 210 components including two series-coupled mainspring barrels and offering a four-day power reserve. Nestled into its stainless steel 40mm case. The movement as well as its solid gold winding rotor with a NAC coating (a platinum alloy) and Blancpain logo. Both are visible through the clear sapphire case back. The balance-spring is in silicon, a material that offers many advantages. Firstly, its low density makes it lighter and thus more shock-resistant. In addition, it is impervious to magnetic elds. The resulting balance spring is ideally shaped, thus ensuring improved isochronism performance of the movement, resulting in enhanced timekeeping precision.

This new model naturally features the entire set of technical characteristics of a watch dedicated to diving. Established by the original 1953 Fifty Fathoms and later followed by the entire watch industry. It’s black dial features indexes in Super-LuminNova® and a water-tightness indicator recalling the designs of the 1950’s MIL-SPEC 1. The unidirectional rotating bezel covered in scratch-resistant sapphire. This is a Blancpain innovation that first appeared in 2003 with the 50th Anniversary Fifty Fathoms which protects the luminescent indications underneath.

This timepiece is water resistant to 30 bar, which is equivalent to 300 meters. Limited to 500 watches and offered with a NATO strap, sail cloth strap, or steel bracelet with a secure buckle.