The Monaco V4 started a new era at TAG Heuer. The company finally changed from being more marketing driven to become a manufacturer of own movements.

The TAG Heuer Monaco V4 was at the time an incredible achievement. After being presented just as concept watch at Baselworld almost no one believed that this “crazy” concept watch would ever become reality and also be sold.

To be honest I was among the critics of the project, because I thought this was only done to gain some extra attention during the Baselworld watch and jewelry show. But TAG Heuer proved doubters like me wrong.

It took the R&D team five years of relentless effort to turn the concept watch into a commercial reality. The patented belt-driven transmission is a high-yield relay of five notched micro drive belts whose tension is controlled by two turnbuckles. A second patent was granted for the innovative linear mass, replacing the classic oscillating mass. Mounted on the world’s smallest ball bearings, the 12-gram tungsten ingot moves up and down between two pairs of V-shaped barrels (hence the name V4). The barrels are angled at +/- 13 degrees, like the cylinders of a high-performance racing engine.

With its square shape and automatic chronograph, the Monaco V4 recalls the original Heuer Monaco series. In my eyes one of the coolest watch ever built. The Monaco´s V4 complex design, clearly visible through sapphire glass front and back, shows how truly evolved watchmaking can become.

The case of latest Monaco V4 is made of Titanium Grade 5, a special alloy used in aircrafts, turbines and surgical implants.

The Monaco V4 Titanium and Ceramic boasts completely revisited finishes, with a high-resistance black ruthenium coating on the main plate and Côtes de Genève decorated bridges. The beautiful black juxtaposes superbly with the white “V4” and “TAG Heuer” engravings on the dial.

The first patented belt-driven transmission in a watch movement

2 pairs of barrels in series, set in parallel and linked by belts

Escapement and belt-driven transmission visible from the front

This video shows you the linear mass, replacing the classic oscillating mass. Do also listen to the “sound” of it!

A personal tip: by magnifying my photos taken with a macro lens you can perfectly see the belts 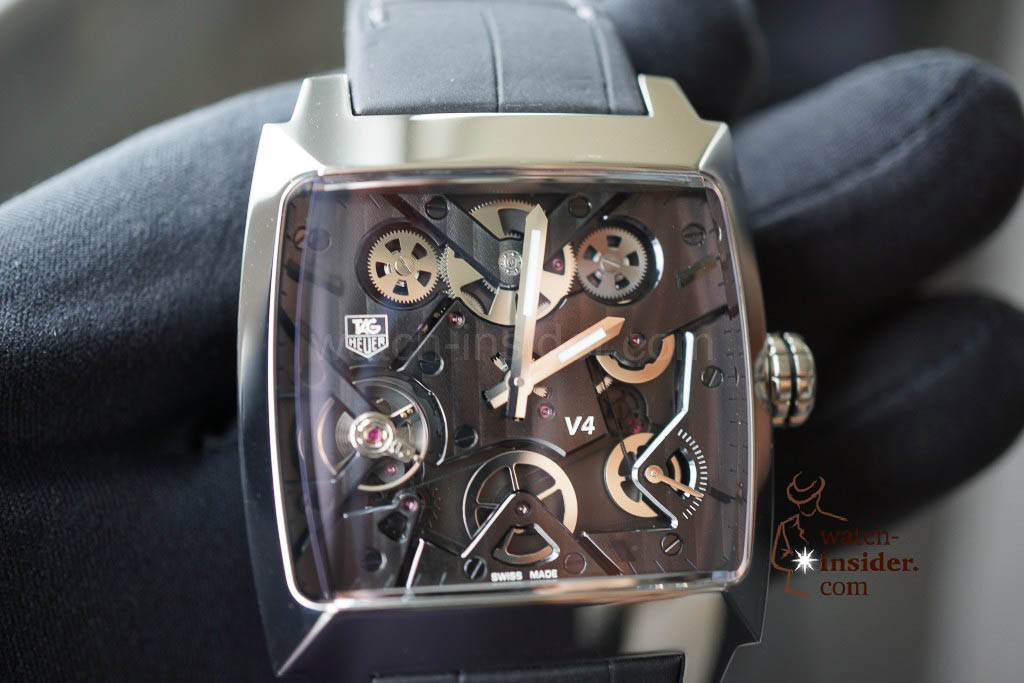 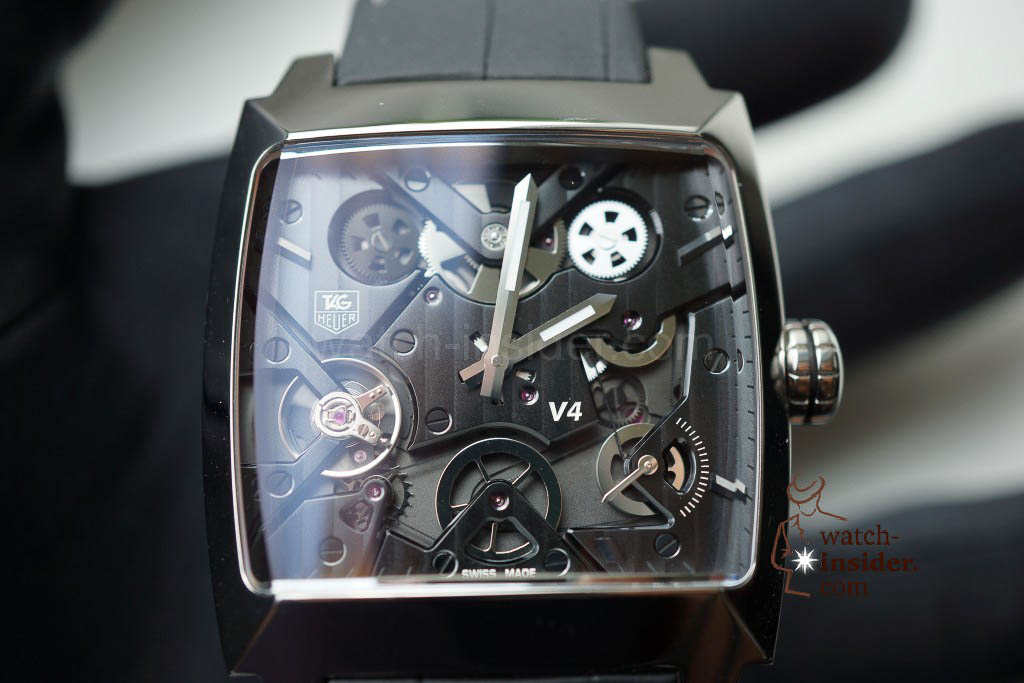 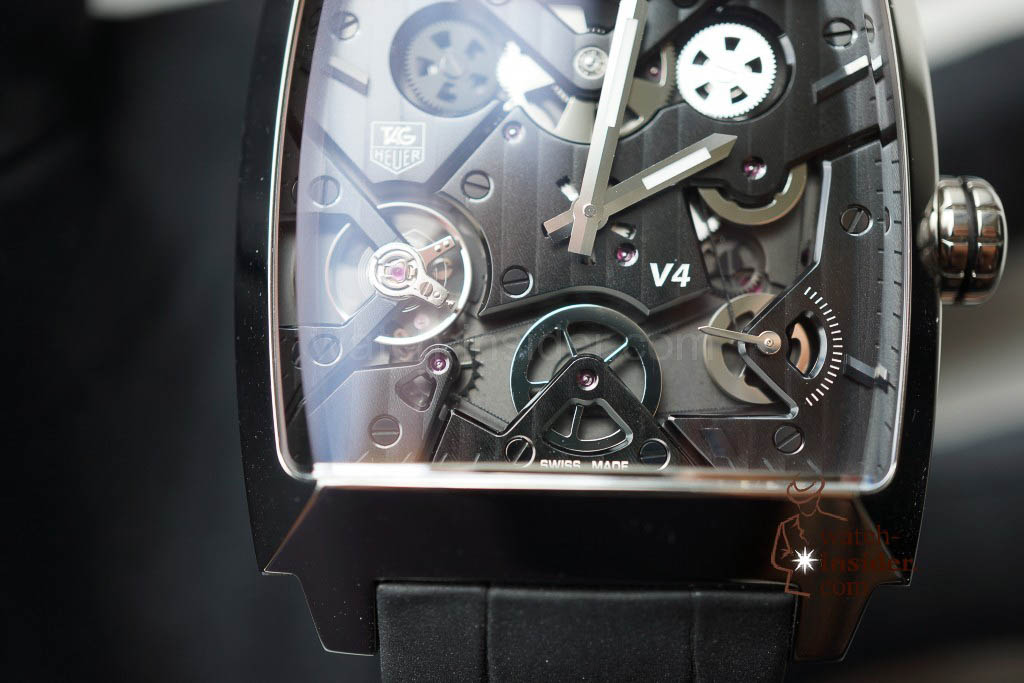 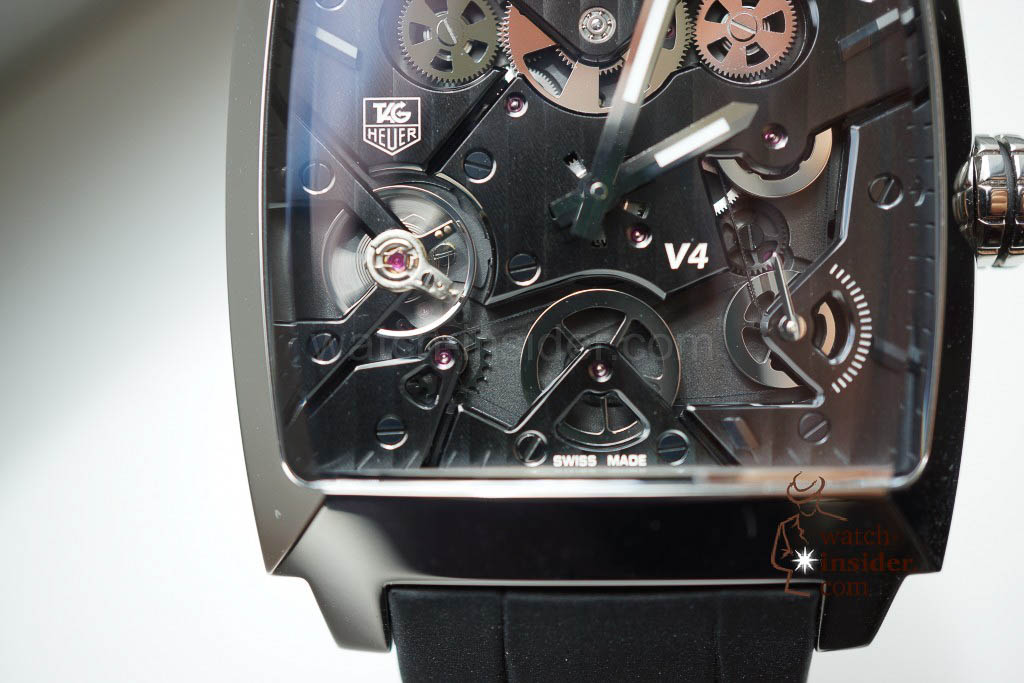 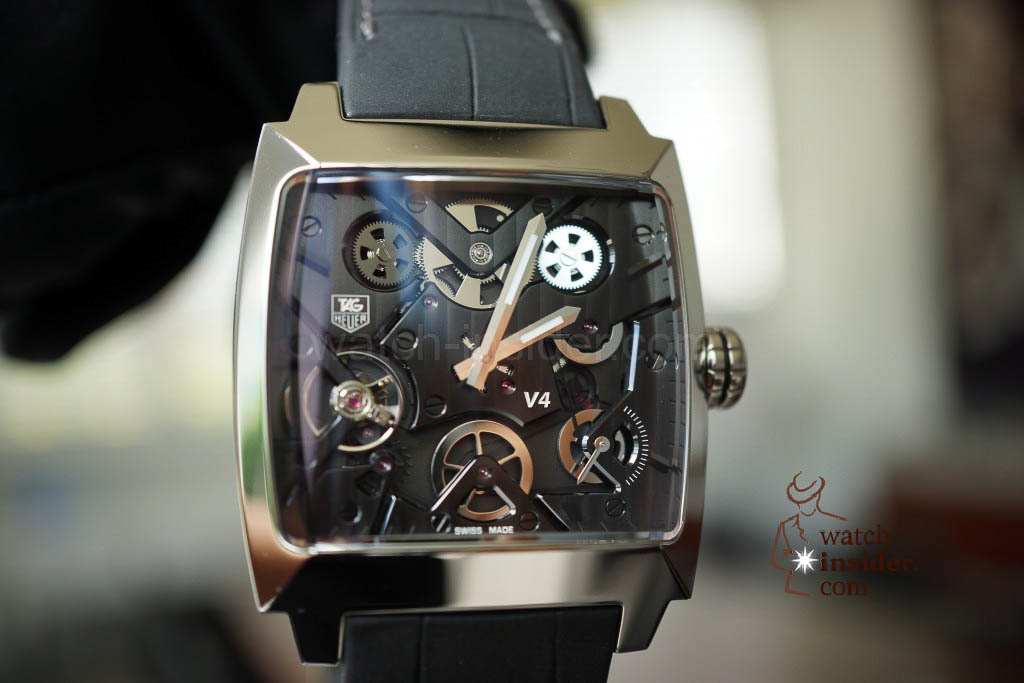 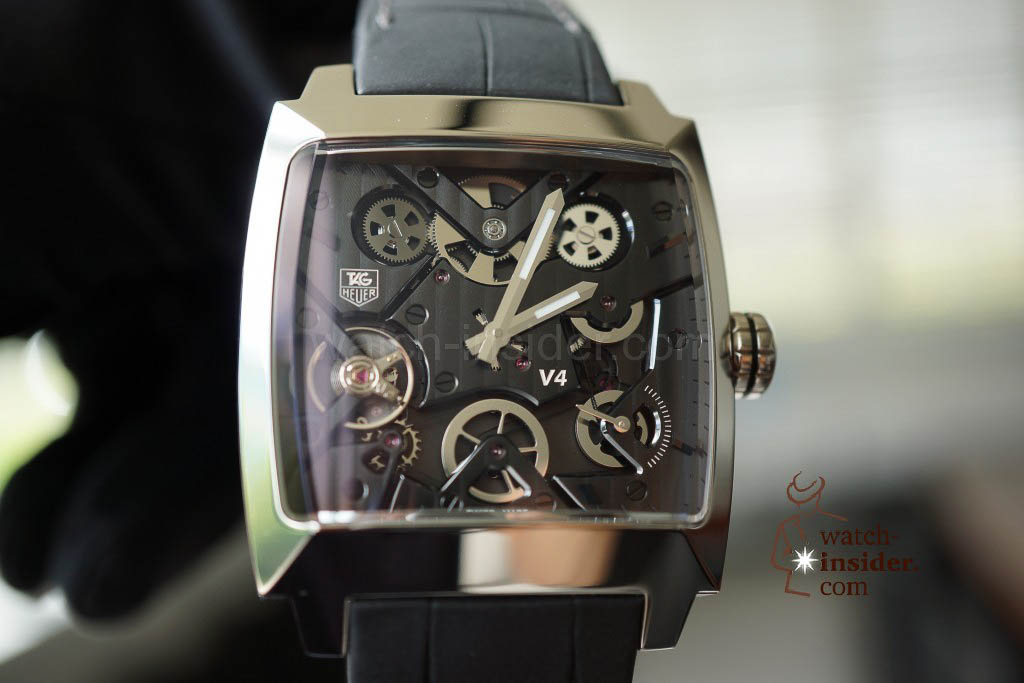 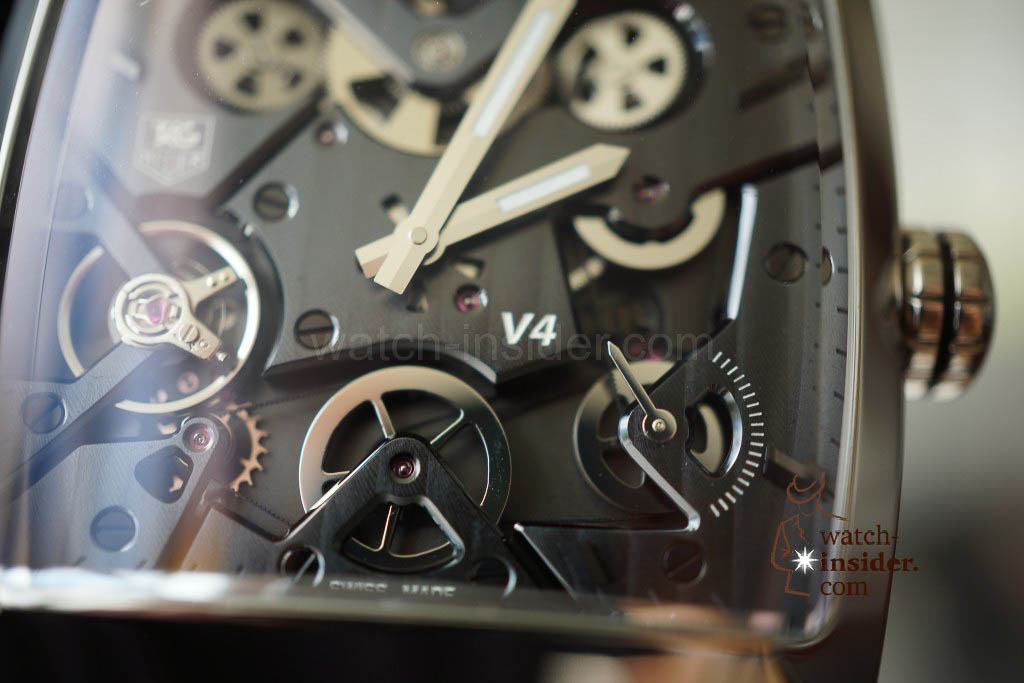 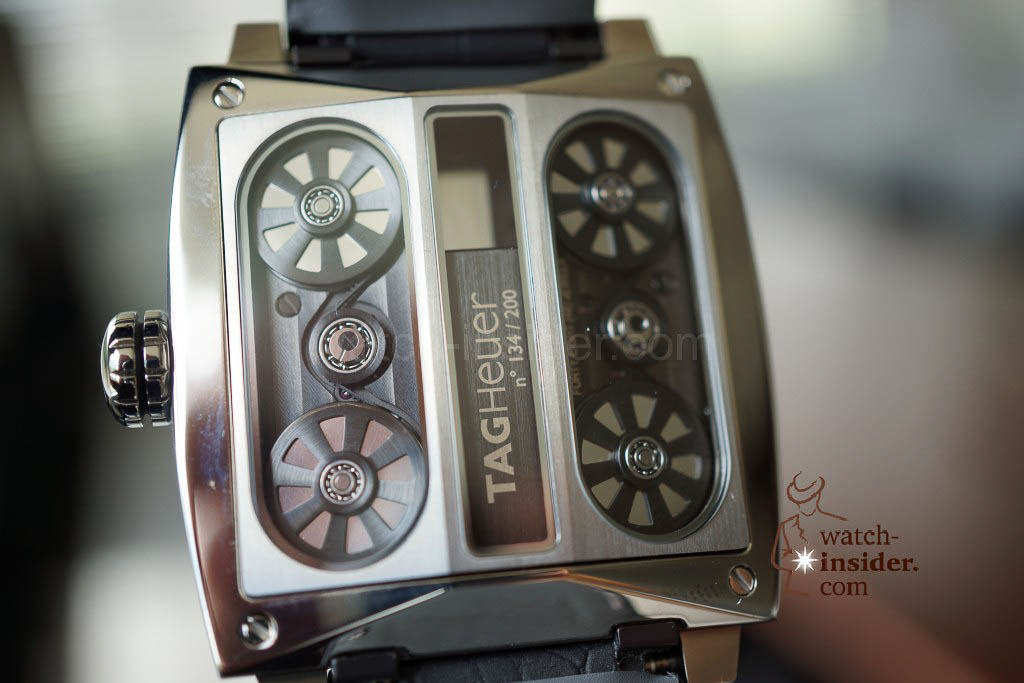 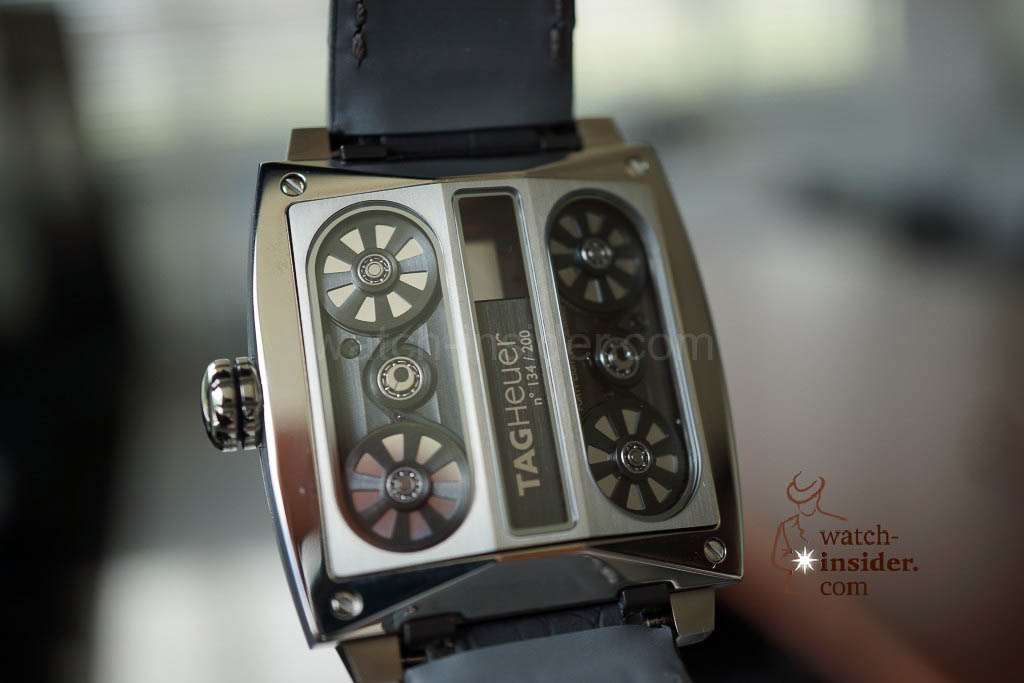 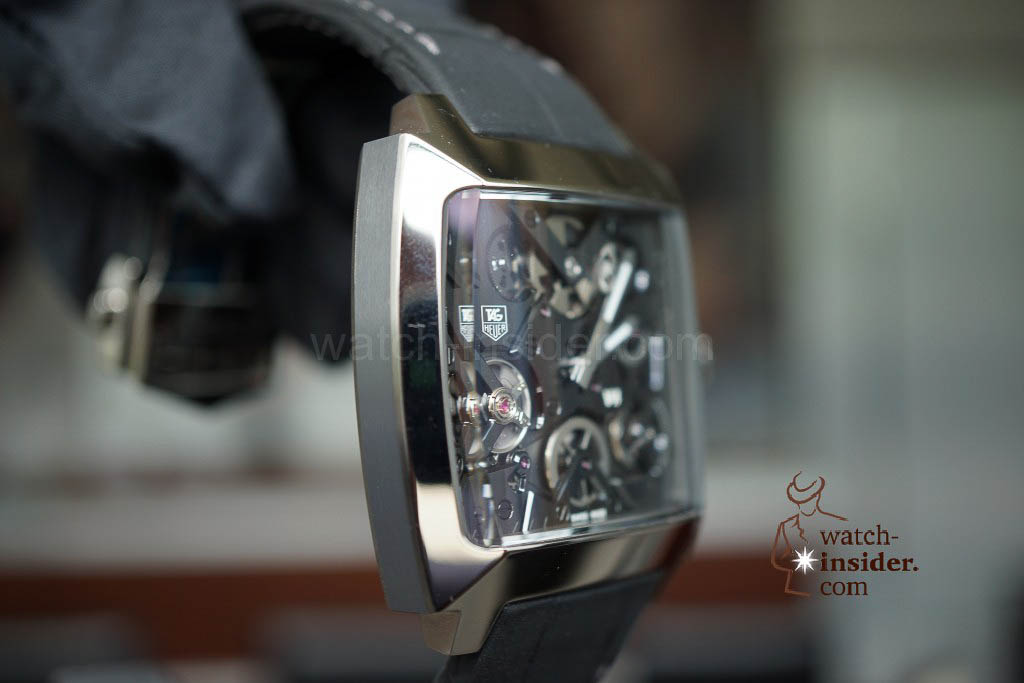 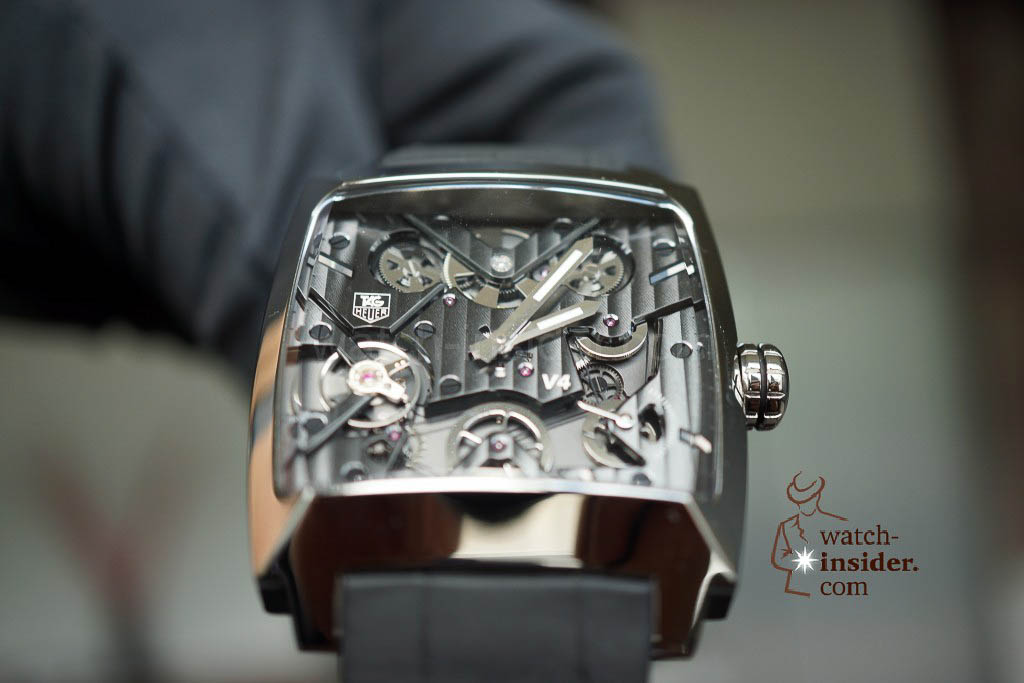 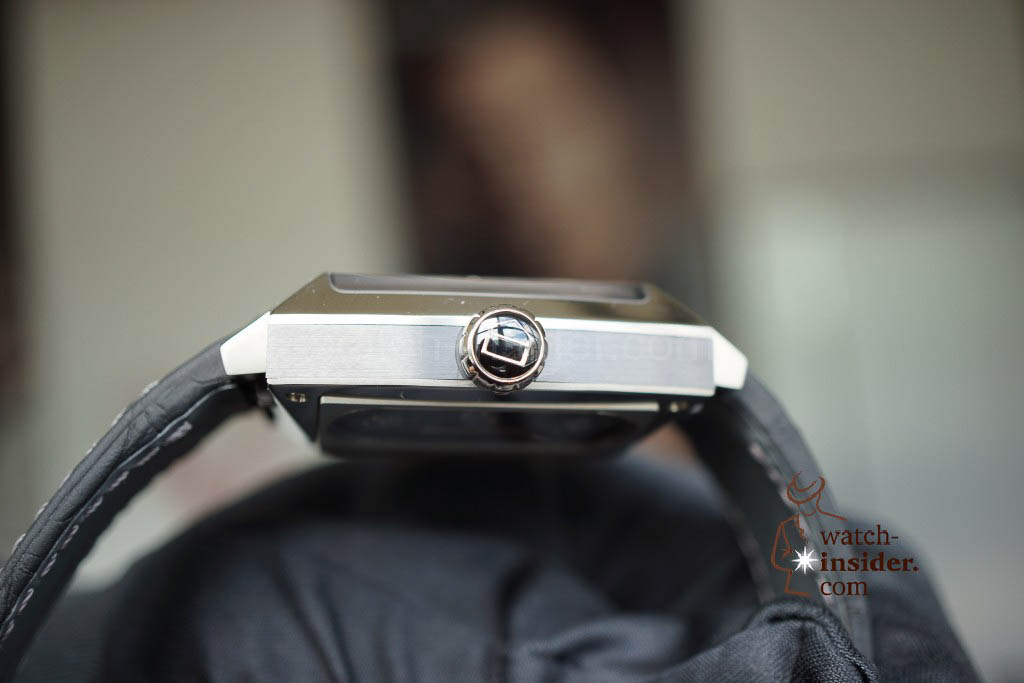 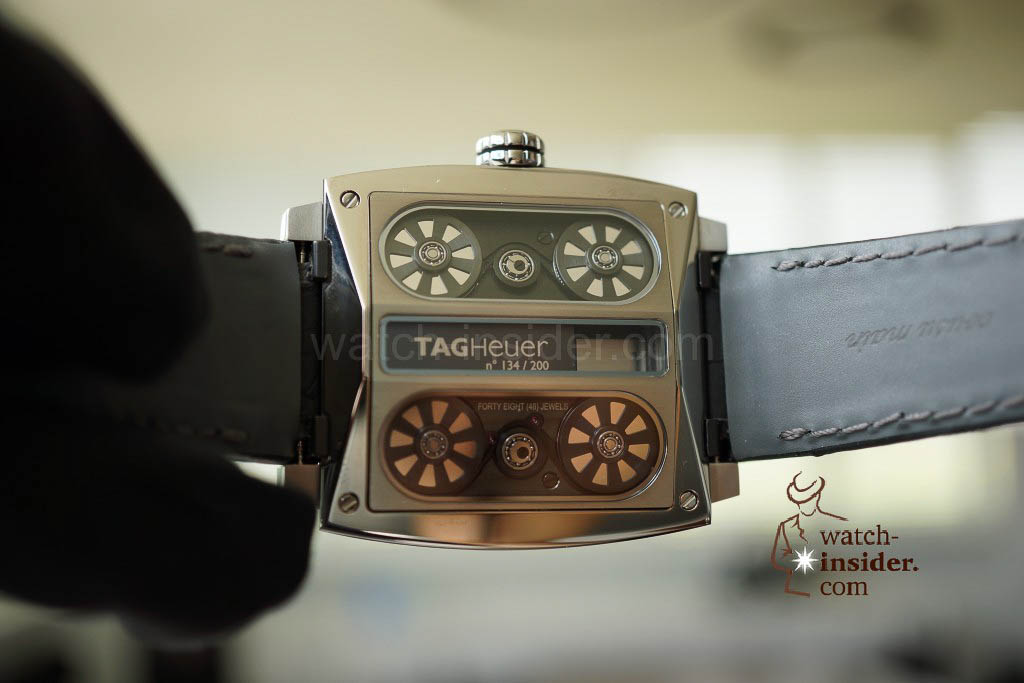 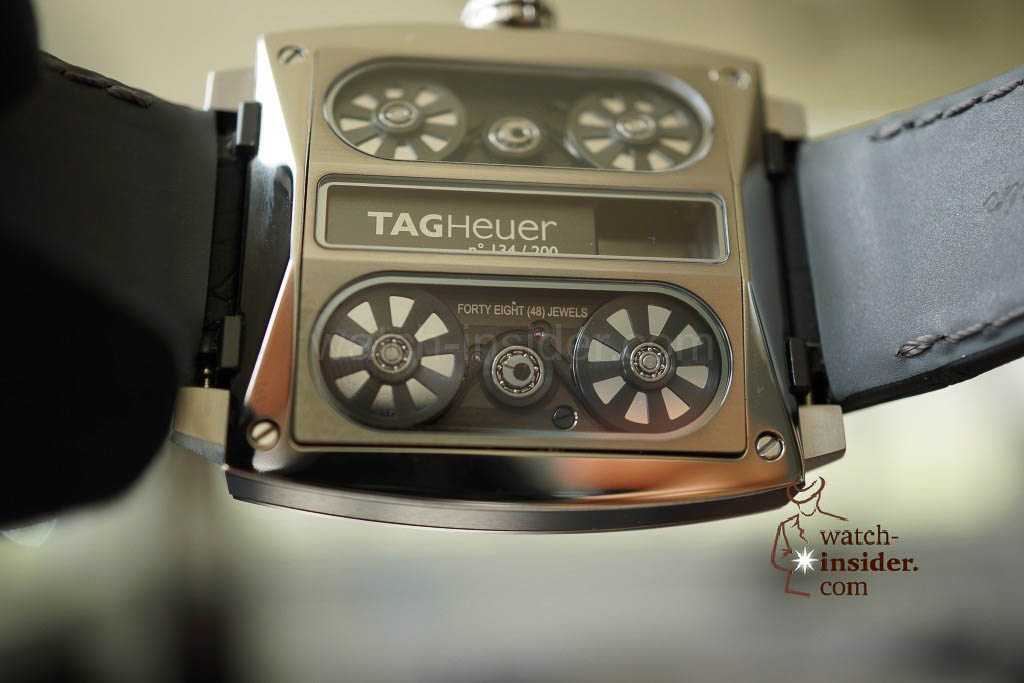 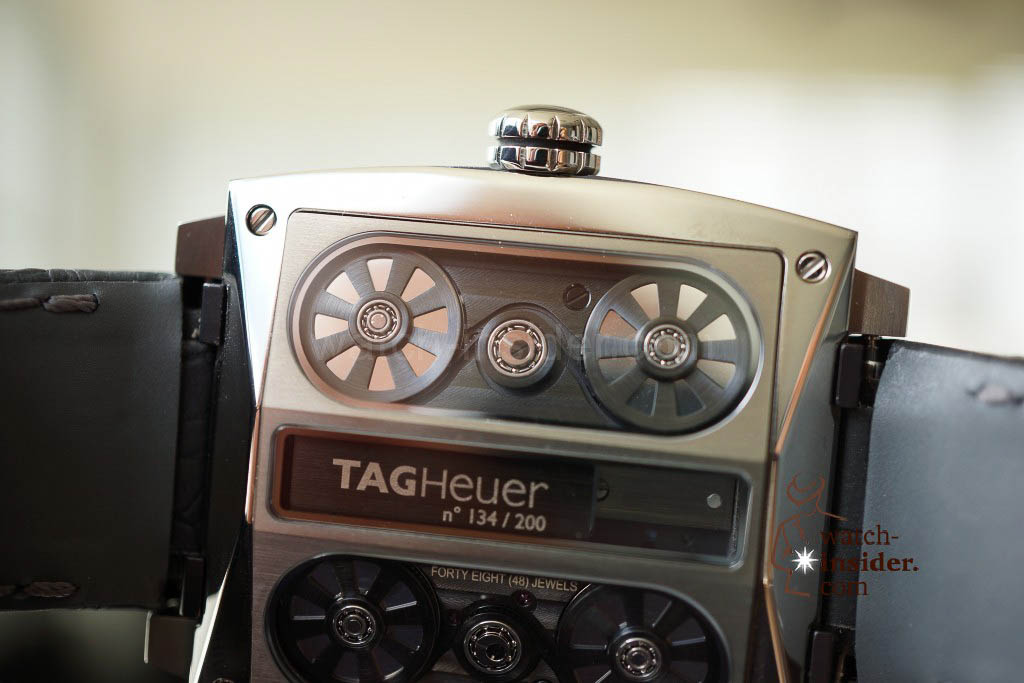 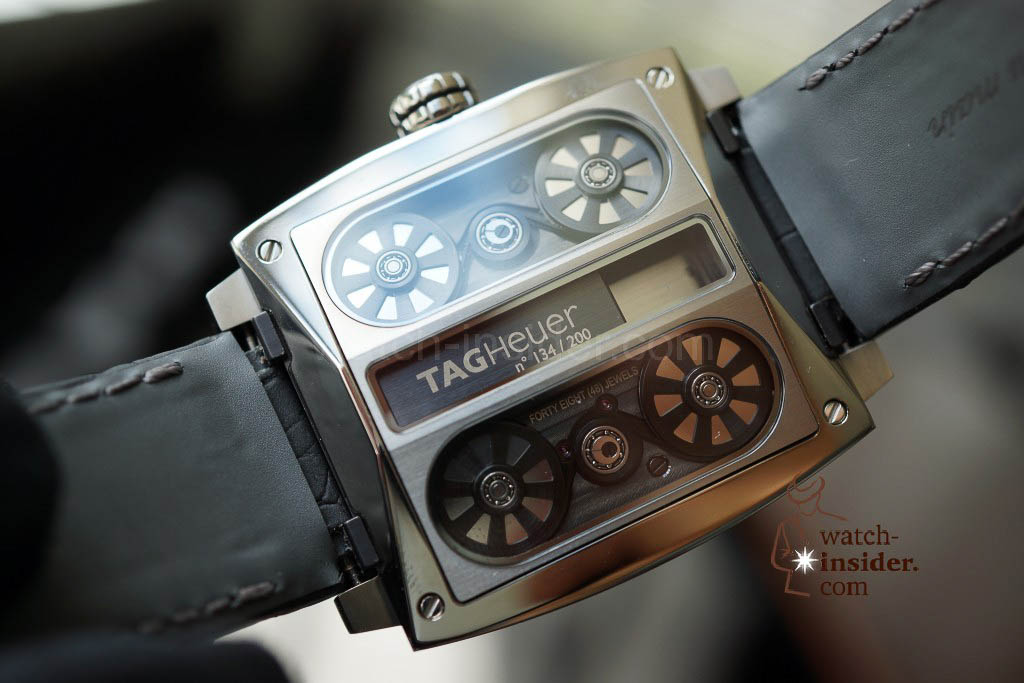 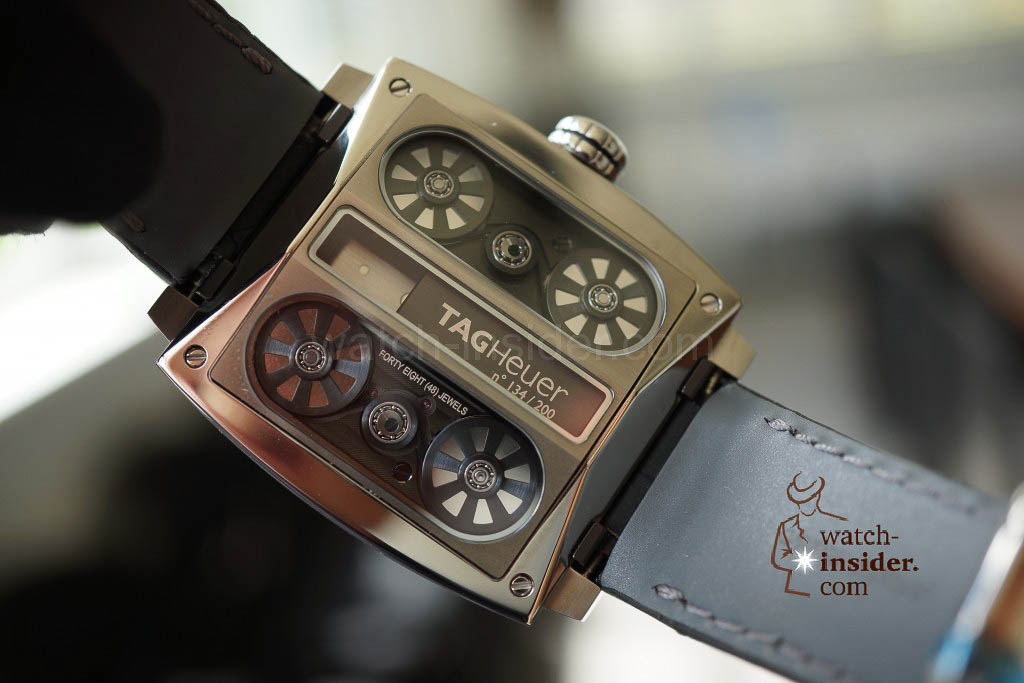 Written By
Alexander Linz
More from Alexander Linz
The new integrated mechanical chronograph movement is being produced at the just...
Read More

Love is in the air: meet the new #breguet Classiqu

The Arc Automatic from @mvmt with 41-mm case and #

The #chopard Alpine Eagle is based on the brand‘

Hands-on with the new 42-mm version of the #radoca

The insane #harrywinston with four #tourbillons in

If you‘re in LA this weekend, here‘s a suggest

Spending quality time with the new S300 White from

The Chicago based start-up Carapthia Watch Co. has