IWC Schaffhausen and the Saint-Exupéry Youth Foundation team up to fight illiteracy.

The Big Pilot’s Watch Perpetual Calendar Edition “Le Petit Prince” in its platinum case is a unique piece. It will be presented in Sotheby’s Geneva auction of Important Watches on 12 November 2013 (for more details click HERE) and the entirety of the proceeds from the sale will benefit the Antoine de Saint-Exupéry Youth Foundation. All funds raised will contribute to the construction of a school in Cambodia.

The back of the Big Pilot’s Watch Perpetual Calendar Edition “Le Petit Prince” (= Reference IW502801) shows the IWC-manufactured 51613 caliber with Pellaton automatic winding and a 7-day power reserve, as well as an 18-carat gold medallion engraved with an image of the little prince.

The Big Pilot’s Watch Perpetual Calendar Edition “Le Petit Prince” is also accompanied by a limited edition book with a facsimile of the French handwritten manuscript of “Le Petit Prince” and a reproduction of the first edition of “The Little Prince” from 1943 in English. 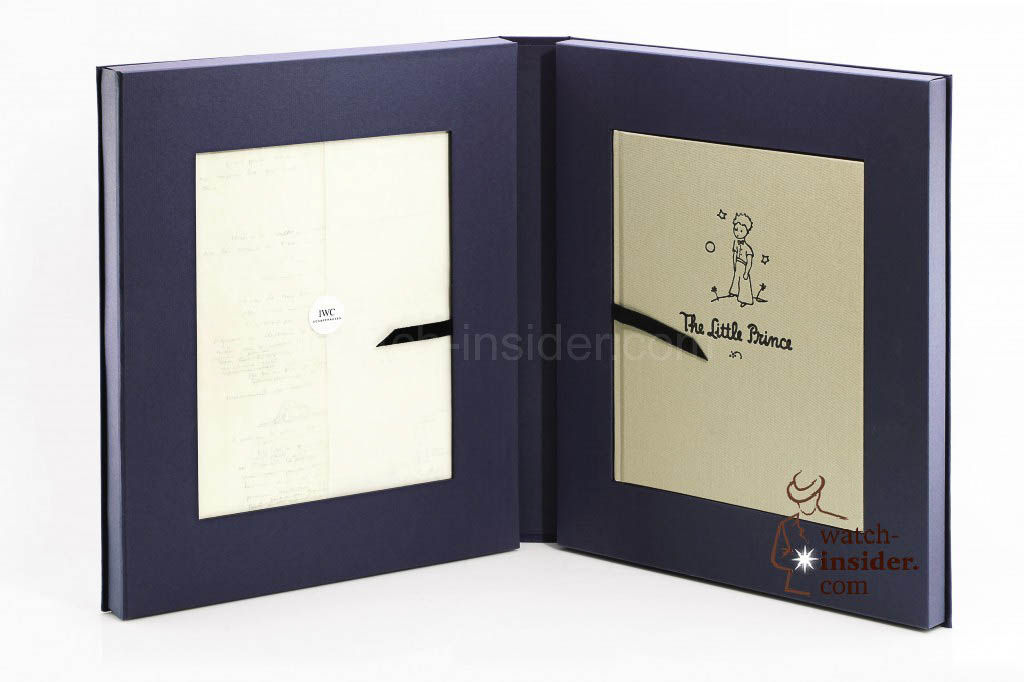 So that´s what I would call a real remarkable watch!

Now you know: Whenever in the future you will see a platinum edition of the Big Pilot’s Watch Perpetual Calendar Edition with a blue dial, this it is the unique IWC timepiece. Or should I better write IWC masterpiece?

“Saint-Ex” as a pilot in Argentina in 1930. He related his experiences as the man responsible for the first night flights in “Night Flight”, which helped him to achieve his breakthrough as a writer.

Antoine de Saint-Exupéry in 1935, shortly before his attempt to set a new long-distance record from Paris to Saigon. He had to crash-land in the Egyptian desert and was saved by a Bedouin after 5 days.

Books like “Night Flight” and “Southern Mail” have made the writer Saint-Exupéry (seen here in 1939) immortal. With over 80 million copies in print, his story “The Little Prince” is one of the best-selling books of all time.

Antoine de Saint-Exupéry, pictured here as an airmail pilot, joined his colleagues in taking enormous risks to ensure that postal dispatches arrived at their destinations safely and on time.

Antoine de Saint-Exupéry (pictured here in 1938 in a cockpit) went down in history as a writer, adventurer and pilot, for whom passion was of the essence. His life and work are inseparably connected with the history of aviation.

Written By
Alexander Linz
More from Alexander Linz
The Langematik Perpetual is now combined in a white-gold case and a...
Read More