Extending their Big Pilot collection, IWC announced the IWC Big Pilot Watch Annual Calendar Edition “Antoine de Saint Exupéry”. Quite a mouth full but what can you expect for an annual calendar at this size? With just over 46mm and the typical big crown this watch can’t be missed. Limited to 250 pieces in 18-carat red gold with a brown dial and gold-plated hands.

Named after the French author and aviator that defended the society out of respect for humankind, cultural diversity, cooperation, commitment and individual responsibility, the Antoine de Saint-Exupéry Youth Foundation carries out various projects around the world to improve the everyday lives of youth and to help them attain better futures. Created by the heirs of the author of “The Little Prince” and his admirers from the worlds of aeronautics and literature, in 2008.

Many children and young people do not have access to a proper education. Their chances of success on the job market are therefore low and they cannot properly integrate in society. The Antoine de Saint-Exupéry Youth Foundation is dedicated to helping them. The charitable organization was founded in 2008 by the descendants of Antoine de Saint-Exupéry to uphold his humanist legacy. IWC Schaffhausen has been a partner of the foundation since 2006 and regularly releases special edition Pilot’s Watches in honour of Saint-Exupéry. Part of the proceeds from the sale of these watches goes to support a number of different school and education projects. The watches feature a signature tobacco brown dial and a brown calfskin strap with cream-coloured quilted stitching. The unmistakable design is reminiscent of the flight suit worn by Saint-Exupéry during his reconnaissance missions. 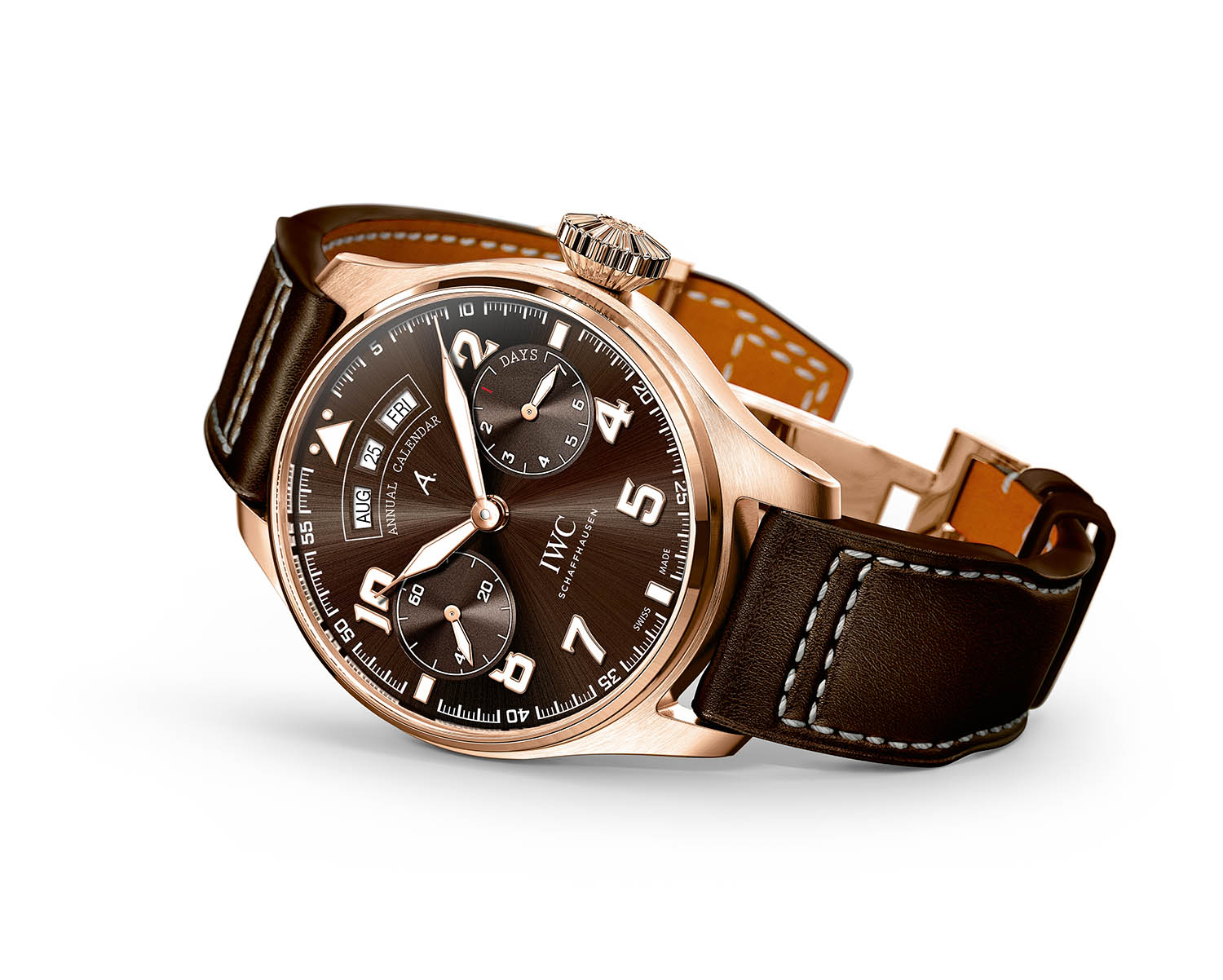 The tobacco brown dial and the brown calfskin strap with decorative white stitching are reminiscent of the pilot suits from the era of Antoine de Saint-Exupéry. The annual calendar displays the month, date and day in three separate windows and only requires adjustment once a year, at the end of February. The IWC-manufactured calibre 52850 boasts a Pellaton winding system with components in virtually wear-free ceramic and generates a 7-day power reserve in two barrels. A special feature of this watch is the rotor in solid 18-carat red gold in the form of a Lightning P-38: it was in this particular model of aircraft that Saint-Exupéry took off on a reconnaissance flight across the Mediterranean from which he never returned. This watch is just the latest in a series of timepieces created by IWC to highlight its long-standing partnership with the Antoine de Saint-Exupéry Foundation. Reference for this watch is IW502706.

The new models are available from November 2017 in IWC boutiques and from authorised IWC retailers.