Last year, when visiting the Jaquet Droz workshops in La Chaux-de-Fonds, I saw The Bird Repeater whilst being step by step manufactured. Today I can present you a spectacular watch …

This exceptional timepiece, conceived by the craftsmen of the House, blends the history, know-how and imaginative power of Jaquet Droz in a way as precious as it is original.

The founder of the company Pierre Jaquet-Droz, born in 1721, was taking on a veritable challenge: imitating life. His automata – the Musician, the Writer, the Draughtsman, and others, now exhibited at the Neuchâtel museum of art and history – would go on to astonish the many crowned heads of the time. But Nature is equally honored in this singular vision, where birds are particularly well represented. Like a scientist dissecting his subject of study to achieve perfect understanding of its secrets, Pierre Jaquet-Droz and his successors made a reputation with their series of long-case clocks. Very quickly abreast of the latest innovations in miniaturization, they soon began to create breathtaking singing watches. At first incorporated in real birdcages, these creations benefited from developments in miniature clock making, and were soon transformed into pocket watches and table clocks of proportions as small as they were refined. True stars of their period, the “birds” at the famous farm of Sur le Pont at La Chaux-de-Fonds are treasures, not only of mechanics, but also of the decorative arts of the period. Enamels reproducing the finest nuances of plumage; gold, pearls and precious stones – nothing was too good for these exceptional timepieces, which won Jaquet-Droz the international renown that persists to this day.

In a stunning visual show, The Bird Repeater represents two Blue Tits, symbolic of Pierre Jaquet-Droz’s native Jura region, together over the nest containing their fledglings. In another nod to the origins of the Manufacture, the Saut du Doubs waterfall also figures on the dial of this new horological treasure. Fully animated by a mechanism of unequalled complexity, this three-dimensional picture truly comes to life. While one of the birds bobs to give a beakful of food to its offspring, the wings of its companion spread to reveal their delicate shades of color. An egg in the middle of the nest opens to reveal a chick, while the water of the stream flows in a continuous cascade.

The Bird Repeater is an authentic automaton, with a cam system inherited directly from the century of Enlightenment, and it calls upon the resources of all the decorative crafts. Jaquet Droz engravers and painters have worked together to produce the yellow, blue, white and deep black of the birds’ plumage, the perfectly balanced volumes and the finely detailed wisps of grass forming the nest. To achieve the realism of this scene no less than eight different animation mechanisms act in synchronism: the movement of the birds’ heads and wings, the movement of the fledglings, the hatching of the egg, the sparkle of the flowing water.

Jaquet Droz has given The Bird Repeater one of haute horlogerie’s most virtuoso complications: Minute Repetition. Simply pressing the pushbutton makes the watch strike the hours, quarters and minutes and sets the wonderful animated sequences in motion. The resonance and mellow tone of its cathedral gong, generated by two turns around the mechanism, are equaled only by the complexity of the system of chimes incorporated in the gold case, 47 mm in diameter and only 18.4 mm thick.

The Bird Repeater, made up of 508 separate components, has a 48-hour power reserve, and is available in two versions, one in grey gold set with diamonds and the other in red gold, each one in a limited edition of just 8 pieces. The outcome of two years of development, this new, dazzling masterpiece is the latest illustration, and doubtless the most extreme example of the uniqueness of the Jaquet Droz spirit: giving life, like no other, to the poetry of Time.

Please discover The Bird Repeater with this video … 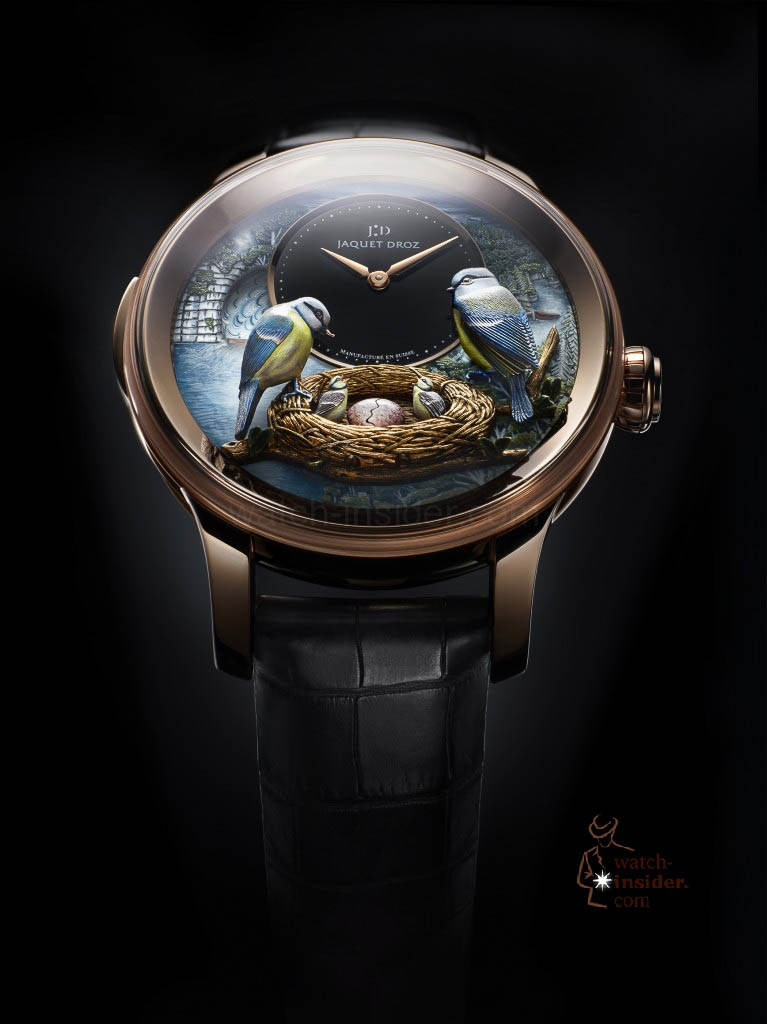 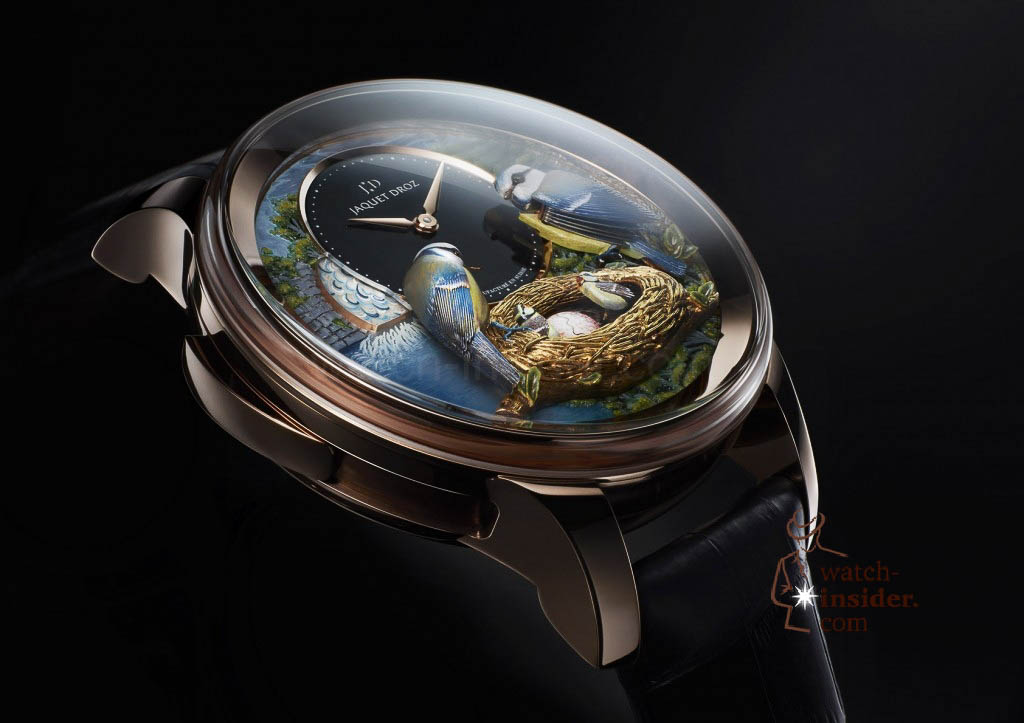 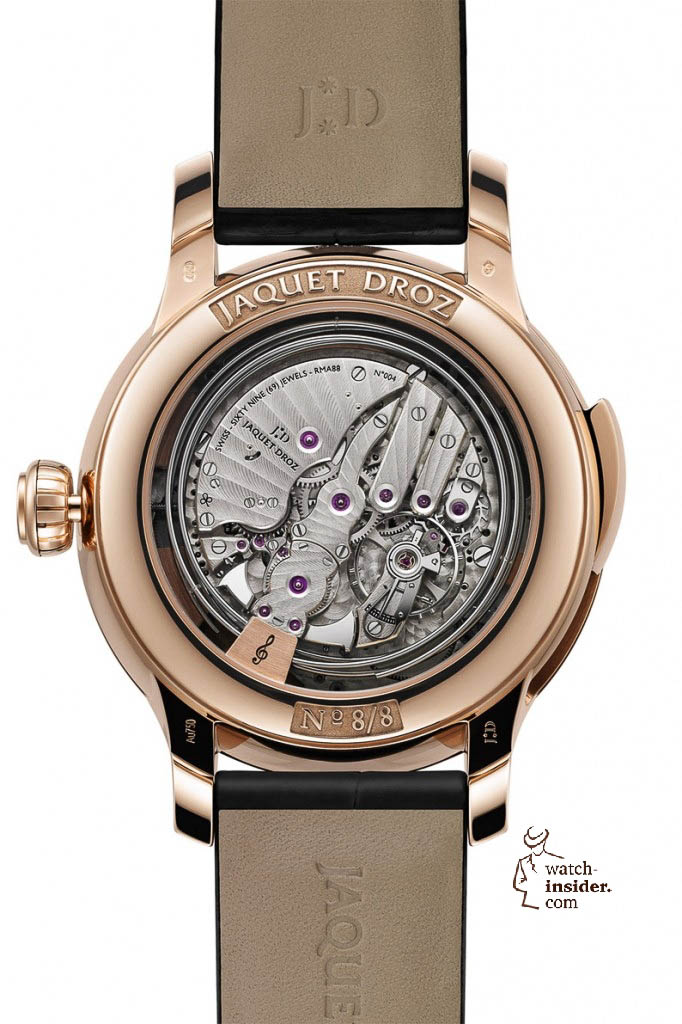 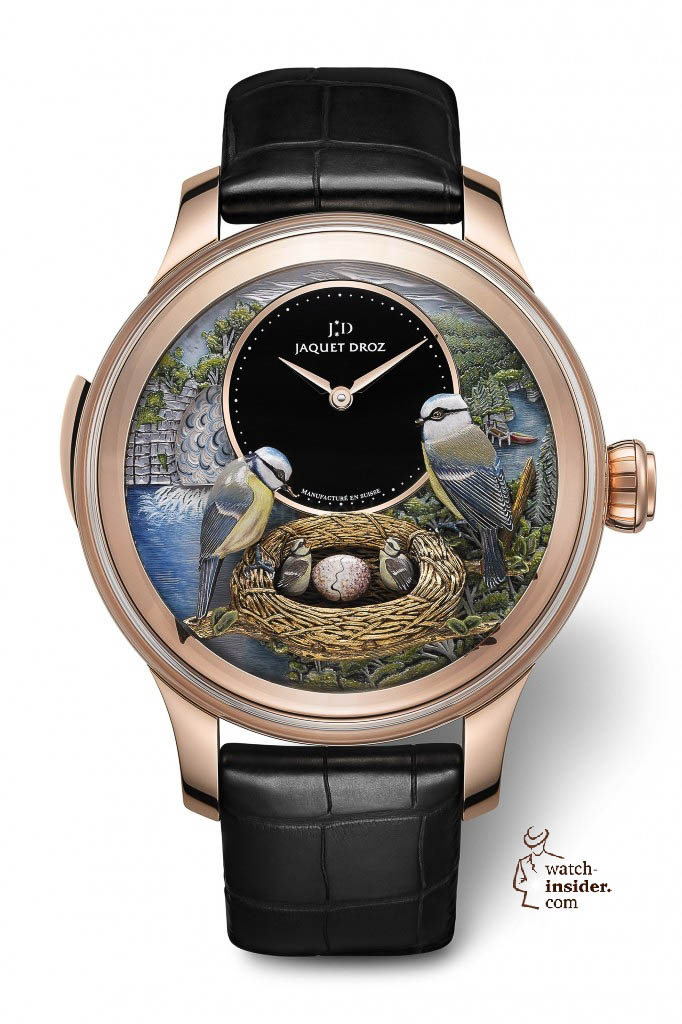 Some pictures showing details and the making of … 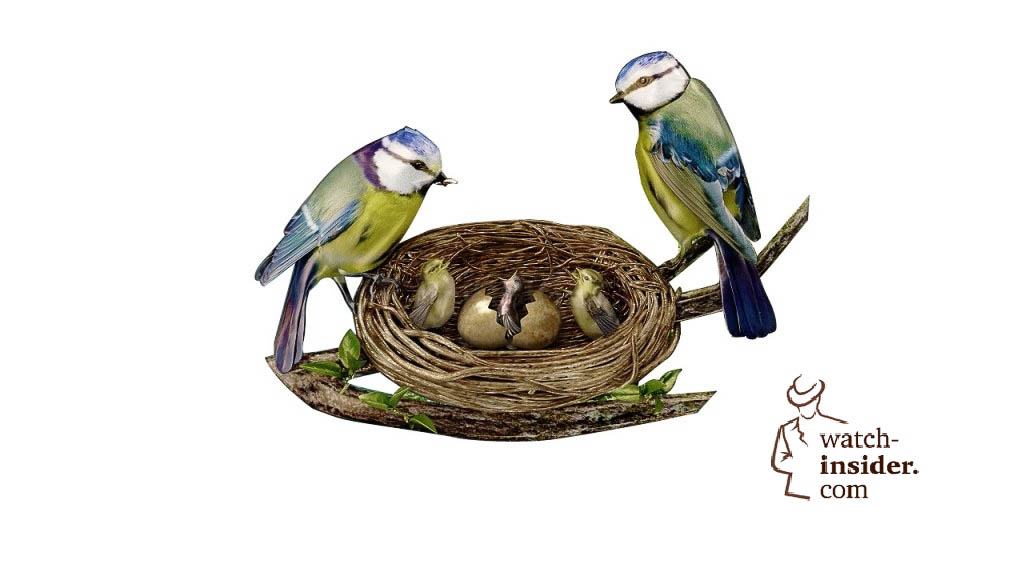 By pressing the pushbutton the watch strike the hours, quarters and minutes 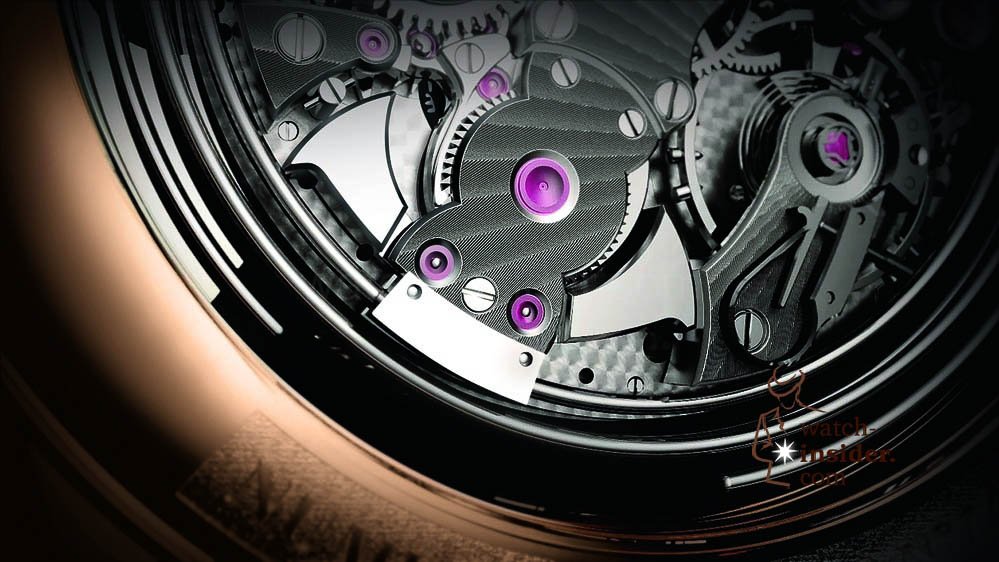 The engravers and painters have worked together to produce the yellow, blue, white and deep black of the birds’ plumage, the perfectly balanced volumes and the finely detailed wisps of grass forming the nest. 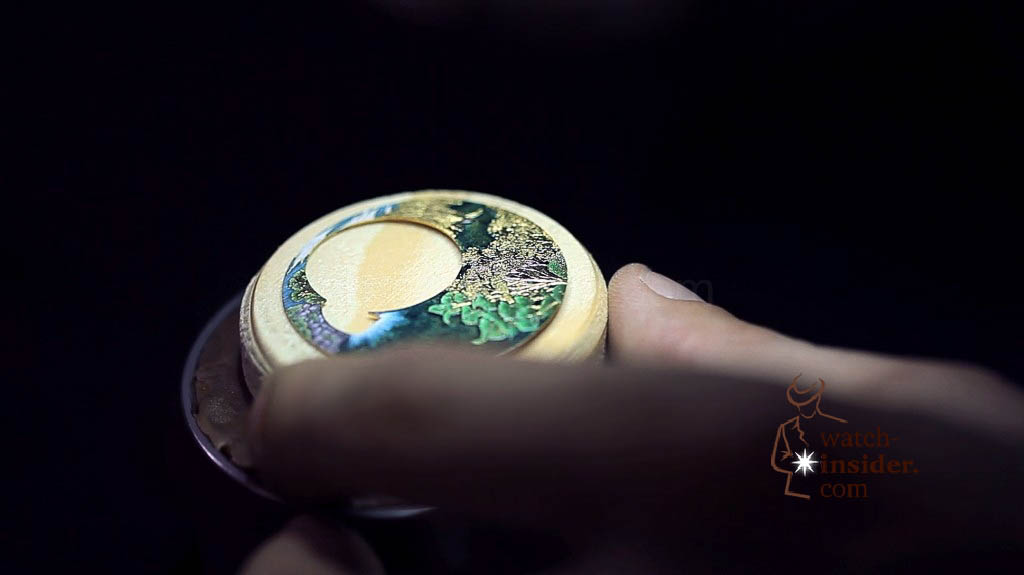 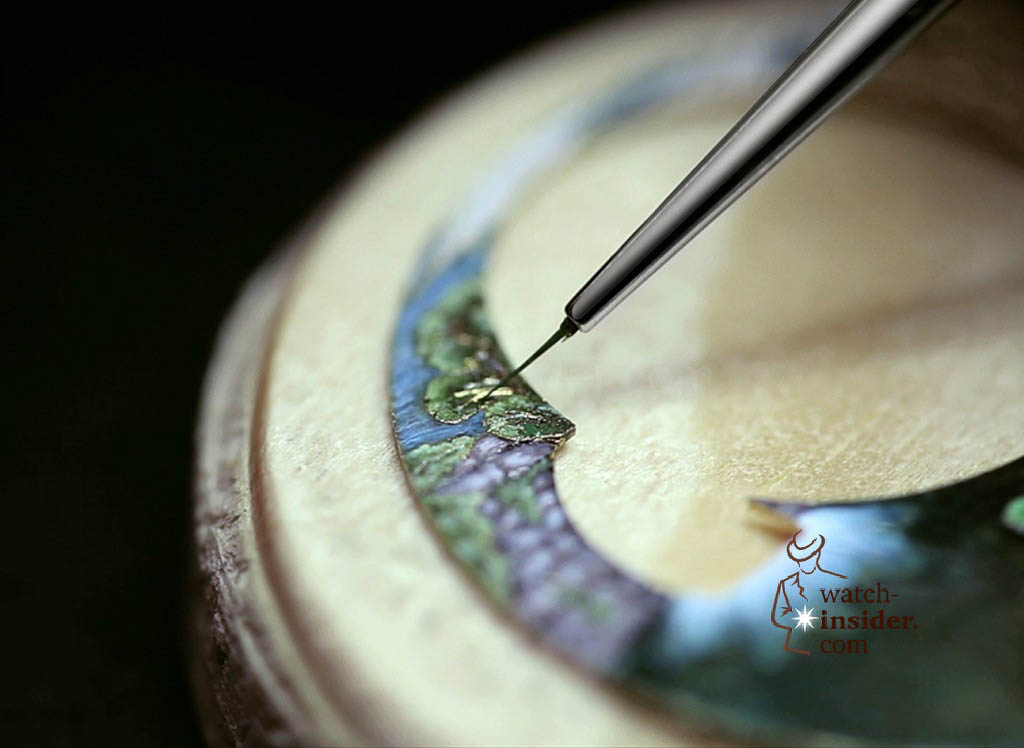 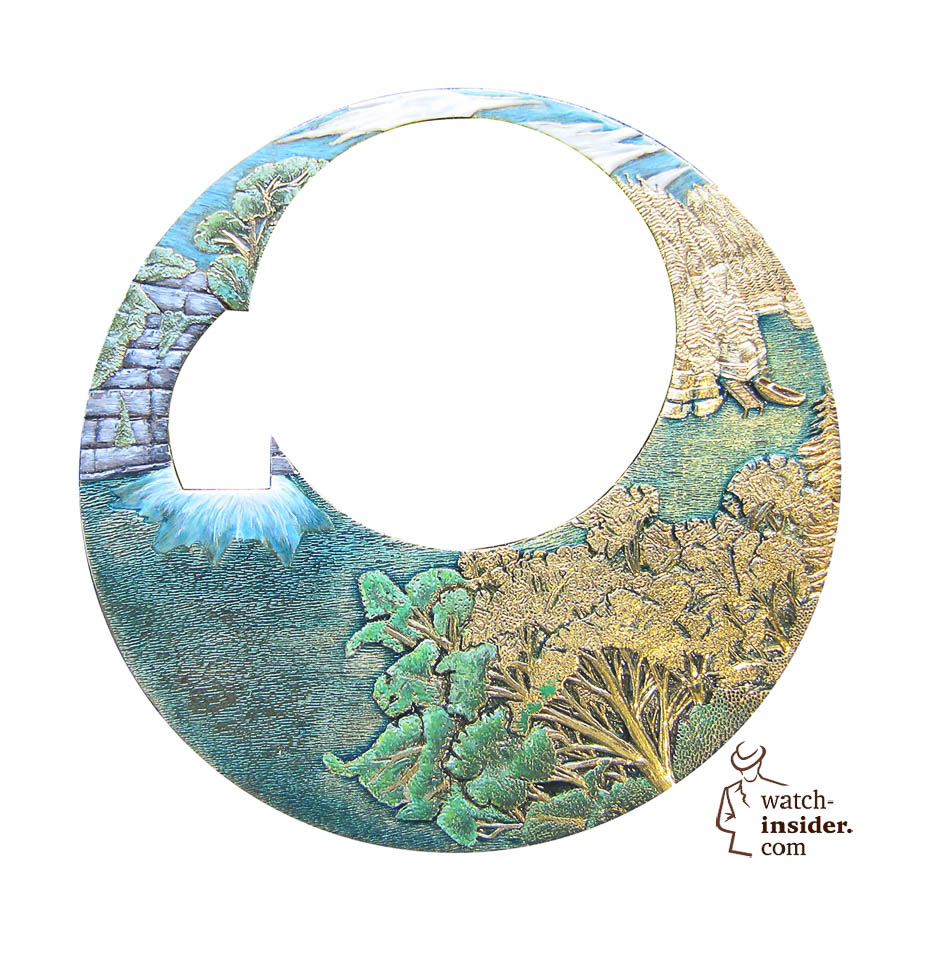 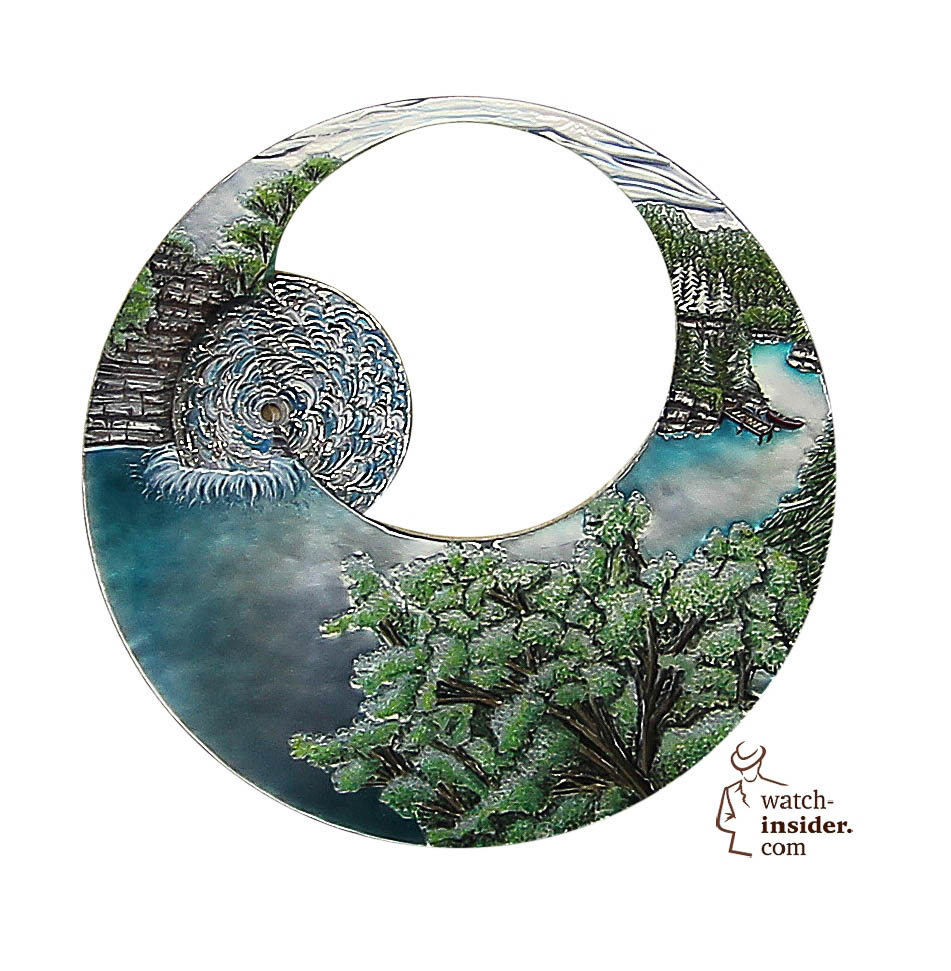 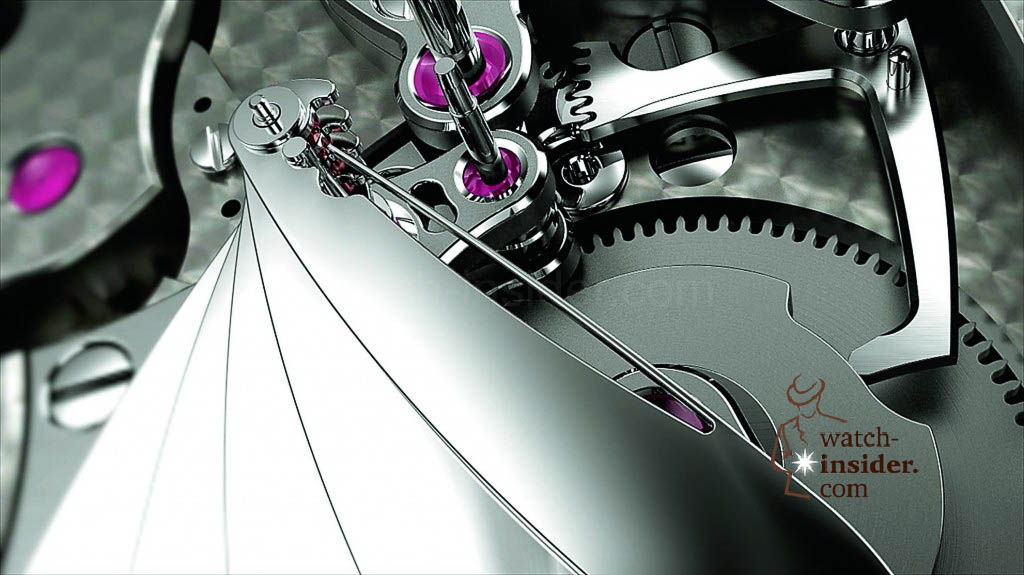 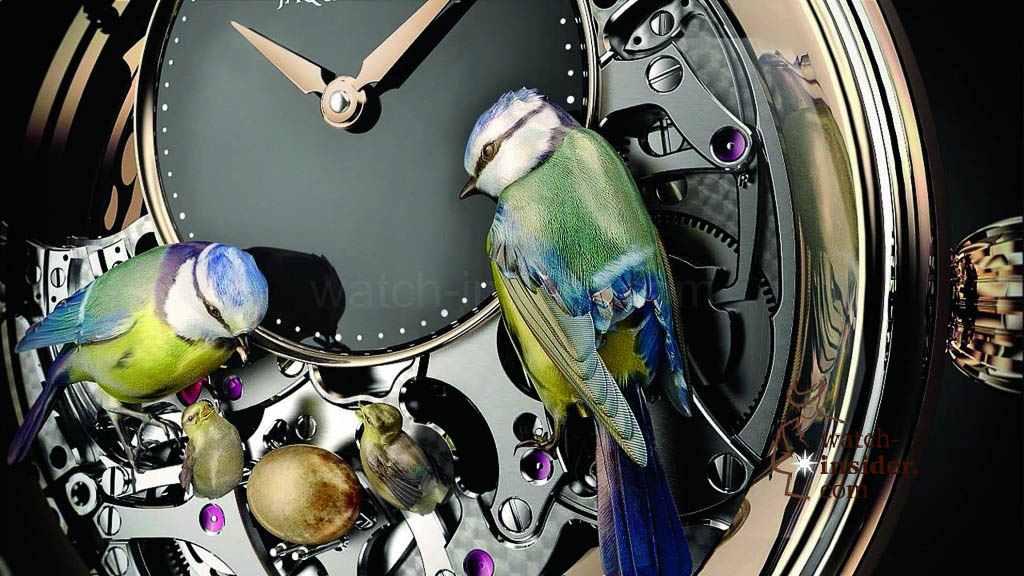