We are not yet used to see such complicated and prestigious timepieces from Hemès, but little by little we should. Step by step La Montre Hermès is growing in terms of volume and in terms of complexity of its movements.

If we recall the past of Hermès watchmaking activities we find remarkable timepieces dating back from the 1930s. Today it is the company-own subsidiary La Montre Hermès in Switzerland that produces the brands watches.La Montre Hermès is taking its business seriously; we are not talking about the production of gimmick-watches that are just made for carrying and multiplying the famous Hermes-H-logo.

La Montre Hermès bought a 25 percent share of the well-known movement producer Vaucher Manufacture located in Fleurier in the Swiss Jura, belonging to the Parmigiani Group to be able to get made-to-order hand wound, automatic and in the future also a chronograph caliber.

La Montre Hermès is also cooperating with independent watchmakers to realize special projects. The last remarkable example was the successful cooperation with Jean-Marc Widerrecht and his Geneva based company Agenhor to build the Hermès timepiece Le Temps Suspendu.

This gorgeous watch enables its owner to get timeless if he wishes. By pushing the button located at 9 o´clock the two hands of the watch go in a neutral position and stay there. The watch indicated no time and you are timeless. If you wish to rejoin the real life you just push the button again and the watch will immediately show you the correct actual time. For every watch aficionado this is a fantastic mechanical toy. The sales of Le Temps Suspendu have exceeded all expectations and the watch has won several international prices meanwhile.

The new Arceau Lift flying tourbillon watch is inspired by the historical premises of Hermès at 24, Rue du Faubourg Saint-Honoré in Paris. The double H topping the tourbillon carriage and the barrel bridge of the Arceau Lift reproduces one of the emblematic motifs featured in the interior design of the boutique. Testifying to the enthusiasm for wrought-iron work in the early 20th century, it appears in a number of details including the entrance, the handrails and the bannisters – and above all above the door of the Lift installed in 1923 and after which it is named.

More than just a pattern that would subsequently inspire other creations, Lift symbolizes the union between the Hermès and Hollande families in 1900 through the marriage of Emile Hermès, grandson of the House founder, and Julie Hollande (she is NOT related to the today`s President François Hollande :-)).

This motif has now been given a watchmaking reinterpretation by setting the stage for one of the most demanding complications: the flying tourbillon.

The tourbillon does indeed appear to be flying and its elegant rotations are accompanied by the double H, whereas the second Lift motif above the barrel bridge in the upper part of the watch remains fixed in its appointed place.

Arceau Lift represents an authentic technical feat driven by Calibre H1923, thus named in reference to the date when the elevator was installed in the boutique.

Certain parts of the multi-layered movement form a dial with a raised chevron motif, alternating between purely decorative and more specifically horological finishes.

Vividly displaying the excellence of this exceptional mechanism, the components of Calibre H1923 (produced in cooperation with La Joux-Perret SA in La Chaux-de-Fonds) are indeed finished with the special care demanded by watchmaking traditions.

The bevelling on the bridges, wheels and screws is entirely done by hand, while the 12 o’clock jewel surround, as well as the double H topping the tourbillon carriage, feature the mirror-polishing technique also known as specular polishing.

This complication may be admired from the dial side and is also revealed through an opening carved out in the back of the gold case, bearing the Hermès ex-libris.

Arceau Lift is fitted with an alligator strap crafted in the workshops of La Montre Hermès, and each of these 176 timeless limited-edition watches is engraved with a unique individual number.

And these are the pictures I took from the new Arceau Lift yesterday in Paris…. 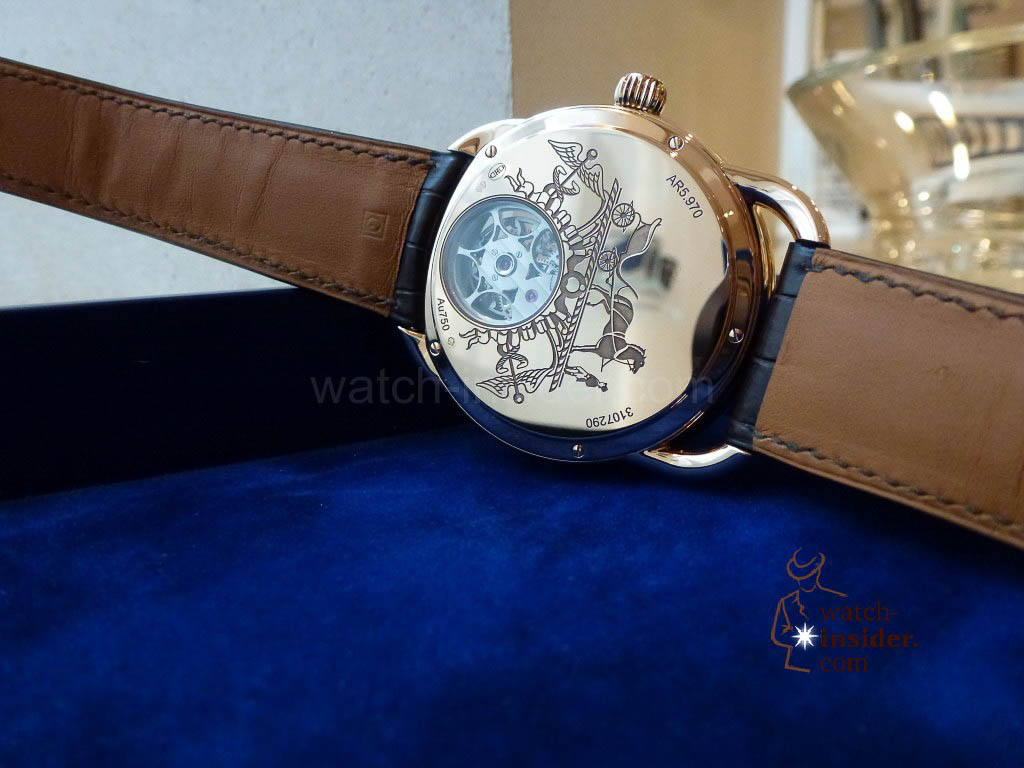 If you are in Paris go and see it!

Written By
Alexander Linz
More from Alexander Linz
Guys please check out these new Tudor watches and be surprised as...
Read More