One of the talking pieces of the SIHH for sure was the A. Lange & Söhne Triple Split. Impressive both visually as in technical views. Being the first ever mechanical split-seconds chronograph in the world that allows multi-hour comparative time measurements. With additional rattrapante hands on the minute and hour totalisers make it possible to stop lap and reference times of events that last as long as twelve hours. 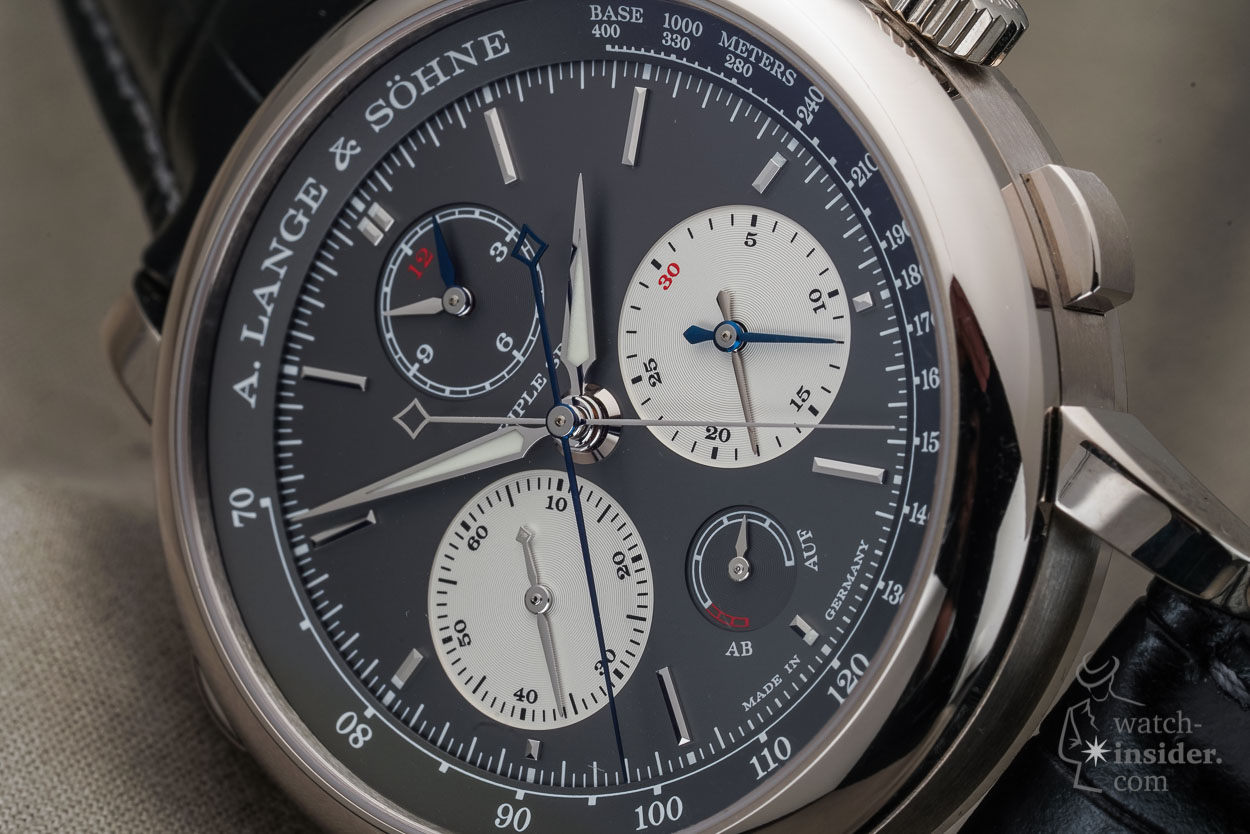 On 17 July 2016, German triathlete Jan Frodeno achieved a new world record for the triathlon long distance. In an amazing seven hours, 35 minutes and 39 seconds. He mastered the combination of swimming 3.8 kilometres, cycling 180 kilometres and running 42.2 kilometres. It took 20 minutes and 44 seconds longer for the runner-up, Joe Skipper of Britain, to reach the finish line. Among all mechanical rattrapante chronographs, only one would have been able to precisely record the times of the winner and the second-placed competitor in hours, minutes and seconds: the new TRIPLE SPLIT by A. Lange & Söhne. 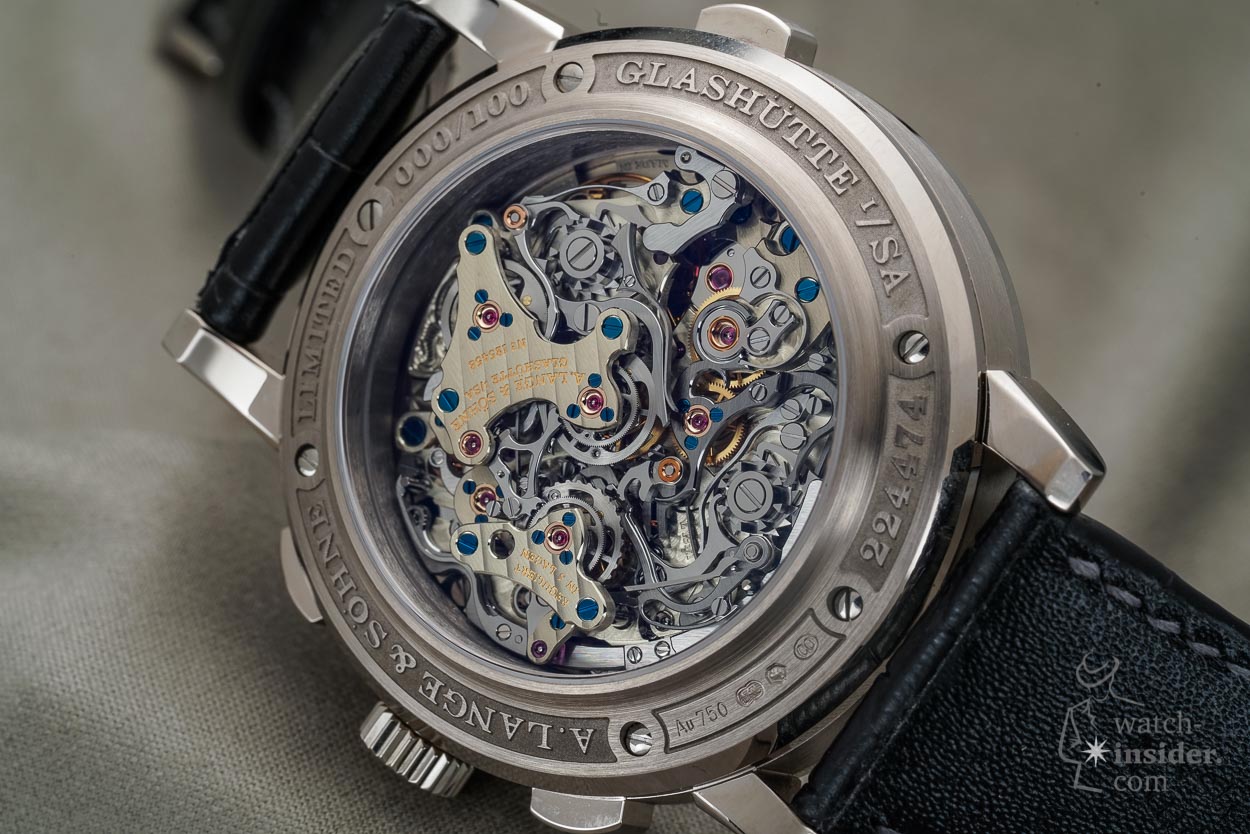 The only split-seconds chronograph in the world that can measure additive and comparative times for as long as twelve hours is in a league of its own. At the same time, it has broken the house record of the DOUBLE SPLIT, which in 2004 allowed the first comparative measurements with an aggregate duration of 30 minutes and since then has defended its unique position.

With a precisely jumping rattrapante minute counter and a continuous rattrapante hour counter, the TRIPLE SPLIT multiplies the measuring range of the rattrapante function by a factor of 24. This covers many more diversified and interesting applications: for in- stance, the TRIPLE SPLIT can compare the times of two opponents in a Formula 1 race, a Tour de France leg or a marathon. It can also record the times of consecutively starting events, such as the outbound and return legs of a long-haul flight. Also, it is possible to add the times of multi-hour events, such as the duration of individual Ironman disciplines. Any number of lap times can be stopped during an additive time measurement. 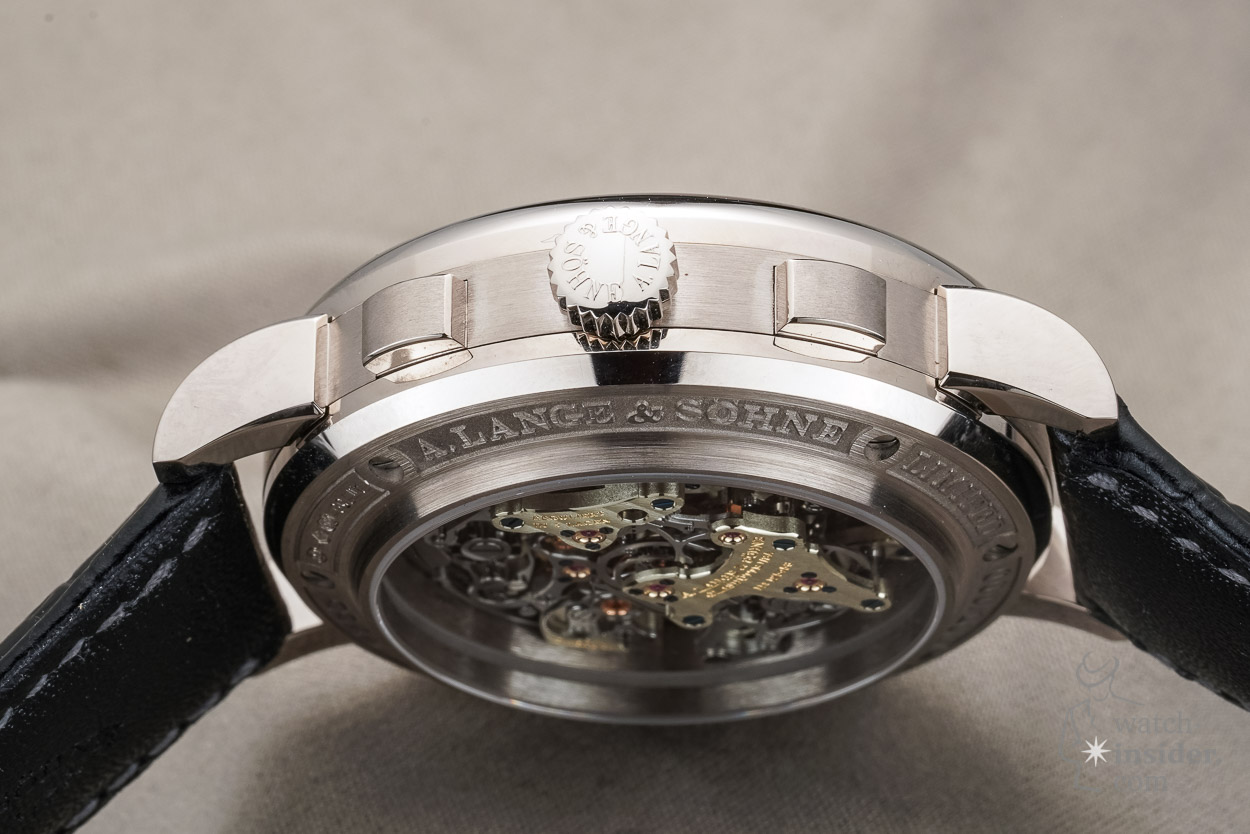 In the passive mode, the respective hand pairs – sweep seconds, minute- and hour-counter hands – are superposed. As soon as the measurement is started, they all begin to run sim- ultaneously until the rattrapante pusher is pressed to freeze intermediate times. The three blued-steel hands stop to display lap times while the seconds hand as well as the minute- and hour-counter hands continue to run and measure the total time. A second actuation of the rattrapante pusher causes the three stopped hands to catch up and synchronise with the running hands that continue to measure the duration of the event.

The TRIPLE SPLIT – which comes in a limited edition of 100 pieces – is endowed with a flyback function that involves all three hand pairs as well. Hence the chronograph can be reset and instantly restarted by pressing the lower chronograph pusher even during an ongoing measurement. A power-reserve indicator based on Lange’s typical UP/DOWN display shows how much of the 55-hour reserve remains available. The well-organized grey dial in solid silver is colour-coordinated. Matching with the 18-carat white-gold case which has a diameter is 43.2 millimetres. The three rattrapante hands in blued steel clearly set themselves apart from the rhodiumed chronograph hands. The hands which display the time and the applied baton hour markers are made out of rhodiumed gold. The hour and minute hands are luminous. 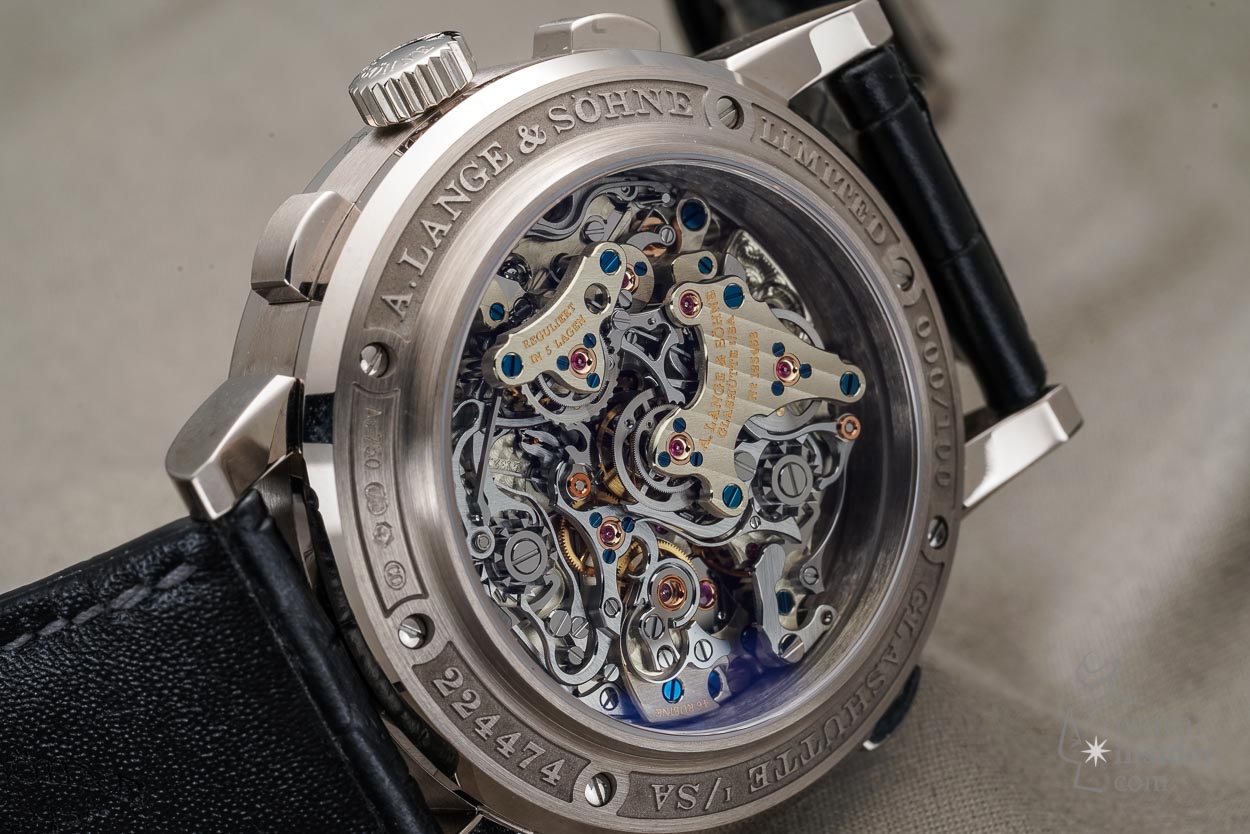 The design of the movement assures that neither the measurement of lap times nor the progression of the precisely jumping minute counter has a negative effect on rate stability. The normally unavoidable loss of amplitude is prevented by a disengagement mechanism developed and patented by A. Lange & Söhne. Without this device, friction losses occur when the rattrapante function is activated. Because it rotates slowly and continuously, the hour counter does not need such a mechanism. 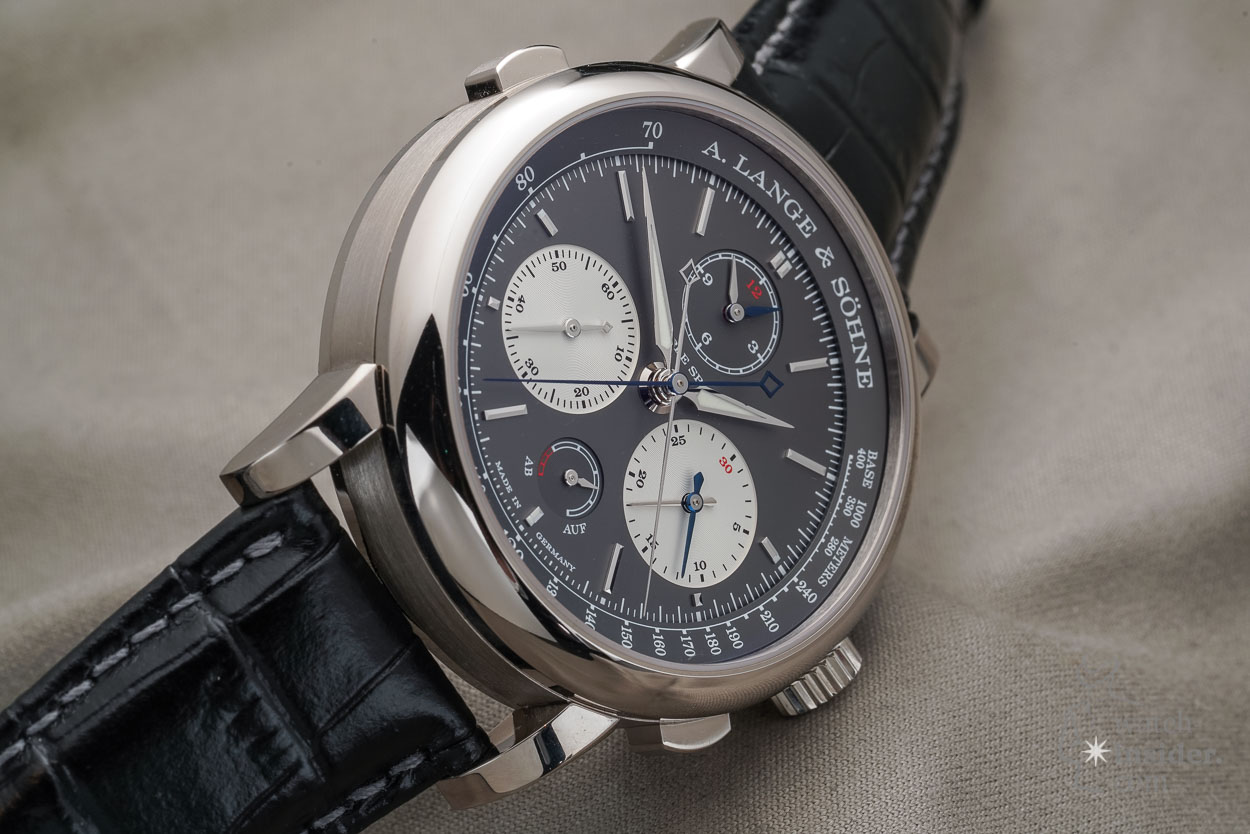 The manufacture calibre L132.1 is a newly developed movement which significantly distinguishes itself from the calibre L001.1 of the DOUBLE SPLIT. The power-reserve indicator has been shifted down to provide more display space for the rattrapante hour counter in the upper part of the dial. Despite the extended functionality, the engineers succeeded in integrating the additional components in the movement. Doing this is such an ingeniously way results in an un-enlarged case compared with the DOUBLE SPLIT. A glance through the sapphire-crystal caseback reveals the chronograph movement which is finished to the highest Lange standards. Also painstakingly choreographed which illustrates the stunning complexity of the project.

Written By
Bert Buijsrogge
More from Bert Buijsrogge
With the relaunch of the Geophysic True Second, Jaeger-LeCoultre already got a lot of...
Read More

Love is in the air: meet the new #breguet Classiqu

The Arc Automatic from @mvmt with 41-mm case and #

The #chopard Alpine Eagle is based on the brand‘

Hands-on with the new 42-mm version of the #radoca

The insane #harrywinston with four #tourbillons in

If you‘re in LA this weekend, here‘s a suggest

Spending quality time with the new S300 White from

The Chicago based start-up Carapthia Watch Co. has

Load More...
This error message is only visible to WordPress admins