Logan, thank you once again for this report. What a pity I did not make it to Hong Kong it looks like I missed something…

Alexander has introduced this show already. Basically, the contents of this show are similar to SIHH in Geneva, but the conception is totally different.

Everyone who wants to enter the show needs an invitation of course. The interesting part is that not only watch related media got admission, but mainly VIPs of brands and VIPs of luxury hotels, airlines and buyers of automobile brands.

Richemont Group invited potential buyers into Watches & Wonders and taught them what is Haute Horlogerie, what is real fine watchmaking, what is the value of watches of its brands.

People could easily get an idea that how difficult it is to make a watch and how much they need to pay for it by listening and observing things in this interesting show.

Another fundamental difference between SIHH and Watches & Wonders is that people can only see watches at the SIHH but watches were sold here in Hong Kong.

The show was held in a main hall in HKCEC. The decoration had a feeling of minimalism. Just everything was in an ivory color. 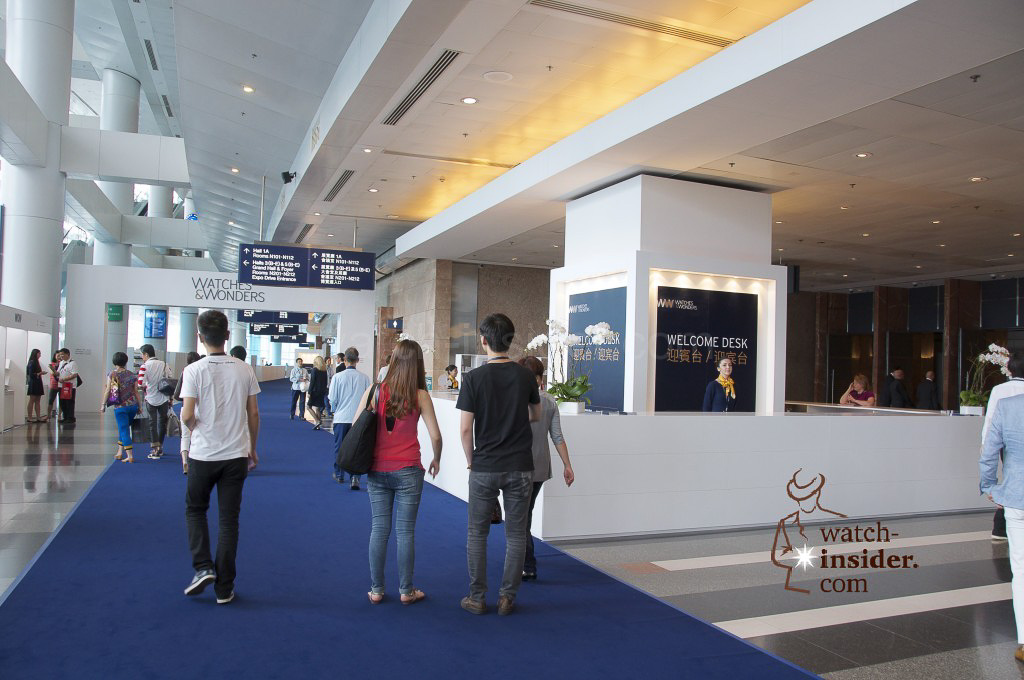 You really could find the display of concept of this show everywhere. They set a separated region for showing the charming processes of making watches.

A watchmaker was decorating the plate of movement.

One was allowed to observe watchmakers’ working from a short distant. You can really see how they add value into a machine.

Not only would they show you how they do things, but also introduce the aesthetic meaning of doing this and how to understand the sprit of watchmaking. I really think that they successfully planted seeds in many people’s hearts and attracted plenty of potential buyers.

Some contrasts would show people the importance of watchmakers’ work.

One watchmaker was assembling a movement. The difference between a normal show and this live version is that they did not just assemble things but also describe the basic principle of the movement.

If you listen to this lady, you would know what builds enamel its beauty.

There were some watch related books available here to bring you into the kingdom of horology further.

There was a little exhibition inside Watches & Wonders held by www.hautehorlogerie.org showing the history of watchmaking. I do think that history always can make people fall in love with something. In addition, the history of human’s mastery of time itself showed a sort of fascination.

They also held a watch class for people to learn how to assemble a movement; interesting and instructive.

Most of them revealed some new versions of old series and some of them just simply showed their products line.

You could see staff introduce things to people everywhere in Watches & Wonders. The main job of staff was to let people understand the beauty and the prices of watches.

A watchmaker was explaining how the dials of the Audemars Piguet Royal Oak are made.

Big logo on the ceiling

Showing the parts of the “new” Baume & Mercier tourbillon movement (delivered from sister brand IWC) can help people understand how tiny things could be and how difficult to assemble it and that’s the reason for the price.

Again, Cartier not only showed the watches, but also showed the art of making watches.

Cartier also brought the ID Two and some vintage watches.

This is a little but impressive show of Montblanc telling the story of its watches’ functions. Again, it was aiming to express the value of watches to those potential buyers by using an acceptable way.

It launched two new watches PAM502 and PAM503 in red gold and white gold respectively, incorporate caliber 2004. They put the watches inside some glass cylinders. Sorry for the degraded pictures…

A decoration of watch movement

The gallery showed the aesthetics of watches as well

Roger Dubuis Excaliber Quatuor got a black version only limited in 3 pieces. Unfortunately, I just photographed the “ordinary” one because the black titanium one was not available for photographing after they were all sold.

Their machine, their vintage pocket watches, their model of the new minute repeater movement, their enamel dials…

Last but not the least, Van Cleef & Arpels

I left after lunch.

Logan cool, I appreciate your work!

Written By
Alexander Linz
More from Alexander Linz
In 2014, Switzerland and the aviation world are celebrating a double milestone:...
Read More

4 replies on “Logan, my Chinese contributor sends us this interesting report from Watches & Wonders in Hong Kong”