This Longines chronograph is precise to one hundredth of a second and dedicated to alpine skiing to mark the 2014/2015 season. As you might already know Longines is the Official Timekeeper of the FIS Alpine Ski World Cup.

Since its debut in the alpine ski trials of 1933 at Chamonix, Longines has been faced with a number of challenges and has always succeeded in overcoming them to be able to comply with the highest standards of timekeeping for skiers’ performances. Each new innovation has allowed alpine skiers to enjoy a level of precision never witnessed before.

“Please do not forget, that Longines shares over 80 years of emotion and adventure with alpine skiing competitions. You only have to mention Kitzbühel in 1978, where the Austrian skier Josef Walcher and Sepp Ferstl from Germany tied exactly to one hundredth of a second upon crossing the finish line of the famous Streif. It was a feat measured by Longines! We are very proud to have contributed towards developing the technology used in this discipline. It all started with the Chronoson Longines in 1948, before moving onto the first quartz chronograph in 1956 and now we are paying tribute to this rich heritage with our Conquest 1/100th Alpine Skiing chronograph!”

“The Longines Conquest 1/100th Alpine Skiing chronograph is specially designed alpine ski enthusiasts (but not only for them of course!) who are looking for a watch capable of measuring intermediate times from the starting gate to the finish line, gate by gate, to the hundredth of a second. For skiers plummeting down a difficult course at high speed, time is the real challenge, the variable that needs to be controlled in order to join the legends and leave a mark in the history books of the sport.” 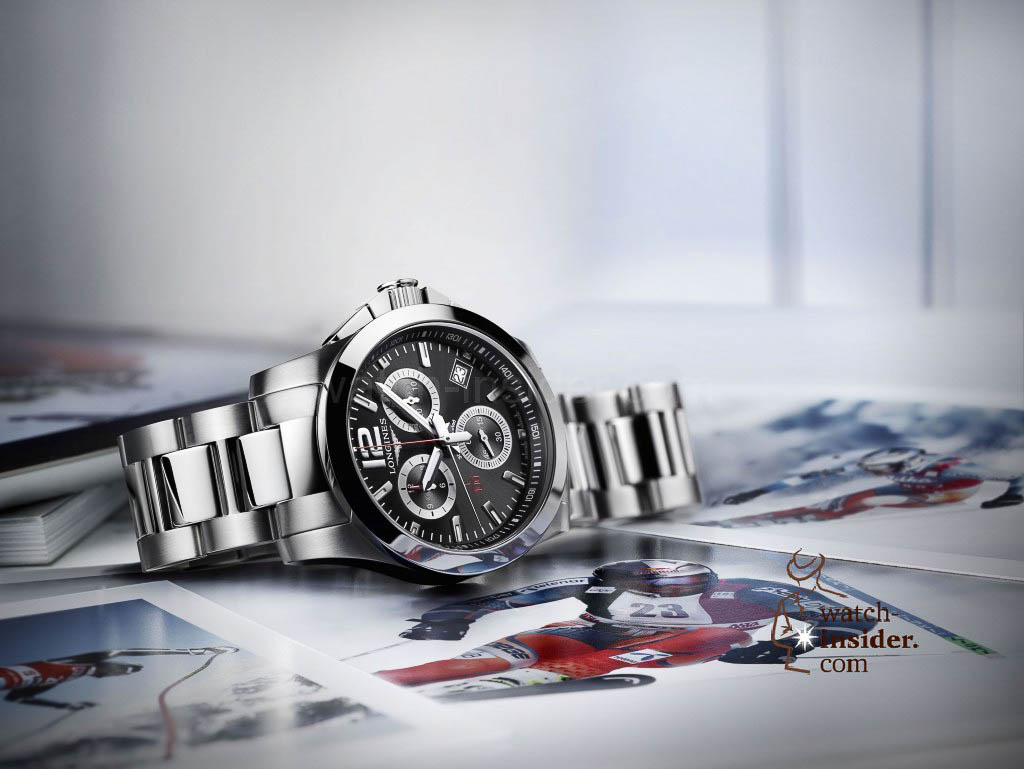 The L440 quartz movement, developed and produced by ETA, includes a microcontroller with a flash memory that allows the watch to be reset instantly and split times to be recorded. With a diameter of 41mm the watch has a black dial that displays the hour, minutes, small seconds at 6 o’clock, the date and chronographic functions: a central seconds hand, a 30 minutes counter at 2 o’clock and a 12 hours counter at 10 o’clock, the hand in red displays time to one hundredth of a second. The model is also fitted with a steel strap and a triple safety-folding clasp.