We all know the out of this world designs by MB&F for their watches and horological machines. Pretty cool and a pleasure to the eye combined with timekeeping functionality. Continuing in their aquatic adventures they present a new desktop or table clock called the Octopod. 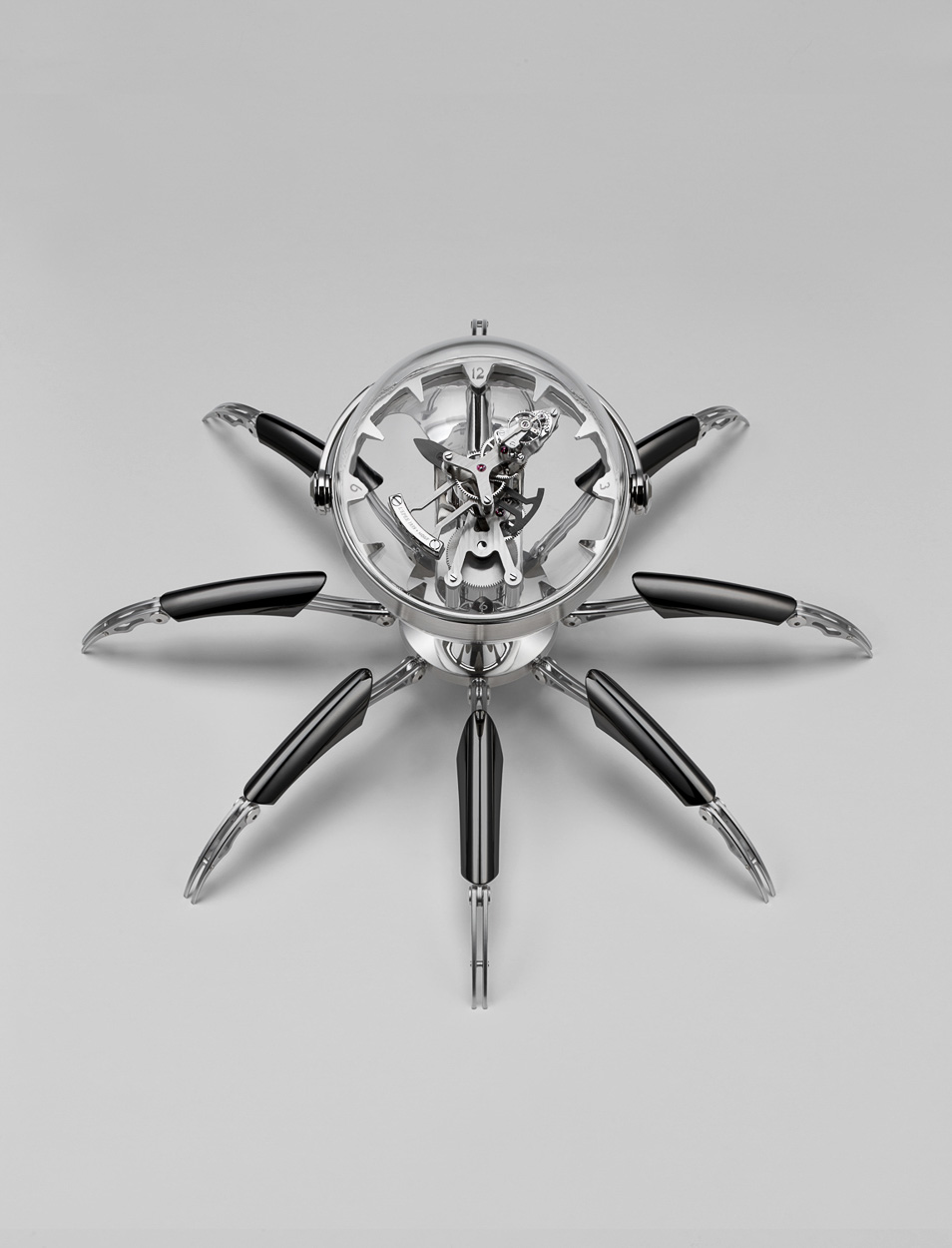 Just as their previous limited edition moon rocket clock the Octapod is part of their co-creations line. Again only available in a limited edition of 150 pieces in total. Divided into 3 colours schemes namely black PVD, blue PVD and palladium which is silver. Again they made an impressively cool clock that can be adjusted into different positions thanks to it’s 8 articulated legs. Because of that it doesn’t need a smooth surface to stand on. The sphere is fixed in a gimbal, just as they used to do with clocks and compasses on boats. This way the time display is always has the perfect angle for best readability. 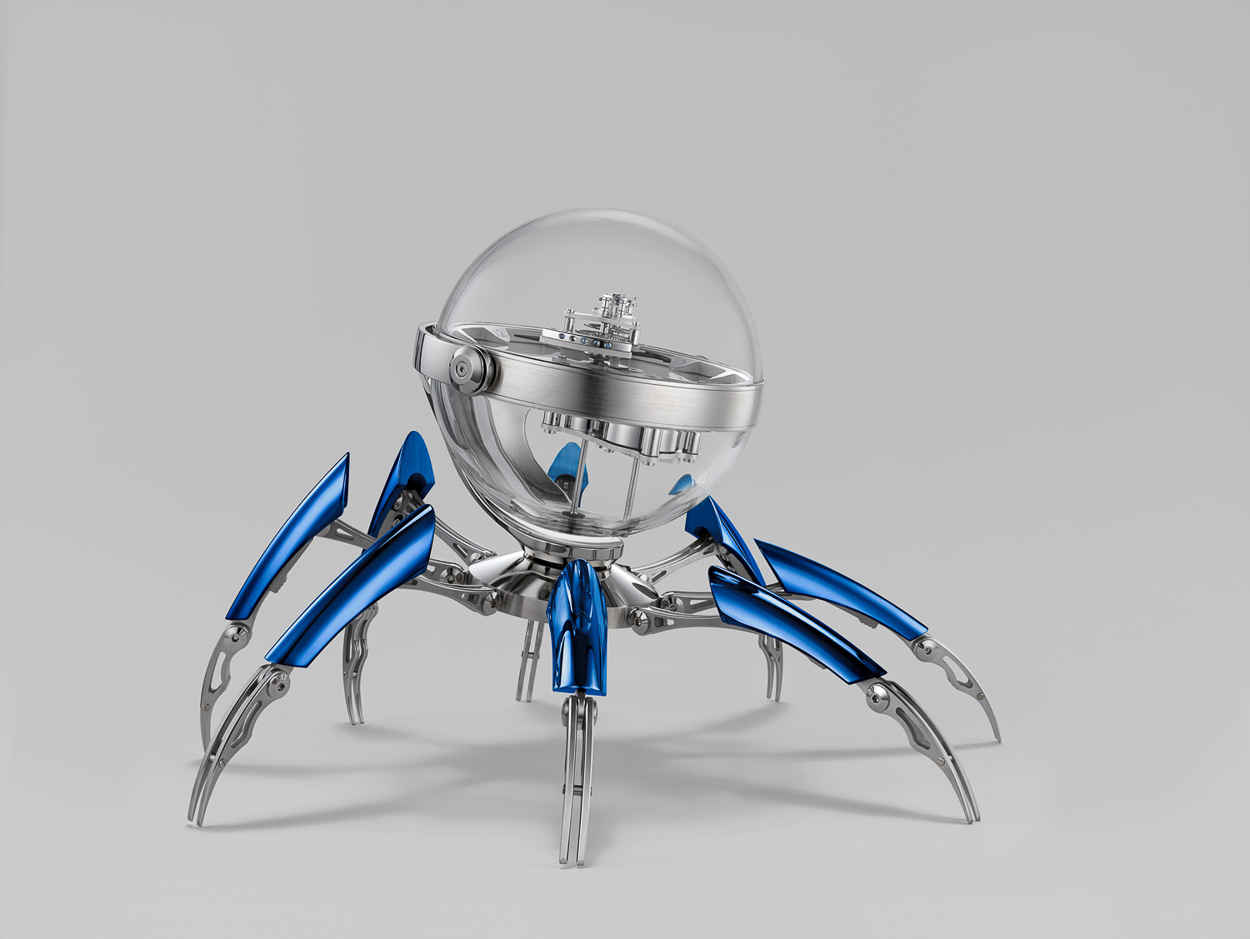 Octopod continues MB&F’s exploration of aquatic themes with an eight-leg, eight-day clock inspired by cephalopods, marine chronometers and The Abyss – blending contemporary design with kinetic sculpture and a transparent bubble filled with precision horology. Conceived by MB&F and built by Switzerland’s premier clock maker, L’Epée 1839, Octopod stands or crouches thanks to its eight articulated legs. Each leg can be individually adjusted to varying heights, enabling Octopod to rest securely on the most uneven of surfaces, just like a real octopus.

However, the real horological magic and mystery take place in Octopod’s completely transparent spherical ‘head’. The first thing to notice is that Octopod’s transparent sphere is gimballed in a similar way to how traditional ship chronometers were gimballed – although on one axis rather than two – so that they remained flat despite the pitching and rolling of the ship. In Octopod’s case, the gimbal ensures that no matter what angle or height it sits, it is easy to rotate the bubble so that the time display inside is at the ideal plane for maximum legibility. 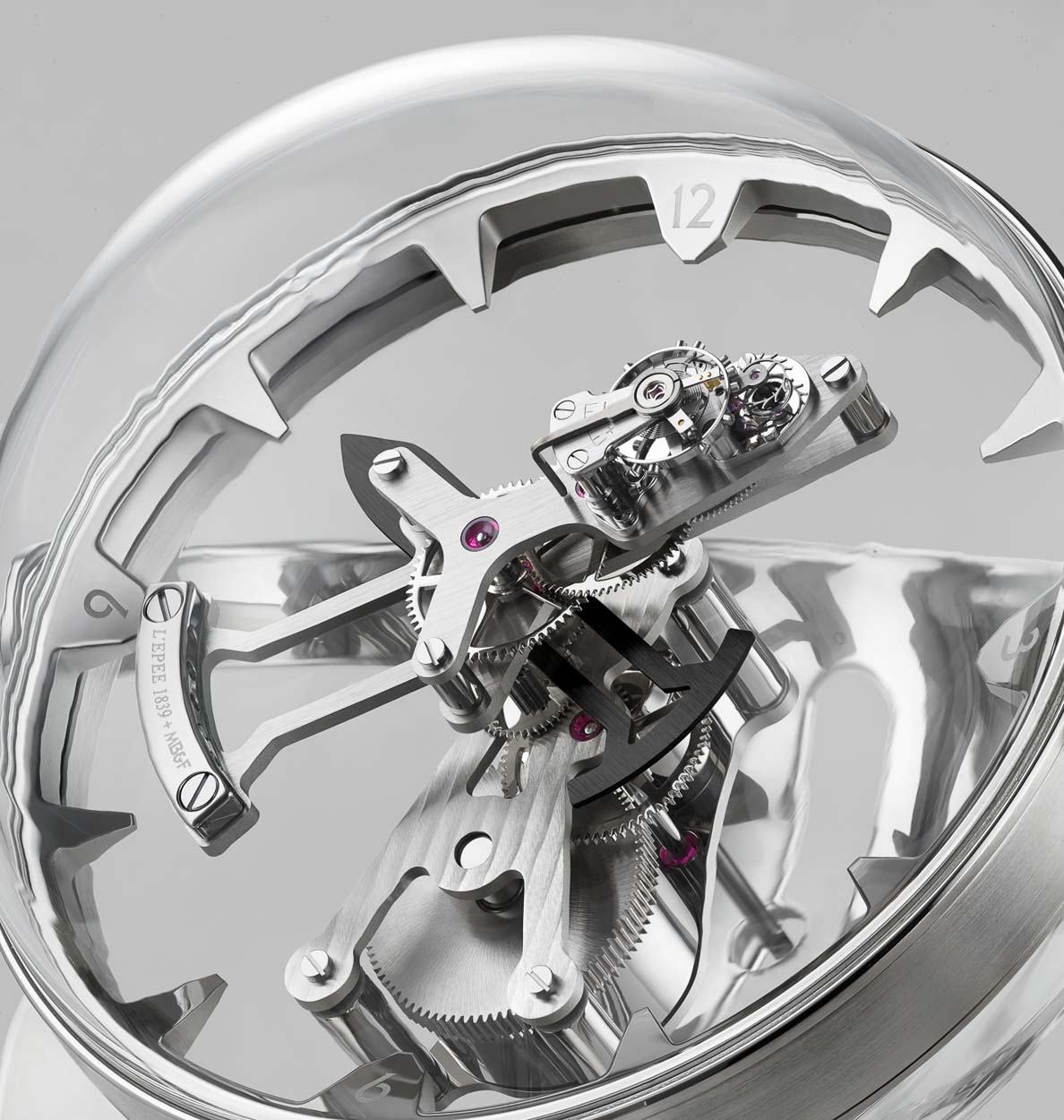 The second thing the attentive eye will notice is that Octopod’s pulsating escapement, which regulates the clock’s precision, is located on its minute hand rather than the more usual (and mechanically simpler) position attached to stationary movement plates. While not technically a tourbillon according to Abraham-Louis Breguet’s original patent, with its movement vertical, the 60-minute rotation of Octopod’s regulator on the minute hand is closer to the primary aim of Breguet’s invention. His intention was to rotate the escapement of a pocket watch sitting vertically in a fob pocket to average out positional errors, while wristwatch tourbillons are continually moving through all positions without requiring 360° rotations.

Thirdly there’s the mystery of how Octopod’s clockwork is suspended inside its crystalline sphere, so that it appears to be floating in space (or water). The baseplate of the movement is a transparent glass plate that has been treated with a film of anti-reflective coating on both sides so that it is virtually invisible. Like an octopus concealing parts of itself with camouflage, Octopod conceals parts of itself with visual tricks of its own.

Octopod’s eight-day movement is an entirely new development by L’Epée 1839, with both the glass baseplate and counterbalanced regulator posing particular challenges. Along with its octopus and marine chronometer connections to the sea, Octopod also brings to mind the then futuristic glass bathysphere of James Cameron’s 1989 film, The Abyss. While the viewer may be outside looking in at the transparent bubble, it’s easy to imagine sinking below the waves and looking out at the astonishing iridescent creatures of the deep oceans. However, you may well rest assured that despite its aquatic inspirations, Octopod is perfectly at home on dry land. 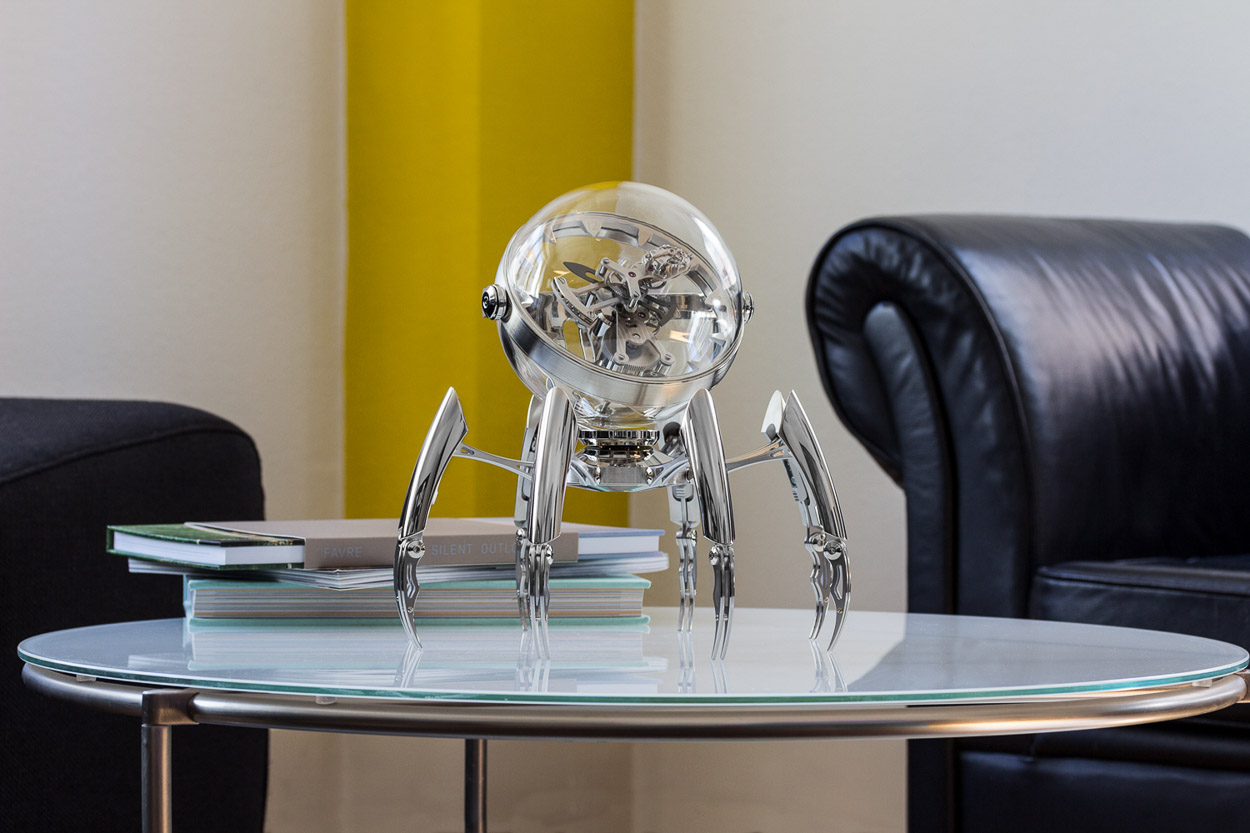 Octopod’s idiosyncratic design derives from three aquatic sources: the highly intelligent octopus with its ‘eight legs’ (more on that below) provided the inspiration for the eight articulated legs, while the gimballed traditional marine chronometer inspired the partially gimballed sphere housing the clockwork and time display. And then there is the transparent bubble evoking memories of the bathysphere in James Cameron’s 1989 sci-fi classic The Abyss. 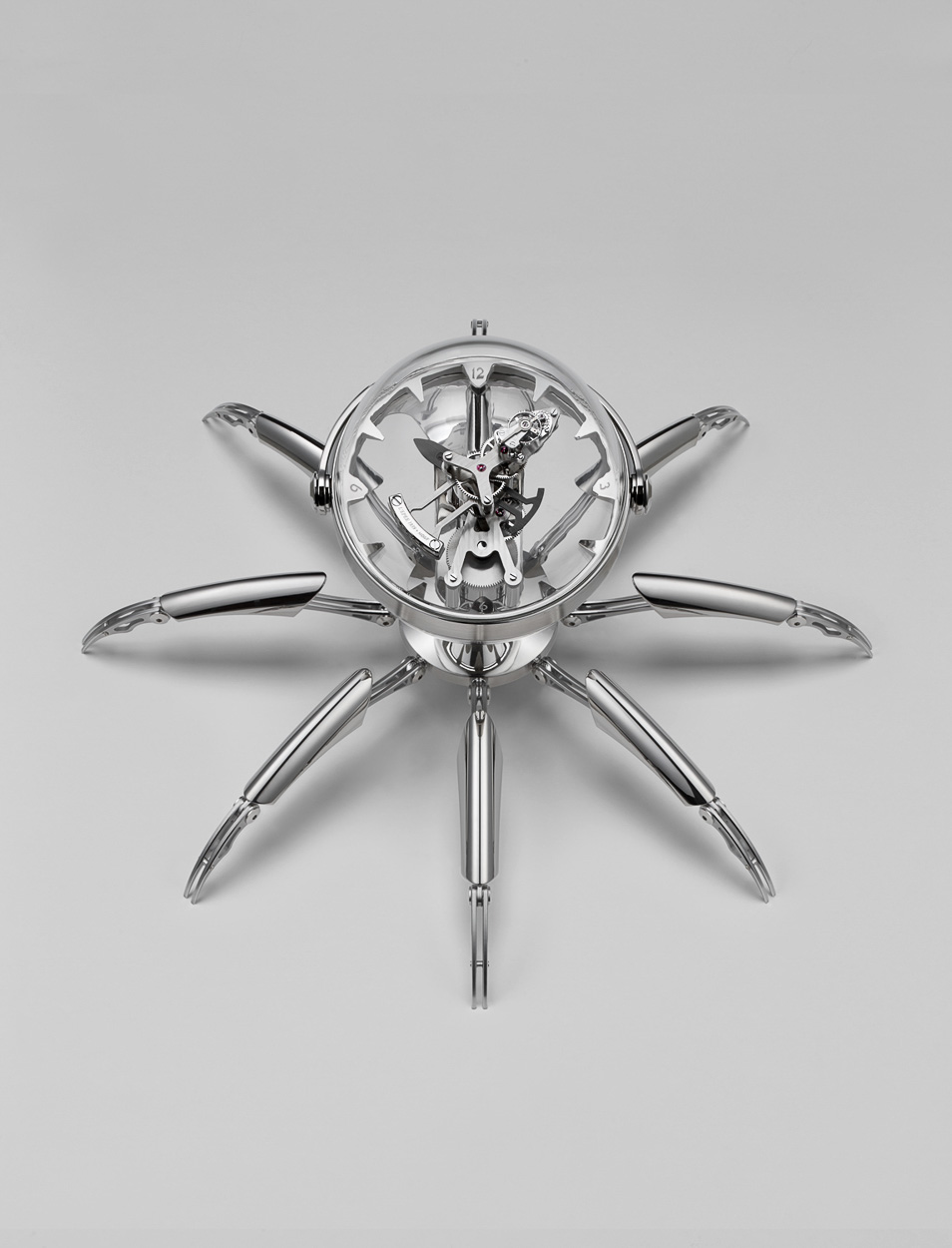 The original sketch MB&F gave to L’Epée 1839 showed the movement ‘floating’ inside the transparent bubble, but this was more to allow the manufacture more latitude in developing the support structure for the clockwork, than an expectation that a ‘floating’ movement was actually possible. Not for the first time (nor hopefully the last), L’Epée 1839 went far and beyond the brief to create something even more exceptional than planned.

While MB&F came up with the concept and design of the Octopod, it was L’Epée 1839, Switzerland’s premier clock maker, that developed the movement as well as the unusual transparent spherical case and articulated legs. L’Epée produces most of the components, puts them all together and regulates the high precision, eight-day clockwork.

While nothing about this atypical project was easy, L’Epée faced two major challenges. The first was in finding a supplier for the glass baseplate able to work to the tight tolerances required, as companies cutting and drilling glass were not used to working to the extreme precision demanded by horology. The complete movement is mounted on the glass baseplate, so the position of the diamond-drilled holes was of critical importance. 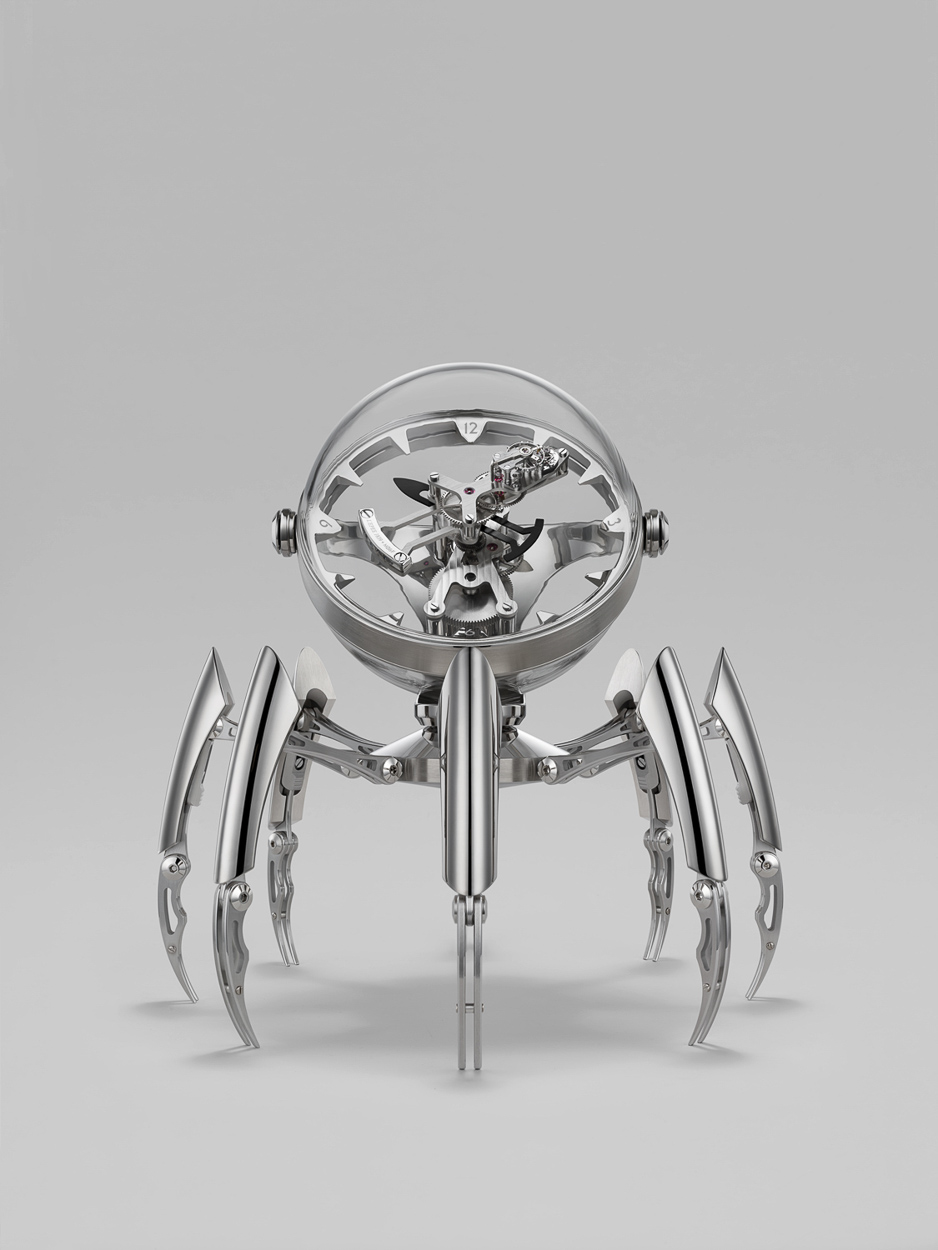 The second significant challenge was in having to adjust the counterweight for the regulator-bearing minute hand in three dimensions. Originally two counterweight screws were thought to suffice, but it was quickly discovered that five minuscule adjusters were necessary to ensure that the minute hand was perfectly balanced for optimal timekeeping precision.

Let’s get one thing out of the way first: it is ‘octopuses’ not ‘octopi’ as the root of the word comes from Greek, not Latin. And secondly, despite what is commonly thought, octopuses do not have eight legs (or even eight arms), but two legs and six arms. The cephalopods use their two rear appendages (legs) for locomotion or propulsion when moving along the sea bed and their six arms for manipulating food and objects. While all of their limbs look similar, they are anatomically three pairs of arms and a pair of legs.

Octopuses are very intelligent creatures and are the most intelligent of invertebrates. Maze and problem-solving experiments have indicated sophisticated memory systems and some species have been observed using tools. When threatened, octopuses have a number of defences including very effective camouflage (their skin can change colour like a chameleon), water with jet propulsion, and releasing a cloud of ink to obscure and confuse.

Octopod is available in 3 limited editions of 50 pieces each in black PVD, blue PVD, and palladium (silver).