I do have the pleasure to present you a very particular watch just two days before the doors of the SIHH 2013 open. Follow me and discover in an online-premiere the Roger Dubuis Excalibur Quatuor …

To make the story short: The Roger Dubuis Excalibur Quatuor will be one of the stars of the upcoming SIHH 2013. Many of my colleagues and many visitors will only discover this watch at the SIHH. But you instead you can discover it right now… So let me show and describe to you the Quatuor:

You all do of course know that gravity does influence our mechanical watches. A system devised and patented by Abraham-Louis Breguet in the year 1801 to compensate the errors of rate caused by the Earth’s gravitational force in vertical positions was at the time the answer given to that problem by a watchmaker genius. The tourbillon comprises a moving frame which carries all the escapement organs and in its centre the regulating organ. We know that the rate of a watch differs according to the position in which it is observed. This is mainly caused by the imbalance of the balance wheel and it´s balance-spring during its oscillations. Friction also matters and here in particular those caused by components imperfectly well balanced.

In order to abandon these differences, it would be necessary that the centre of gravity of the balance-spring would be at the rotation centre and to stay there during all oscillations, but this is practically impossible. In order to succeed, Abraham-Louis Breguet had in the year 1795 the idea of putting the escapement unit into every position by imposing on it a rotation of generally one turn per minute. Under these conditions a mix of positions is achieved which ultimately results in an average rate.

The pinion of the escapement wheel turns around the seconds wheel which is fixed. The frame, as already mentioned, usually performs one turn a minute and compensates by turning the rate errors in the vertical position. At the time being the usual position for a pocket watch. This delicate and complex mechanism is among the more ingenious mechanical combinations in watchmaking. To simplify this mechanism watches known as carrousel watches have been made in which the turning device is controlled, not by the seconds wheel, but by the middle wheel.

Today many Purists consider this function to be useless on wrist-watches because it was intended, historically speaking, for pocket watches which are always upright in the pockets of their owners. In fact wrist movements should be sufficient to randomly compensate for the effects of gravity.

This is how the watch works: The four carefully positioned sprung balances work in pairs to compensate immediately for the rate variations caused by the changes in position. What the tourbillon achieves over the course of for instance a minute, the Excalibur Quatuor achieves instantly. More than this a classic watch operating at a frequency of 4 Hz is considered to be highly precise. But the Excalibur Quatuor raises the bar much higher with its frequency of 16 Hz. This is an exceptional performance: the 16 Hz refers to the basic movement and not just one of its functions. As each balance vibrates four times per second the frequency of the watch is multiplied by four as the balances do not oscillate simultaneously. The well-known ticking of a classic watch is now replaced by the gentler “sound” of truly high precision. In fact the “sound” of the Excalibur Quatuor is impressing.

The Roger Dubuis is a watchmaking masterpiece that not only integrates four sprung balances and an original power-reserve display, but includes no fewer than five differentials. Three of them link the balances in the gear train, one in the centre and the two others on the balance staffs, providing an average of the positions for even greater accuracy. The fourth differential controls the power-reserve transmission, while the fifth connects the rewinding stem and the two parallel barrels. Master watchmakers, engineers and designers have worked hand-in-hand at each stage of development to achieve a perfect fusion of technique and design. Maintaining this balance has affected even the smallest step forward. It has influenced the concept, fabrication, adjustment and the decoration by hand of all the 590 components of the calibre RD101.

Roger Dubuis told me that the Excalibur Quatuor would cost 350.000 CHF before taxes.

Despite all discussions concerning tourbillons and similar developments however there is a recognised interest in all these developments. For the tourbillon because regular rotations of the frame outweigh the random movement of the wearer and it’s a function that requires detailed knowledge and becomes in the end – if done entirely in-house – the proof of technical competence for the producer. 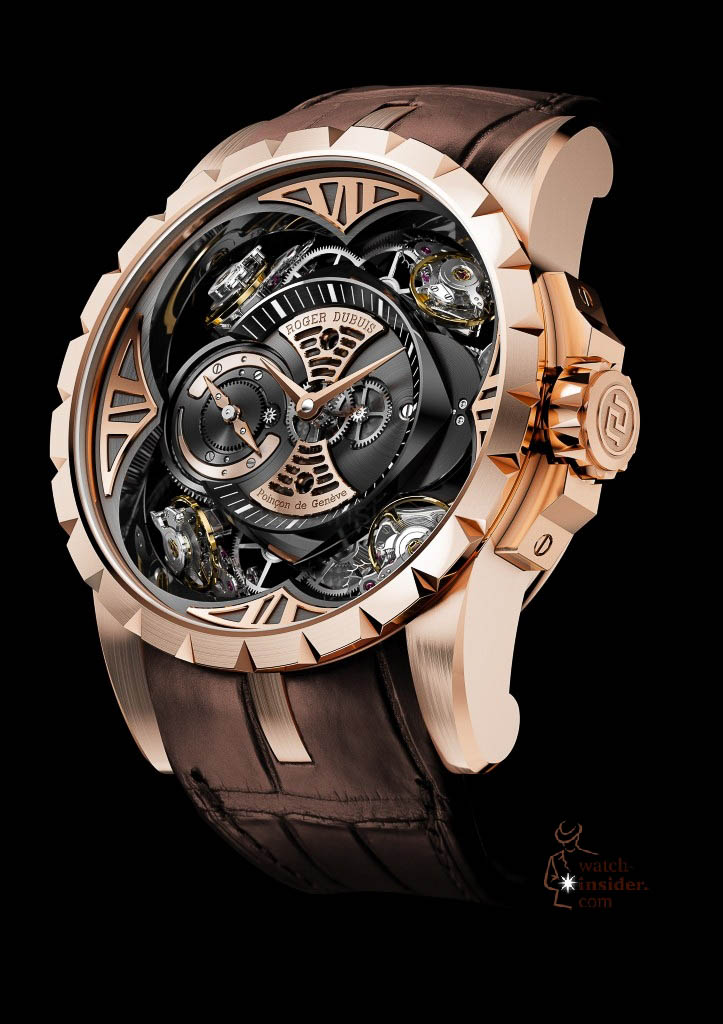 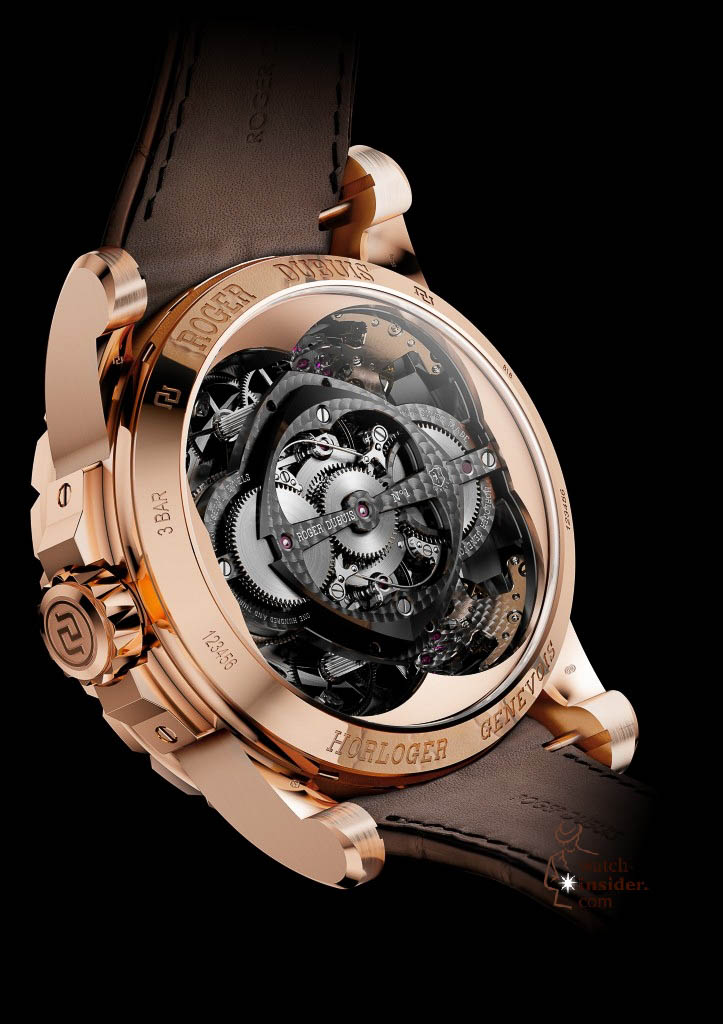 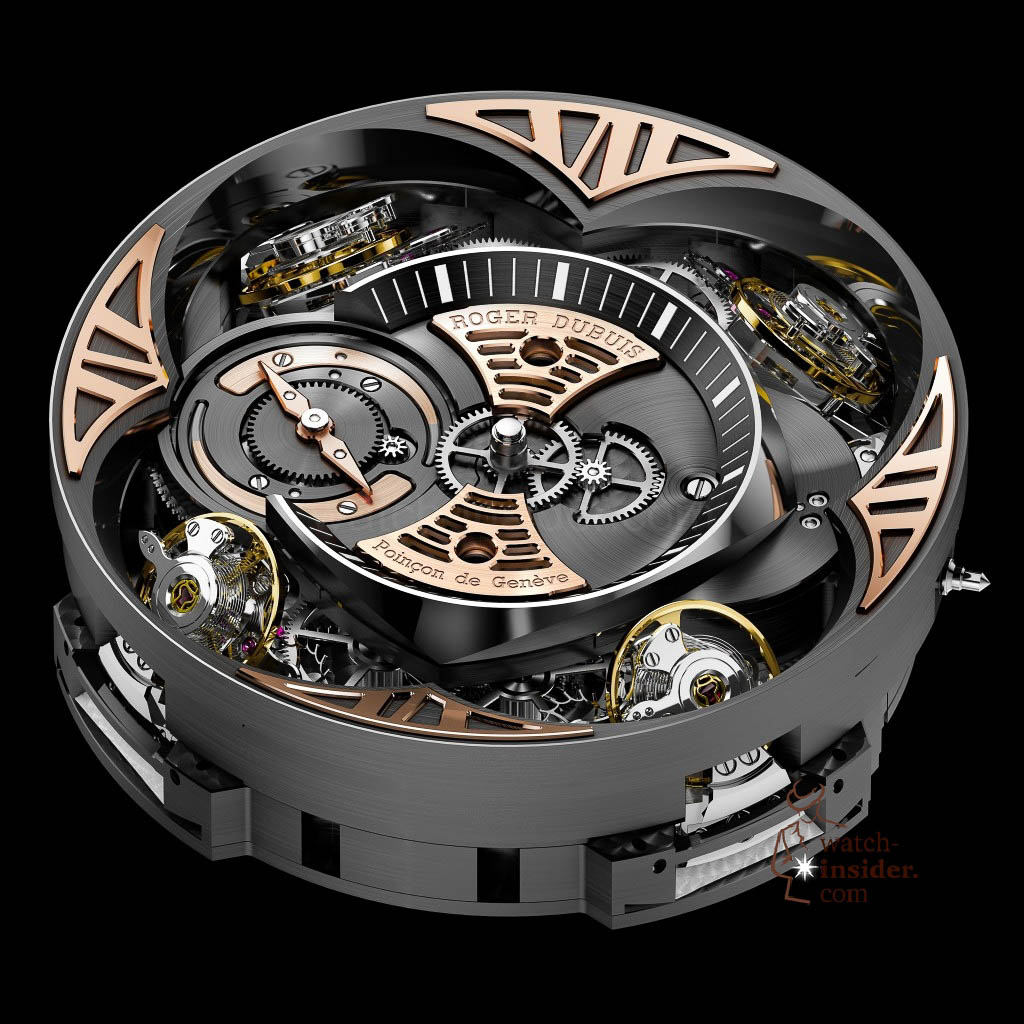 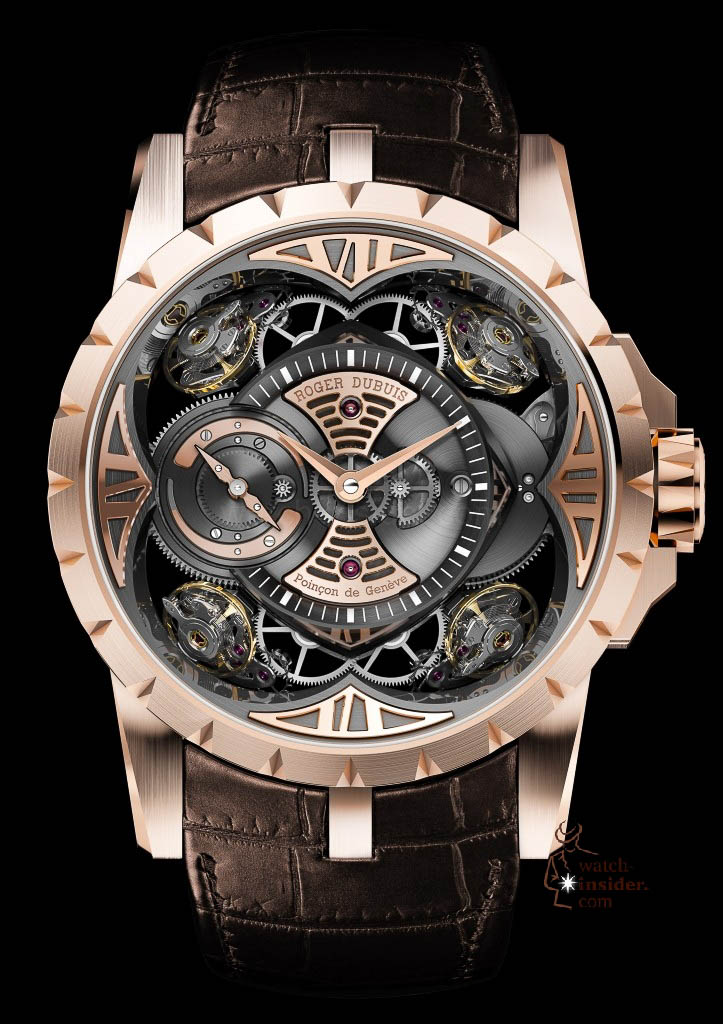 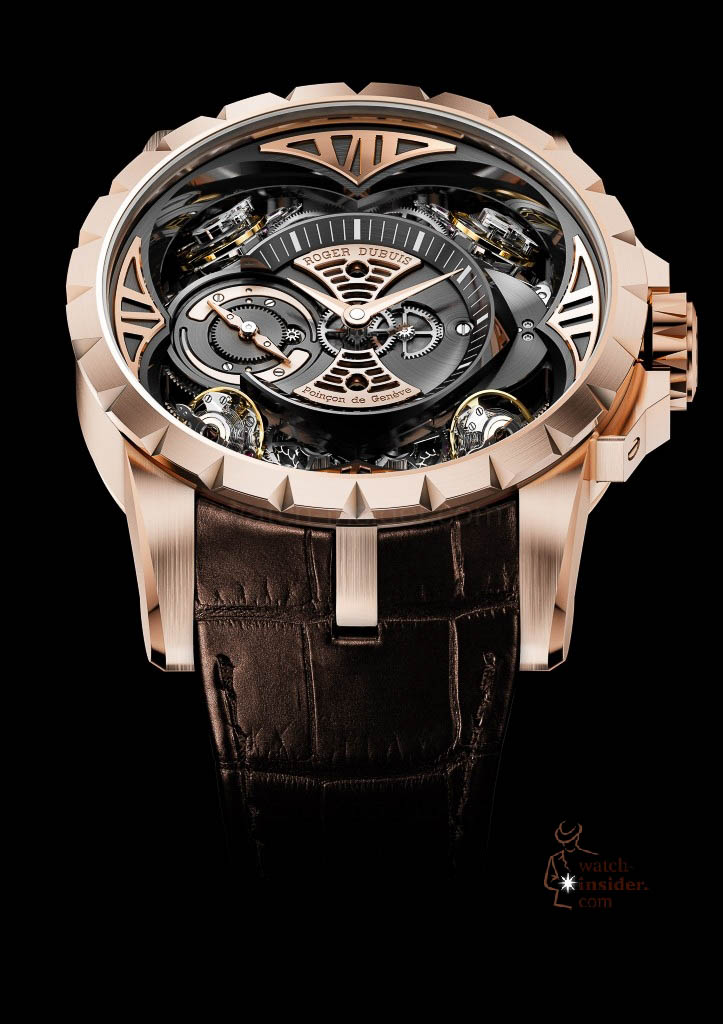 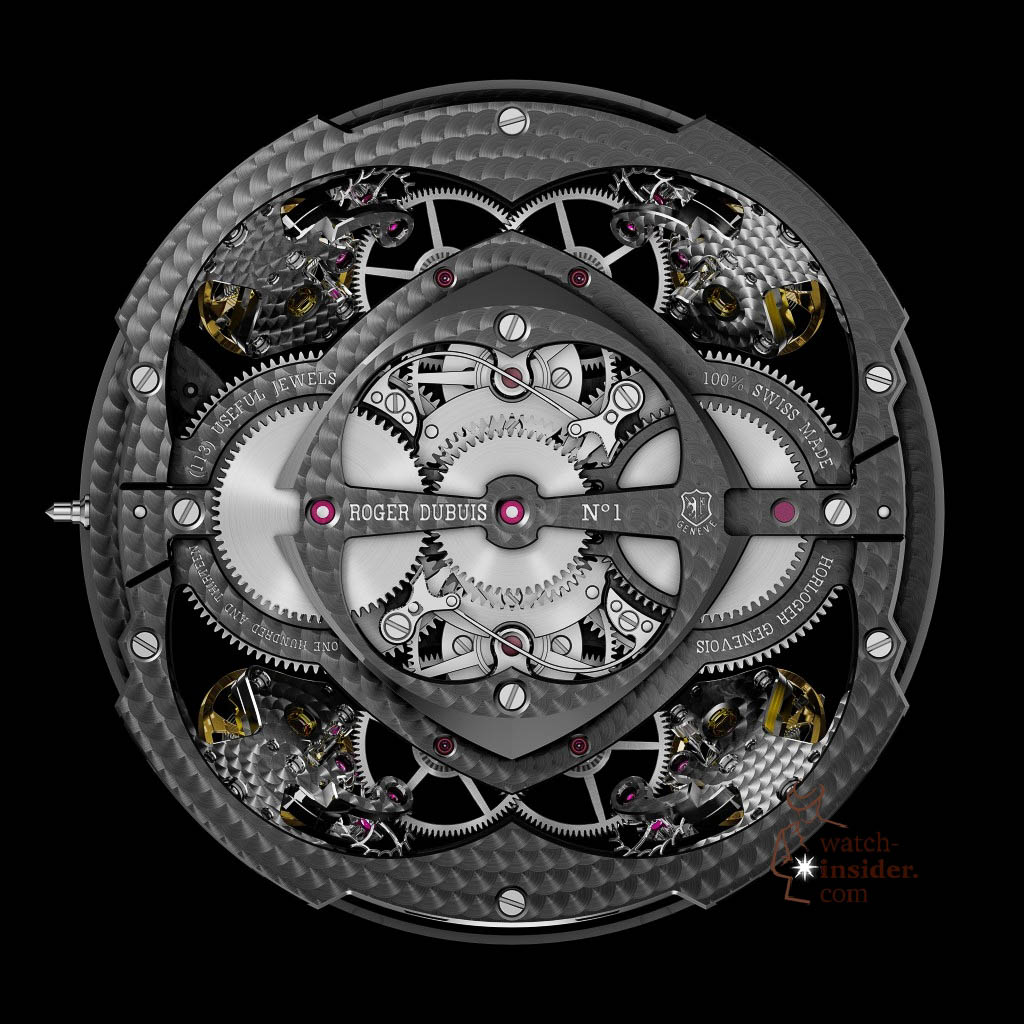 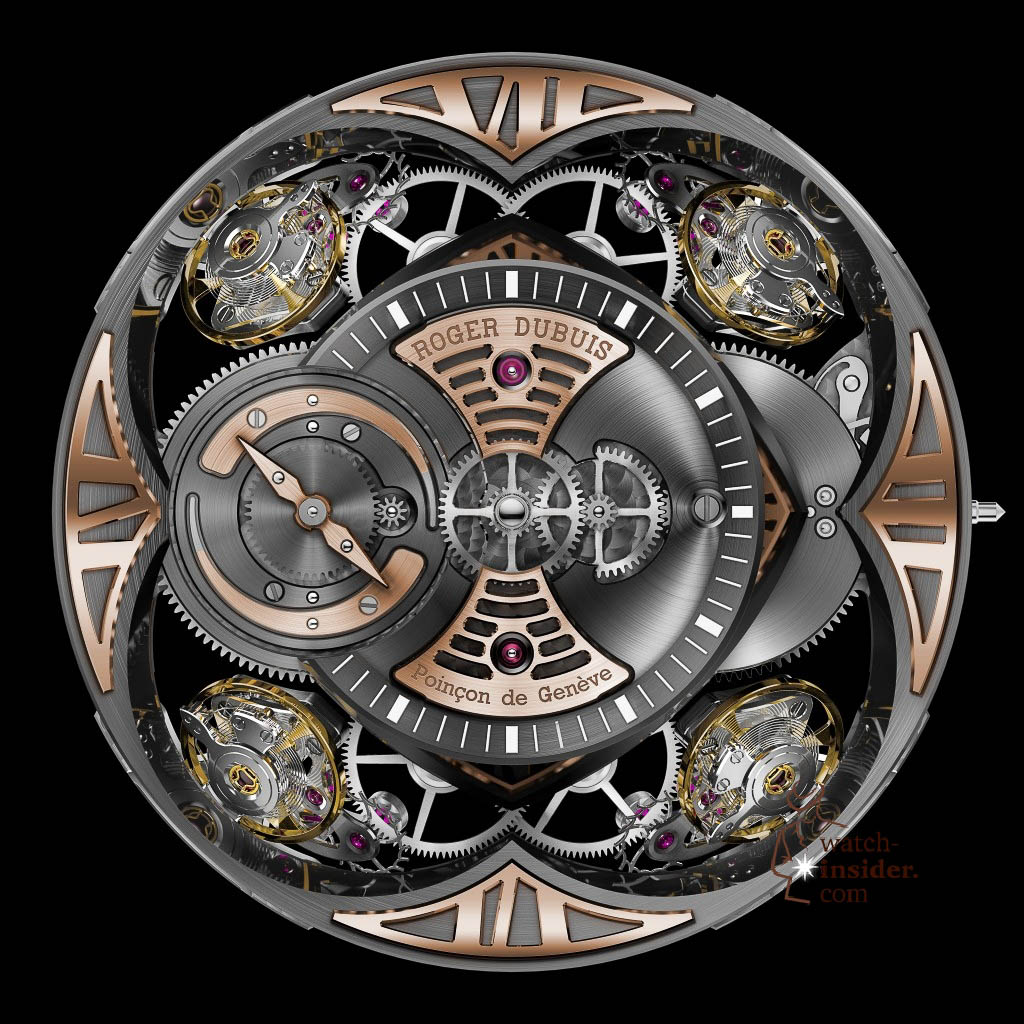 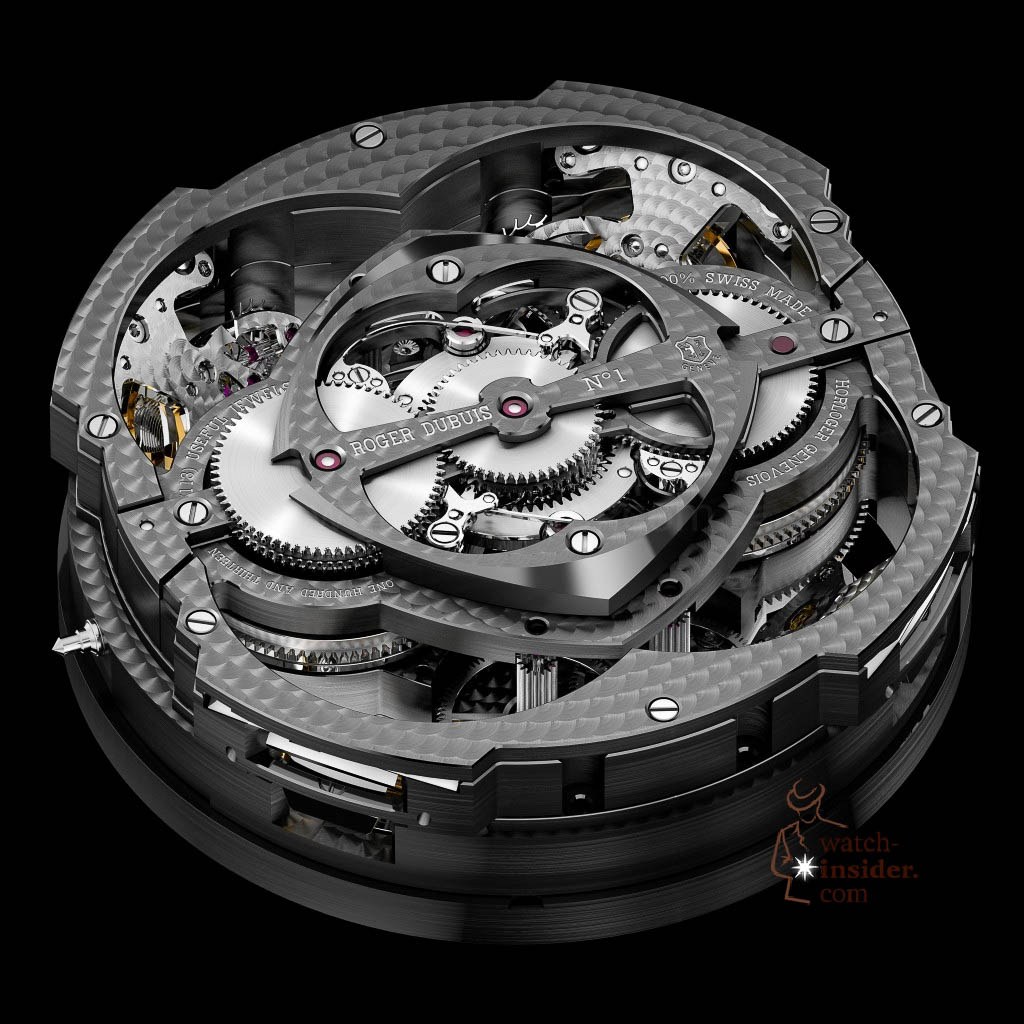 0 replies on “This is a Pre-SIHH watch-insider.com exclusive look at the Roger Dubuis Excalibur Quatuor”