Richard Mille and Airbus Corporate Jets (ACJ) launch a new watch, featuring an all new grand complication. The RM 62-01 Tourbillon Vibrating Alarm ACJ is the most complicated watch Richard Mille has ever created.

The second iteration of a collaboration between Richard Mille and Airbus Corporate Jets (ACJ), the Airbus subsidiary commercializing bespoke private aircraft, the RM 62-01 Tourbillon Vibrating Alarm ACJ offers a particular focus on the traveler: “The RM 62-01 is imagined, prompting me to continue experiments begun with the RM 50-02 Tourbillon ACJ in a new kind of travel watch. The RM 62-01 is designed for the discretion prevailing in the hushed atmosphere of luxury. Transmitted exclusively by vibrations, its alarm function attests consideration and savoir-faire. It owes its existence to an absolutely singular technical approach. Supremely easy to use, this complication embodies a paradox. Normally, an effective alarm needs to be audible from afar. Ours however, needed to remain within the compass of a few millimeters.” 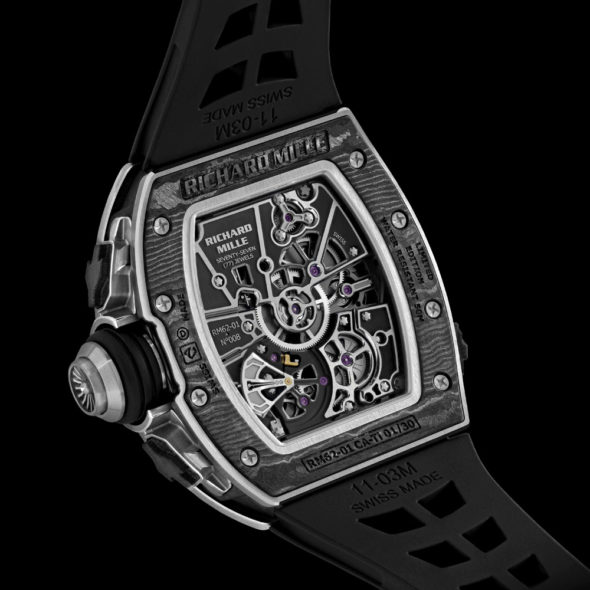 In other words, and in contrast to the traditional alarms and chimes of most horological pieces of yesteryear and today, that of the RM 62-01 is absolutely silent. Rather than a hammer that creates a sound by striking a pillar, a gong or the interior of the case, the time signal is transmitted by a vibration only the wearer can perceive.

This vibrating alarm had to be designed so as not to affect the watch movement, a major concern. This ultimately led to the idea of using an offset weight in solid gold, akin to an automatic rotor, inspired by the vibrating function of earlier mobile phones. “Before producing an entire movement, a wide range of technical questions had to be answered. Four partial prototypes and extensive studies based on models and space constraints were required in order to fit so many components and functionalities in the limited volume. There were 816 parts to be housed, 2 barrels, 7 hands, 11 displays and a tourbillon cage. One of our watch constructors worked on this full time for five years, sometimes with the help of an additional watch constructor, with progress meetings every two weeks.”

Written By
Watch-Insider
More from Watch-Insider
Today, 5.6 million men are living with or beyond prostate cancer. This year, Oris...
Read More