When presented the first time in 1957 the Altiplano was ahead of time. Let´s look back and discover the anniversary collection. Bonjour Madame Chabi Nouri!

Just before I start I want to let you know that today Ms Chabi Nouri was officially announced to be the next CEO of Piaget. I informed you two days ago that this will happen very soon.

Valentin Piaget literally revolutionized the watchmaking world in the year 1957.

His ultra-thin “9P” manual-winding movement presented at the Mustermesse Basel caught a lot of attention. Being just 2 mm thick, the “9P” was welcomed for the elegance of its profile and its, as well as for its performance and its reliability. Above all, it enabled a broader 20.5 mm dial opening, heralding a new watchmaking aesthetic, while facilitating the construction of a remarkably slim timepiece.

Only three years later, in 1960, the founder’s grandson scored another success with the “12P”, an ultra-thin self-winding measuring just 2.3 mm. This previously unthinkable degree of thinness was made possible by the use of the 24-carat-gold off-centred micro-rotor, ensuring optimal barrel-spring winding efficiency.

Presented and advertised as “the watch of the international elite”, the ultra-thin Piaget Altiplano has evolved over the decades in perfect sync with the times. When pop culture reigned supreme, dials turned colorful with hard ruby, tiger’s eye, lapis lazuli, coral, malachite, onyx and jade stones. White and yellow case bezels and lugs were adorned with sophisticated “Clous de Paris” hobnail guilloché patterns or set with diamonds. Whether for 1970s businessmen in double-breasted suits flying to New York on Concorde; or for neo-dandies shunning any ostentation, the ultra-thin Piaget watch remained an inseparable companion.

“The Altiplano is celebrating its anniversary with its characteristic supreme elegance. Stemming from an ongoing dialogue between horological tradition and the new millennium, the anniversary collection opens up whole new horizons inspiring a lifestyle based on essential values. Among these, elegance released from any superficiality remains a benchmark, and absolute distinction a guiding principle”, said Piaget.

The dials with their graded shades radiate an original and refreshing mood entirely attuned to the codes of contemporary elegance. Feminine wrists are thus lit up by a vivid pink subtly transitioning from a more intense to a softer shade, magnificently framed by a case in polished white gold (G0A42109)

To fit inside this 40 mm case, Piaget has developed the Calibre “1203P”. Inspired by Calibre “1205P” – presented in 2013 as the natural heir to the “12P” –, this new self-winding movement picks up the essential elements of time read-off while adding the date.

The historical inscription “Piaget Automatique” – which appeared on the very first ultra-thin timepieces by the Maison – sets the signature touch to the new trio and honours the line’s rich history.

The two models – one manual-winding and the other self-winding – are inspired by the aesthetic characteristics of the first ultra-thin Piaget watches: an historical logo, applied gold hour-markers and a central cross, in tribute to the origins of the line. Each features a sunburst dial in the historical Piaget blue, a deep shade somewhere between cobalt and midnight blue.

The new Piaget Altiplano 38 mm-diameter model (460-piece limited edition) is powered by the manual-winding Calibre “430P” (2.1 mm thick). Developed, produced and decorated by Piaget, this movement has established itself as a worthy heir to the “9P”.

And last but not least the prices of the new Piaget Altiplano watches including 19/20 % VAT. 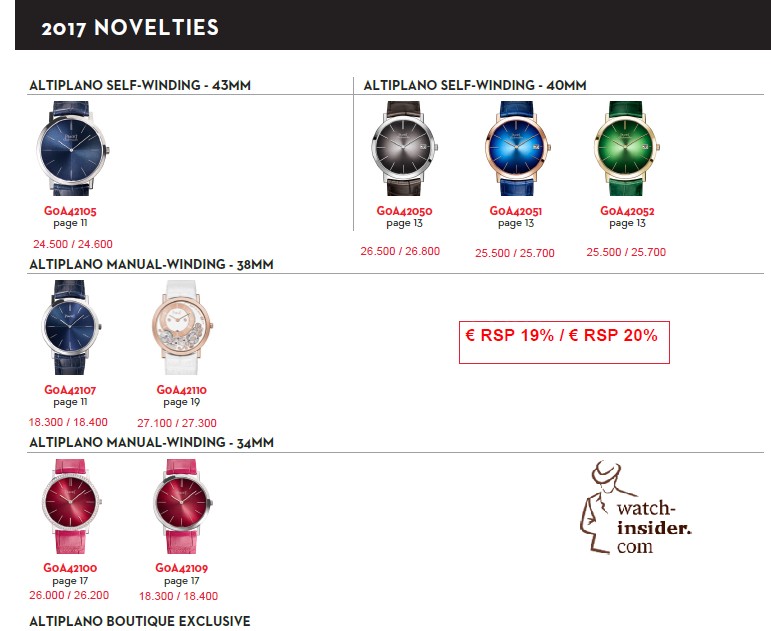 Written By
Alexander Linz
More from Alexander Linz
I was among the first one to show you the IWC Aquatimer novelties....
Read More