Year by year tons of watches are counterfeited and then sold to the public. The Swiss Anti-Counterfeiting and Piracy Platform would like to attract your attention by announcing a big film competition. Do you want to attend? Are you interested?

I do provide you herewith all the necessary information if you wish to produce a short film and enter the competition taken 1:1 from the Swiss Anti-Counterfeiting and Piracy Platform. So if you are creative and willing to produce a short film, you can do so by sending it in time to the platform. If chosen to be the winner you will of course be honored and you will win a Swiss watch for 4000.- Swiss Franks. I from my side will of course support your project and show the film also here on my blog. It like the idea that maybe your project started here by reading my blog 🙂

Here are the official information for the project:

Counterfeiting is a serious global problem which affects products of every kind: from pharmaceuticals to DVDs and including watches, garments, fragrances, spare parts of cars and much more besides. It is managed by criminal networks which enrich themselves unlawfully while in the most serious cases putting consumers’ lives at risk. Everybody is affected and joint action by everyone to prevent counterfeiting is imperative.

The Swiss day against counterfeiting is organized annually under the aegis of STOP PIRACY, the Swiss platform for the prevention of counterfeiting and piracy. The purpose of this day is to make the general public more aware of this serious issue. For the year 2013, the Federation of the Swiss Watch Industry FH has the task of organizing this day. The event will be held on Friday, 22 March 2013, at the Federal Polytechnic School in Lausanne (EPFL).

On this occasion, a big film competition will enable the public to express its views on the issue of counterfeiting and piracy from the angle of the watchmaking and pharmaceutical industry or from that of the audio-visual sector. From 1 October to 23 December, anyone may place one or more short films on this site and by doing so take part in the competition.

The public may then vote and choose the best film. A jury comprising well-known Swiss personalities will also award a “jury’s choice” prize. The authors of the two prize-winning films will each win a magnificent Swiss watch with a value of 4,000 francs.

Films in French, German or English or silent films must not last for more than 90 seconds and must be placed on this site before midnight on 23 December. The competition regulation and all information about counterfeiting will be found on the pages of this site.

Piracy of works under copyright

And here is picture of the watch you may win… 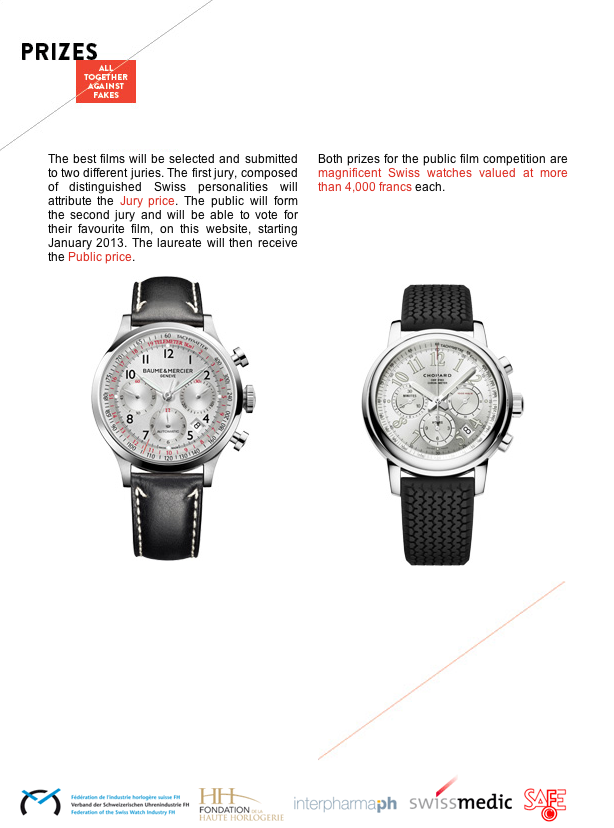