For the 50th anniversary of Jury Gagarin´s space flight a Russian Oligarch commissioned the first edition of this spectacular watch in 2011. Now the story continues …

I just talked to Bernhard Lederer on the phone and he told me that the new version of its Gagarin Tourbillon shows a world map on which you virtually can follow Jury Gagarin´s 108 minute flight back in 1951. The original version, done for the Russian Oligarch, is a much more technical execution providing many details of Yuri Gagarin´s flight. To be precise, the dial with the micro-engraved text shows highlights of the flight. 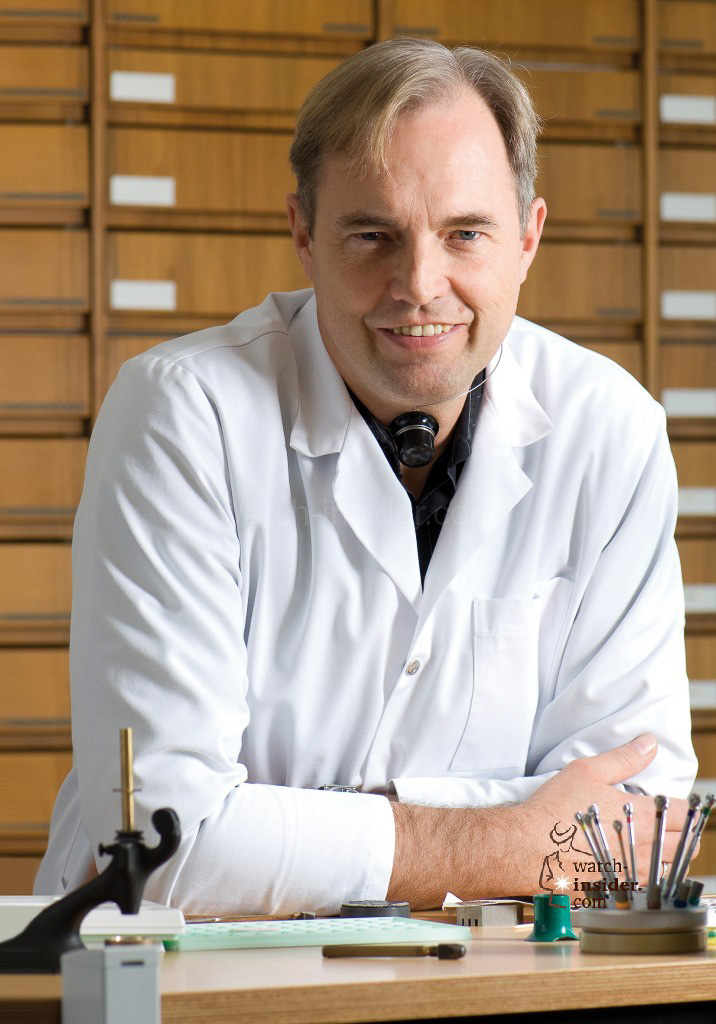 Yury Gagarin: On the morning of 12 April 1961, a 27-year-old Russian cosmonaut by the name of Yuri Gagarin walked out to the Vostok-1 rocket and was strapped into the pressurized capsule on its nose. At 06:07 UTC (09:07 Moscow time) the rocket lifted off and just 10 minutes later the final booster rocket burnt out and fell away. Now floating weightless, Yuri Gagarin became the first man in space.

108 minutes: Just over a hour later, retrorockets fired to slow the capsule down for reentry into the earth’s atmosphere. At an altitude of 7,000 metres (23,000 feet) Gagarin parachuted out of his re-entry module and 10 minutes later landed safely. In just 108 minutes after takeoff Gagarin had made a full orbit of the earth. For the first time, man had left our planet and returned. History was made.

Flying tourbillon: The Gagarin Tourbillon features a 60-second flying orbital tourbillon that rotates counterclockwise (symbolizing east) 360° around the dial in 108 minutes, which is the time Gagarin took to orbit the earth in the Vostok capsule. The tourbillon appears suspended by a sweeping bridge inspired by the large 25 m (82 ft) commemorative statue at Gagarin’s landing site near Engels. The tourbillon cage is formed by the word “VOSTOK” spelt vertically and curved around its perimeter. The hand finished mechanical movement of the Gagarin Tourbillon is manual winding with three mainspring barrels providing a power reserve of approximately 80 hours. The complex movement with 264 components and 35 jewels was entirely designed, developed and manufactured by Berhnard Lederer in Switzerland.

The new execution now shows a world map an you may now follow Yuri Gagarin´s flight over the earth.

Even when this video shows the “old” version, it helps to understand the details. Looking through the loupe to the dial is reminiscent of looking out of the Vostok space capsule towards the earth…

These are the pictures of Yury Gagarin and the first edition done for the Russian Oligarch to commemorate the 50th anniversary of Yuri Gagarin´s flight to space. Bernhard Lederer delivered the watch to his client in 2011. At this time it was also agreed that Bernhard Lederer may continue to built the watch for other clients and also, if requested, redo the very technical version first requested by the Russian Oligarch. 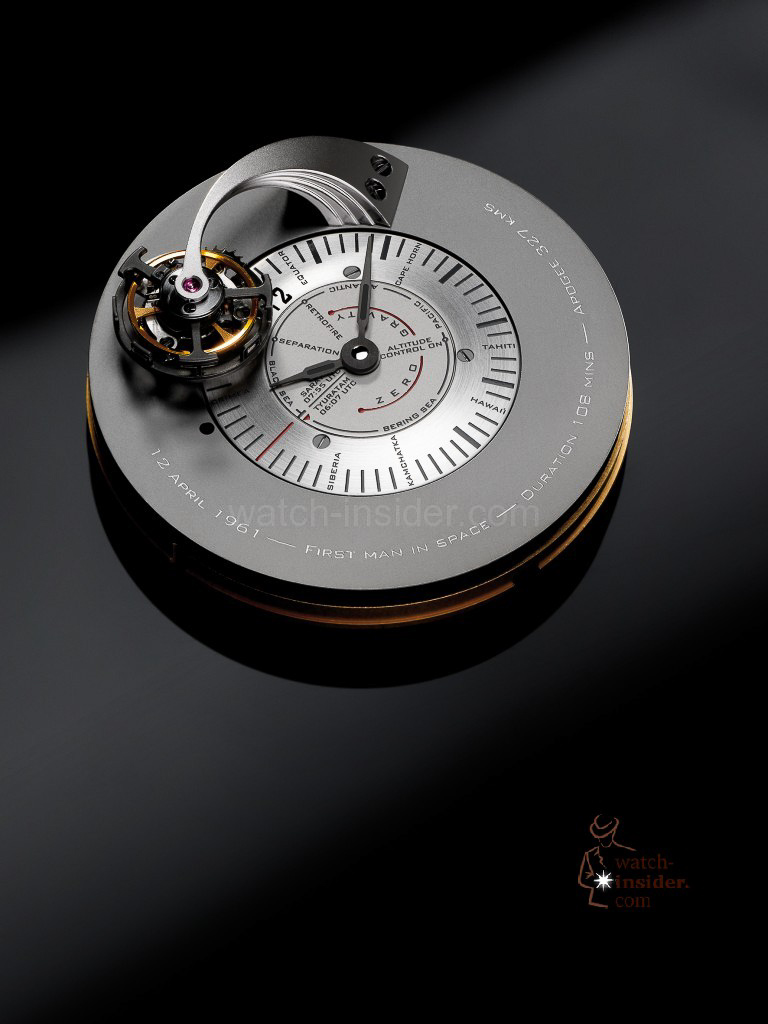 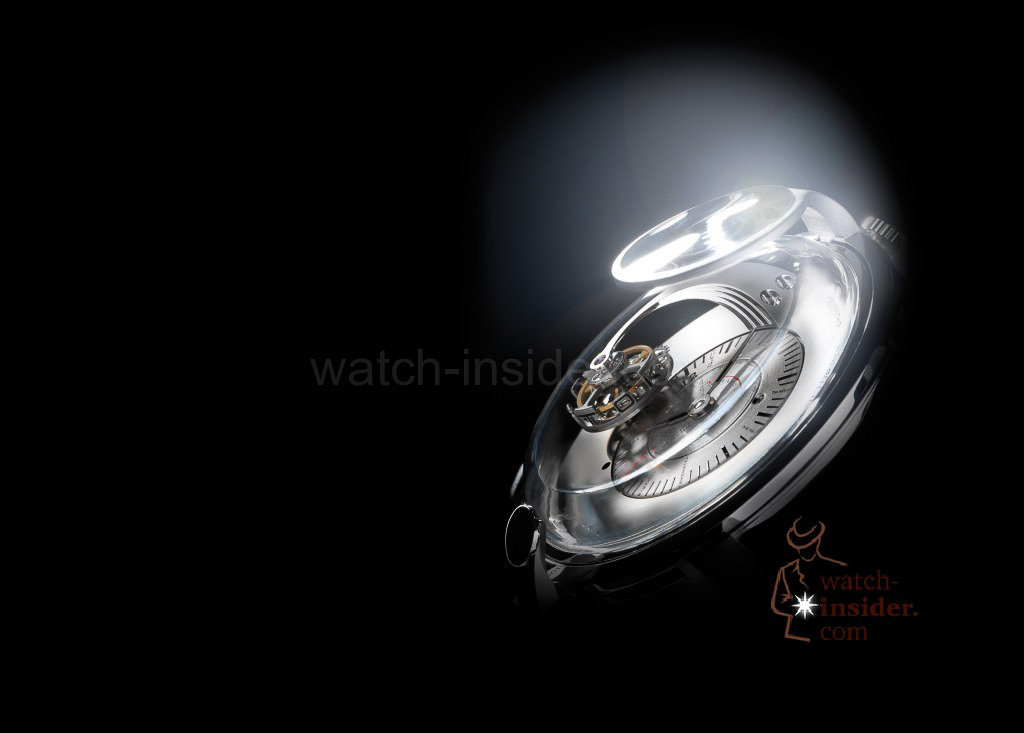 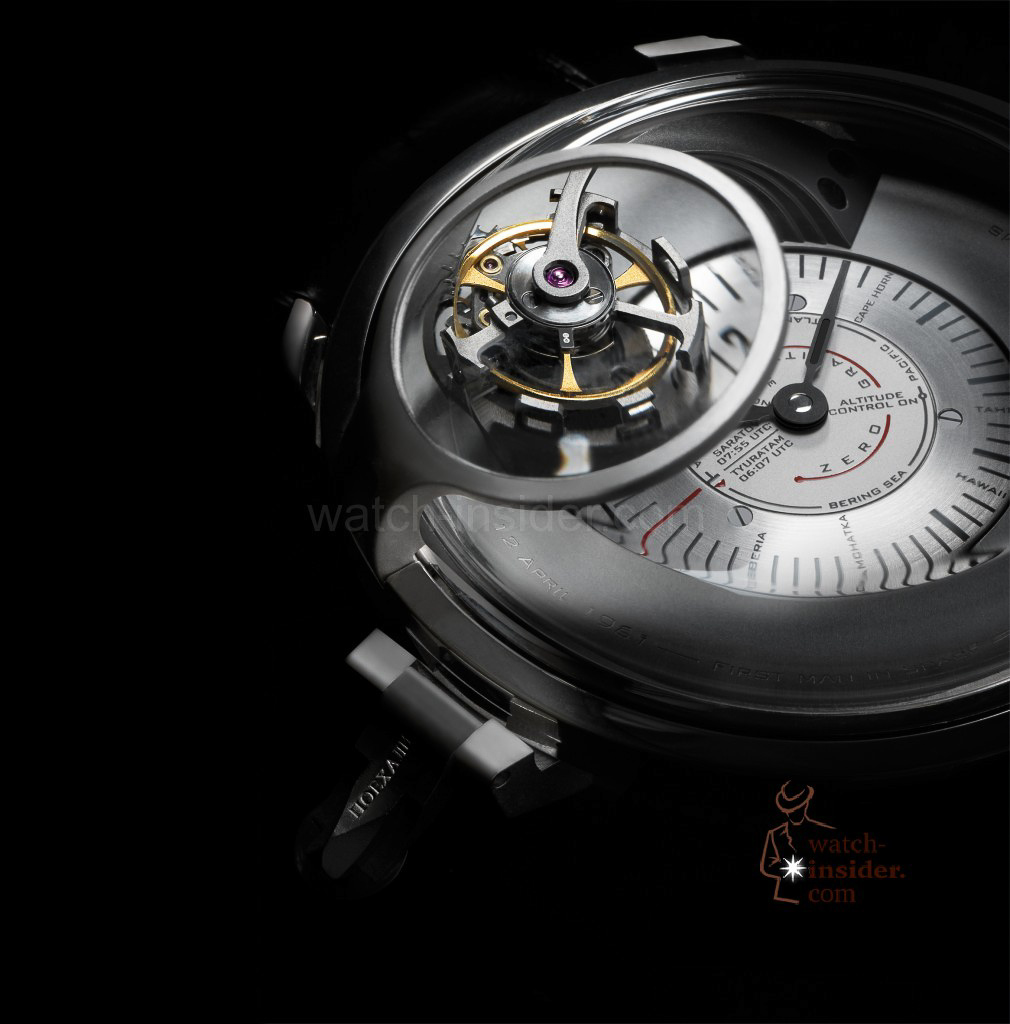 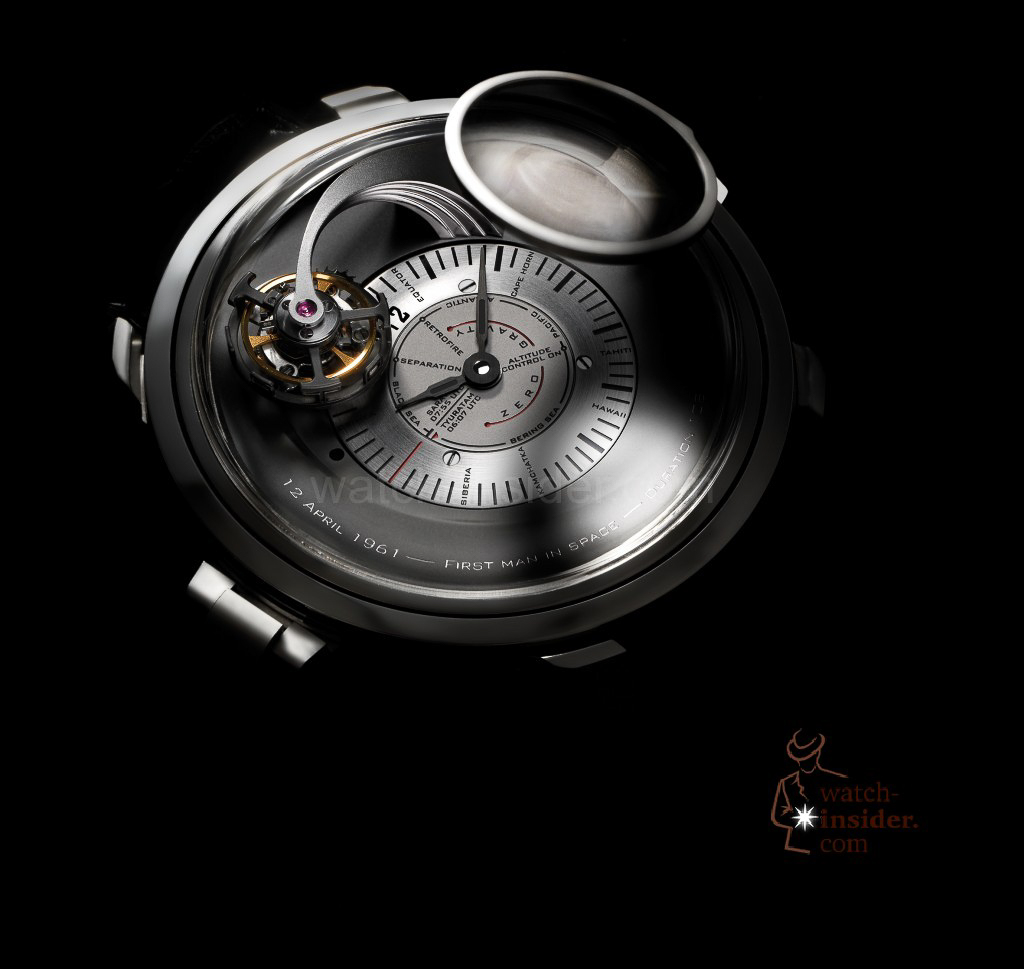 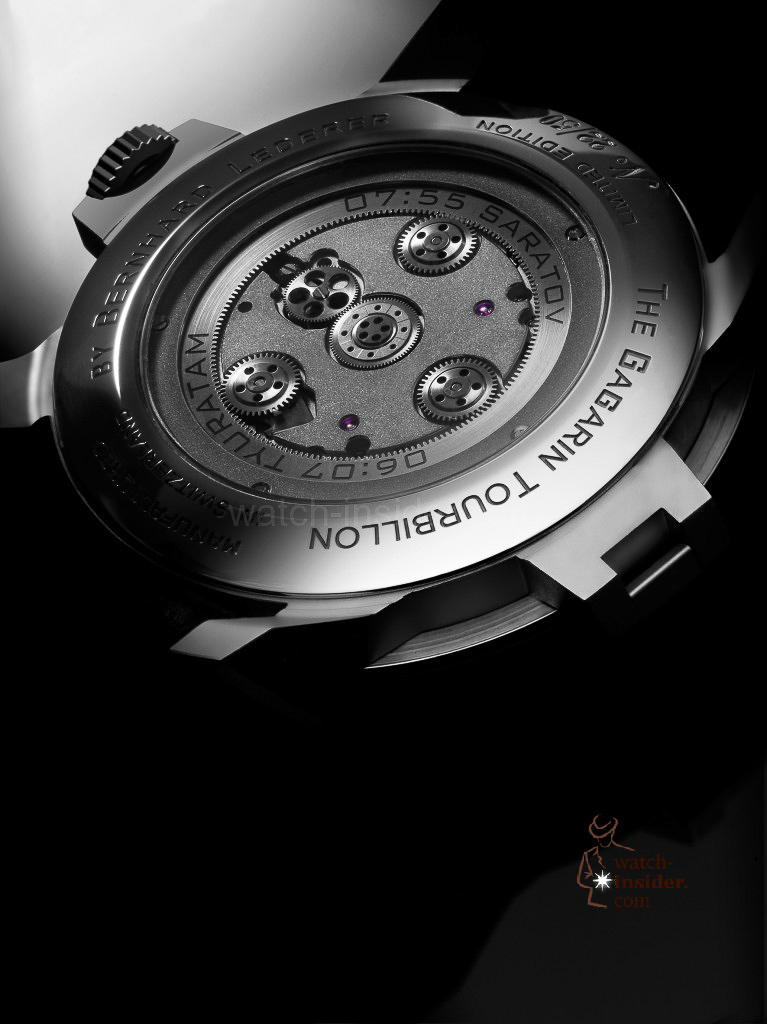 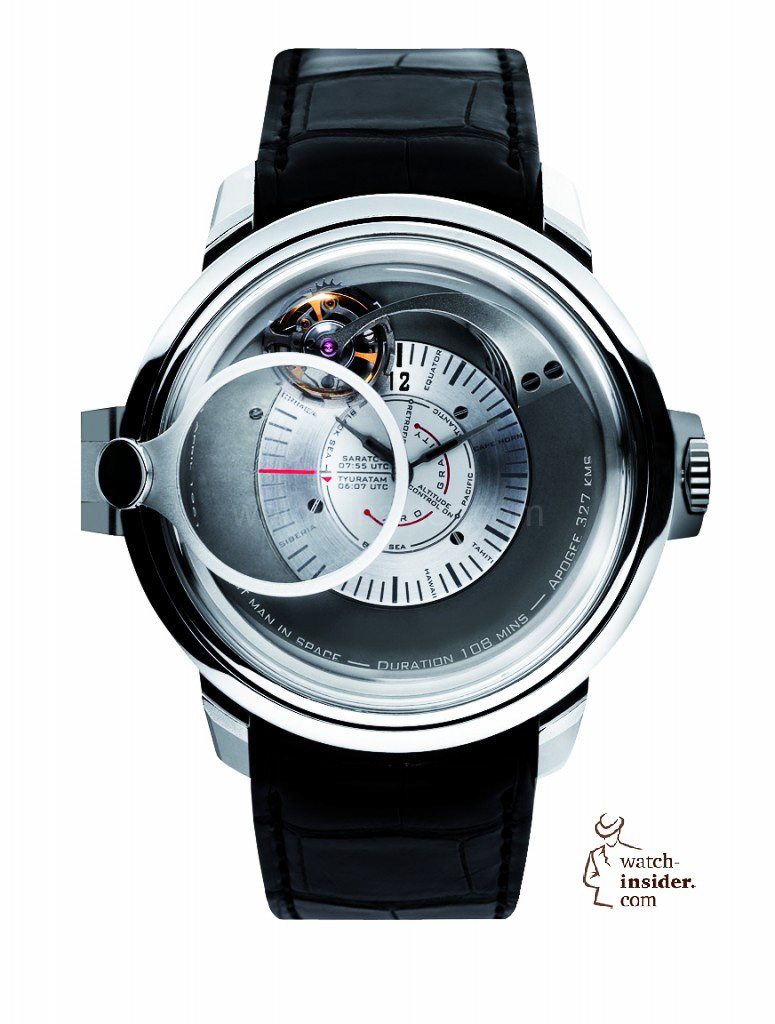 These are the new executions with the world map.

What I like is the case of the Gagarin Tourbillon: It incorporates an integrated rotating magnifying glass that allows more detailed appreciation of the tourbillon and details on the dial. The magnifying glass is locked in place by a catch inspired by a hatch on the Vostok capsule. 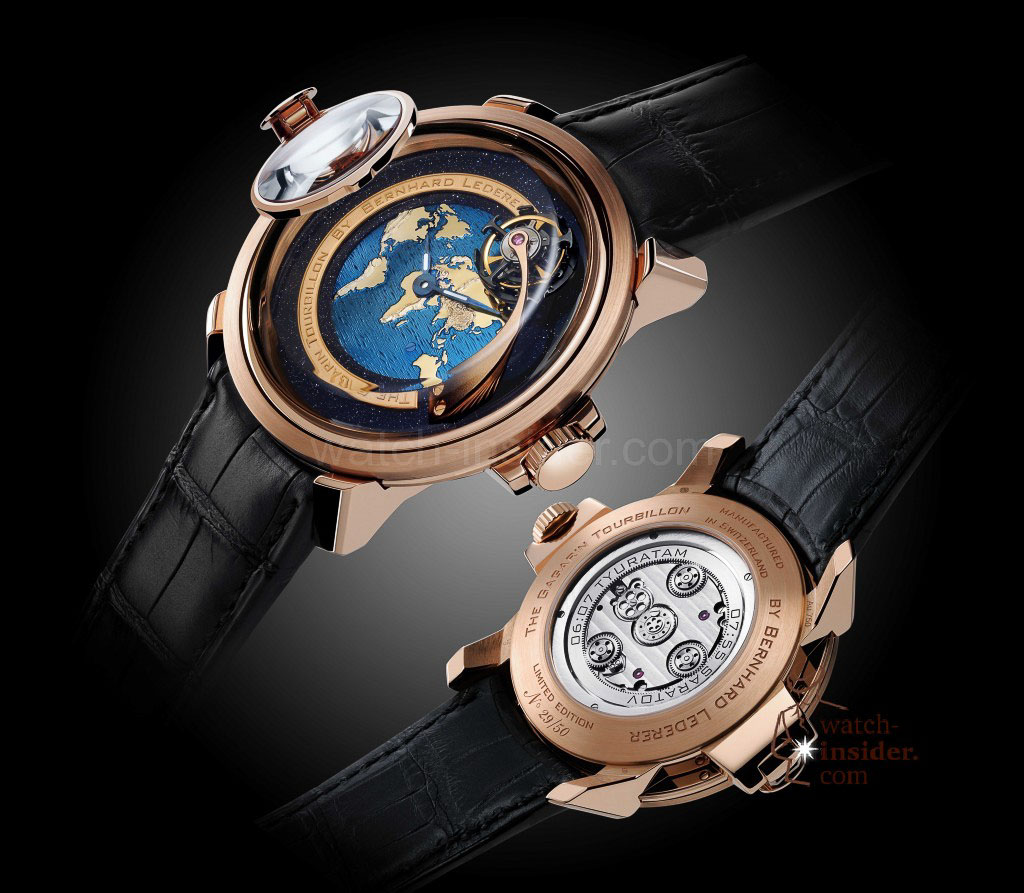 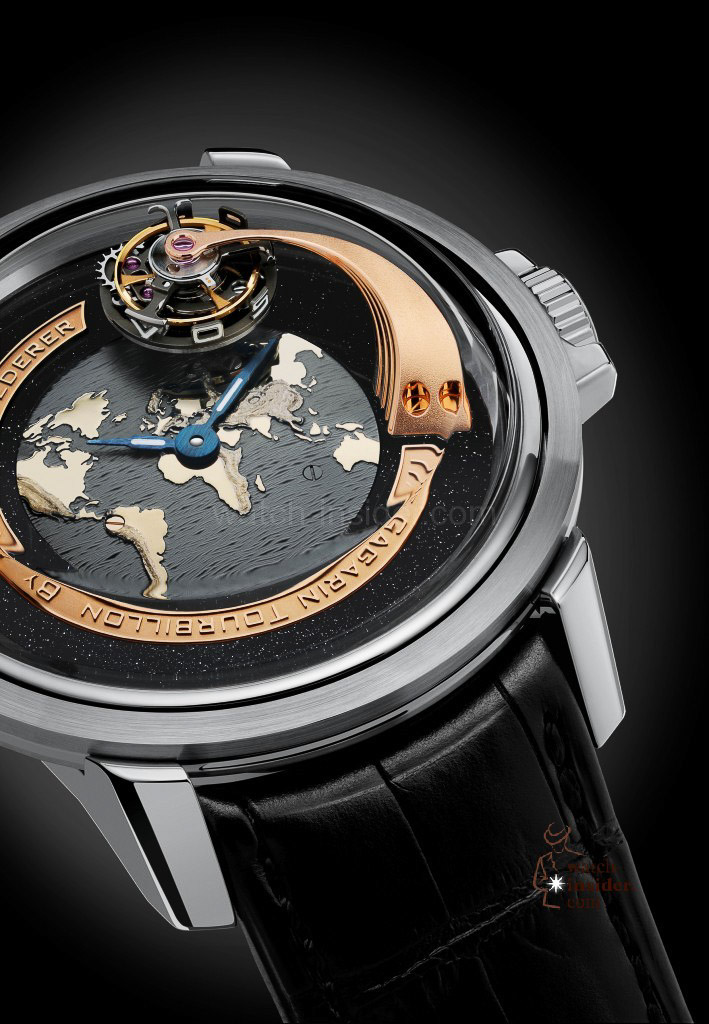 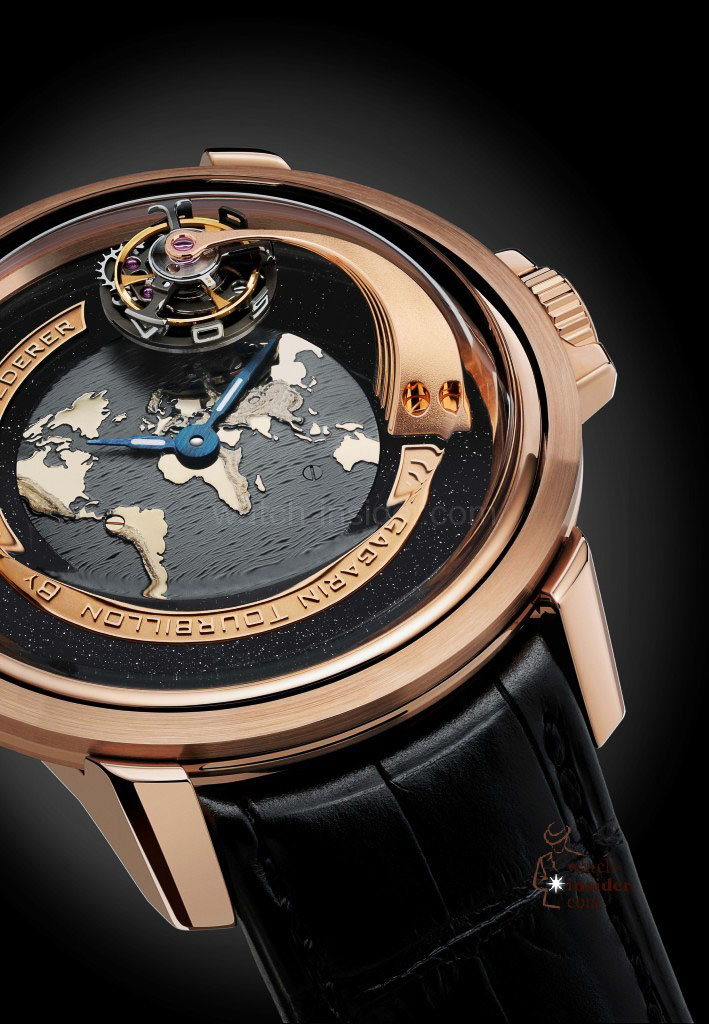 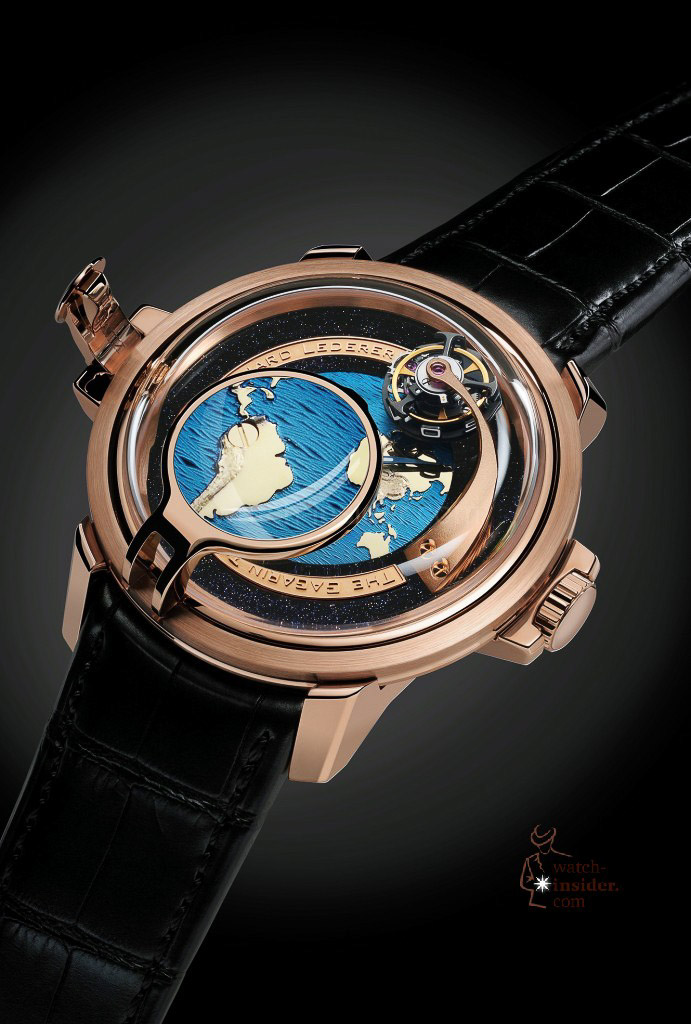 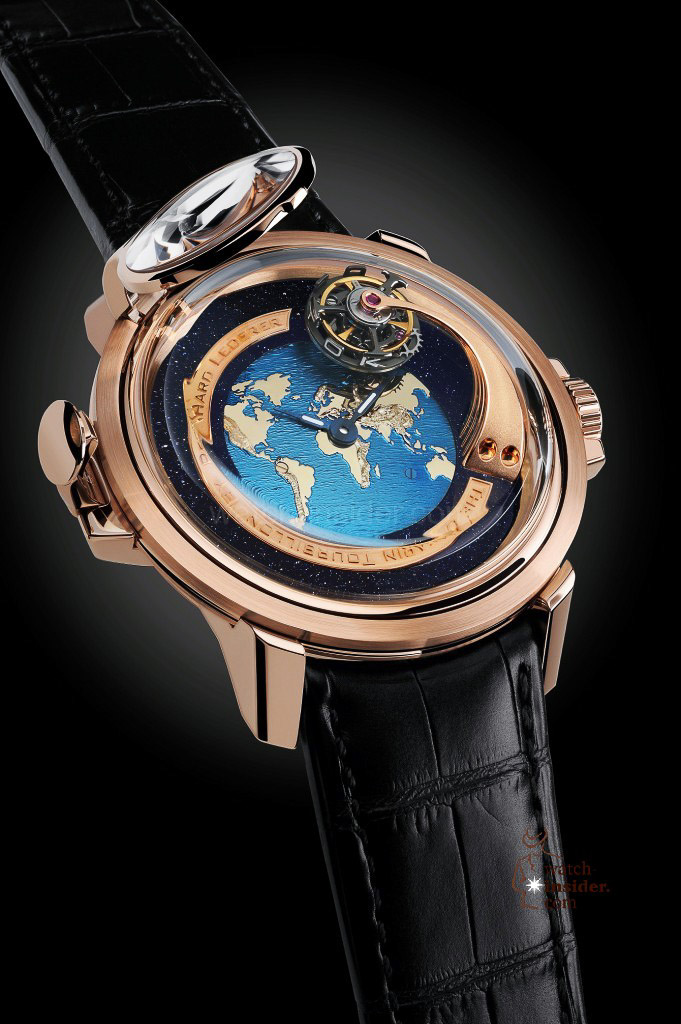 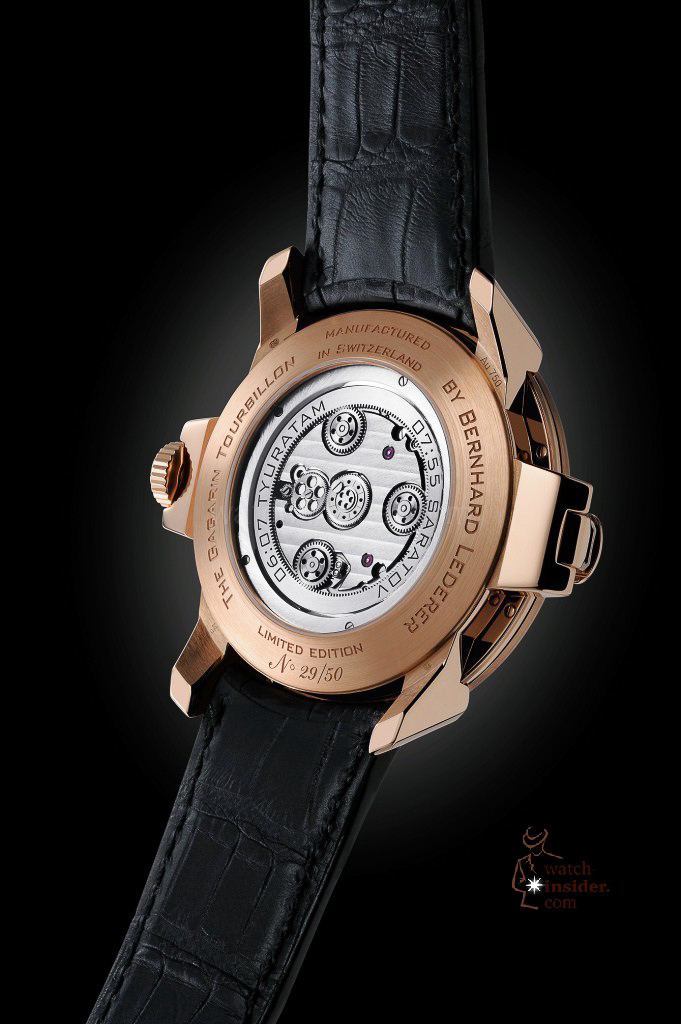 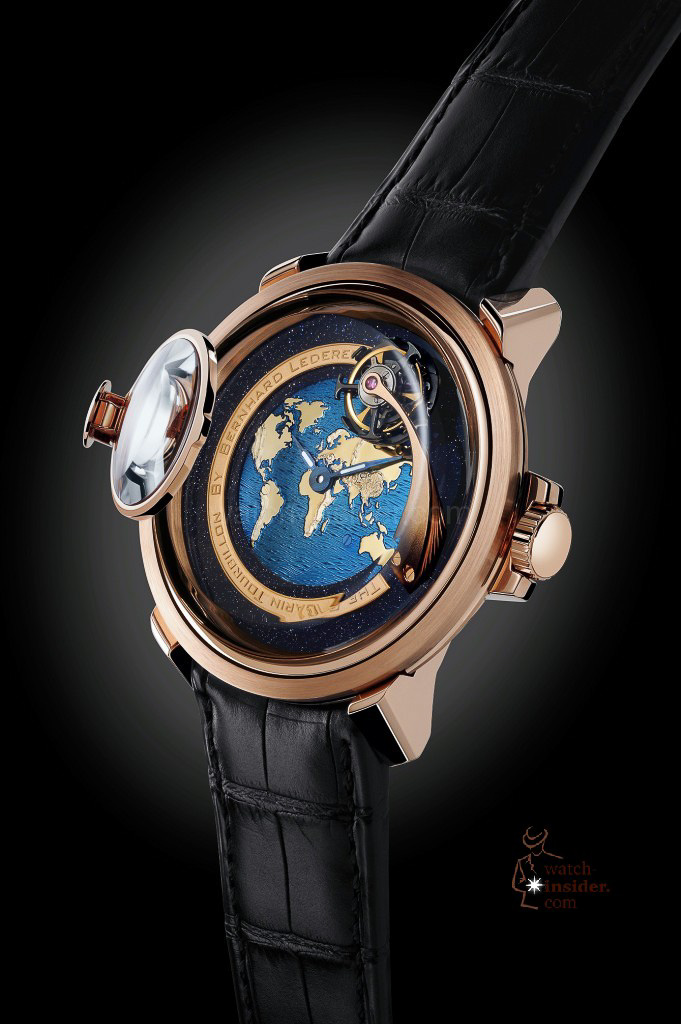 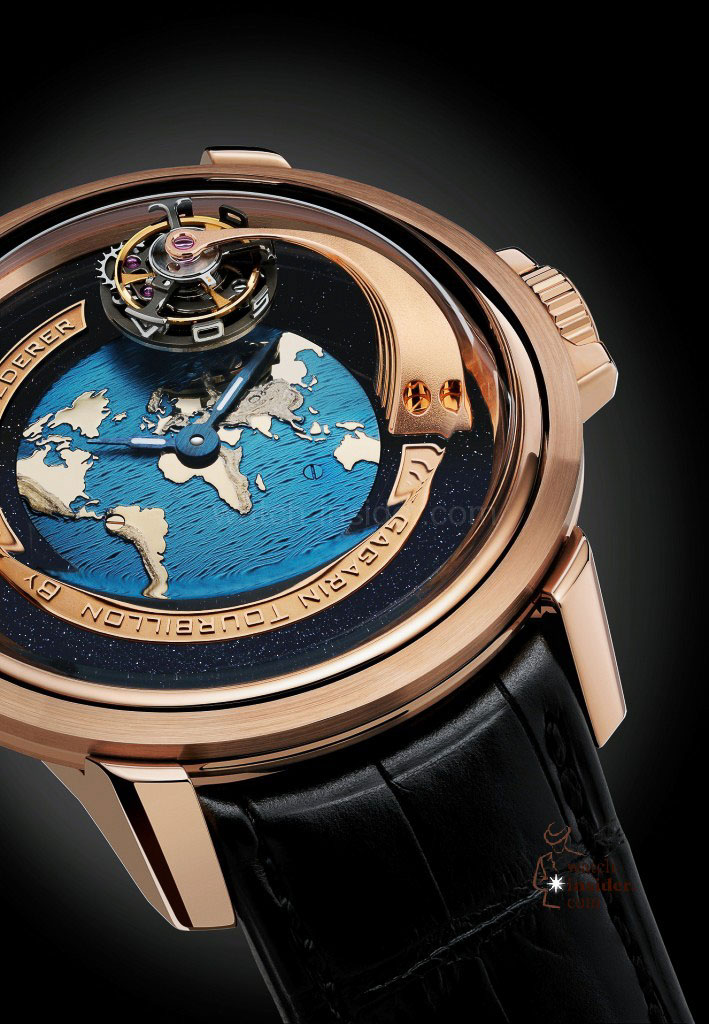 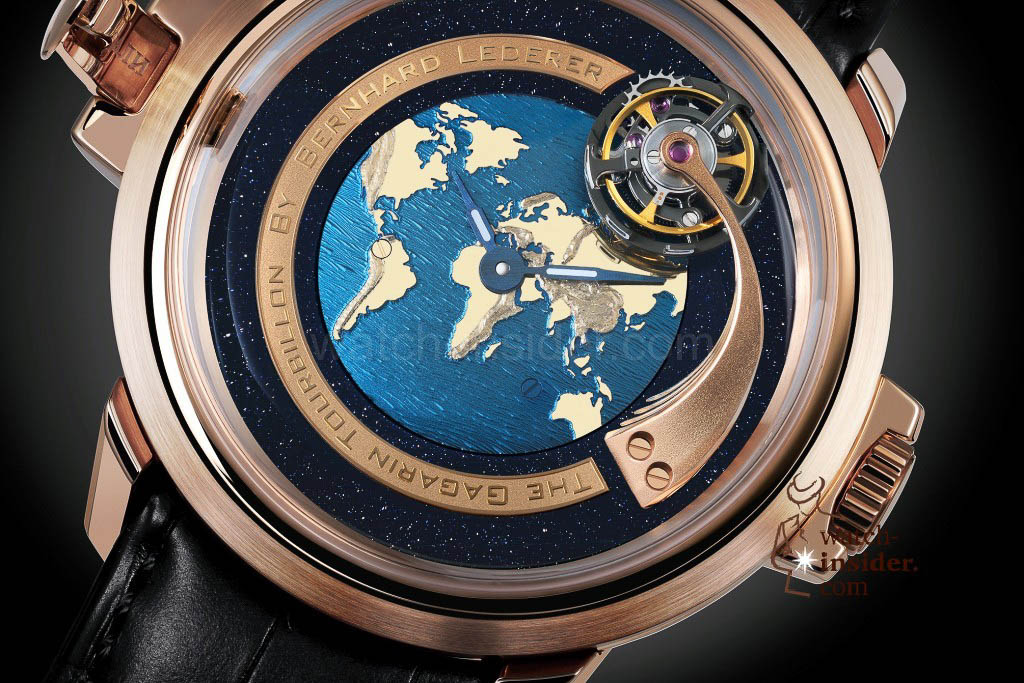 Tourbillon cage: In titanium and forming the word “VOSTOK”

Guys, this is a very unique watch! In fact to really appreciate the horological work of Bernhard Lederer you probably should be interested in the history of discovering the space by humans and/or the history of Russian space travel and/or space travel in general.

I just asked Bernhard Lederer who buys these watches and he told me: “Of course Russians do, but also watch collectors and people being interested in space travel.”

Although the watch costs 260.000 CHF including 8 % VAT he has an actual waiting list of 8 pieces.

I personally very much like the idea and the execution done by Bernhard Lederer. To be honest I have seen many more crazy objects that all are competing for the highly coveted place on the wrist of a potential client.

Written By
Alexander Linz
More from Alexander Linz
Omega provided me the documentary “Every Split Second Counts” by John Dower. It...
Read More