Nick Hayek is conducting the biggest Swiss horological orchestra with 29.600 employees and a turnover in 2013 of 8.143 billion Swiss Francs. I invite you to listen to our conversation taped yesterday at the Swatch Group HQ.

I have been to the Swatch Group headquarters in Biel in Switzerland yesterday. Now back in the office I just uploaded my conversation with Nick Hayek for you. I have to tell you it was a long conversation. It´s 45 minutes of real inside talk about the Swatch Group and the Swiss Watch Industry and we could have talked even longer.

The 45 exclusive minutes I am offering you are thrilling.

Nick Hayek gives some real insides, talks about new developments in and investments of the Swatch group, he gives some insides about the Swatch “Sistem 51”, he makes a world first announcement for a future development for Swatch, he describes the developments in and the importance of the so called entry and mid price ranges, he gives an interesting outlook for Omega and he analyzes the wellbeing of the Swiss Watch Industry. And he jokes around with me, showing me again that he has a real good sense for humor and that he is everything else then a bore. Also the pictures I took yesterday do proof this 🙂

It´s not simple to meet Nick Hayek and occasions like this are quite rare, since the CEO is always very busy. I know Nick Hayek for many years now. We first met when he first started to work for Swatch (not to be mistaken with Swatch Group) and became the Swatch CEO.

Let me first give you some facts and figures about the Swatch Group:

These watch and jewelry brands belong to the Swatch Group

Interesting and impressing, isn’t it?

I do now invite you to listen to my conversation with Nick Hayek, taped yesterday in Biel at the Swatch Group headquarters. Take some time, sit down, relax and enjoy!

Nick Hayek in his office yesterday …

These were the two watches Nick Hayek was wearing yesterday: Omega and Swatch 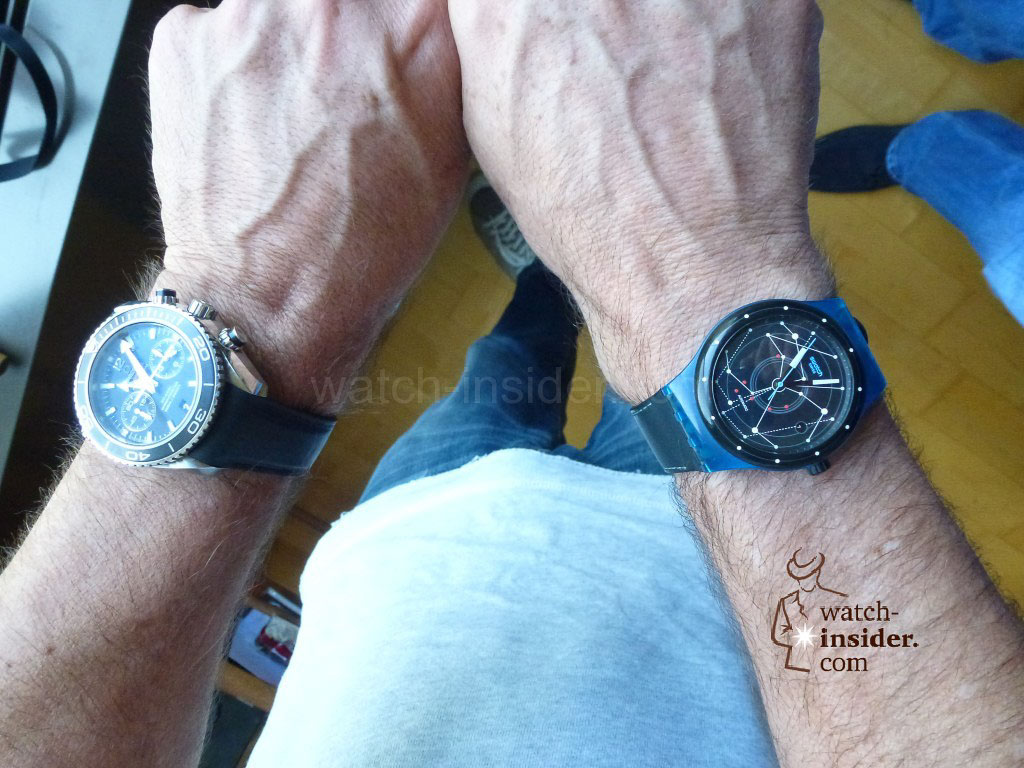 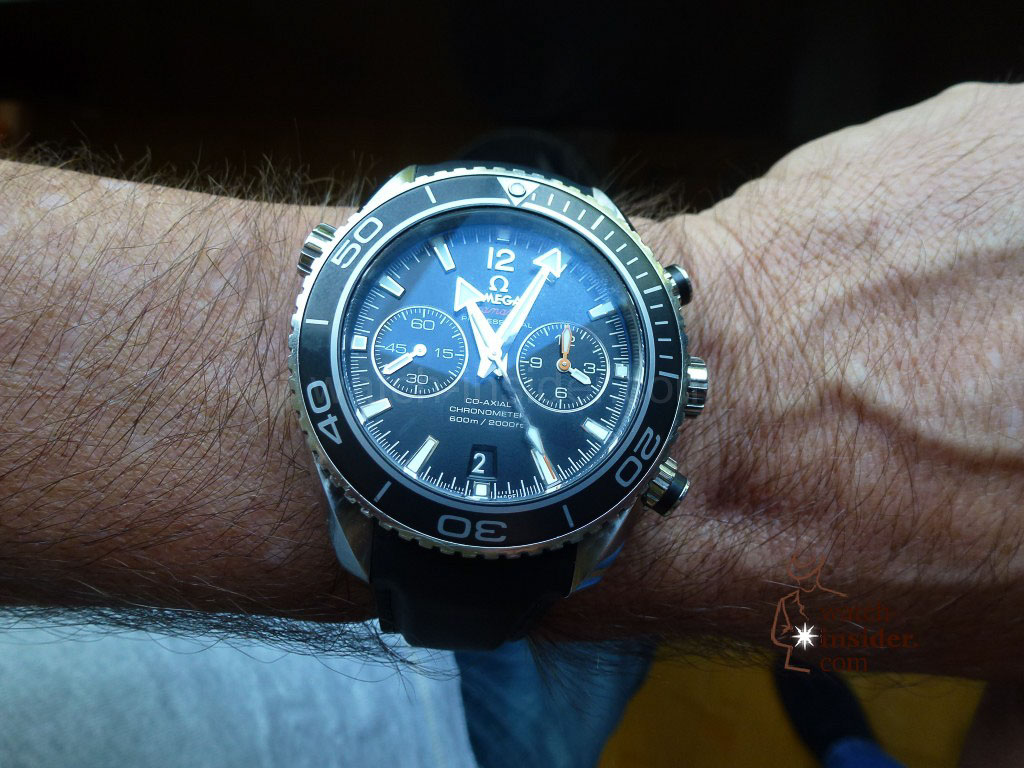 Swatch Sistem 51, the brand new, revolutionary, automatic Swatch that will come to the markets end of the year 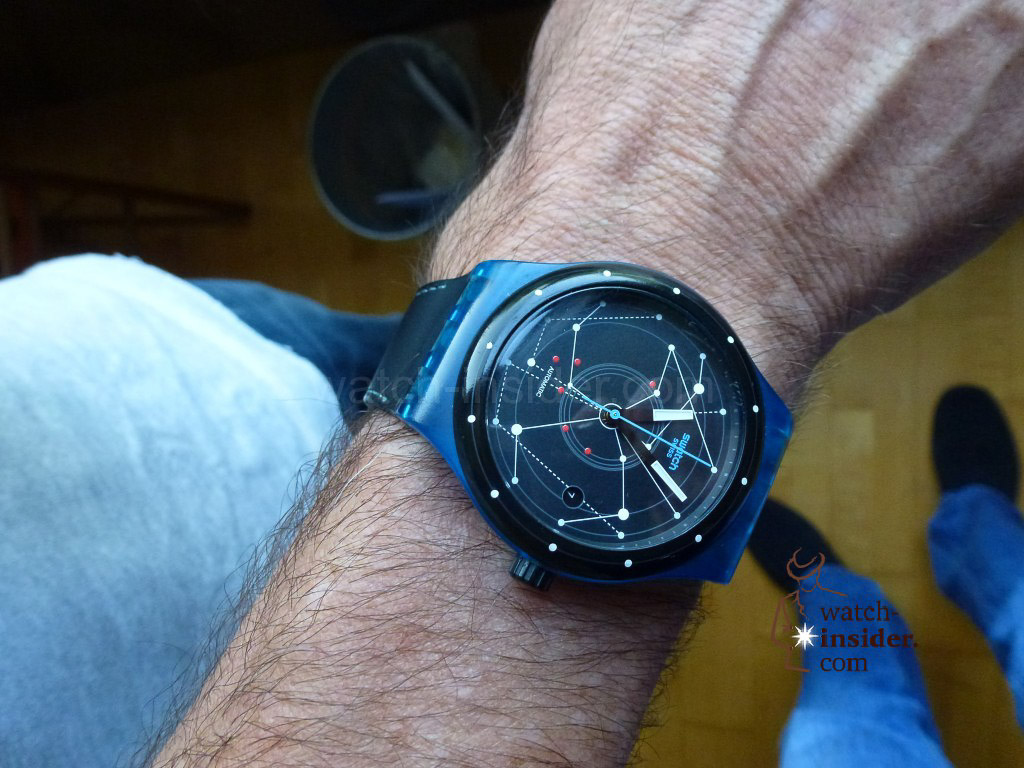 Nick Hayek “shouting” at me. And please look what´s written on my T-shirt … 🙂

Look exactly what you see behind Nick Hayek´s head. It´s a Santa Claus´ hat. So if people sit at the table exactly under the drawn hat, they will always look a bit funny. Nick Hayek has a lot of charisma, but he also always good for a joke. 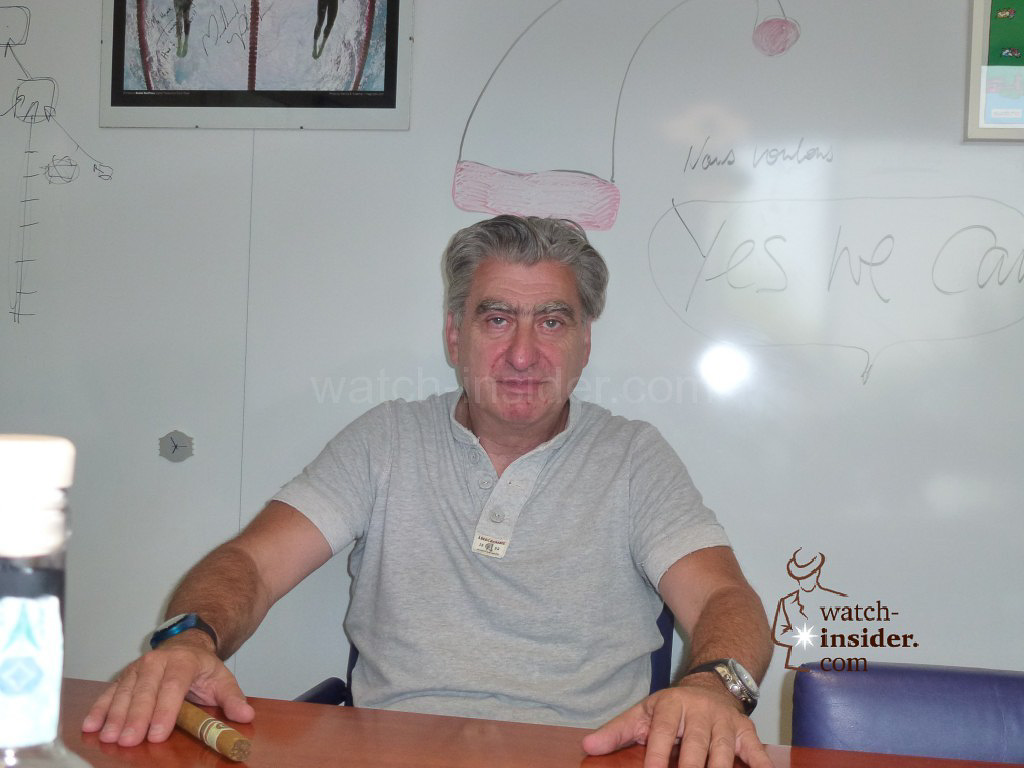 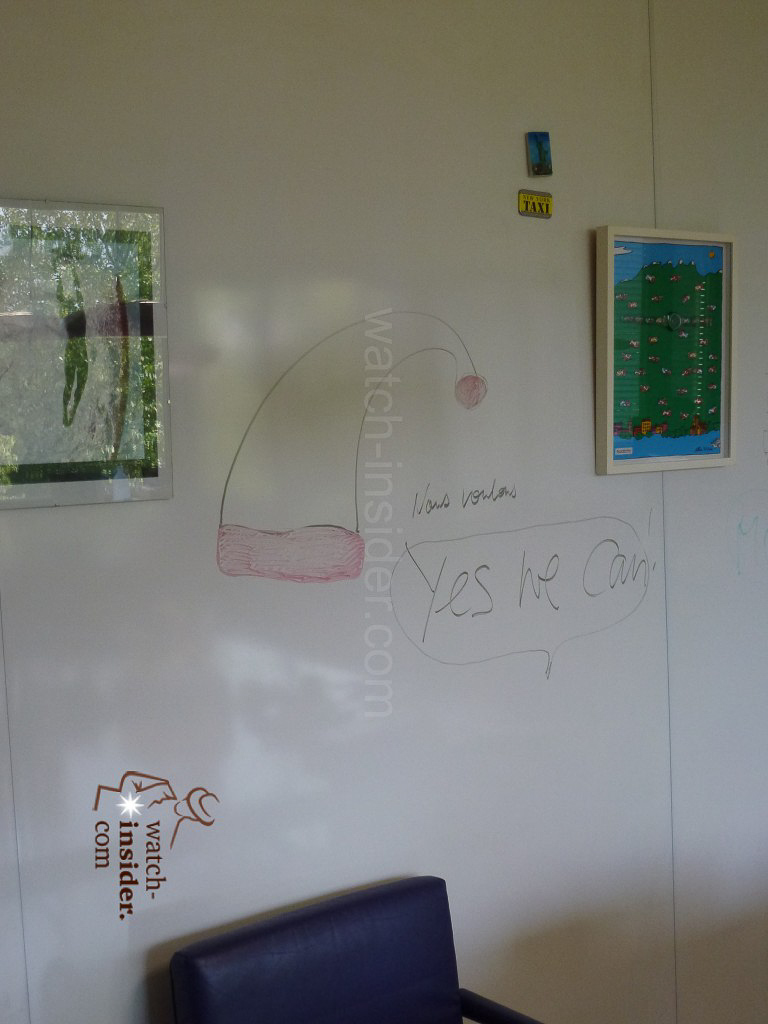 Nick Hayek in a ski bob smoking a cigar …

A young Nick Hayek at the Olympic Games

A warning just in front of Nick Hayek´s office

Nick Hayek, thank you once again for your time and the inspiring conversation!

And for those of you now being interested in even more details let me offer you this additional information:

The Swatch Group Ltd. is the number one manufacturer of finished watches in the world. The Group is active in the manufacture of finished watches, jewelry, and watch movements and components. It produces nearly all of the components necessary to manufacture the watches sold under its 19 watch brands and the multi-brand Tourbillon retail label, as well as the entire Swiss watchmaking industry. In addition, it operates its own worldwide network of distribution organizations. The Swatch Group is also a key player in the electronic systems sector.

The Swatch Group takes its name from the extraordinarily successful story of Swatch, one of the world’s most widely recognized consumer brand names. Less than 30 years ago, the Swiss watchmaking industry was battling a serious crisis. The first Swatch watches were released in 1983. The years since then have seen the recovery of the Swiss watchmaking industry as a whole, and the establishment of The Swatch Group as a strong, diversified industrial holding. This solid foundation has allowed the Group to broaden its reach and extend its range of brands. Today, the Swatch Group offers watches in all price categories, and Swatch Group monobrands and the multibrand Tourbillon retail mark hold leadership positions in all market segments:

• Longines, Rado and Union Glashütte in the high range

• Tourbillon, the retail mark under which all selected Swatch Group watch and jewelry brands of the Prestige and Luxury range, as well as Swatch products are offered in a unique and exclusive multi- brand environment.

• Hour Passion, the retail boutique that offers all Swatch Group brands of the high and middle ranges down to the basic segment in a distinctive, high-class multi-brand environment

Today, the Swatch Group and its brands continue to invest heavily in research and development, driving the steady expansion of their leading position in materials and process technologies and in product design and manufacturing. In particular, the Swatch Group engages in significant development activities in microelectronics and micromechanics. The Group is also active in the field of service sectors. Sports timing and measurement technologies, although not a core business, play a key role in terms of brand and Group visibility. A strong number of Swatch Group companies serve as official timekeepers at a variety of international sports events, including the Olympic Games.

Under the leadership of Nicolas G. Hayek, the Swatch Group achieved worldwide renown as the crown jewel of the watchmaking industry. In the early 1980s, Mr. Hayek led the firm’s recovery from a severe crisis. His decisive leadership was critical to the launch of the Swatch watch in 1983 and subsequently drove the continuous development and improvement of all Swatch Group brands. His innovative strategies also served as important models for the Swiss watchmaking industry as a whole and played a key role in the revival of the industry. The achievements of N.G. Hayek have been widely recognized in Switzerlandand beyond, resulting in a number of notable awards, including that of Doctor honoris causa, awarded by the Universities of Neuchâtel and Bologna in 1998. In 2003, he was named Officier de la Légion d’Honneur de France. Nicolas G. Hayek was Chairman and Delegate of the Board of Directors of The Swatch Group Ltd from 1986 to 2010.

In 1998, SMH (Swiss Corporation for Microelectronics and Watchmaking Industries Ltd.), founded by Nicolas G. Hayek in 1983 through the merger Swiss watchmakers ASUAG and SSIH, was renamed The Swatch Group. At the time, both SSIH and ASUAG held a number of well- established Swiss watch brands. ASUAG had been founded in 1931, SSIH a year earlier through the amalgamation of Omega and Tissot. SSIH’s principal objective was to market quality Swiss watches. By taking over companies that produced high-quality movements and a number of lower-end watch brands, SSIH gradually managed to establish a strong position as a Swiss watch manufacturer. ASUAG’s mandate was to maintain, improve and develop the Swiss watch industry. ASUAG also expanded gradually through the purchase of companies that made movement-blanks and a number of finished watch manufacturers that were subsequently brought together under the subsidiary GWC General Watch Co. Ltd.

In the 1930s, both ASUAG and SSIH sought to combat the severe economic crisis and ensuing unemployment by means of complementary research and development programs in their respective companies. It proved difficult for both, however, to implement a common industrial policy for the subsidiaries concerned. Following repeated crises in the Swiss watch industry, by the 1970s both ASUAG and SSIH were once again in trouble. Foreign competition, in particular the Japanese watch industry, with its mass production of cheap new electronic products and new technology, was rapidly establishing a strong foothold in the market. Eventually, both ASUAG and SSIH faced liquidation, and foreign competitors were offering to buy prestigious brands such as Omega, Longines, Tissot, and others.

At this point, Nicolas G. Hayek, at the time Chief Executive Officer of Hayek Engineering, received an assignment to develop a strategy for the future of both companies. In 1983, the soon to be renowned Hayek Study recommended a number of measures designed to enable the survival and ultimate recovery of the companies. Critical steps included the merger of ASUAG and SSIH into SMH and the launching of a low- cost, high-tech, artistic and emotional «second watch» – the Swatch. The subsequent implementation of the measures recommended by the Hayek Study, together with the take-over of the majority of shares by the Hayek Pool and the nomination of Nicolas G. Hayek as CEO, successfully created new opportunities and established a new culture. Within five years, the SMH Group was to become the most valuable watchmaker in the world.

In the years ahead, the core business of the world’s largest manufacturer of finished watches will clearly remain in the watch industry. Swatch Group companies are constantly adding innovative new watches to the brand product lines, inspired by the grand traditions of Swiss quality and craftsmanship and made possible by the enormous resources the Group brings to bear through its technology research and development teams.

The successful introduction of jewelry products by selected brands has established a basis for a growing presence in this sector. A range of Group companies supply movements and components not only to Swatch Group brands, but to the entire Swiss watch industry and to selected watchmakers outside Switzerland.

The Swatch Group also continues to develop high-tech components for the computer, telecommunications, medical applications, automotive and electronics industries. Swatch has taken advantage of the Group’s vast experience, know-how and production capacities in micromechanics and microelectronics to develop its activities in the sector of the mechanical watch (Sistem51) but is also active in the telecommunications and internet sectors, where Swatch Access (wireless access control, internet access, e-commerce) is but one example of the brand’s remarkable ability to transform advanced technology into successful products.

At the top end of the market, The Swatch Group will further reinforce its presence in the Prestige and Luxury segment with a growing number of mono-brand outlets for Breguet, Blancpain, Glashütte Original, Jaquet Droz, Léon Hatot, Omega, Longines, Rado and Swatch. The multi-brand boutiques under the high-end «Tourbillon» label and the “Hour Passion” boutiques are proving increasingly successful. The Tourbillon brand boutiques offer all Swatch Group luxury brands products – watches and jewelry collections; the Hour Passion stores carry the products from the high, middle and basic ranges – highlighting each brand’s appeal in specially designed environments.

Written By
Alexander Linz
More from Alexander Linz
When you listen to my conversation with Jean-Christophe Babin don’t expect jewellry...
Read More

37 replies on “In conversation with Nick Hayek, CEO Swatch Group”