Timepieces by A. Lange & Söhne are characterized not only by timeless elegance but also by their striking recognisability. Debut model sketches provide insights into the work of the Lange designers.

Gerrit Rietveld, an eminent 20th-century designer and architect, argued that construction and beauty need not be contradictory. For the same reason, A. Lange & Söhne’s product designers work closely with the caliber engineers right from the beginning when they develop new models. In an elaborate inception process, they must reconcile the grand idea with scores of seemingly insignificant details. The objective is to harmonize technology and aesthetics, tradition and modernity.

From the first rough sketches to final acceptance, the design of a dial alone can take up to two years. For Lange designers, repeatedly questioning the validity of their own drafts is part of the job. On the long, arduous path to the final version, they assess countless variations that often differ from one another only in diminutive details. They are appraised, compared, passionately discussed, and reworked yet again. But grappling with fractions of a millimeter is the only way to come up with the best solution among many good ones. The result: watches with designs that remain influential for decades and which can be readily recognized as “an A. Lange & Söhne” even without the famous arced brand signature.

In the GRAND LANGE 1, the off-center configuration of the displays follows the principle of the golden section. 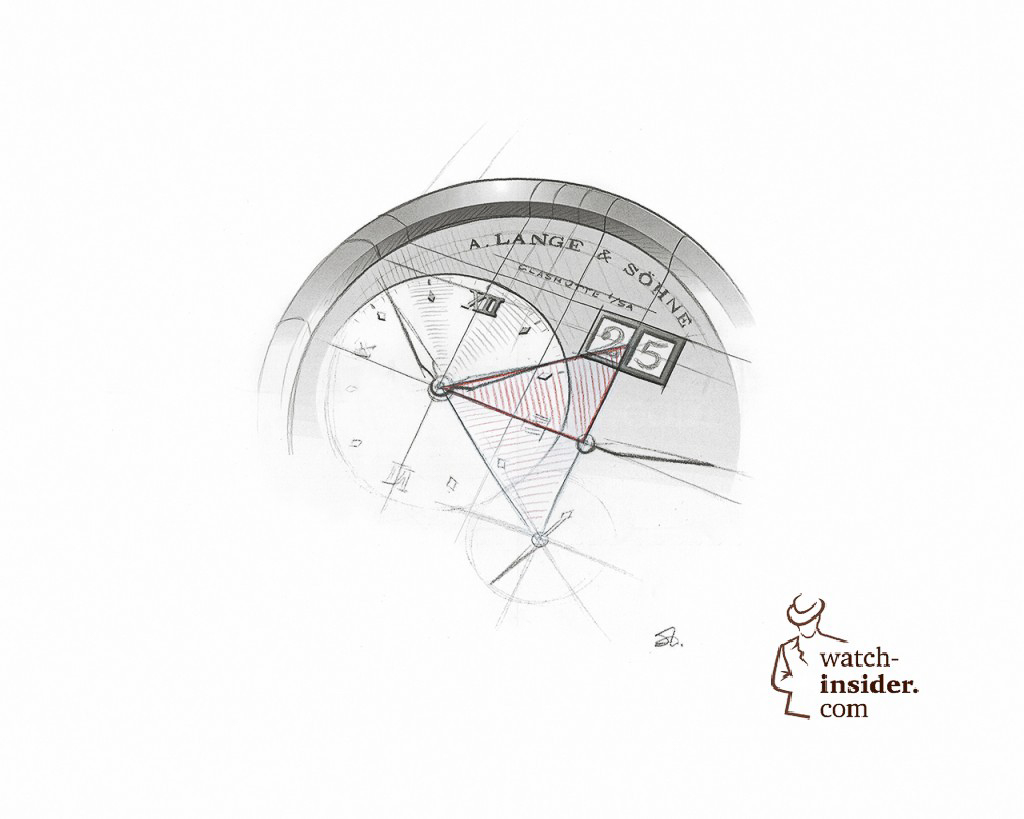 Prominent design elements such as the asymmetric dial layout and the outsize date with a double aperture transformed the Lange 1 – first introduced in 1994 – into a style-defining icon. It is no doubt the most famous model of the venerable Saxon brand. With its double-aperture date inspired by the stage clock in the Semper Opera House and the off-center dial architecture, the Lange 1 wrote design history. The non-overlapping arrangement of the displays reflects the harmonious proportions of the golden ratio. Since antiquity, it has been considered a paragon of aesthetic equilibrium.

Apart from the obvious ones, the distinctiveness of timepieces crafted by the Saxon manufactory is often based on very subtle features. Such details include the gracefully sculpted lugs, the elegant lancet-shaped hands, the engraved look of the typography, or the interplay between the case material and the dial color, which is balanced explicitly in the interest of aesthetic appeal.

Featuring debuts for the year 2013, a few sketches from the A. Lange & Söhne designers illustrate how the manufactory repeatedly succeeds in melding the quest for emblematic timelessness and brand recognition.

The latest model of the Grand Lange 1 owes its expressive face to the contrast between the black solid-silver dial and the graceful white-gold case. Thanks to luminous hands and appliques in rhodiumed gold, the time and power-reserve readings are highly legible even in the dark. The focus on its black-white polarity is heightened by a black crocodile strap and a Lange prong buckle in solid white gold. 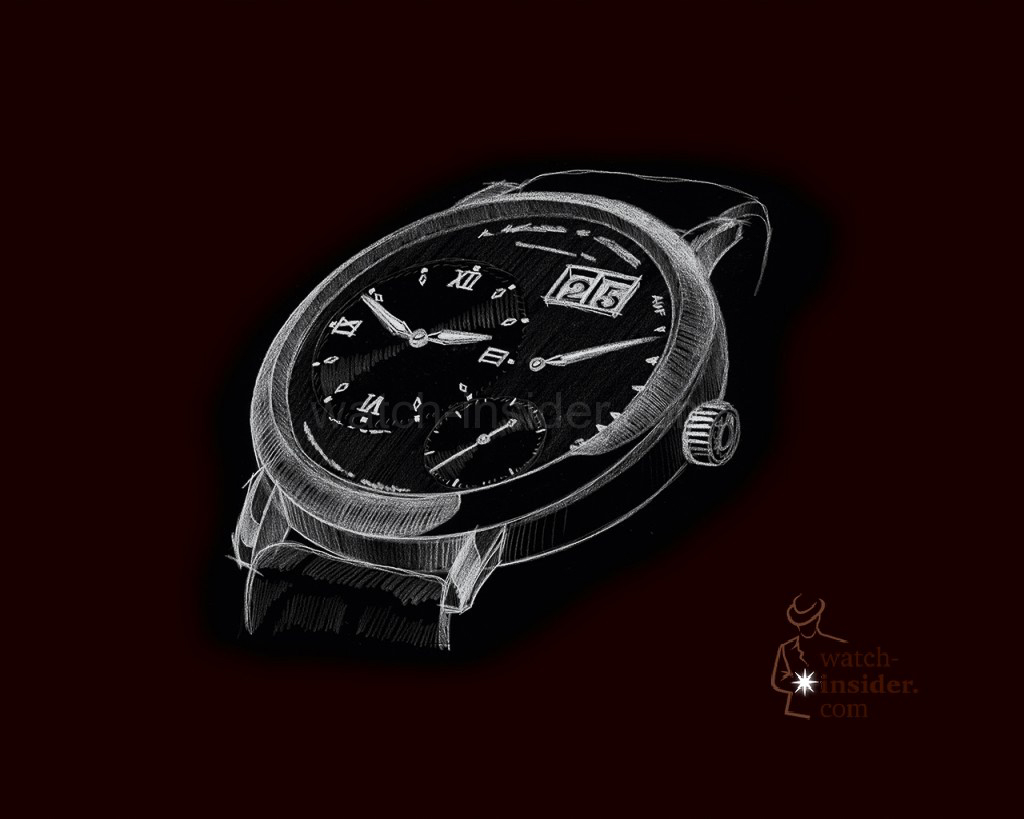 For nearly 20 years, the secret of the revolutionary Lange outsize date remained concealed beneath a solid-silver dial. For the first time ever, the Grand Lange 1 “Lumen” exposes the complex mechanism. The discs of the first luminous outsize date are now visible through semi-transparent sapphire-crystal dial segments. To optimize the luminosity of the date display after the switching cycle around midnight, a transparent units ring with black numerals rotates over a glowing background rectangle. As befits the exclusivity of the technical and design prowess that it embodies, the Grand Lange 1 “Lumen” comes in an edition limited to 200 platinum-cased watches. 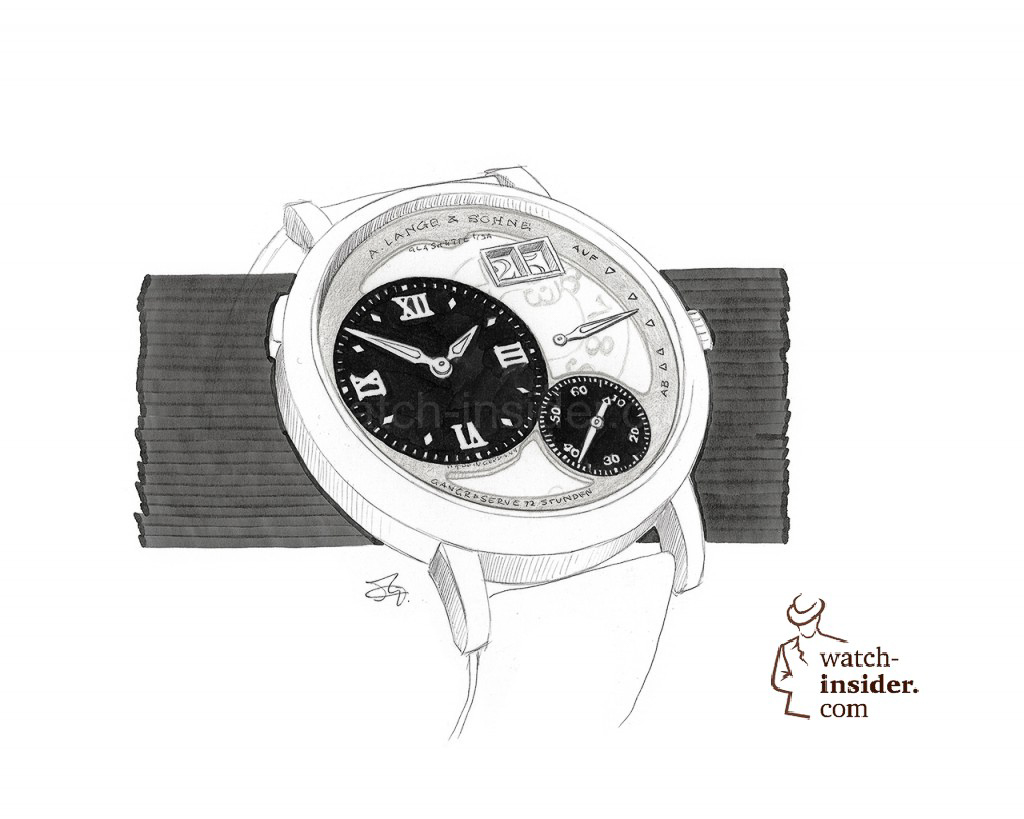 1815 UP/DOWN: Reminiscence of the pocket watch

The models of the 1815 watch family project sleek dignity at the pinnacle of watchmaking artistry. In the new 1815 Up/Down, a separate dial at 8 o’clock indicates how much of the 72-hour power reserve remains available. The geometry of the indicator with the inscriptions “AUF” for fully wound and “AB” for fully unwound is an A. Lange & Söhne tradition. Arabic numerals, blued-steel hands, a railway-track minute scale, and symmetrically arranged subsidiary dials for the power-reserve indicator and the running seconds are reminiscent of the principles that governed the design of Lange’s famous pocket watches. 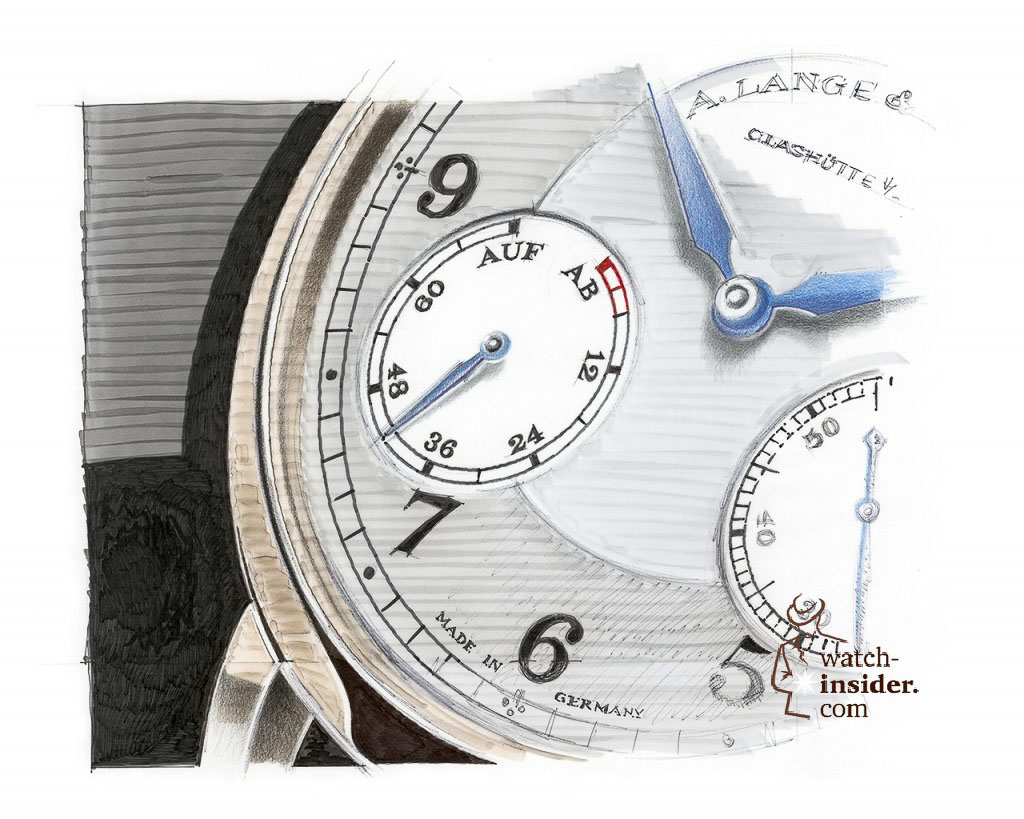 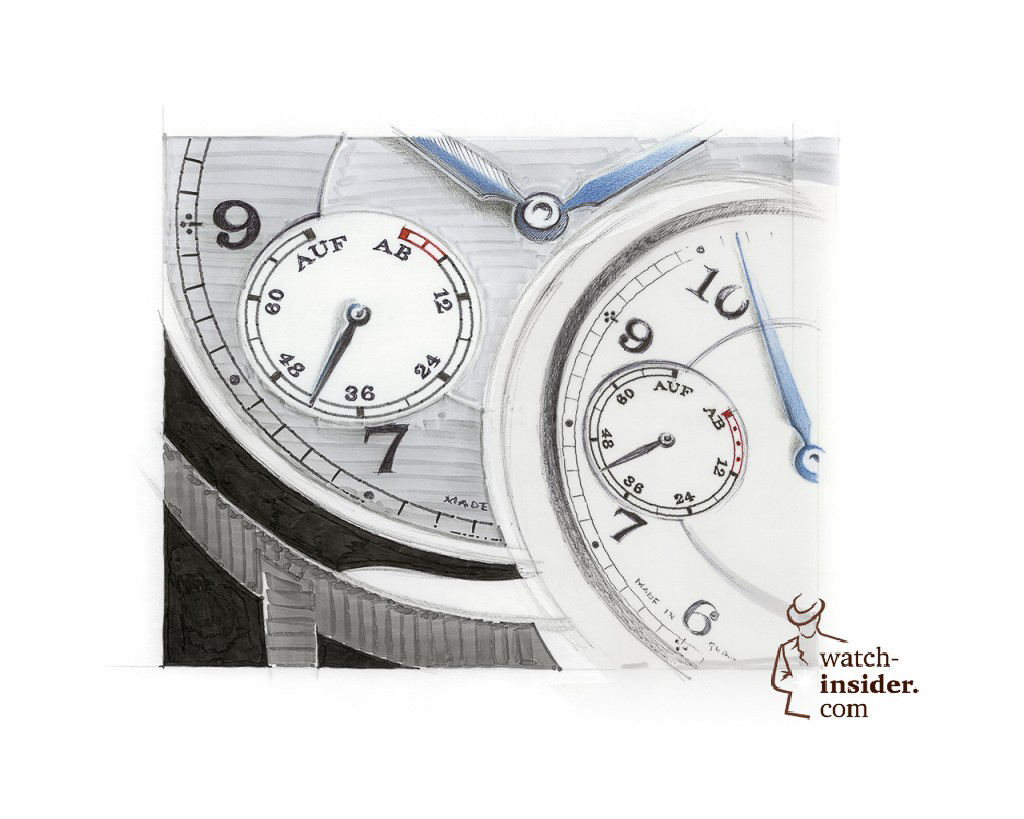 The development of the Saxonia Annual Calendar was driven by the desire to achieve clarity and harmony in the arrangement of its many displays. With its baton-style hour markers, the puristic minute scale, and symmetrically arranged calendar indications, the dial is articulate and well organized. Accents include the brand-typical lancet hands and the perfectly legible Lange outsize date in the characteristic double aperture. The concept is rooted in a modern design principle that derives aesthetic appeal from functionality and visual eloquence. The version presented this year, in a coolly lustrous platinum case with a rhodié-coloured dial, emphasizes the design trilogy that unites purity, clarity, and beauty. 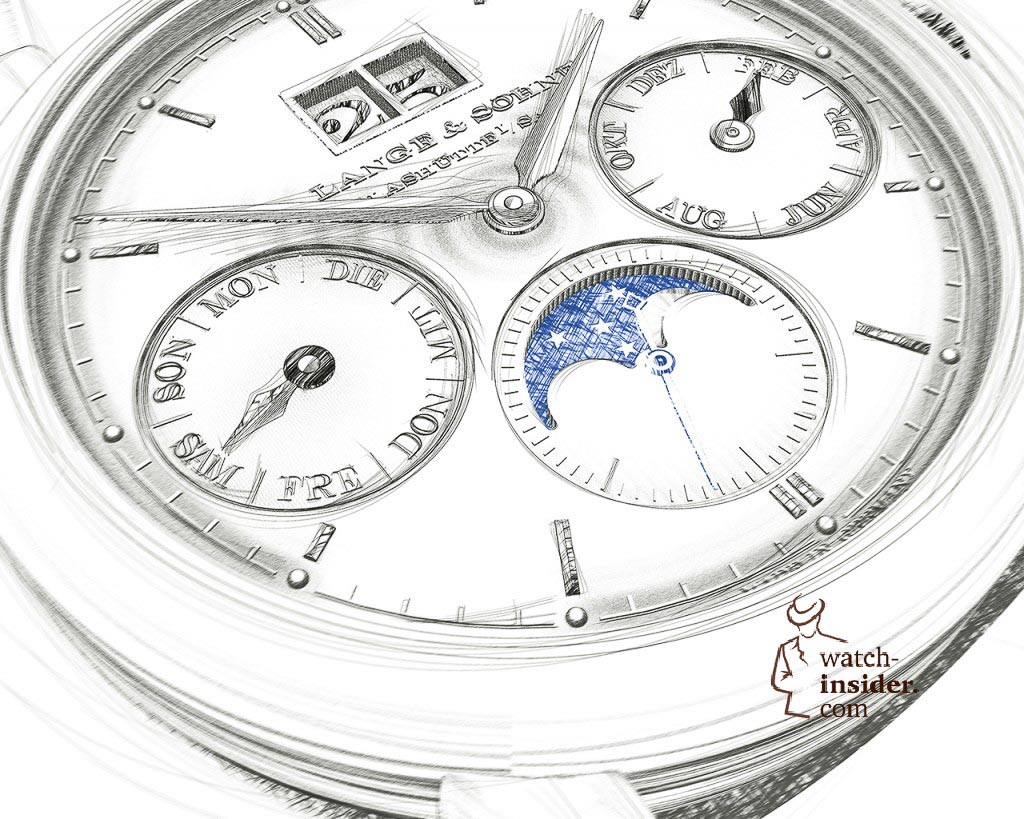 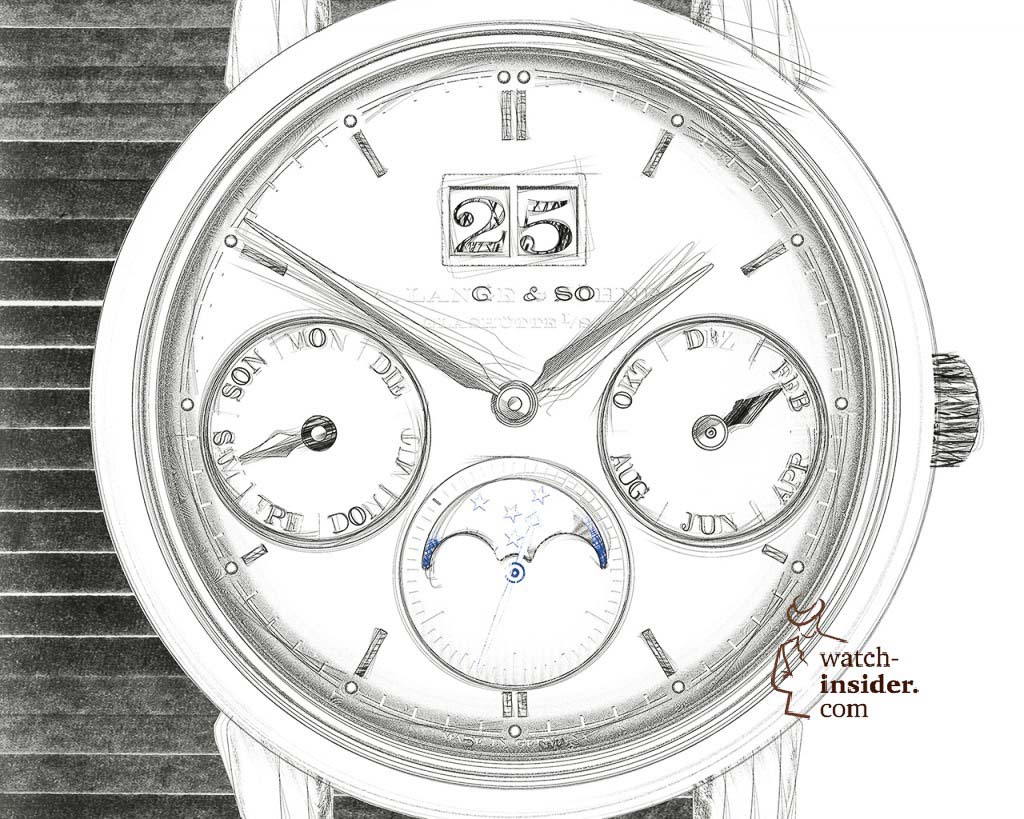 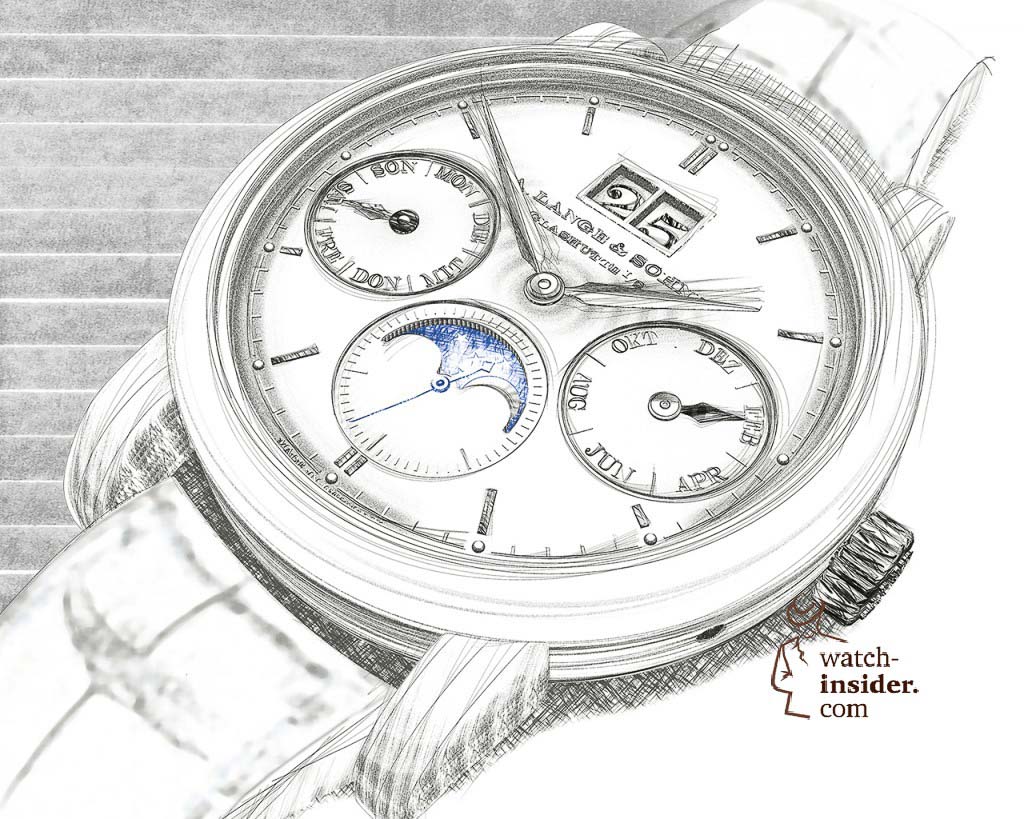 A. Lange & Söhne timepieces combine the best of two worlds: genuine artisanship and timeless elegance. Ennobled with 76 brilliant-cut diamonds, the new Saxonia Automatic was developed with the ambition to create a perfect symbiosis of technology, craftsmanship, and design. The solid-silver dial, framed by a diamond-set bezel, perfectly complements the slender silhouette of the case in solid white or pink gold. With a height of merely 3.7 millimeters, the L086.1 self-winding movement is the Saxon manufactory’s thinnest caliber. 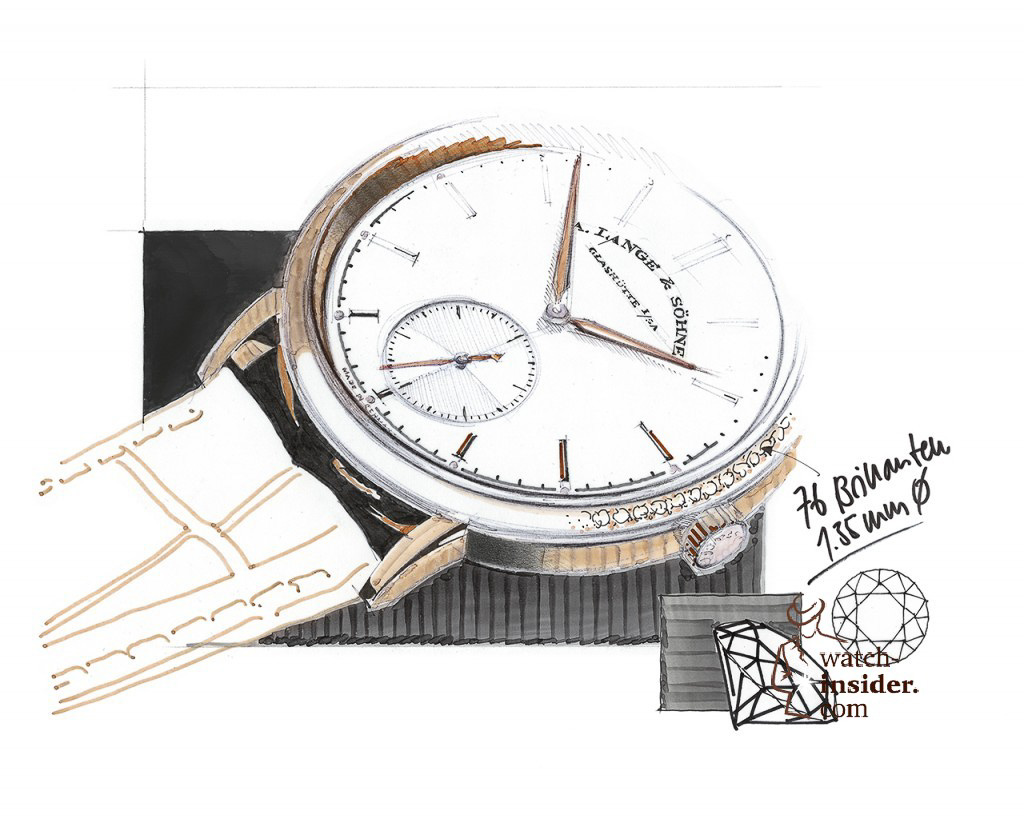 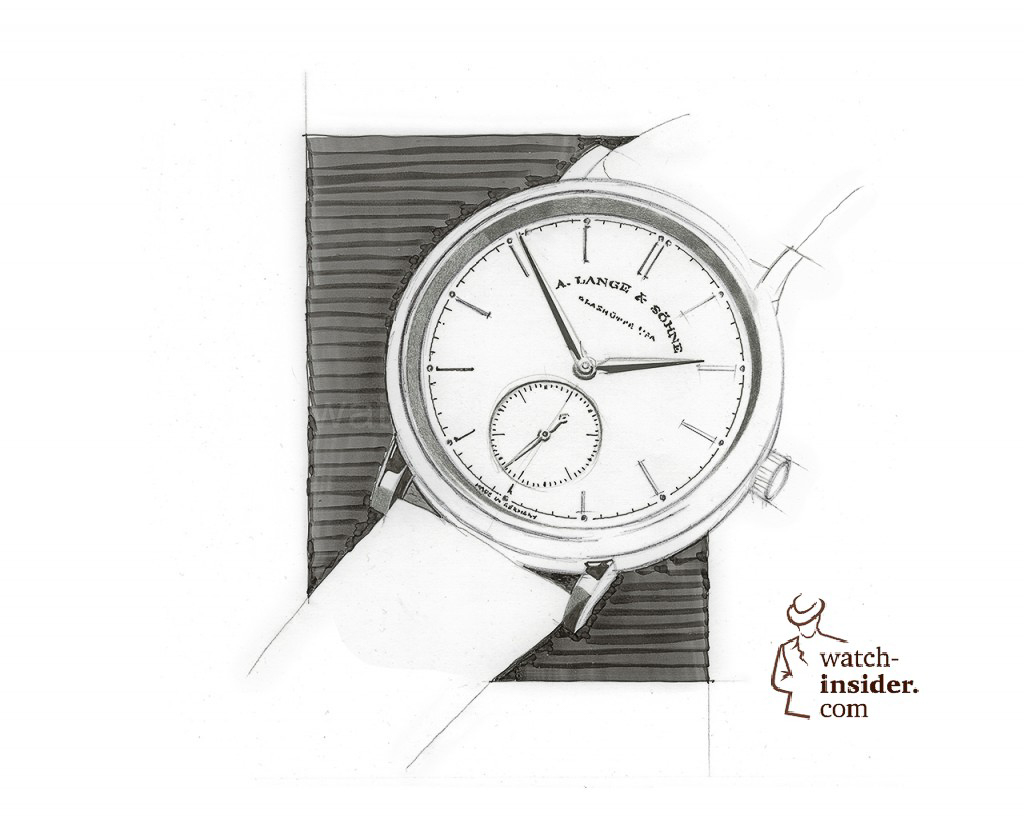 Written By
Alexander Linz
More from Alexander Linz
These are two new chronographs from Breitling. The aviation enthusiasts among us will...
Read More

7 replies on “What is a Golden Section and a Double Aperture? I invite you to discover the A. Lange & Söhne Design Principles”