This is a watchmaking revolution! While Omega is already gearing up for industrial-scale production of this technology, most of its competitors are still half asleep.

Magnetic fields are present everywhere these days and have by now become Enemy Number 1 of the mechanical watch. The wristwatch has got over many teething troubles. Dust-proofing and water-resistance are no longer issues, nor is oil that hardens too fast, entailing short servicing intervals. Knocks and jars of all kinds scarcely disturb a modern watch movement any more than high or low temperatures. What remains is these invisible fields that are all around us and are increasing almost every day. Indeed, magnetic fields are omnipresent! Generators of magnetic fields that represent a threat to wristwatches include the invisible fasteners of handbags, accessories and various fitments, electronic gadgets, kitchen equipment, telephones, cordless phones, smartphones, tablets, laptops, computers, radios, loudspeakers, cars, airport security-check devices and much more. For example, if you use an iPad with the original Apple Smart Cover, you are dealing with over 30 magnets altogether. There are more than twenty of them in the Smart Cover, and ten more in the iPad itself. Simple everyday use of an iPad brings your wristwatch into continual proximity with powerful magnetic fields.

You may think that is laughable. I don’t!

Only a few weeks ago, the Bloomberg news agency reported that 8,000 of the world’s leading doctors and specialists attending a congress of the “Heart Rhythm Society” in Denver had warned of the dangers of the iPad. Patients with a cardiac pacemaker who laid the iPad down on their chests in bed, for example, suffered a stoppage of their pacemaker. Now even Apple is strongly advising anyone with a pacemaker to avoid holding the iPad too close, and to take special care not to go to sleep inadvertently with their iPad lying on their chest.

What effects do magnetic fields have?

A mechanical watch contains hundreds of different components, and they all display different characteristics when exposed to a magnetic field. Some are unaffected: They are made of amagnetic materials. These materials also have no magnetic remanence: after being exposed to a magnetic field, they do not become little magnets themselves. However, many materials used in a watch movement are ferromagnetic in character, and these store magnetic energy and thus have magnetic remanence. Let us now imagine a potpourri of components, with different characteristics, repeatedly exposed to magnetic fields of various strengths over a period. A particularly sensitive part is the hair-thin balance spring. With each beat of the watch movement, it pulls the balance wheel back, ensuring perfect, harmonious oscillation behavior. This generates the rhythm for the gear train, dividing up the continuous force supplied by the spring barrel into seconds, minutes and hours. As long as a balance spring is allowed to oscillate without interference, the rhythm is even and the watch will run accurately. The torque moments involved are unimaginably small, so that even the tiniest perturbation will cause discrepancies. Should the coils of the balance spring start to attract or repel each other, because they have become magnetized, the delicate play of forces in the balance mechanism will cease to be in equilibrium, and rate deviations will increase. In the most extreme case, individual coils of a hairspring can attract each other so strongly that they stick together. A complete coil of the balance spring would thus be bridged, severely reducing the effective length of the spring and causing the watch to run extremely fast. Sooner or later, the delicate mechanism of the watch movement, in which tiny torque moments interact throughout, will accumulate increasingly varied magnetic fields. At first, these will exert “only” a considerable influence on running accuracy but, as time goes by, they will inevitably reach the point where the tiny motor stops. In powerful magnetic fields, however, the movement will usually just stop at once and refuse to start again.

As a general rule, watches that do not stop under the influence of magnetic fields of given intensity and do not exceed rate deviations by more than a certain limit after exposure to magnetic fields may be described as “antimagnetic”, in accordance with DIN standards. According to standard DIN 8309, mechanical watches (of movement diameter larger than 20 mm) are considered to be antimagnetic if the rate deviation of the watch after exposure to a magnetic field of strength 4,800 A/m (corresponding to 6 mT) is no more than ± 30 seconds per day. Furthermore, the watch must not stop while under exposure to a magnetic field of this intensity. However, the value given in DIN 8309, set very low at 4,800 A/m, does not provide sufficient protection in practice.

The problem was identified very early on

When electric power took over our housekeeping, generating ever-increasing quantities of magnetic fields, many watchmakers wondered how far it would be possible to protect timepieces from them. As early as 1888, IWC, under the management of Johannes Vogel Muster, produced a 16- and 19-line non-magnetic watch movement for the Non-Magnetic Watch Company. To this end, the balance wheel, balance spring, escape wheel and pallet fork body were made from a palladium alloy, the fork from bronze and its arms from gold. Later on, protection against magnetism took on prime importance, especially for military applications. As the modernization of aircraft cockpits progressed, this too represented an increasing accumulation of magnetic field sources. For this reason, IWC developed a professional pilot’s watch for the German air force in the late 1930s, its 19-line center-seconds 52 T.S.C. caliber movement newly encased in a dial, movement holding ring and inner case back made of soft iron. The soft iron inner case produced by completely sheathing the movement in soft iron parts in this way would from then on be standard on IWC’s pilot’s watches and constitute a new standard for many watches with magnetic field protection.

Notably in the 1950s, a whole series of new watch models were presented, now targeting a new group of customers: engineers, technicians, chemists, pilots and doctors – all sorts of people who routinely had dealings with magnetic fields. The IWC “Ingenieur” was among them, as were the Omega “Railmaster” and also the Rolex “Milgauss”. The IWC featured a protection level of 80,000 A/m (= 1,000 gauss), the Omega resisted over 900 gauss and the Rolex 1,000 gauss. It was not by chance that all these professional watches were grouped around the 1,000-gauss level, as protection by a soft iron inner case reaches a ceiling in the neighborhood of 1,000 gauss or 80,000 A/m. Under the influence of a stronger magnetic field, this kind of Faraday cage becomes magnetically permeable.

Omega’s technology is a revolution

So it is not surprising that until recently there has been no genuinely better solution than a soft iron inner case. And this is still burdened with the drawback that it makes the movement casing quite thick, and prevents the manufacturer from making the movement visible through a sapphire crystal case back. Of course, the recent development and industrialization of the silicon balance spring has brought a significant improvement compared with balance springs made the traditional way, as silicon is well known as an amagnetic material.However, all the other ferromagnetic movement components described earlier still remained to be eliminated. In close and exemplary collaboration between Swatch Group engineers of ETA, ASULAB, Nivarox FAR and Omega, a new Omega caliber has now been created in which all the ferromagnetic components have been systematically replaced with amagnetic ones.

The basis used was the “8500” caliber with a coaxial escapement, a silicon Si14 balance spring and a titanium balance wheel. The new amagnetic caliber, certified by the Official Swiss Chronometer Testing Institute (COSC), is called the “8508”. Its balance wheel oscillates at 25,200 vibrations per hour, or 3.5 Hz, and it has a power reserve of 60 hours.

And now for the clincher: It can withstand magnetic fields of over 15,000 gauss! This is stated specifically on the dial. However, Omega has proved in repeated external tests conducted at great expense that the figure is actually considerably higher. There are even hushed whispers of as much as 30,000 gauss. That is no longer so easy to test, though, as a specialist organization has to be brought in for the purpose each time. In contrast, 15,000 gauss can be measured by the Swatch Group internally whenever necessary, so Omega guarantees this value as a minimum. 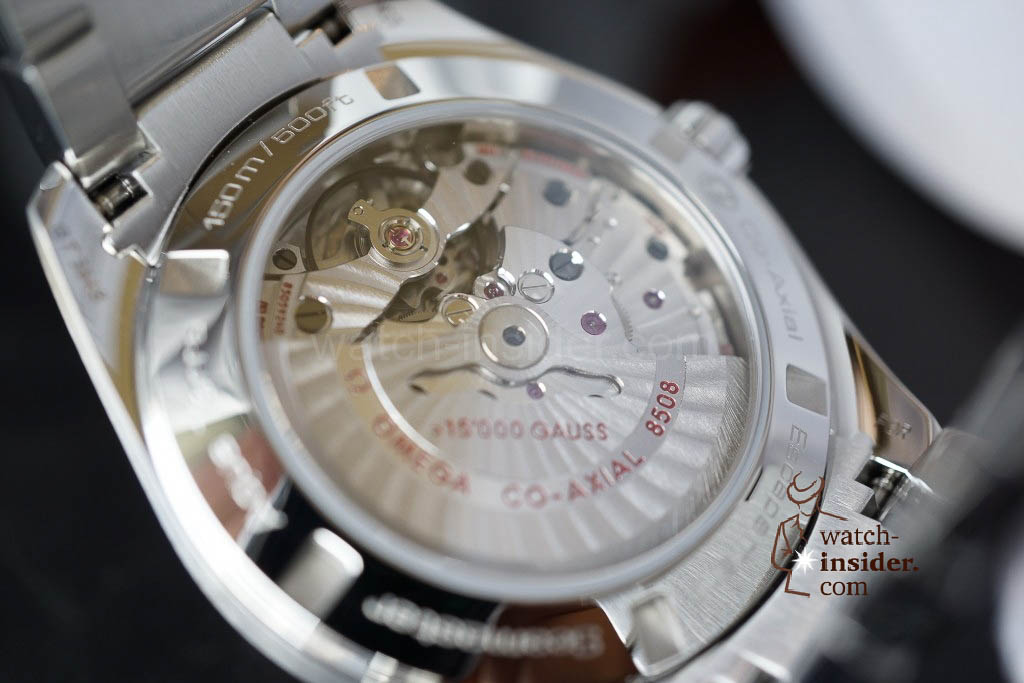 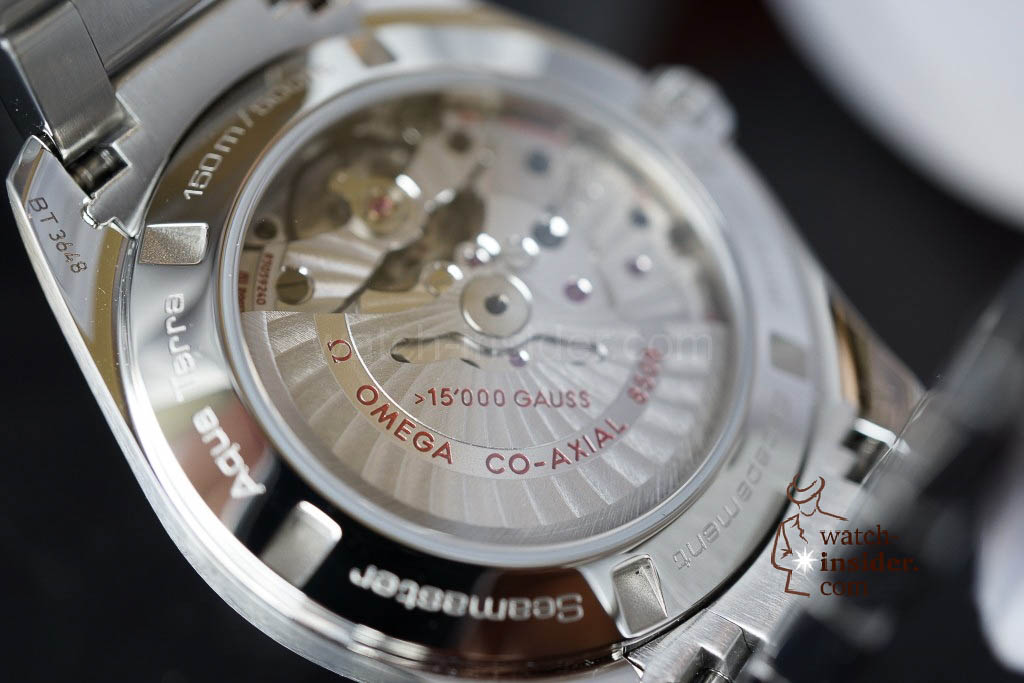 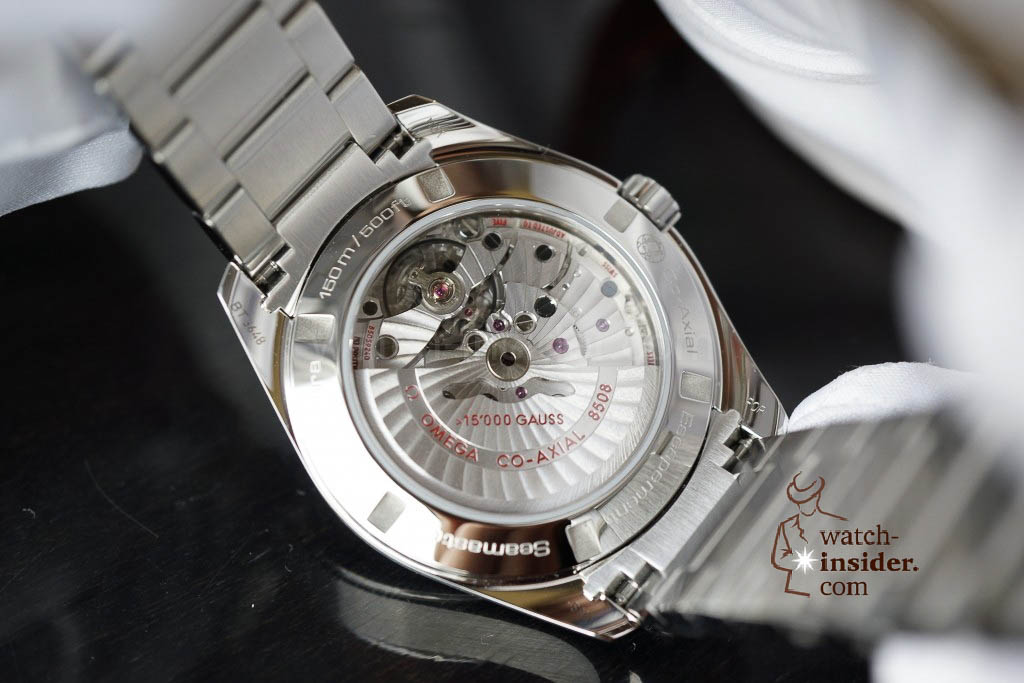 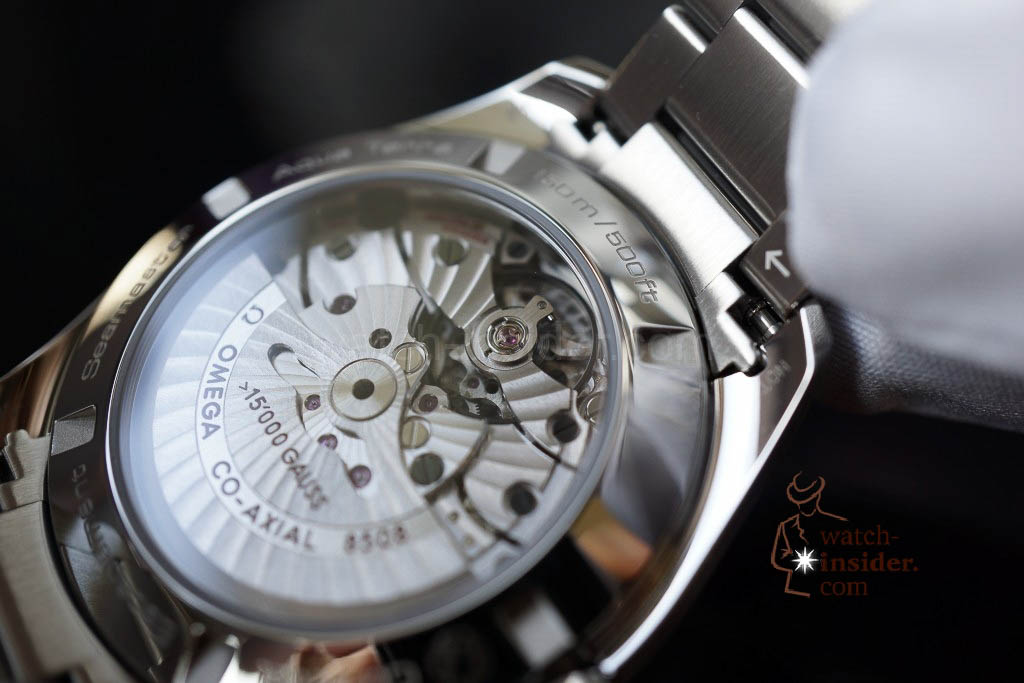 Let us not forget that 15,000 gauss is 15 times more than the IWC and Rolex models mentioned above can withstand. That is quite something! And when you know that in any case the actual Gauss number is considerably higher, there is little more to be said. Whatever you intend to do with your watch, it will accompany you unflinchingly, as the 41.5 mm special-steel case is also water-resistant to 150 meters.

Not a special model, but the beginning of large-scale manufacture

The real trump card is this: the new Omega “Seamaster Aqua Terra >15 000 Gauss” is NOT an artificially overpriced special model, and is not even a limited edition. It is simply the model that Omega considered worthy of the launch of this new technology. The price difference compared to the “Seamaster Aqua Terra” with the standard “8500” caliber, which is still a current model, is not even 1,000 euros. From now on, all Omega’s in-house movements will be modified and/or developed in this direction, so that Omega’s entire range of models will be amagnetic. Industrialization is already fully underway. At the Omega head office in Biel, the estimate is five years. By then, all the company’s model lines will have been converted.

This may read like a science-fiction novel today, but it is soon going to pose serious problems to Omega’s competitors. Until now, the topic of magnetism has received scant attention, for good reasons, and only a few exasperated employees of all watch brands have much to say about it. But all that is soon going to change: just wait and see what happens when the Omega worldwide communication and advertising machine starts up and brings this aspect into full focus. Then the joke will be over! This unique selling point is going to persuade very many buyers to opt for an Omega. Its respected competitors are going to break out in a real cold sweat, even Omega’s gigantic rival, Rolex.

The Swatch Group has handed Omega a gift beyond price. It is a revolution in watchmaking, however ingeniously the competition may play it down. And a further point: It is going to be very difficult to improve the classic mechanical watch again in this way in the long term. The chroniclers of the future will write that it was Omega that accomplished this revolution.

Taken from my post published the 17th January this year, I again invite you to listen to the interview with Jean-Claude Monachon, Omega VP and head of product development. And PLEASE do also discover what role I personally played in the development of this new movement and antimagnetic technology… 🙂

These two videos, also taken from my post from the 17th January this year, show what happened when we “stressed” the new Omega “Seamaster Aqua Terra >15 000 Gauss” with a magnet with a strength of 5000 Gauss…

16 replies on “How Omega Defeats the Mechanical Watch’s Enemy No. 1”