Jack Heuer is the man behind the today’s iconic watch. This is the story of the Carrera and these are the 2013 TAG Heuer Carrera watches

In 1963, Jack Heuer, the man responsible for some of the most groundbreaking advances in sports timekeeping, turned his attention to the specific needs of professional motor-racing drivers. A long-time fan of and participant in the sport, he knew exactly what was needed: a wide-open, easy-to-read dial and a shock-resistant and waterproof case tough enough for even the most intense road wear. He also had in mind the ideal inspiration: the “Carrera Panamericana Mexico Road Race”, the world’s most grueling open-road endurance competition. 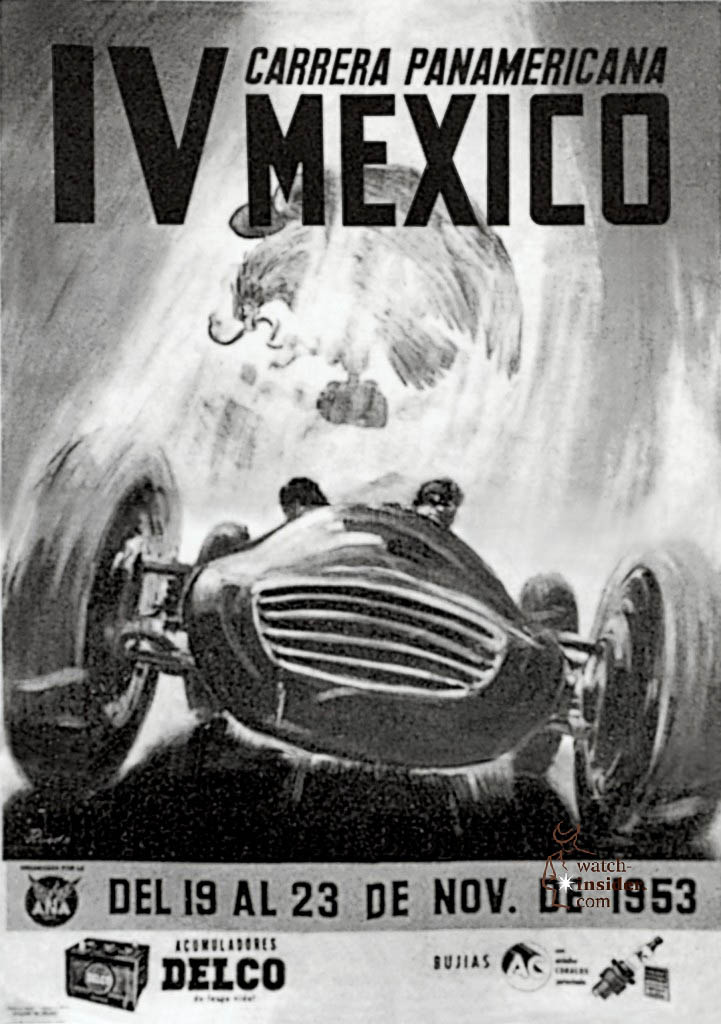 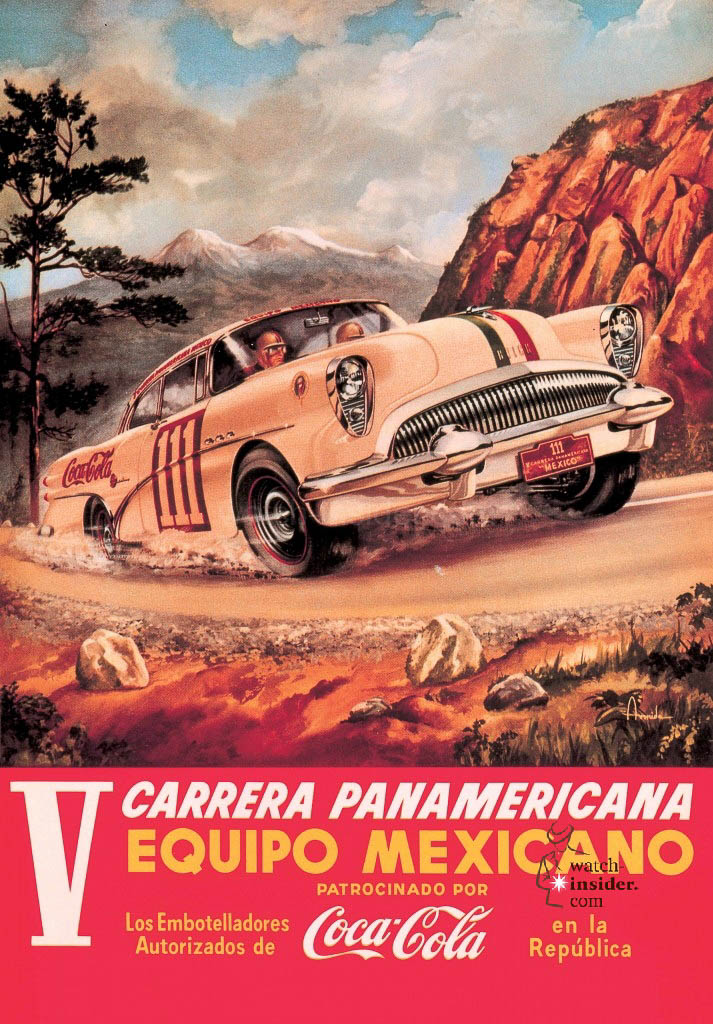 Jack Heuer: “I first heard about the Carrera from Pedro Rodriguez at the Twelve Hours of Sebring, where I was the Official Timekeeper. He and his brother Ricardo were two of the fastest, smartest and bravest endurance drivers of all time. To hear them talk of the Carrera, which our brand’s longtime friend Juan Manuel Fangio had won in 1953, but which had been stopped in the 1955 after a number of fatalities, made my imagination soar. Just the sound of the name itself – elegant, dynamic, easily pronounced in all languages and charged with emotion. I knew then that my new chronograph was the perfect tribute to this legend.”

He knew what the look and feel of the watch should be too. Inspiration came from a range of innovative ideas, including many from early 60s modernism – the geometric purity of Oscar Niemeyer’s new architecture, for example, and the curving, sensual lines of an Eero Saarinen building or chair, and the clean, uncluttered aesthetics of Pop-Art. At the same time, the Carrera’s iconic design values are firmly rooted in the enduring codes of motor sports, such as the black & white of vintage dashboard counters or the perforated leather gloves favored by Juan Manuel Fangio and his contemporaries. 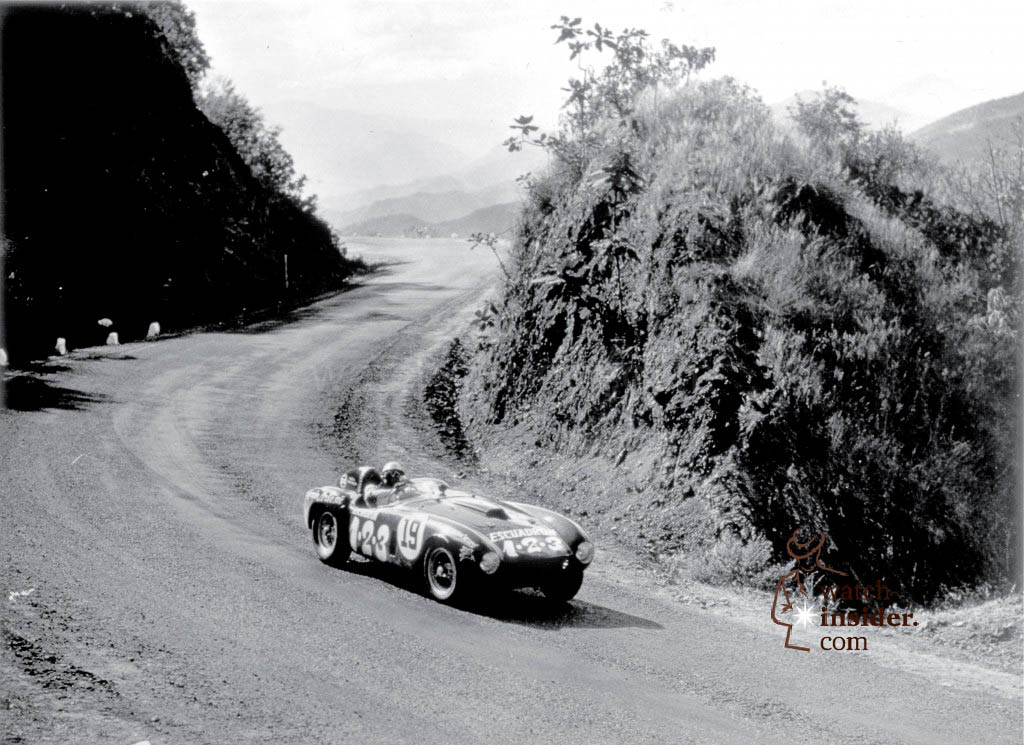 Jack Heuer: “I was excited by the new forms, materials and techniques just then coming into play. We were after something that took advantage of these, that was just as new and audacious, but at the same time sober, simple and motorsports-driven, stripped of all ornamentation, classic and timeless.”

The first Carrera chronograph was the stunning black and white “Panda” edition with tachymetre. An instant must-have watch of the top racecar drivers in Europe and America, it is now one of the most coveted watches among luxury watch collectors.

Then, in 1969, the patented Carrera Chronomatic Calibre 11, the world’s first automatic chronograph was unveiled, changing the course of watch design. The name – a combination of the words “Chronograph” and “Automatic”, is among the most fabled in Swiss watchmaking history. Equipped with a 12-hour and a 30-minute counter, and the famous oscillating pinion invented by Edouard Heuer in 1887, the chronograph was outfitted with a special patented excentric regulator setting and moveable spiral block, which allowed for very precise regulation and the smallest error in the timing, even under the most extreme conditions.

During the 1970s “Quartz crisis”, the Carrera not only survived, it excelled, with a series of popular quartz editions that demonstrated the brand’s continued preeminence as a pioneer in the Digital Age.

Among the star pilots to wear a Carrera over the next decade were Ferrari drivers Niki Lauda, Jackie Ickx, Clay Regazzoni, Mario Andretti, Carlos Reutemann and Jody Scheckter. Every member of Ferrari’s 1970s ‘scuderia’, with whom Heuer had signed on as Official Sponsor and Timekeeper, received a solid gold Carrera engraved with his name and blood type. 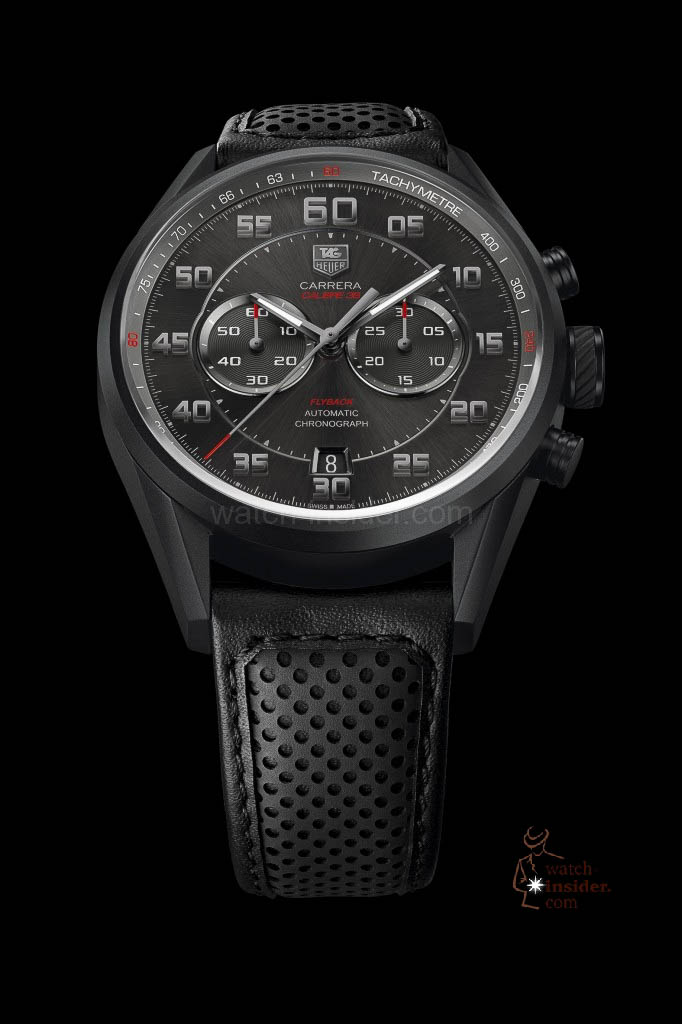 The new standard-bearer of classic Carrera sportiness Four other flyback chronographs are part of the new TAG Heuer Carrera collection, each a showcase of TAG Heuer design and finishing. The unique double-scale dial design is directly inspired by vintage Heuer stopwatches, with a large external scale (in silver or black depending of the model) for at-a-glance viewing of chronograph seconds. Hours and minutes are indicated on the anthracite sunray internal part, which is highlighted by the small second counter at 9 o’clock, the chronograph minutes indication at 3 and the date at 6. The subtle finishes pay tribute to the 36,000 beats per hours frequency of the Zenith El Primero movement. 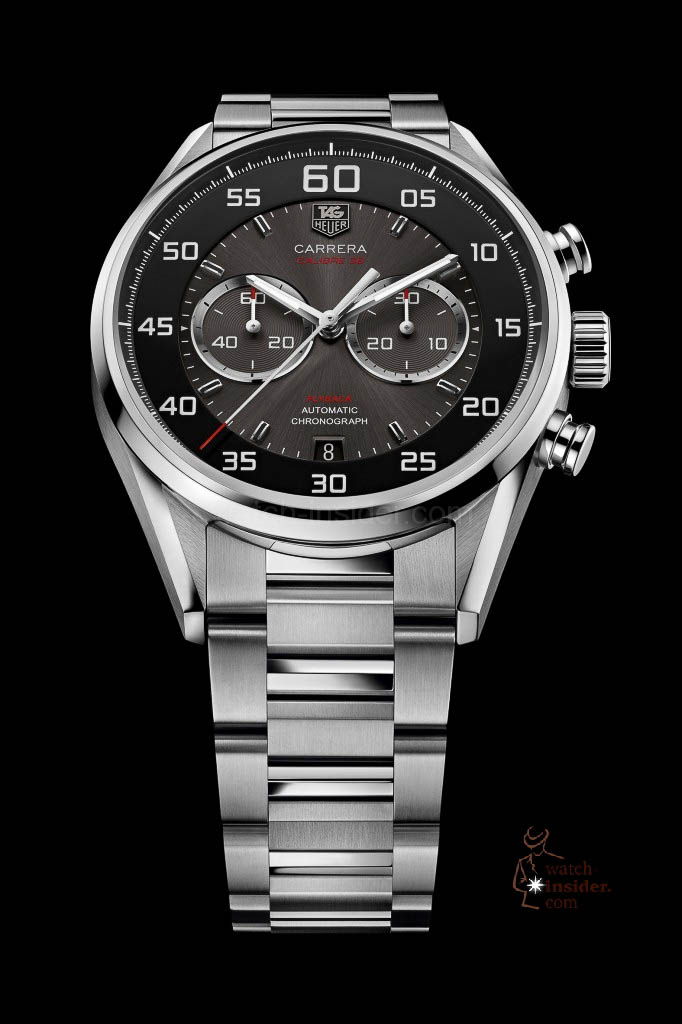 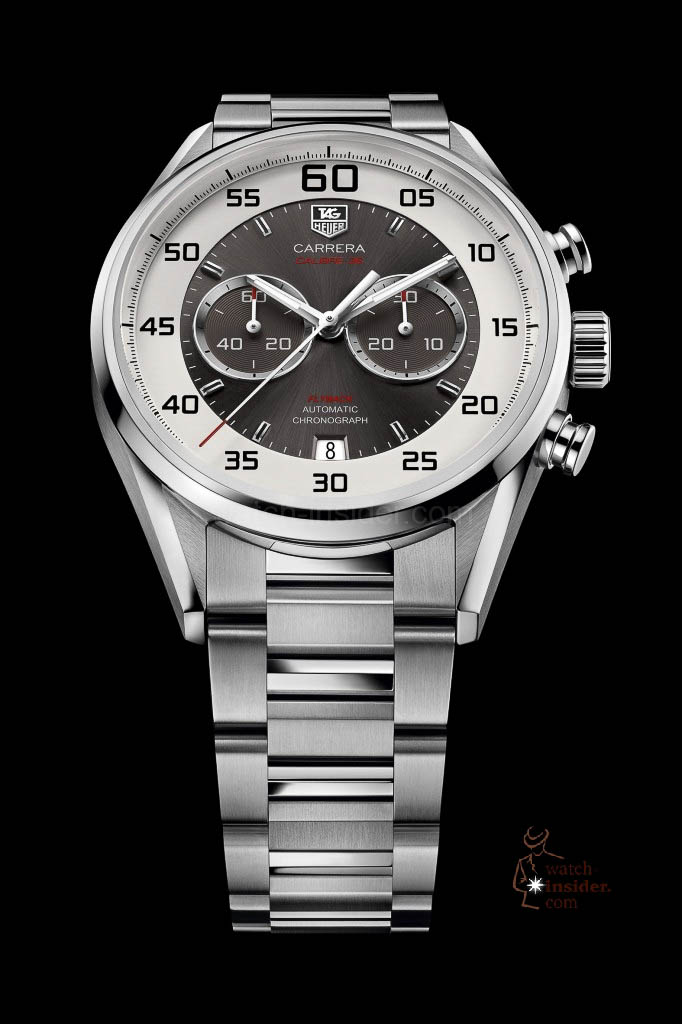 The two editions of the Carrera–one vintage, the other avant-garde, celebrate the 80th birthday of TAG Heuer Honorary Chairman Jack Heuer. The first was designed by Jack Heuer himself and produced in a limited edition of 3,000 pieces. The second draws its inspiration from the groundbreaking Mikrogirder and Jack helped with the design. The editions are inspired by the original 1963 Carrera with leading-edge technical details from motor racing and aeronautics. The first version has a TAG Heuer logo on its anthracite gray-inside-black dial, and the audacious 39-jewel Calibre 1887 automatic chronograph movement inside; the second has a vintage red Heuer logo on its anthracite dial, overtop a 37-jewels Calibre 17 automatic chronograph movement. The leather strap on the the Cal 17 edition is perforated black with red lining; the Cal 1887’s is solid black with a red back. Red second hands and red-tipped counter hands bring extra dram to the look. Date windows are at 6 o’clock, the counters at 3 and 9. 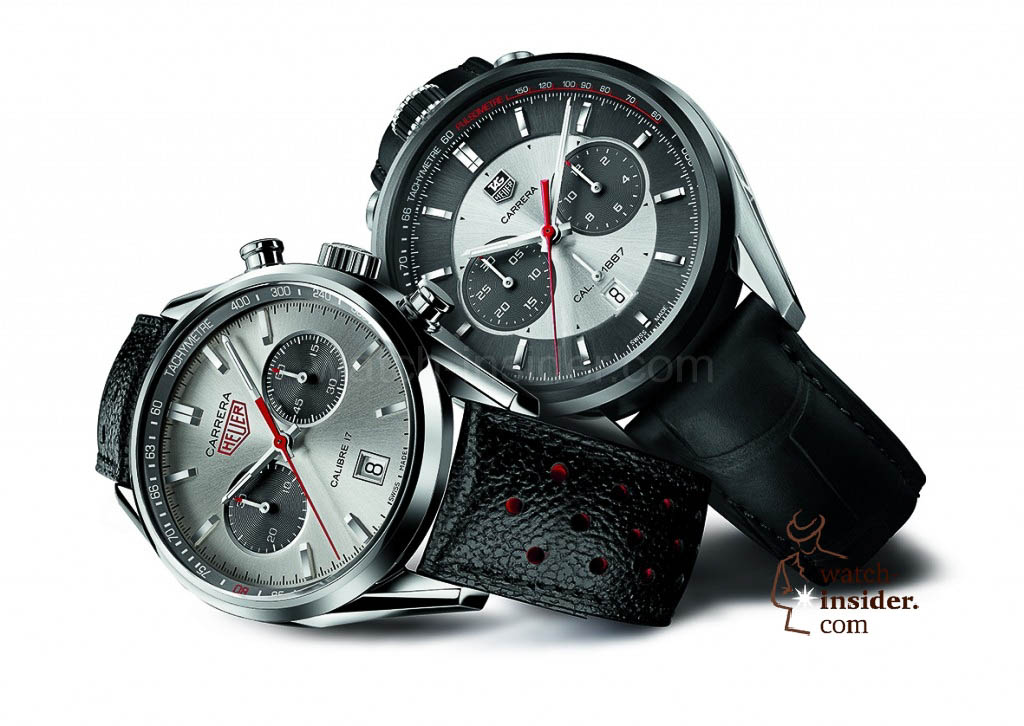 Sporting elegance with true motor-racing pedigree The TAG Heuer Carrera’s unrivaled motor-sports heritage shines forth in this sleek, modern edition of one of the bestselling CARRERAs. Loaded with features–full day of the week and day of the month display, three chronograph subdials and a 41mm bezel with tachymeter scale–the overall look is reminiscent of a classic racecar dashboard. Five-row steel for the bracelet, alternating fine-brushed and polished finishes and fastening with a solid steel folding clasp. Water resistant to 100 meters, the dial is protected by a domed, scratch-resistant sapphire crystal treated with a double-sided, anti-reflective coating for better readability. The oversized crown and pushbuttons echo vintage stopwatches. 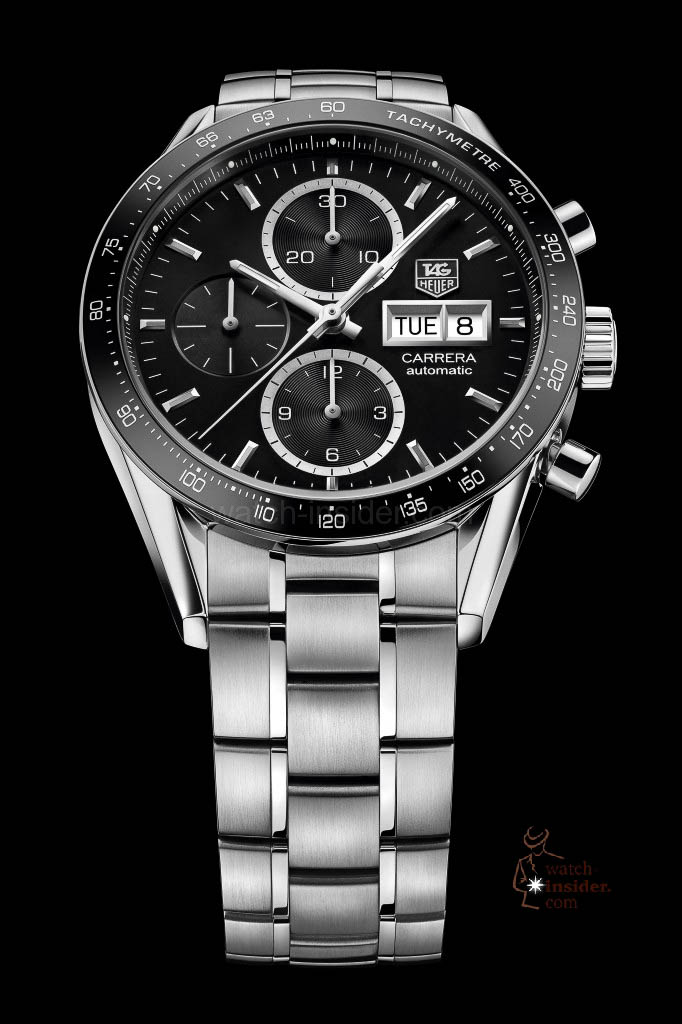 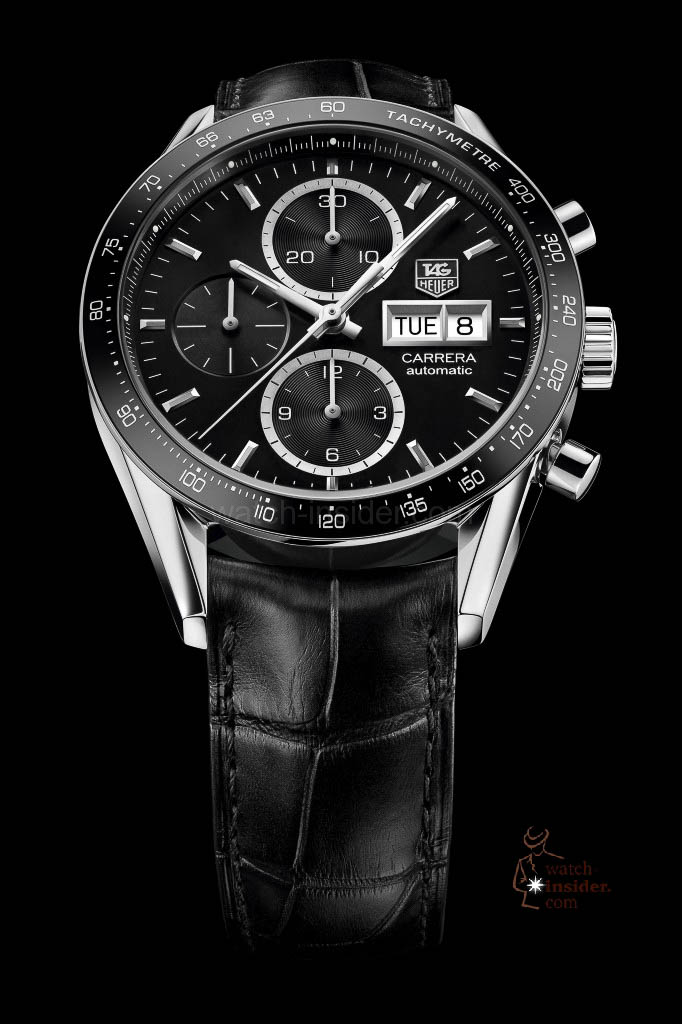 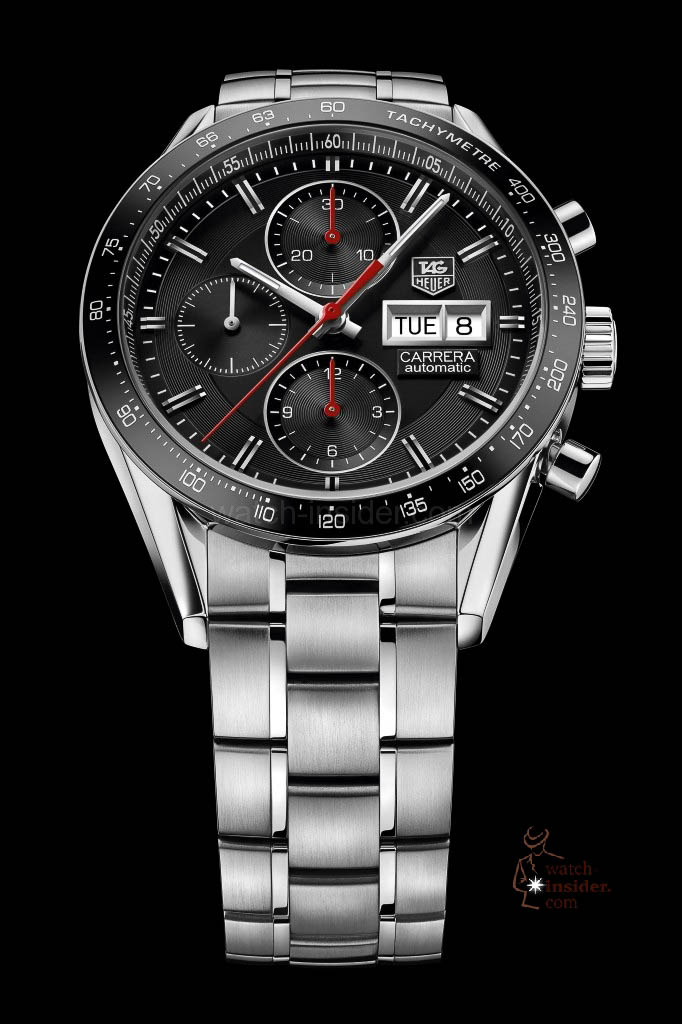 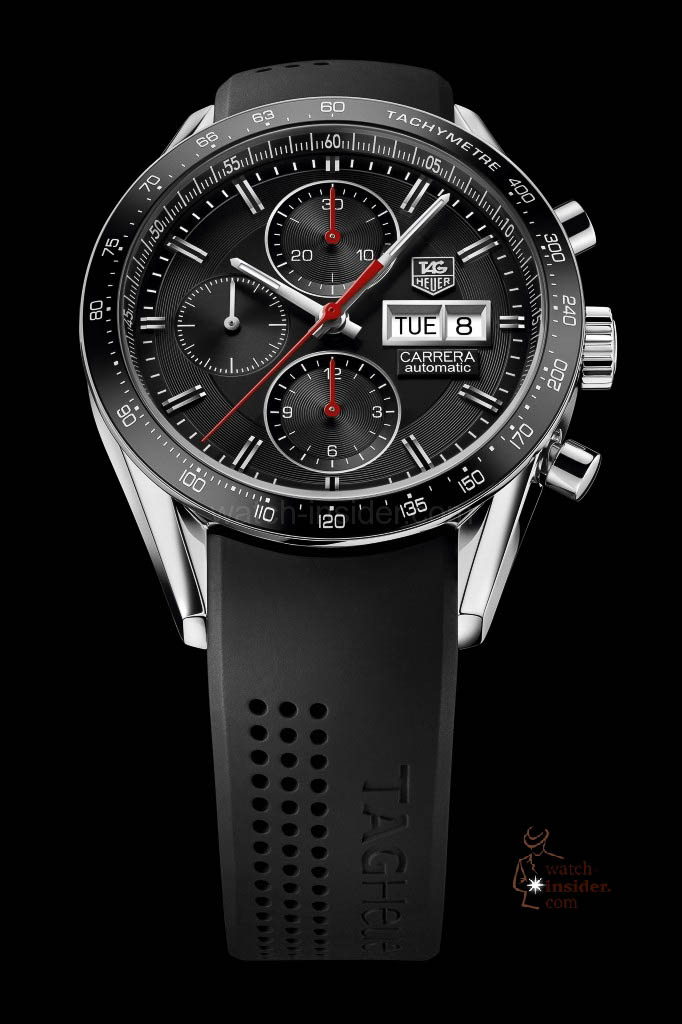 I unfortunately do not have the rights to publish my pictures of some old Heuer Carrera models through the web. So if you have pictures and you would like to share them with us, please send them to me and I will add them with the appropriate copyright here.