First introduced to the public in 1997 by Sinn, their first mission timer. An virtually unbeatable chronograph in terms of functionality and clarity, the EZM 1. Marked the ongoing development of a long range of mission timers for professional users in titanium. First users were the officials from the newly established German Central Customs Support Group. Better known as the “ZUZ”  which means Zentrale Unterstützungsgruppe Zoll. They are a special unit assigned to the German Customs Investigation Bureau, much like a special police commando unit. As accurate time measurement is essential for them during sometimes extremely tricky operations, the officials opted for a highly robust chronograph with instrument-like precision. The number one requirement was the need for outstanding readability at a glance and under the most adverse conditions. The EZM 1 was thus the result of a direct collaboration between users and Sinn. Marking the 20th anniversary of this mission timer, Sinn presents the EZM 1.1 Limited Edition, continuing the tradition of the EZM 1. 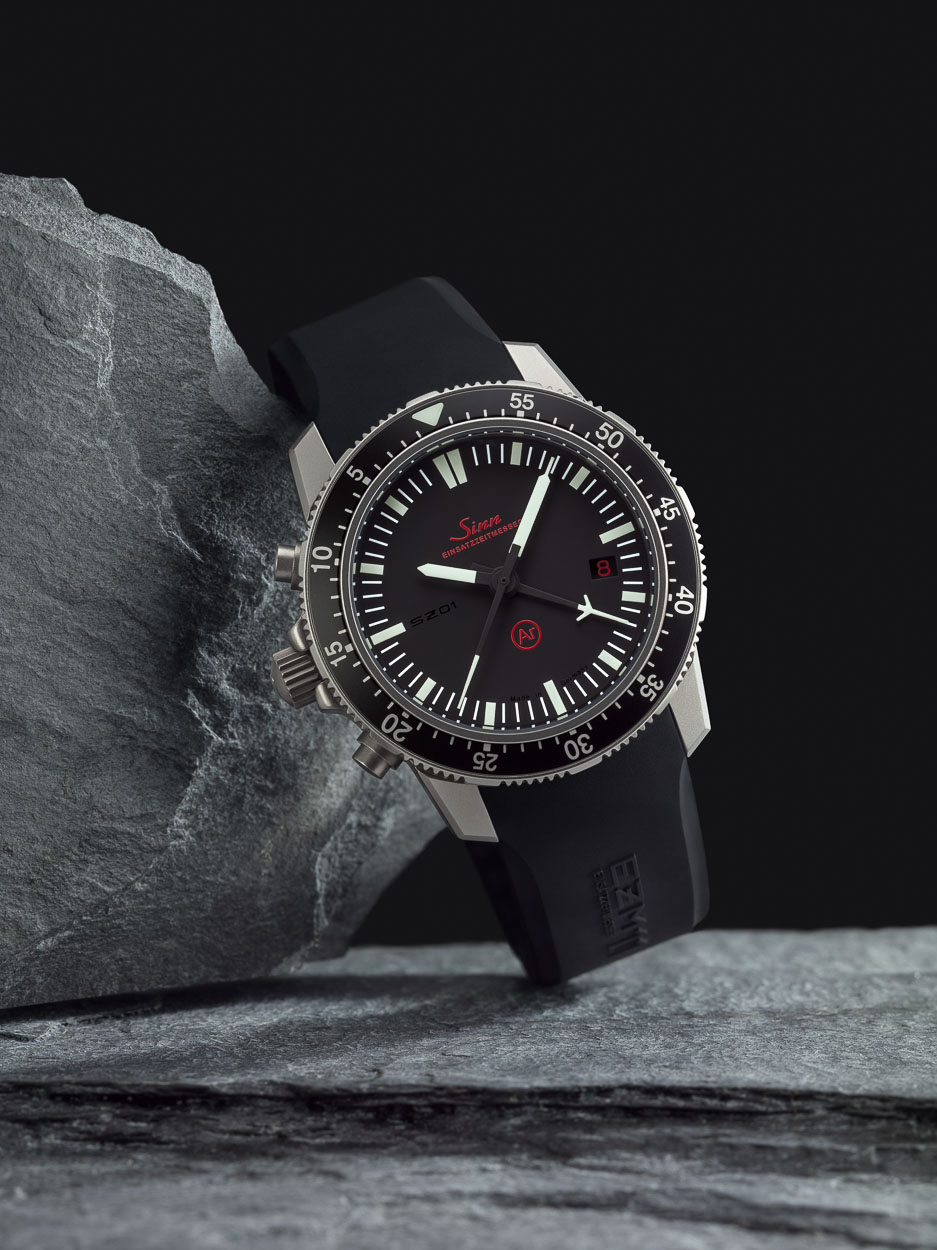 One special feature of the chronograph is the crown and push-piece on the left side of the case to prevent pressure on the back of the hand and keep the watch from getting caught, even in time-critical situations. The SZ01 chronograph movement developed in house and used in the EZM 1.1 Limited Edition is based on the tried-and-tested Valjoux 7750 and designed in such a way that the watch has a centre-mounted, jump 60-minute stop hand. This makes it even easier and quicker to record stop times more accurately. The new design is modelled on the clear and precise readability of the renowned Lemania 5100 movement, which is no longer available. In terms of readability, the SZ01 offers two advantages: 60 minutes – rather than the usual 30 minutes – are counted in one sweep of the hand and the minute stop scale covers the entire diameter of the dial. In addition to the chronograph function, the pilot’s bezel can be rotated on both sides and used to record cumulative time. The captive countdown bezel features minute ratcheting. To further aid readability and recording of the time, all markings on the dial not relevant to the mission are muted in red. 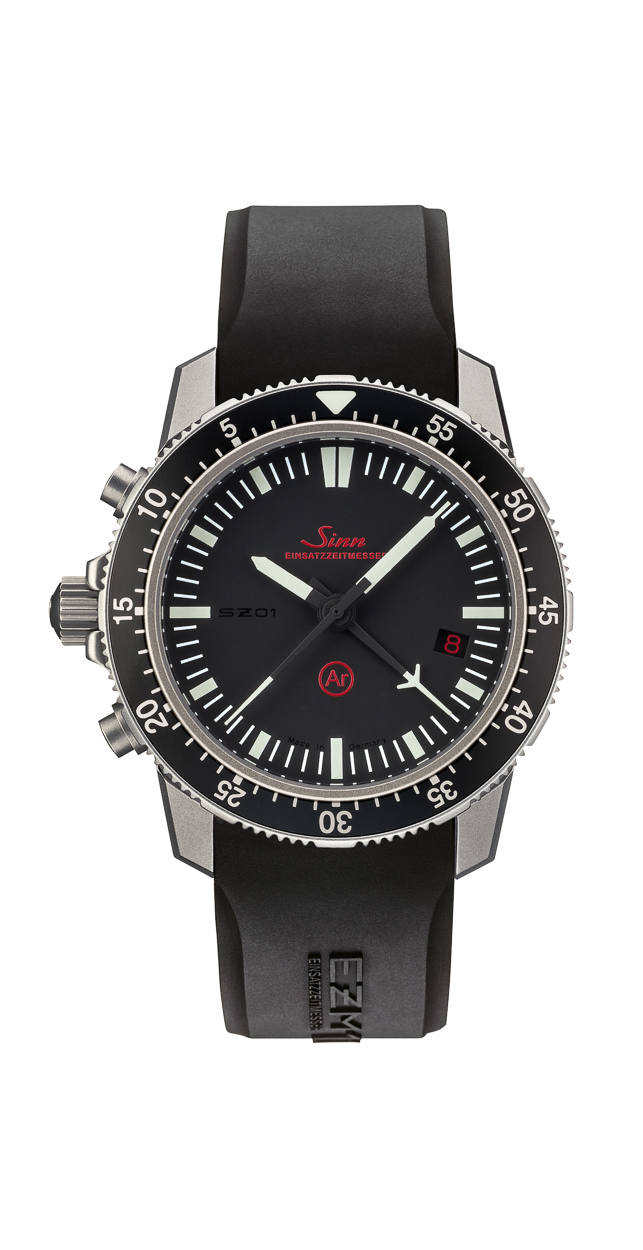 Professional users must be able to rely on their equipment even in the toughest conditions – and the same applies to their watch. Sinn Spezialuhren EZM 1.1 Limited Edition features a range of technologies. For example, Temperature Resistance Technology ensures reliable function at a temperature range of –45°C to +80°C while Ar-Dehumidifying Technology ensures greater functional reliability and freedom from fogging. The case itself is made of bead-blasted stainless steel, giving it a matt silk finish which prevents distracting reflections. The surface of the case has also been hardened using TEGIMENT Technology, making it especially scratch-resistant. The mission timer celebrates 20 years Wristwatches are also an important piece of equipment for other professionals. In addition to the aforementioned ZUZ, these include pilots, divers, firefighters, emergency doctors, rescue workers, special units of the German police force such as the GSG 9 and Germany’s commando frogman force KSM (Kommando Spezialkräfte der Marine). It is for these professional users, who are very often deployed to protect their fellow citizens, that we have been developing mission timers for the past 20 years. From the EZM 1 to the EZM 16, all watches are strictly designed to meet the demands of a defined mission. 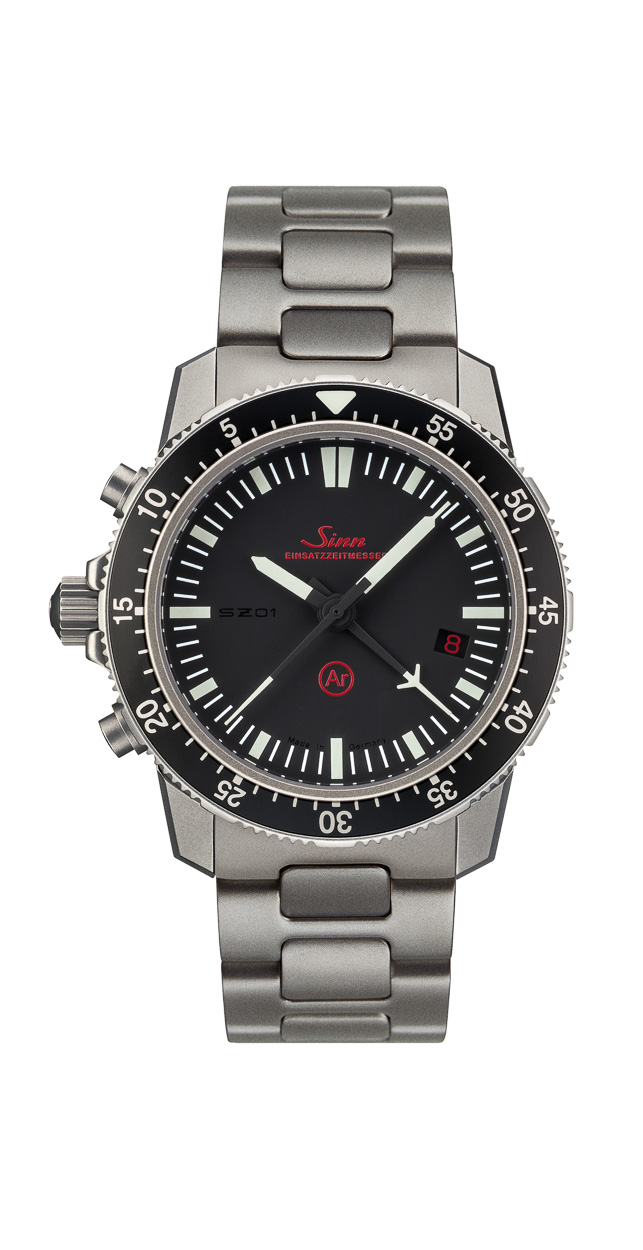 The principle on which the Sinn mission timers are based originates from architecture where form follows function. But it has also gradually been applied to product design in general. According to this principle, the design should be based exclusively on its intended function or purpose and incorporate new materials and technologies. In this respect, Sinn has gradually become a technology and case expert. Manufacturing and fitting their mission timers with the best possible materials and components.

The use of modern technologies and materials is thereby not an end in itself, but rather a result of widely varying operational conditions. Each mission timer has been developed for a specific user group with highly individual requirements when it comes to their watch. Sinn mission timers must be able to withstand the most varying, challenging and complex external conditions, including wetness, magnetism, extreme heat and cold, major changes in temperature, vibrations, impact and knocks as well as aggressive liquids such as salt water or disinfectant. And often enough, everything at once. Basically, these watches have to withstand a great deal – especially when the going gets tough.

Key to ensuring such functionality when developing these timepieces is the cooperation with experts in the respective fields. Which are those actually using and relying on high performance timepieces out in the field. Quite often these experts are faced with critical situations, where minutes and seconds become a matter of life and death. Both their own and other people’s. It is these users and even more so the respective conditions in which they operate that define and determine form and functionality. Many questions arise in the beginning: How can we better protect the watches? What will be required of the watch in extreme situations? What must it be able to withstand? Which functions are particularly important for this particular mission?

Consequently, no two mission timers are the same. Especially given the fact that each mission timer is equipped with functions relevant to the demands of its specific mission. Identical construction and design features are apparent, however. One general principle applies to them all: focus on the key essentials in terms of outstanding readability and rapid time-recording.