Time for a party as Urwerk so let’s take you on the ride! Back in March 1997, Martin Frei graduated from the College of Arts and Design in thw Swiss city of Lucerne. Shortly after he moved to New York where he joined other Swiss artists in founding the United Swiss Artists association. He was then living in Brooklyn — in a garret that soon became a creative hub. With Felix was in Geneva and Martin across the Atlantic. Their brainchild, URWERK, had been born but was struggling to take its first steps. Now, 20 years later they present the UR-105 CT Streamliner. 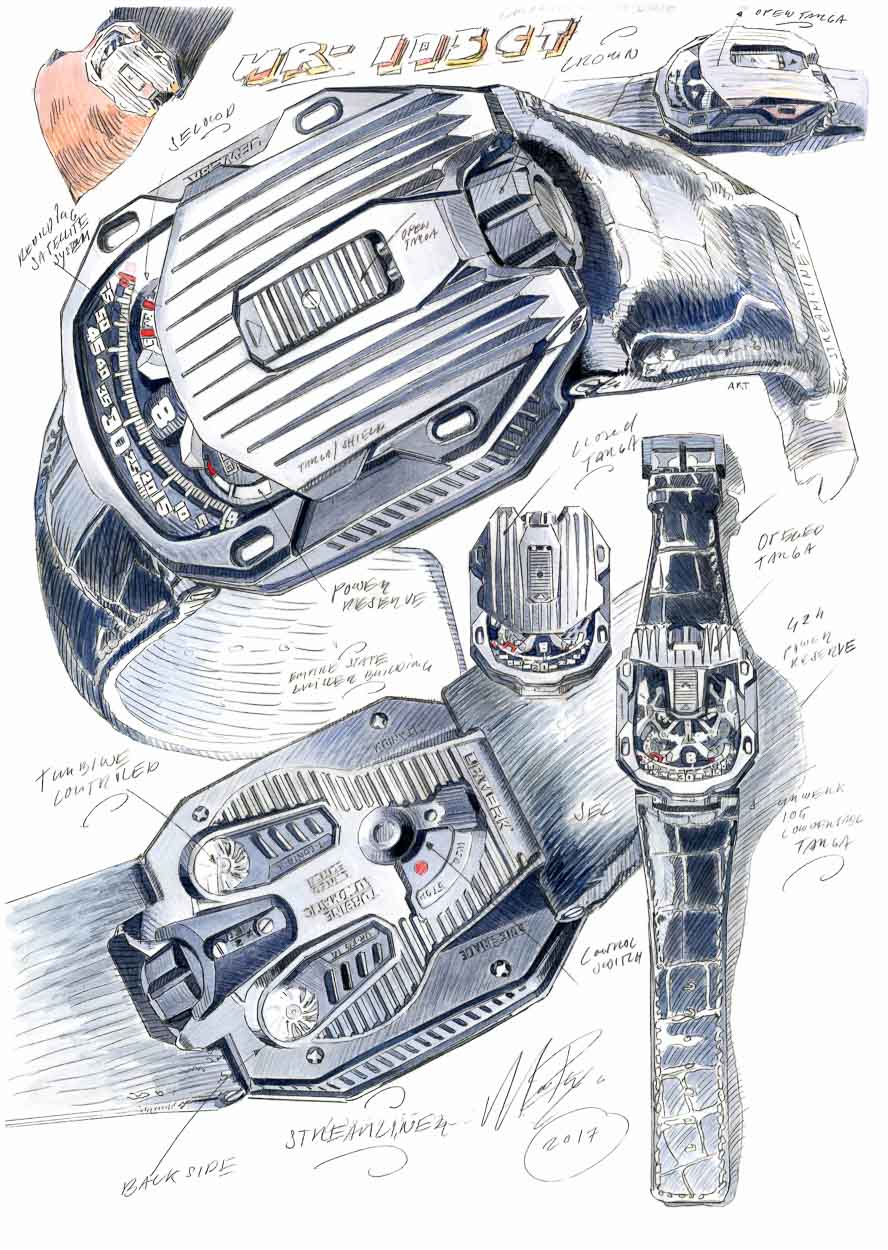 As the UR-101 and UR-102 were critically acclaimed but the company wasn’t viable. It’s founders just managed to keep it above water amid increasing misgivings. What did the future hold for URWERK? Should they persist with a dream that was eating up all their savings? With these questions in mind, Felix took a plane to New York to join his friend. Felix Baumgartner was 22, Martin slightly older. Together in the city of their dreams they wandered the streets, taking in the images of New York, its redbrick houses, its Art Deco skyscrapers and gleaming subway. These pictures filled their minds and would never leave them. 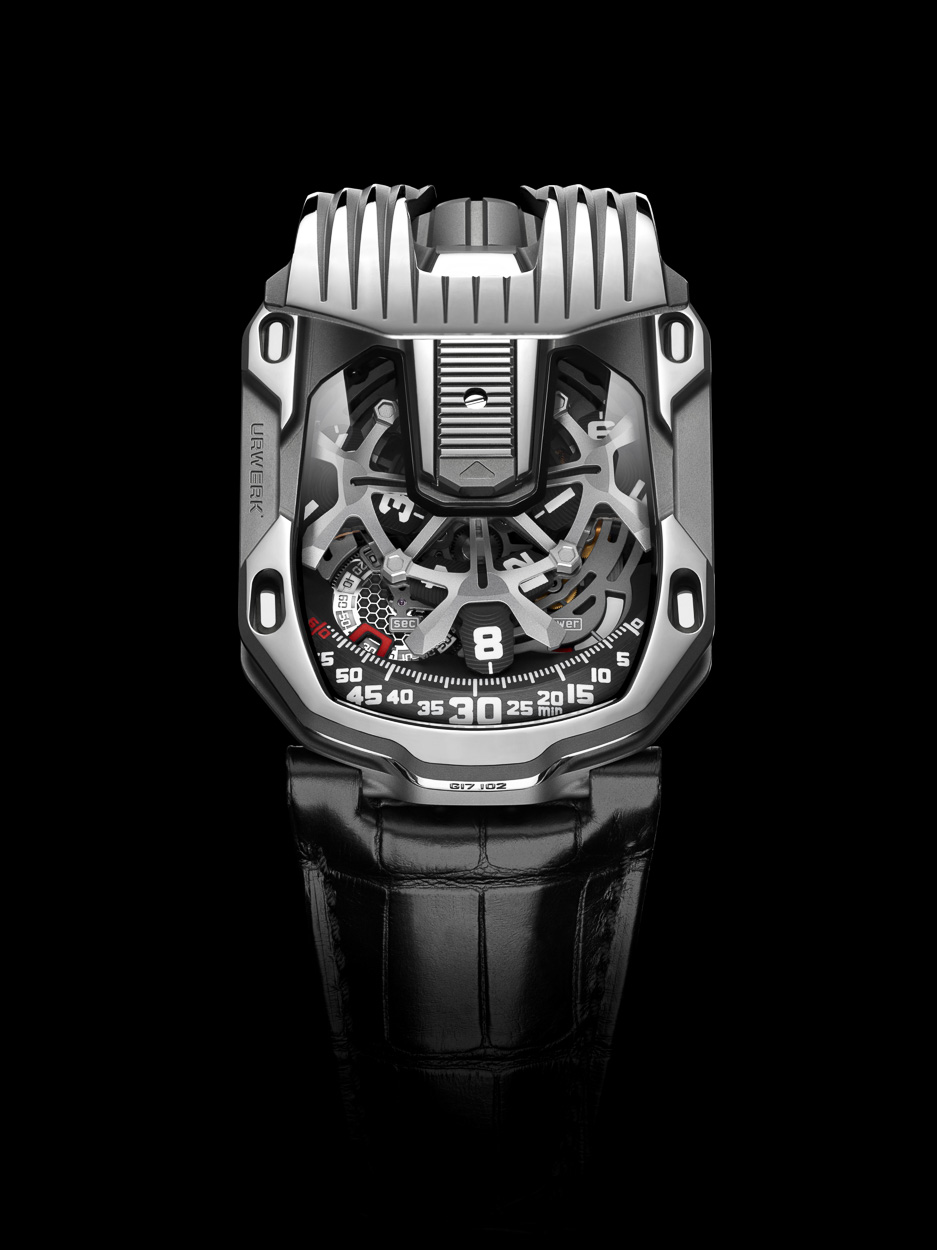 Twenty years have now gone by and URWERK is an established niche brand. Their dream has taken shape and come to life. And when Martin Frei and Felix Baumgartner look back to those days, their memories return on the drawing board and the workbench. Their American dream is now on their wrists as the UR-105 CT Streamliner. 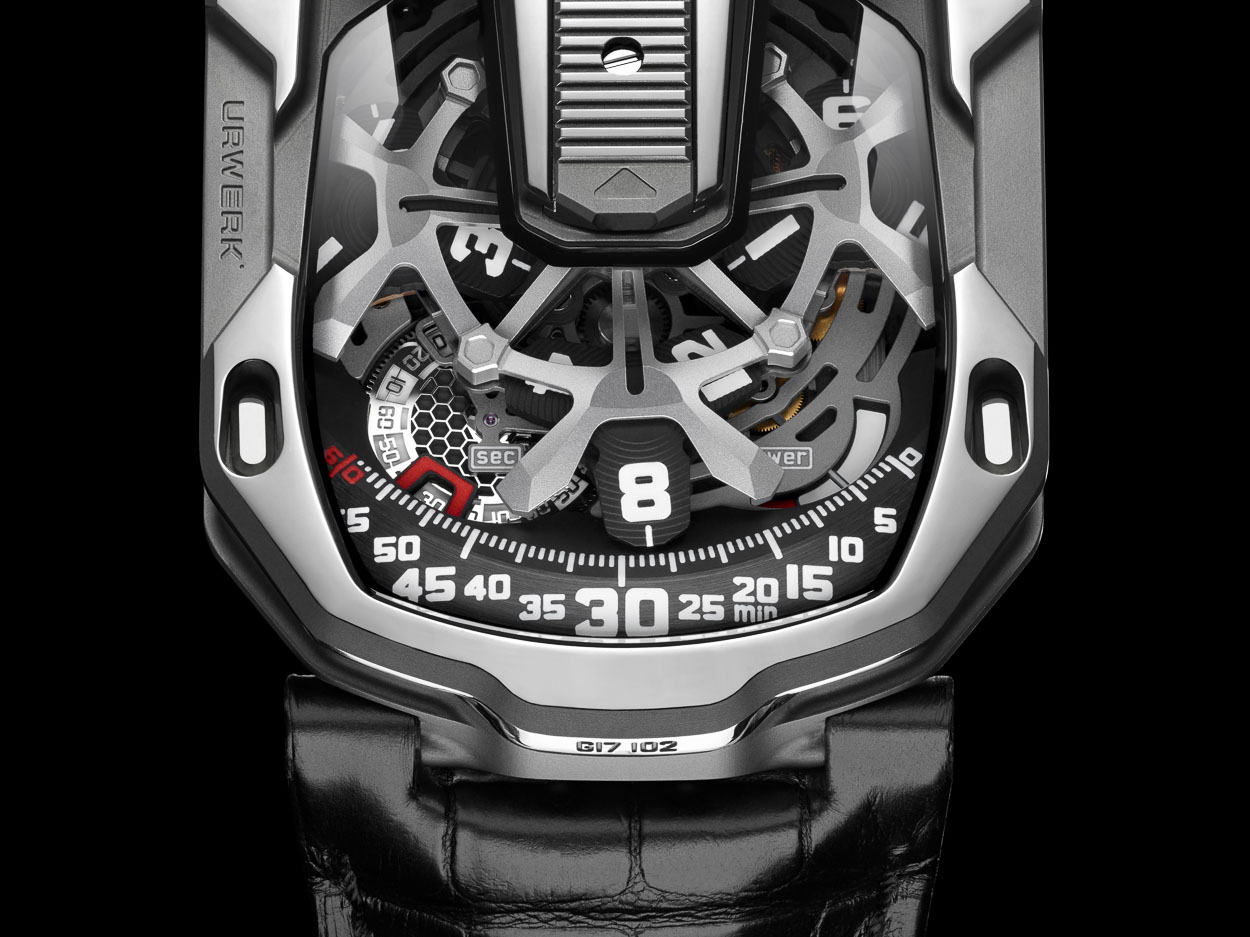 The UR-105 CT is first of all a beautiful object that fits snugly in the palm of your hand. Its unique shape is a remarkable octagon with deep grooves along its length. The Art Deco influences are apparent in its geometric angularity and symmetry. As Martin Frei explains, “the Streamliner has a minimalist design with few frills and clean lines. In the initial drawings, I thought of the Empire State, the Chrysler and the Comcast buildings. That is why it has that vertical structure that seems to go on forever.” 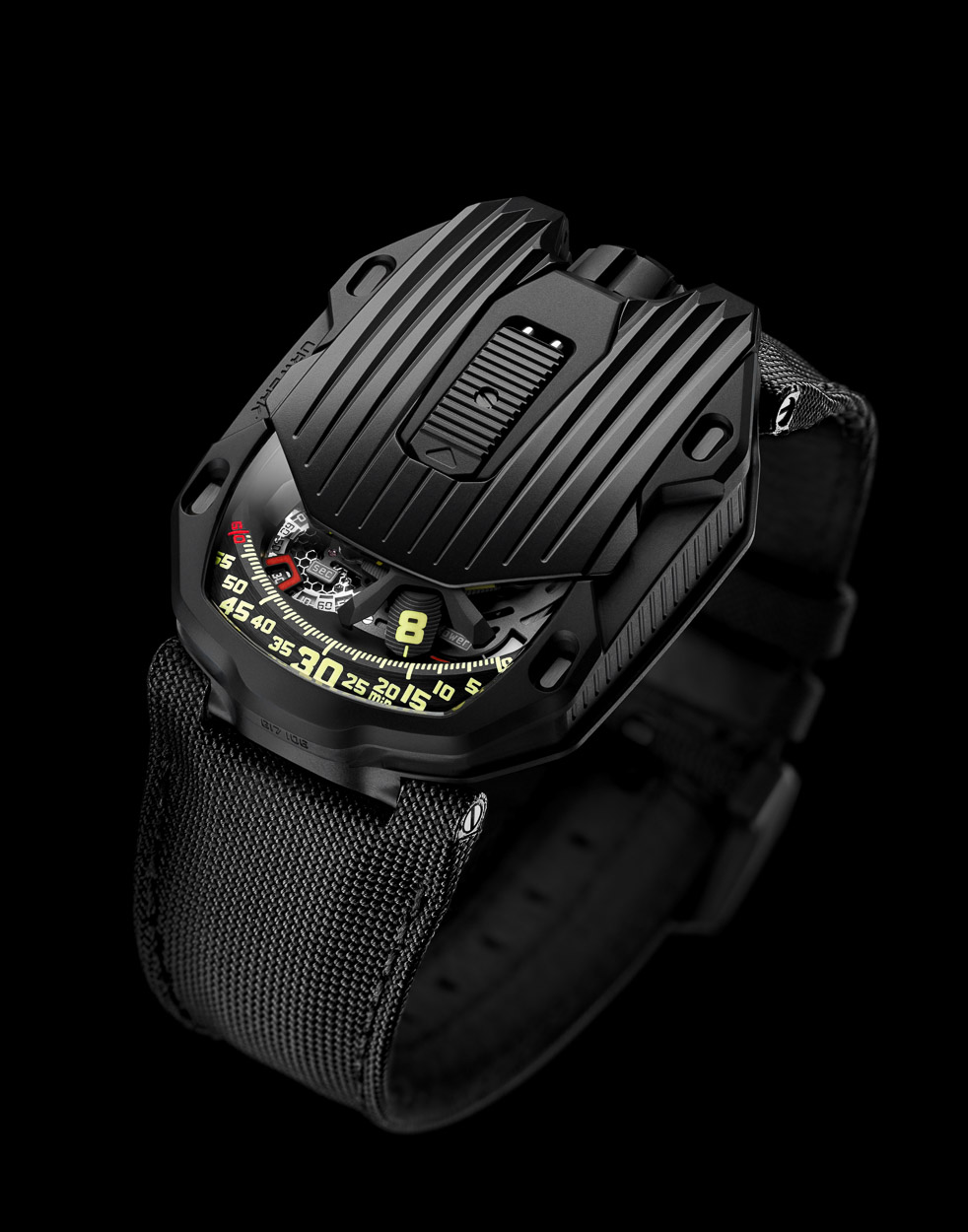 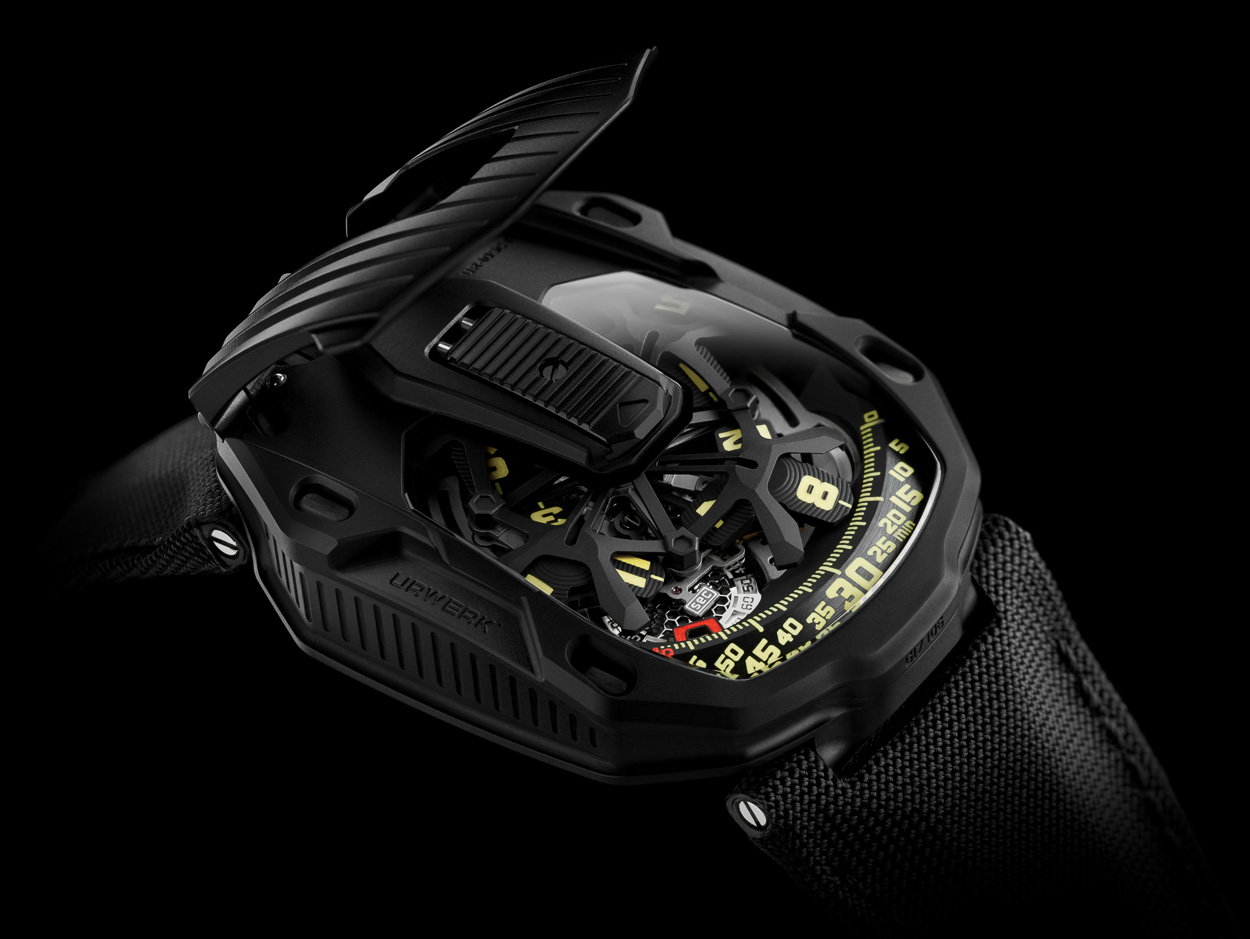 You have to slide the catch on the top of the case to reveal the mechanism of the UR-105 CT. It’s a new wandering hour indication based on an openwork carousel, which carries the four satellites, each bearing three numerals for the hours. The hours successively sweep past the minutes scale for an analogue and digital display of the time. According to Felix Baumgartner, Streamliner is an apt name for this watch. “The UR-105 CT is a watch with a flexible design. When it is closed, it looks austere, with only the time indication visible. Open the protective cover and you delve into a metallic environment that is quite cold, yet you perceive a notion of speed and an effort at efficiency. The Streamliner’s carousel has been completely redesigned, becoming lighter, stronger and far more effective.” 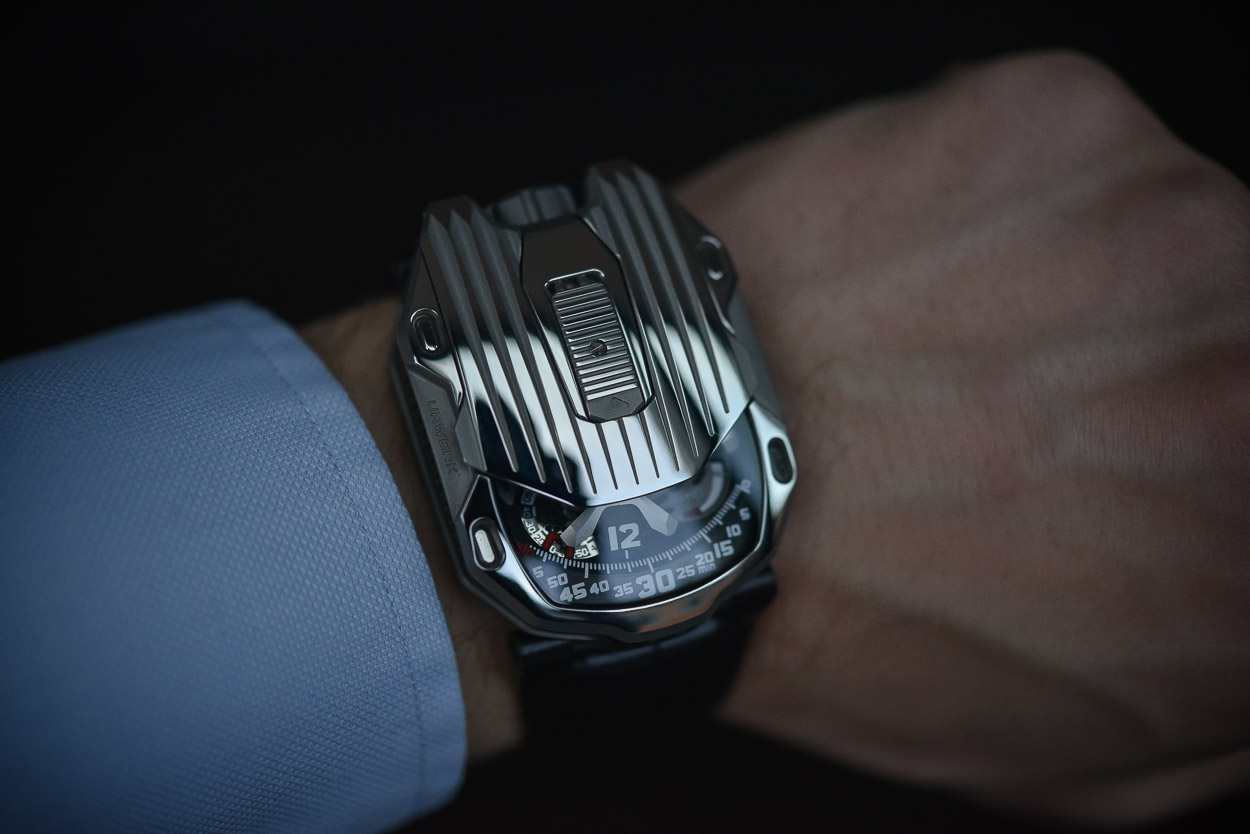 A power-reserve indicator and digital seconds make up the rest of the information displayed on the dial. The digital seconds are remarkable in that they indicate tens of seconds. The mechanism was made using a photolithographic process, with each marker openworked to make it as light as possible. It thus weighs less than a tenth of a gram.

Two pneumatic turbines on the back govern the selfwinding rate, which can be set with a lever. In the FULL position, the slightest movement of the wrist is harnessed to rewind the barrel spring. Turn the lever to STOP to disengage the selfwinding system and wind up the UR-105 using the crown. An intermediate position, RED (for reduced) engages the turbines to dampen the winding rotor and avoid overstressing the mainspring, if you are particularly active. 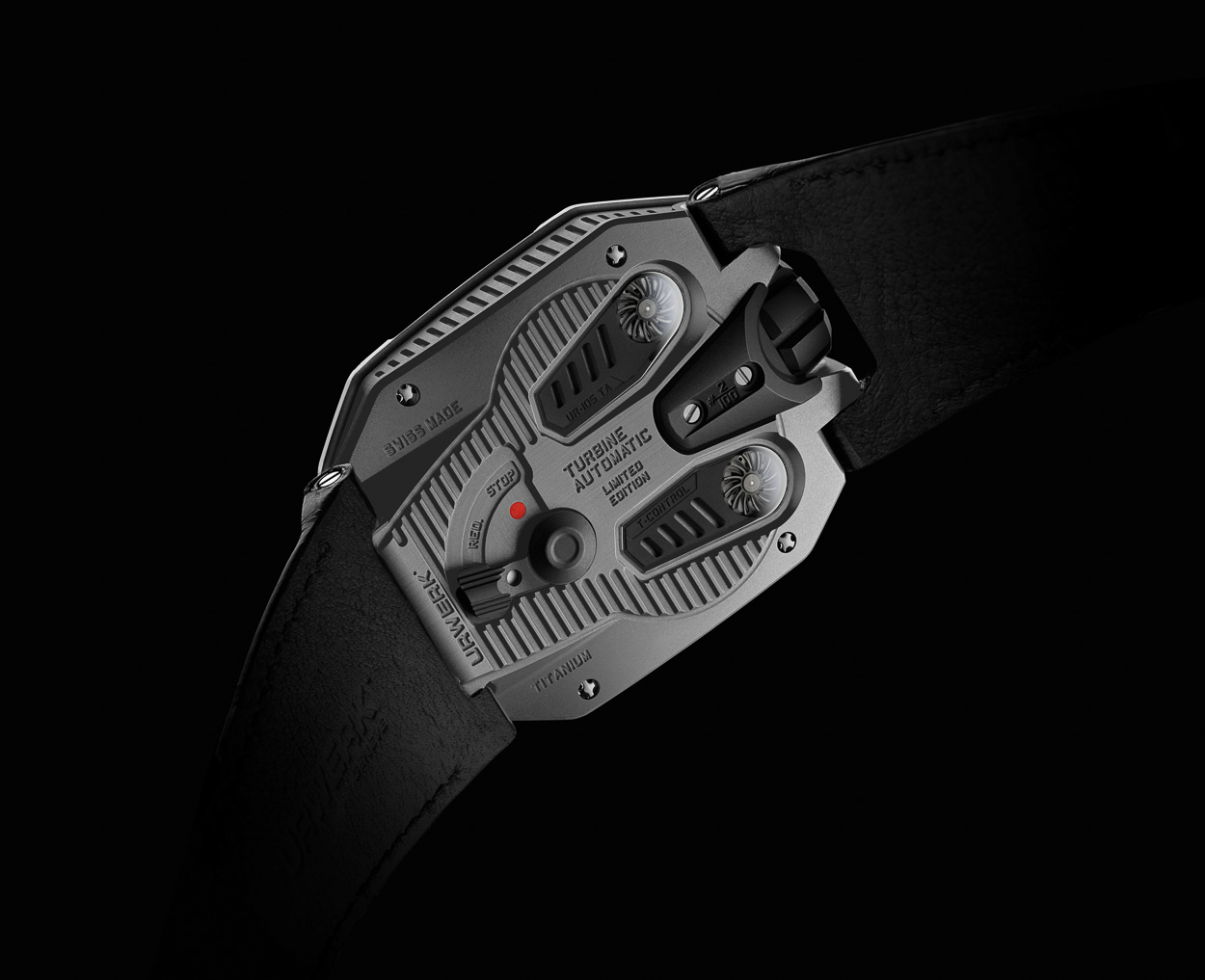 In the Streamliner, Felix Baumgartner and Martin Frei take you to the New York of their youth, a plunge into a city of different facets, from the top of the highest skyscraper to the depths of the subway.

0 replies on “Urwerk Presents the UR-105 CT Streamliner”